We Got Married Amid a Wildflower Field in the Sky

Due to flooding from Hurricane Ida, this couple moved their Fitler Club wedding to Vue on 50. 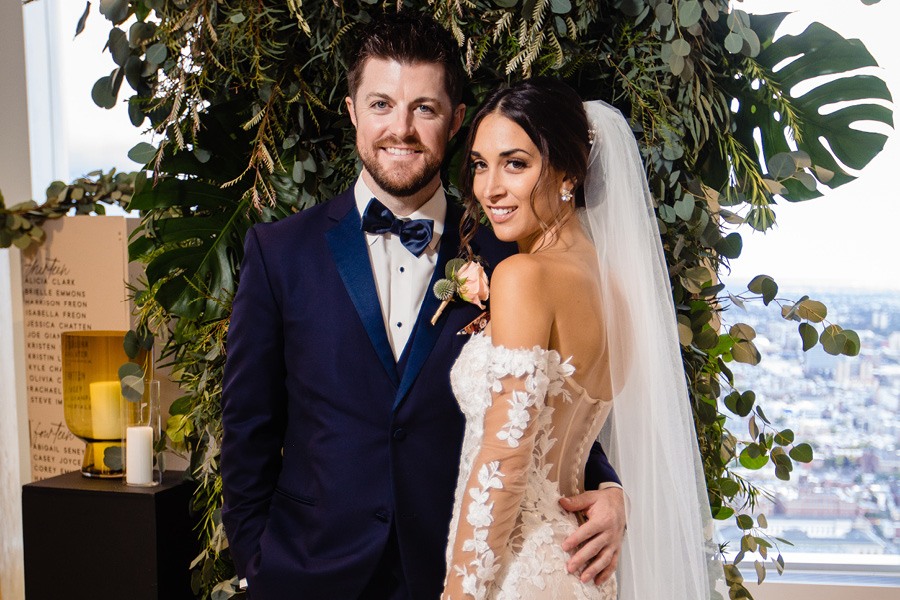 Alyssa Casey and Mike O’Rourke shifted their Fitler Club Big Day to a Vue on 50 wedding due to Hurricane Ida. Photography by Diamond Street Photography

Something will always go wrong on your wedding day — and in recent years, that thing has been the pandemic throwing a major kink in everyone’s plans. But for one recent couple, it wasn’t COVID-19; it was the impact of flooding from Hurricane Ida on their original venue. Rather than cancel, they simply picked up their Fitler Club wedding and held it at Vue on 50 instead. Diamond Street Photography documented the venue collab. Check it out below. 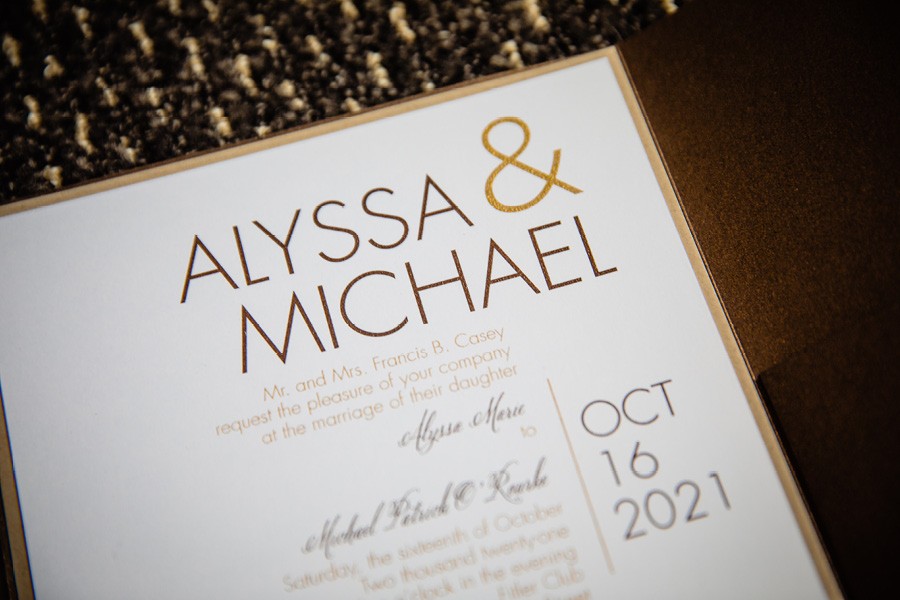 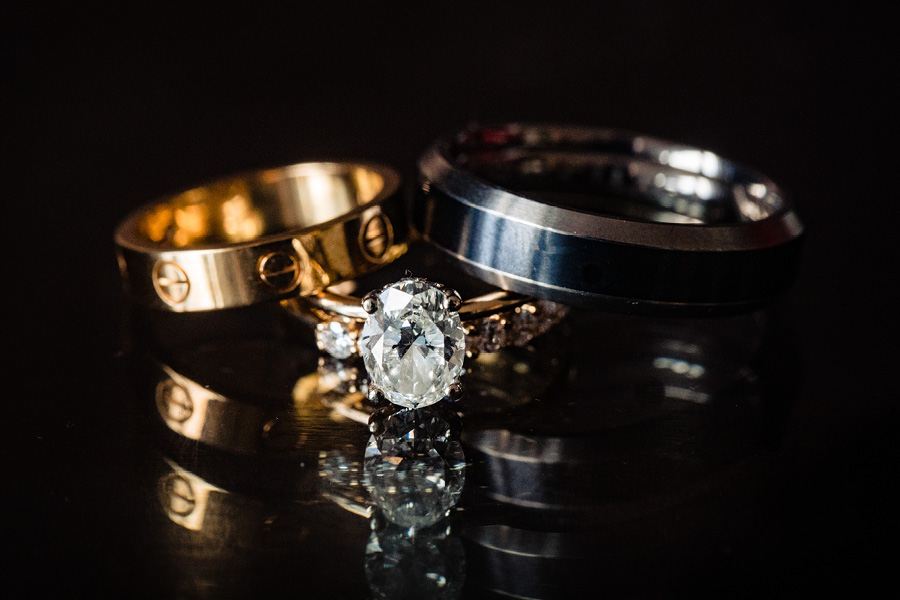 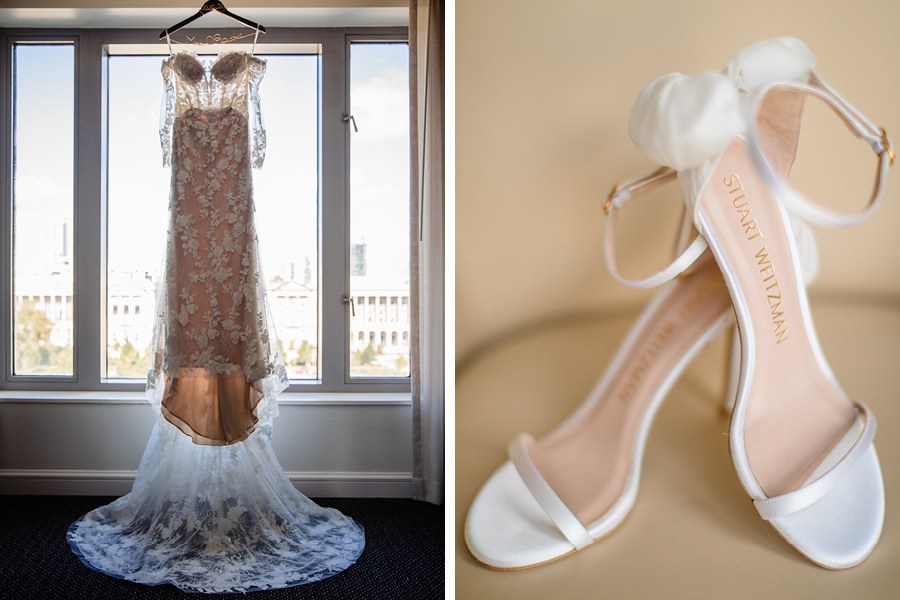 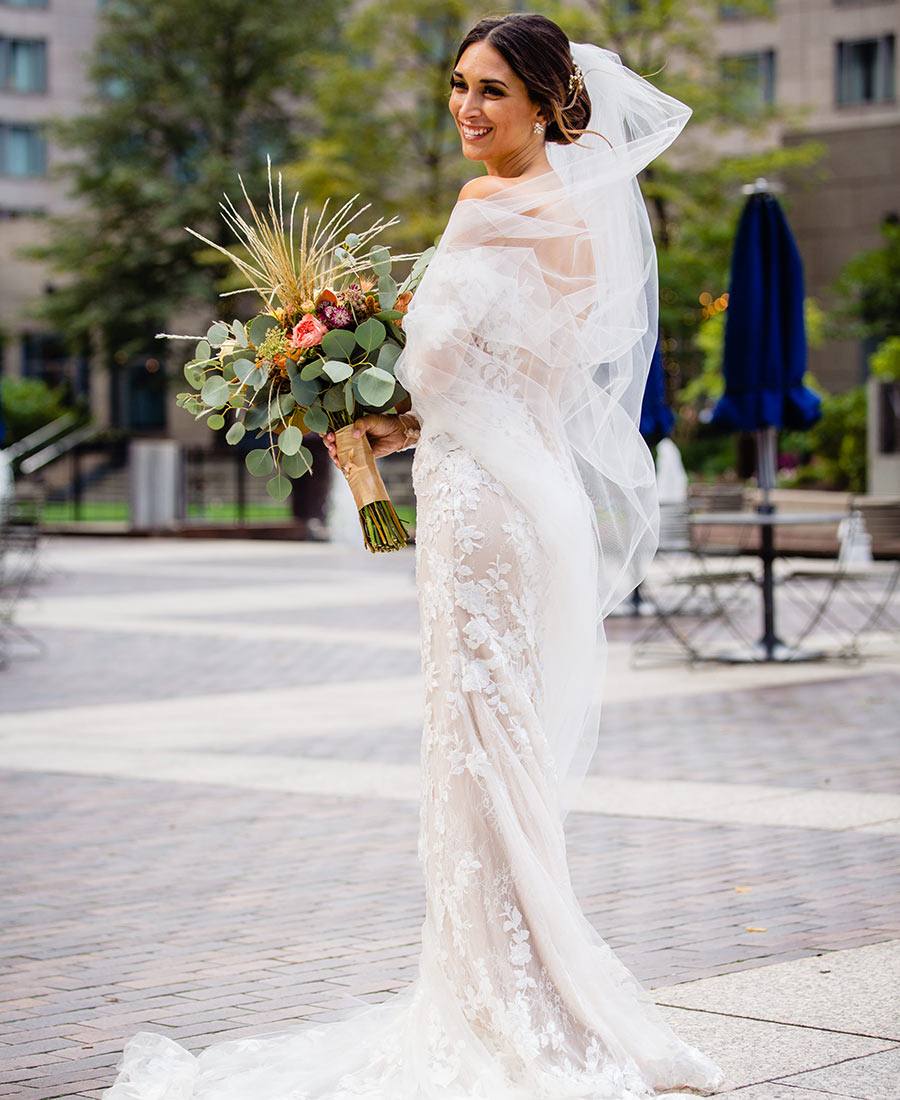 For this Marlton couple, it all began at Spencer’s Gifts’ corporate headquarters in Egg Harbor Township. Well, sorta: Margate native Alyssa Casey was a buyer, and Mike O’Rourke, who hails from Sicklerville, worked in marketing. They didn’t really interact much. But a few years later, Alyssa started liking Mike’s Instagram photos, he DM’d her (he sent a meme “by accident”), and they began texting.

Their first date: a weekend during Santa-Con in Fort Lauderdale, where Alyssa was living at the time. “I told him to book a flight and come hang out, and he actually listened,” she says. They dated for four years before getting engaged in Rittenhouse Square. And another 10 months after that, on October 16, 2021, they said “I do.” 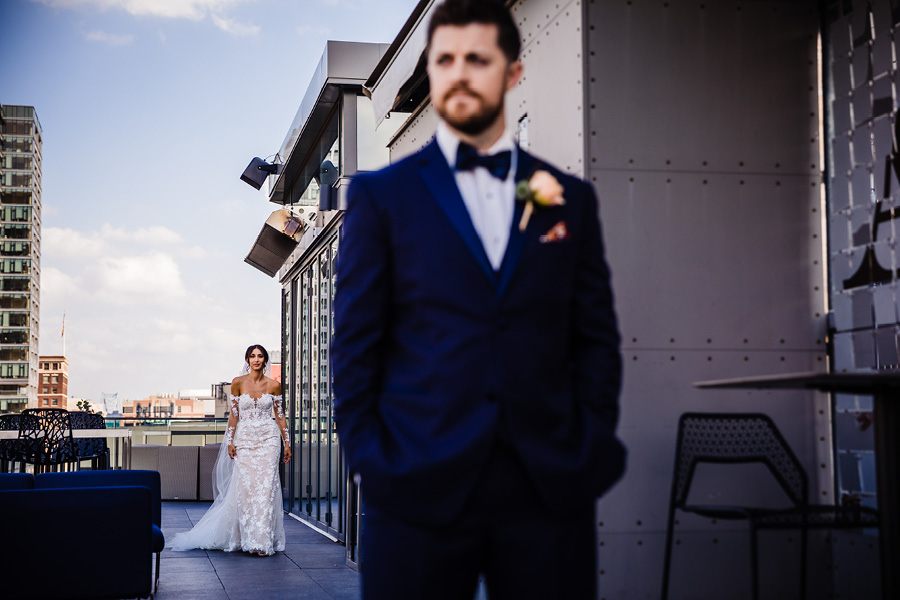 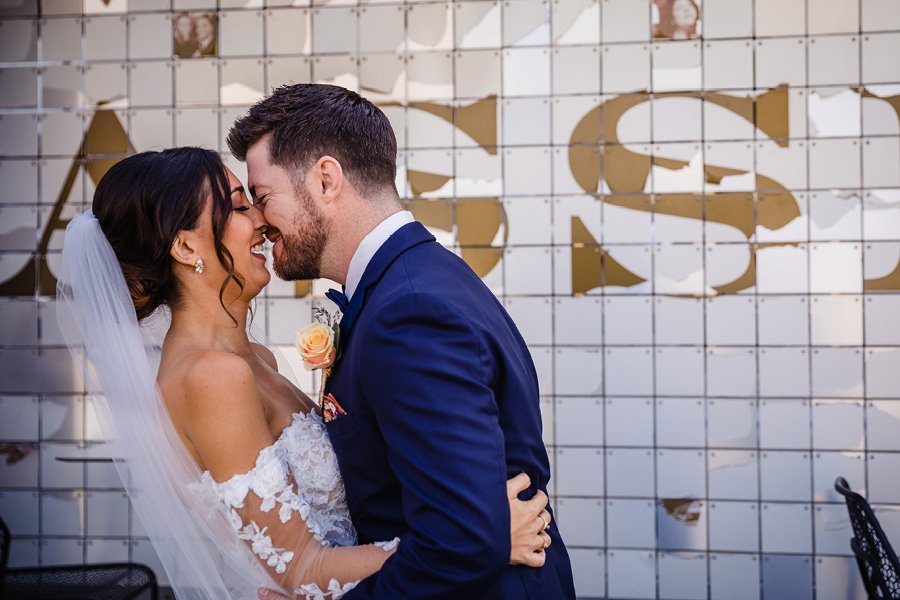 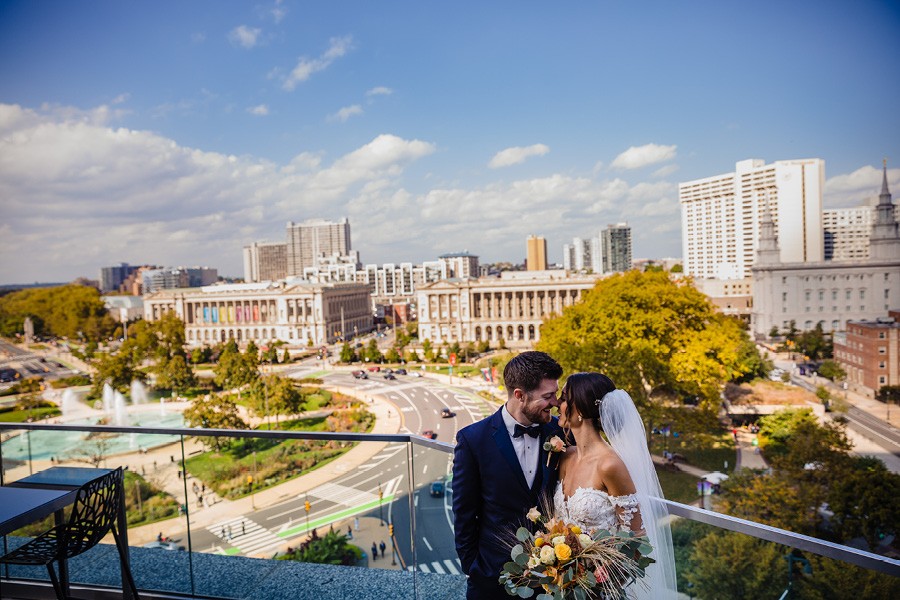 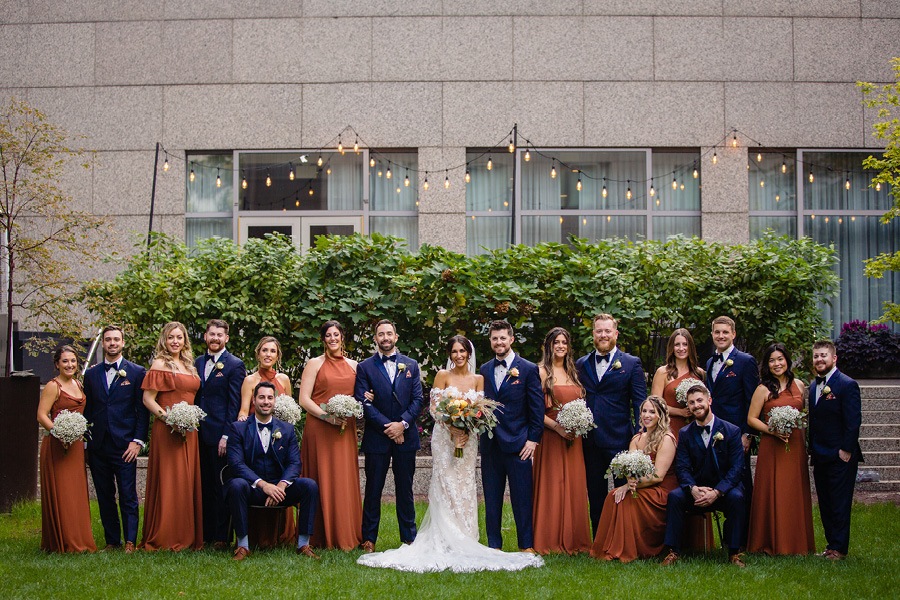 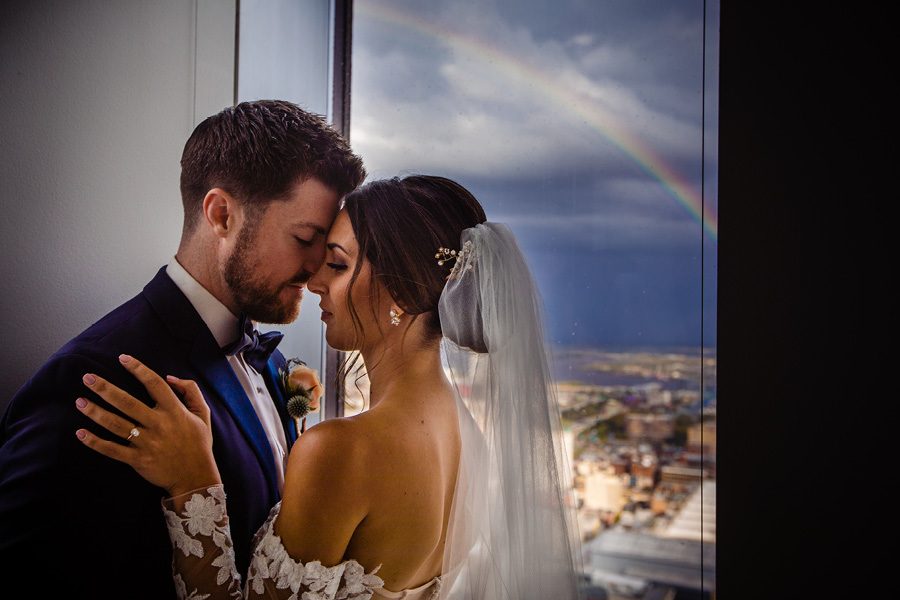 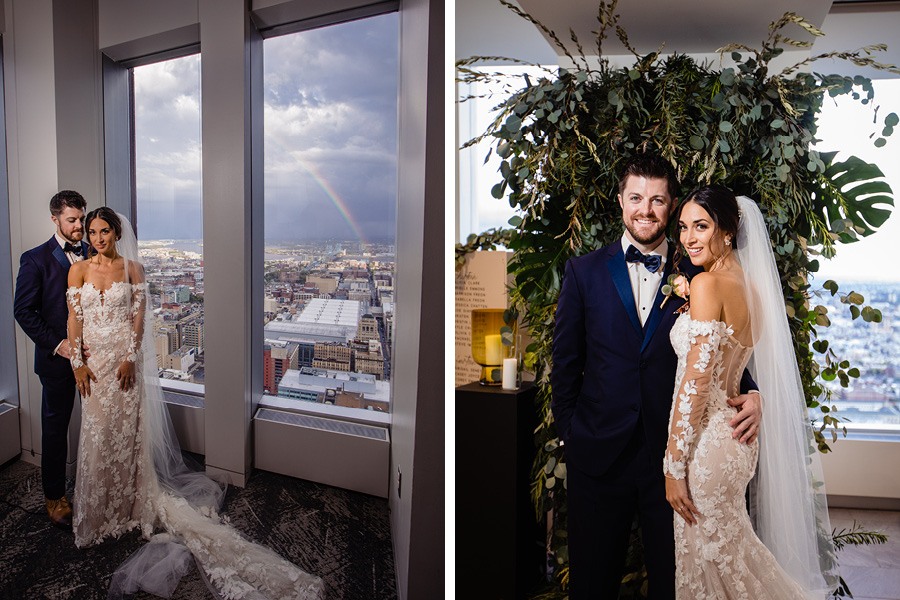 The couple, who today co-own the nineNORTH boutique in Haddonfield, planned to hold their 180-person soiree at Fitler Club, but the world had something different in store: When Hurricane Ida blew threw, it flooded the club’s ballroom, trophy room, garden, pool, treatment rooms, locker rooms and first floor of the gym. An event of this size was impossible at that time. (The repairs are currently nearing completion.)

Rather than cancel or postpone, however, the crew at Fitler Club, led by catering director Stephanie Carr, began reaching out to other wedding venues to see if they could lend a hand. One of the first to respond was Vue on 50. “[The team] immediately offered dates and a partnership, without hesitation or needing anything in return — even though we were not an exclusive caterer on the Vue list,” says Carr. Vue on 50 provided Fitler Club a discounted rental rate to use the space, which the latter footed to ensure that Alyssa and Mike didn’t incur the additional cost. 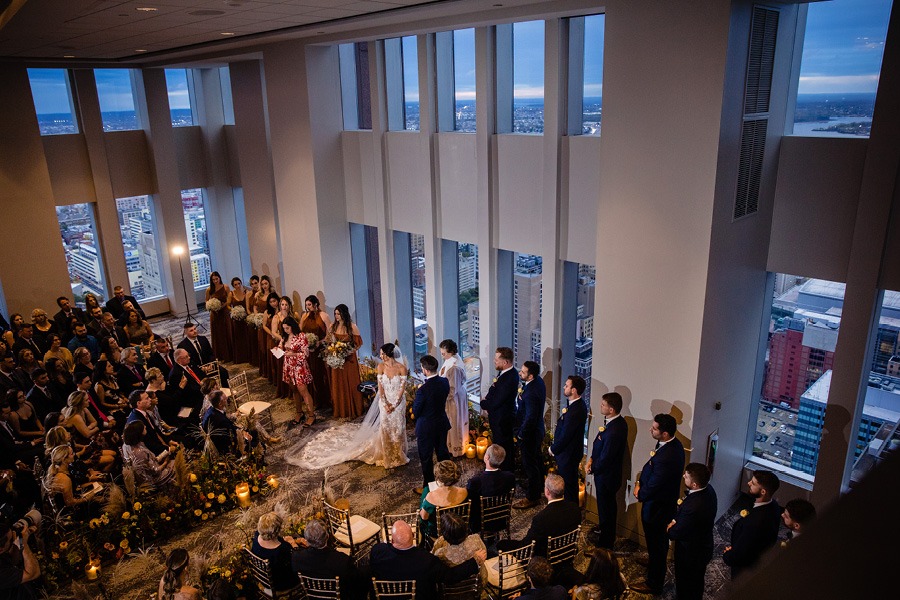 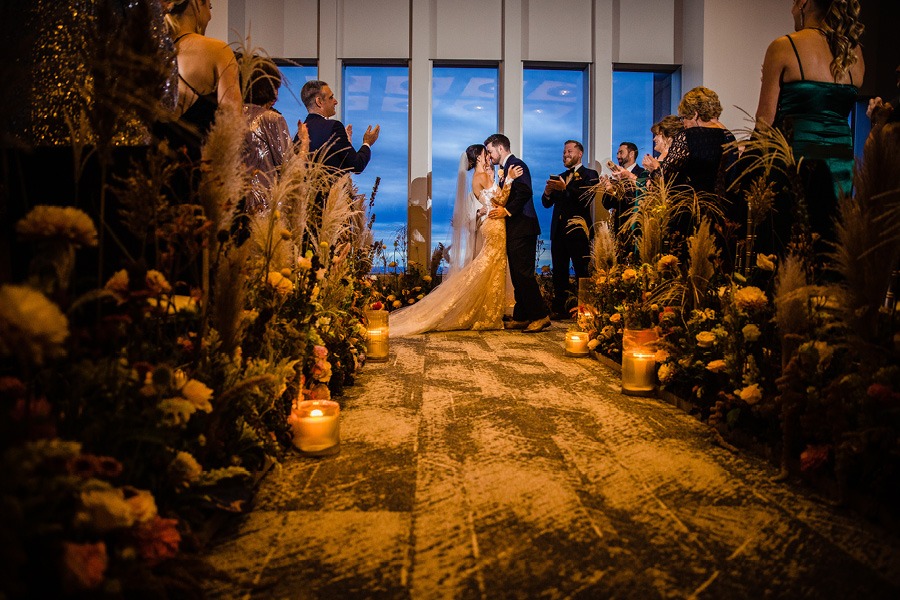 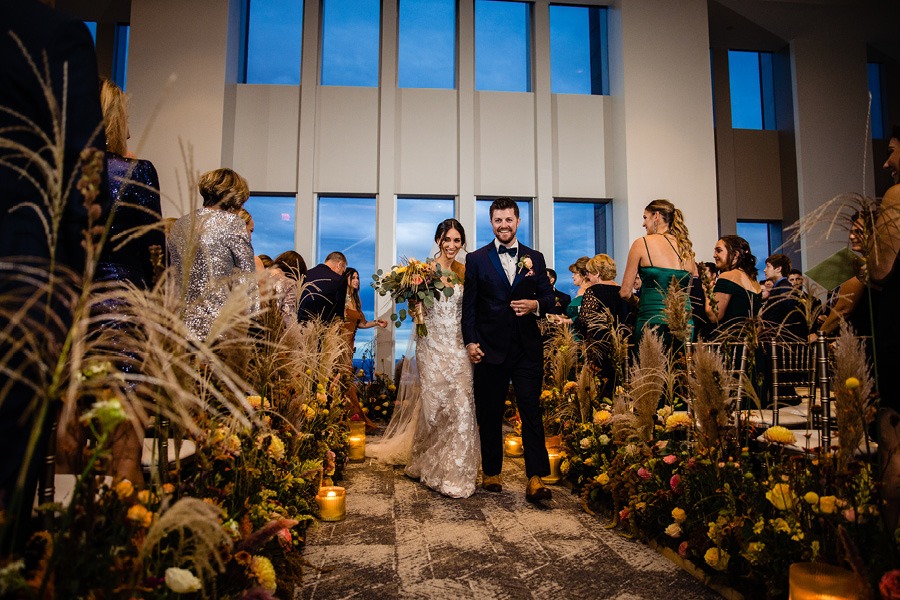 So, with about a month to go, Alyssa and Mike’s wedding was moved and reimagined, with Fitler Club providing catering, staffing and on-site coordination — in a skyhigh venue. “We never thought we’d have a view of the entire city of Philadelphia from 50 stories up,” says Alyssa. It was naturally the biggest surprise — and it was absolutely perfect, according to the duo.

Alyssa’s favorite part was the florals — a mix of greenery, and dried and fall blooms. They looked like a “wildflower field in the middle of the sky,” says the bride. And while they didn’t have a specific theme, the pair did nod to their favorite music throughout — lyrics from the Lumineers were on many displays, and guests signed a record in lieu of a guest book. (Their first dance was to “Sleep on the Floor” and “Ho Hey,” by the Lumineers.) And rather than favors, the pair honored Mike’s grandparents by re-creating The Busy-Bee, the penny-candy shop they formerly owned, with a self-serve candy station. 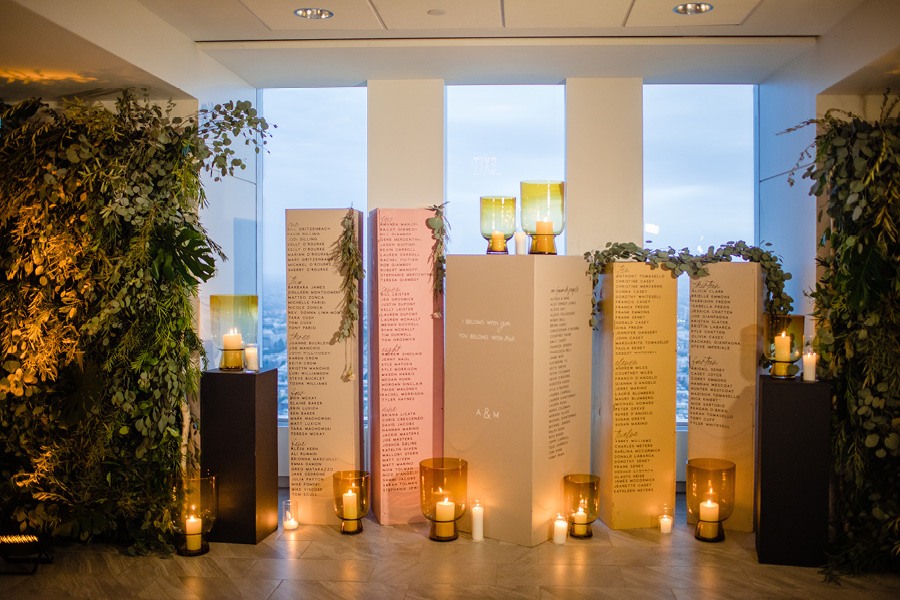 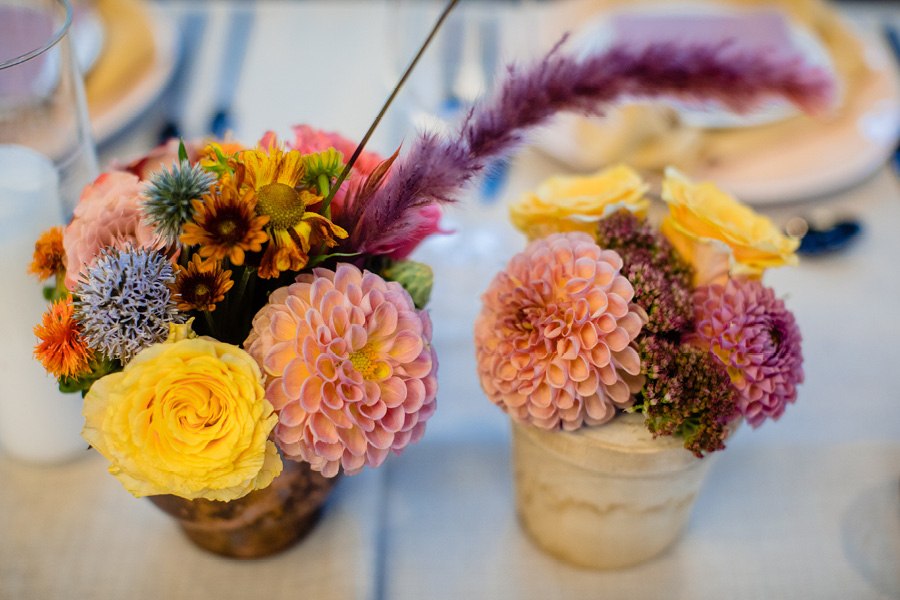 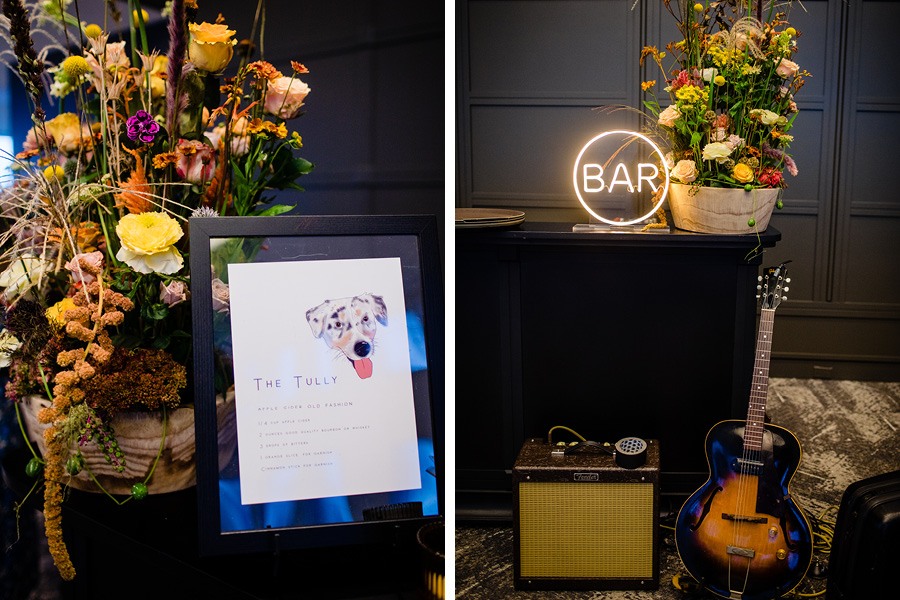 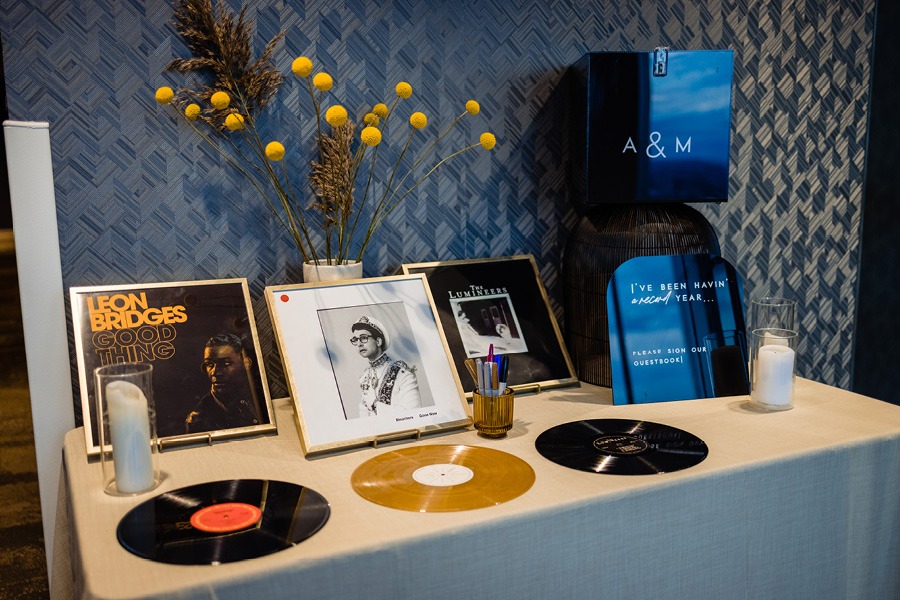 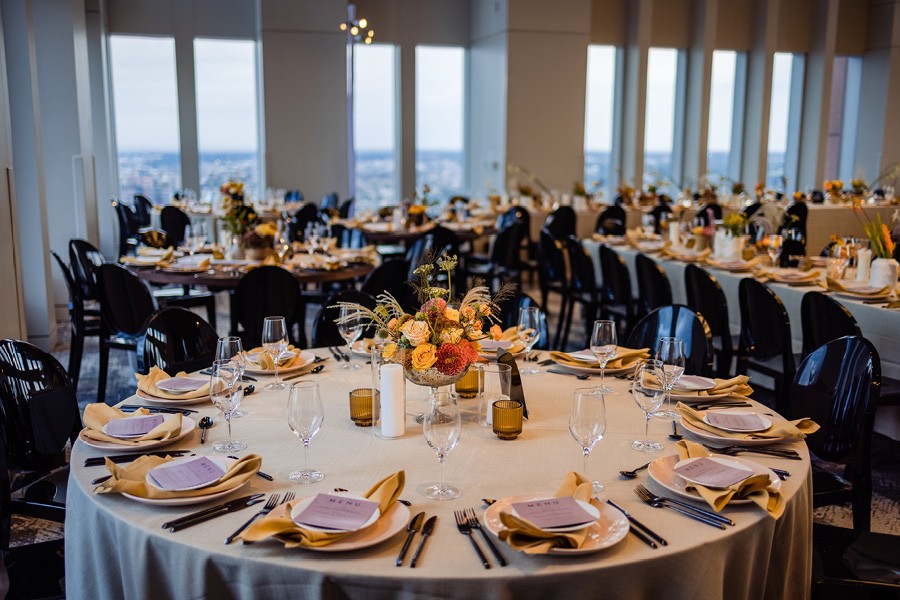 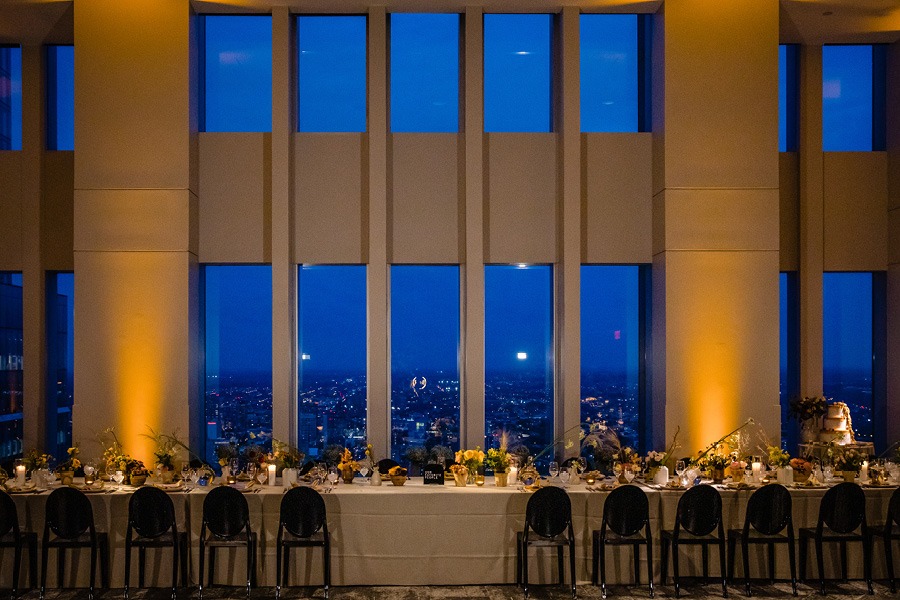 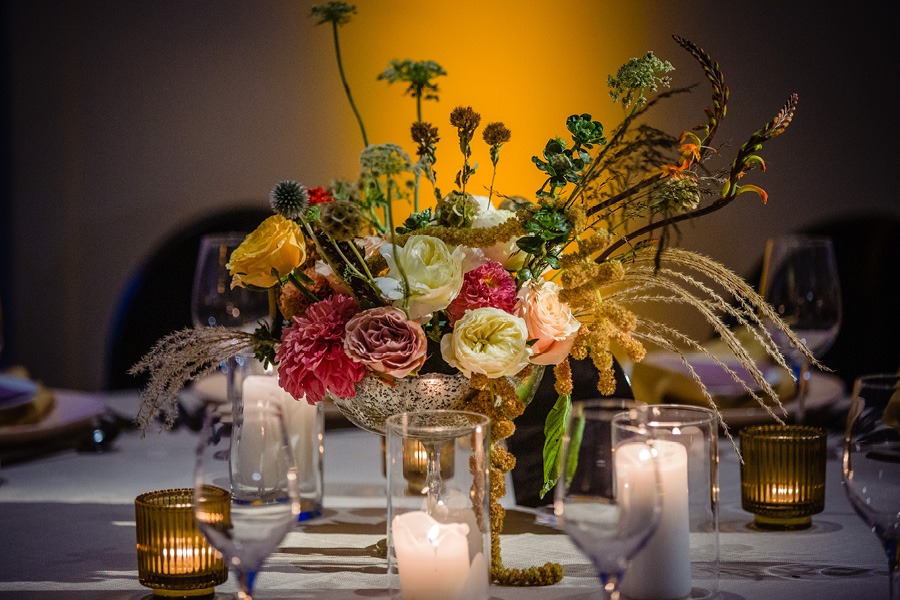 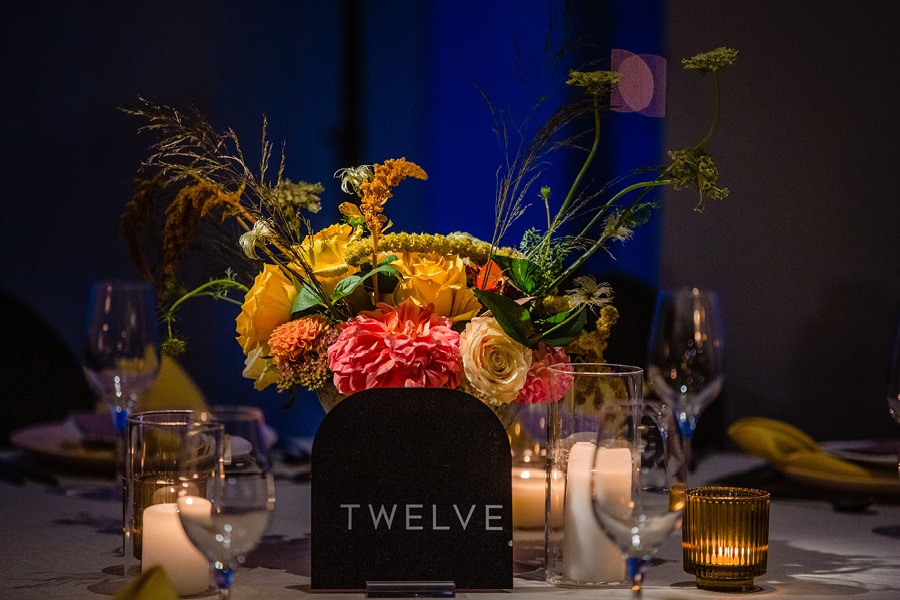 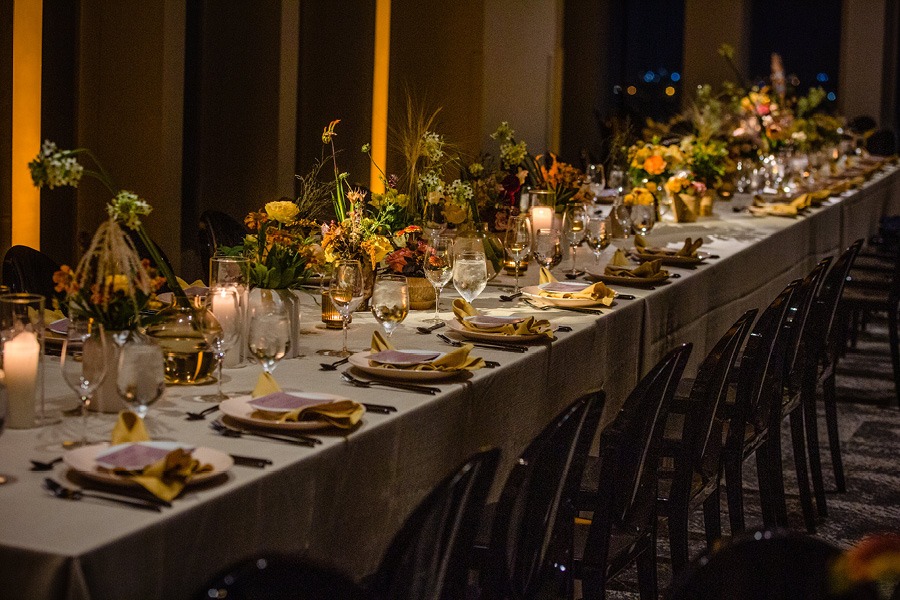 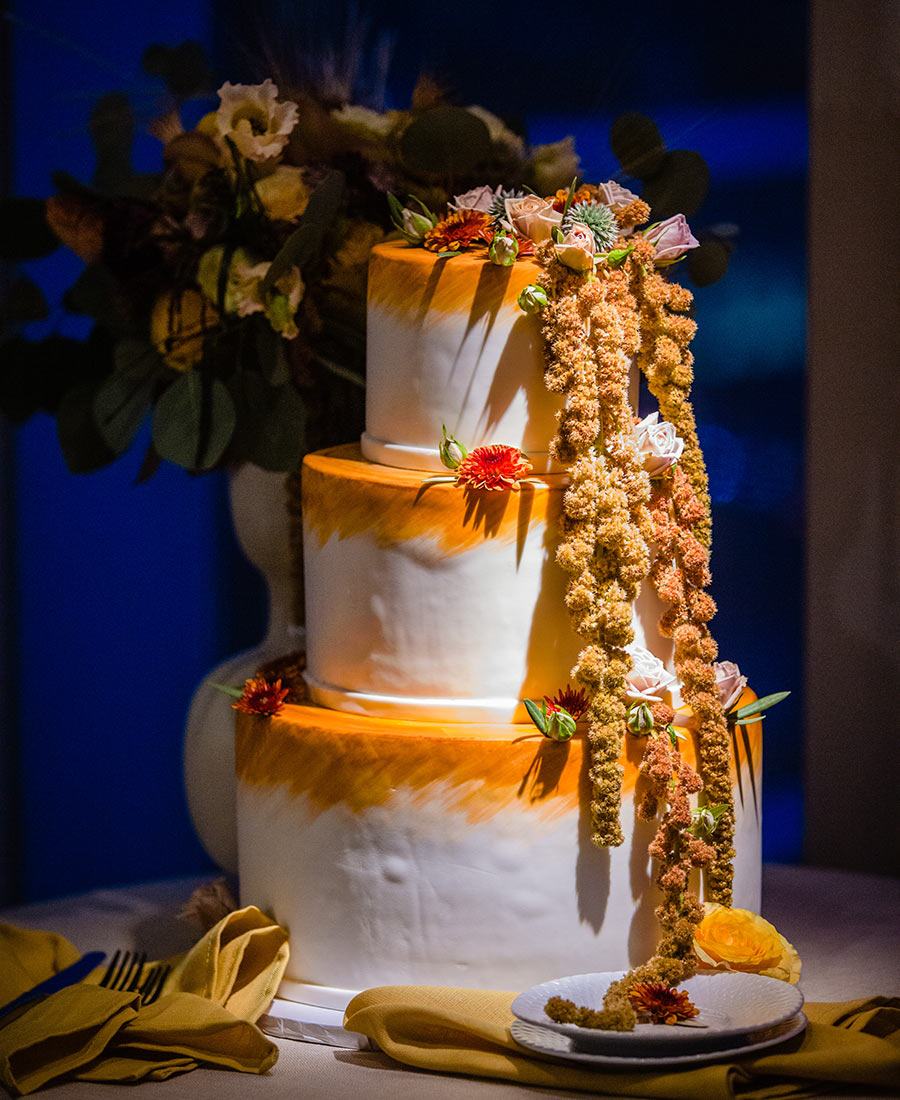 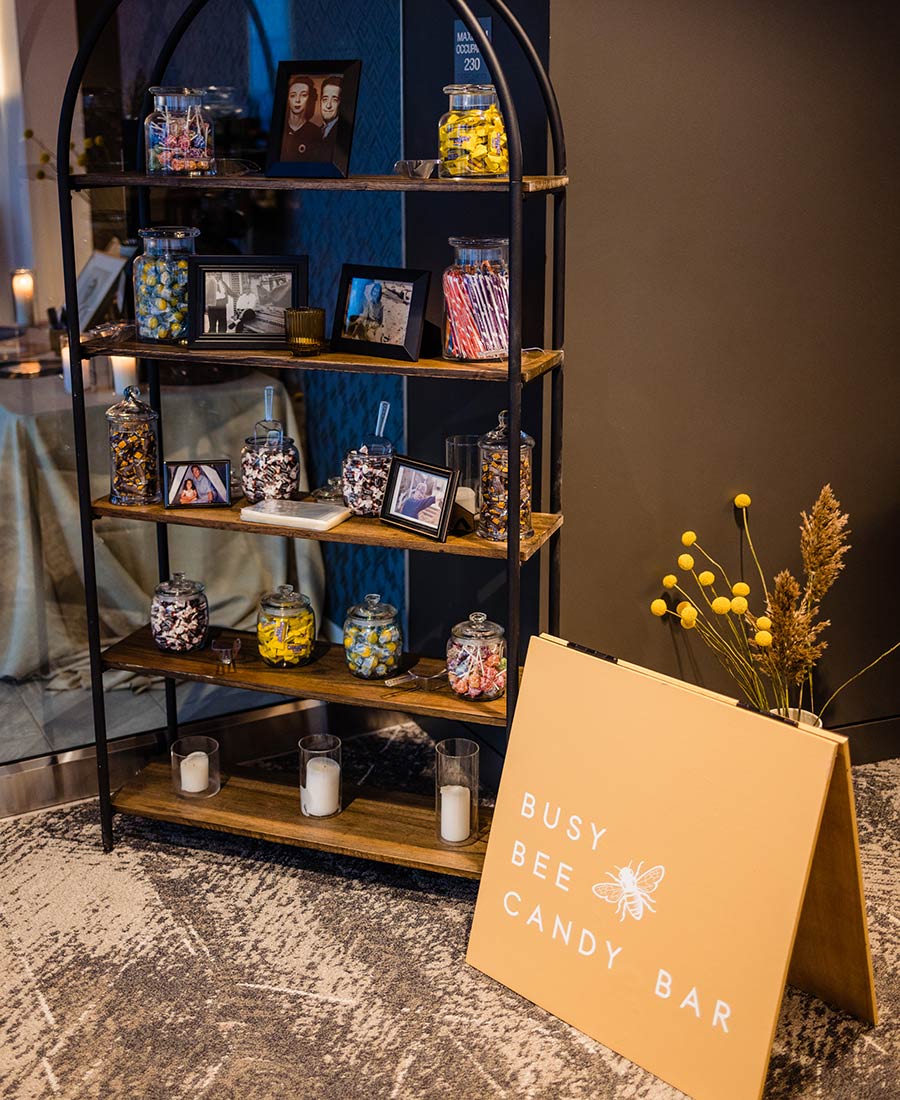 As for the most sentimental part, Alyssa says it was writing and reading their own vows. Mike agrees. “I second that, despite the fact that I cried like a baby during them.”

And we’d be remiss to leave out the food: a wedge salad with heirloom tomatoes, smoked bacon, pickled red onion and Great Hill blue cheese dressing as well as a choice of grilled Wagyu flat iron with whipped sweet potatoes or roasted branzino with golden-raisin brown butter. 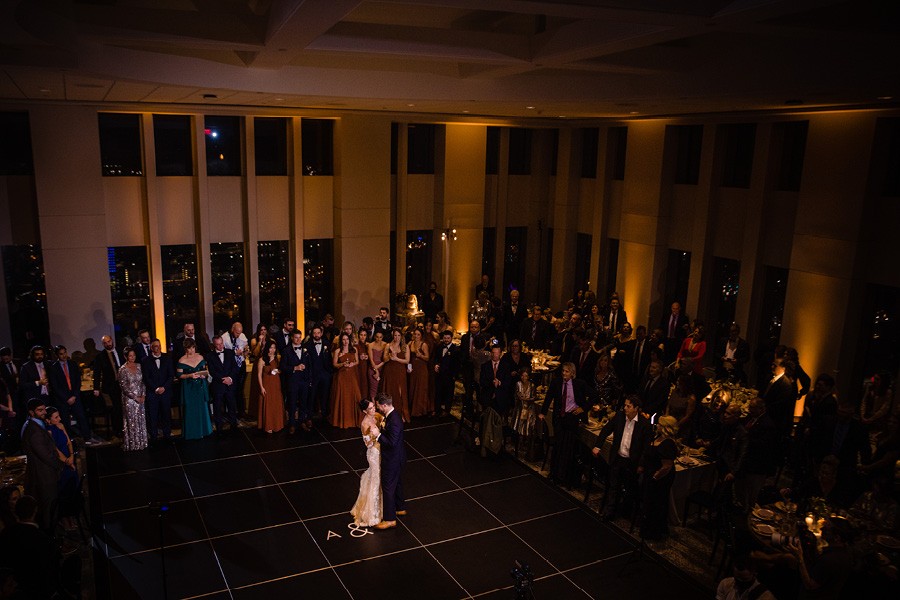 The couple, who hope to jet to Europe this summer for their honeymoon, describe it all as whimsical, fun, eclectic and unique to them. Finishes Alyssa: “[Our vendors] still somehow made all of our dreams come true on our original wedding date, and we will forever be grateful for that.”