The bride says “it was nothing short of amazing.” 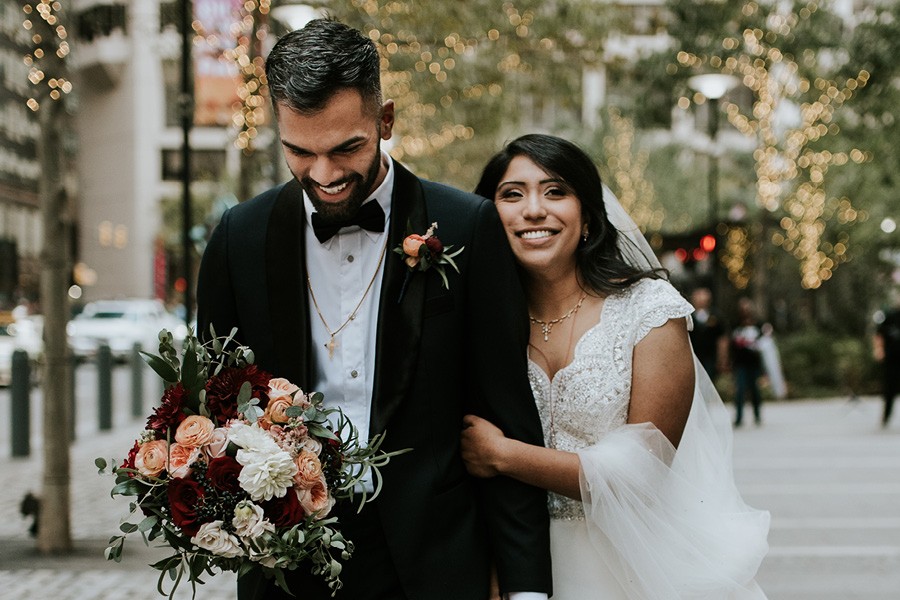 We love the memorable moments that make up a wedding. Whether they are big or small, intentional or unplanned (but special in their unique way), these experiences touch us for years to come. Such is the case with this wedding at Springfield Country Club, during which the groom surprised his bride with a choreographed Lion King-themed dance number that got friends and family involved. The photos by M2 Photography will certainly make you smile. 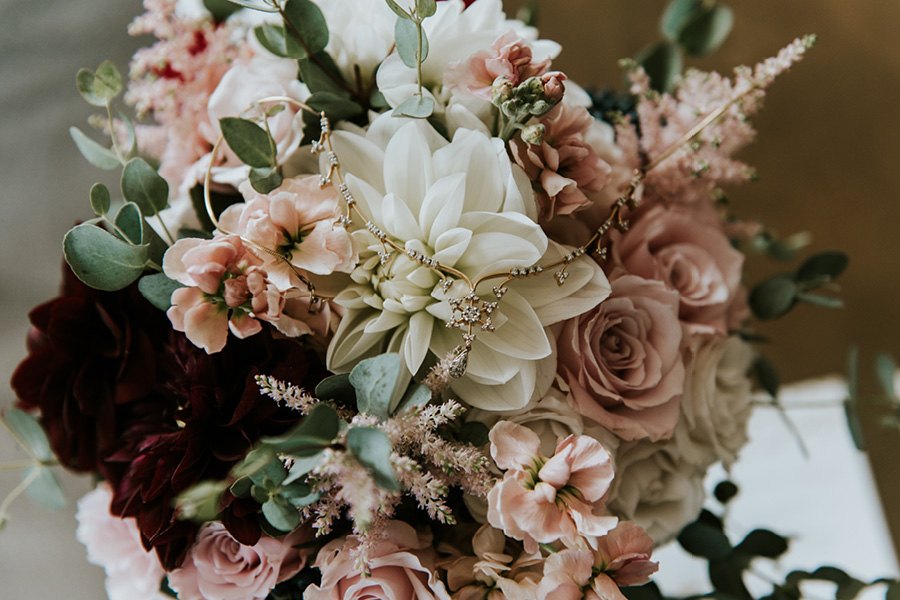 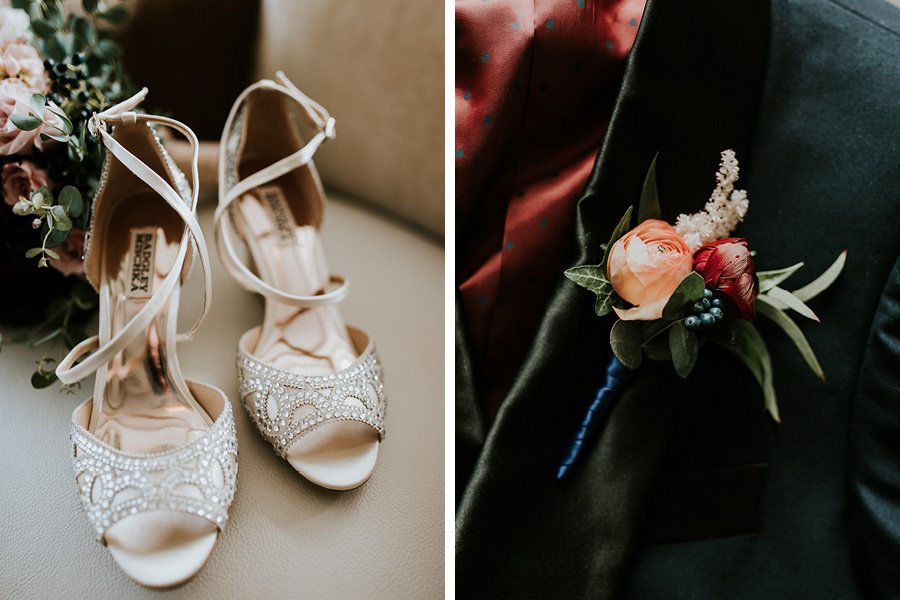 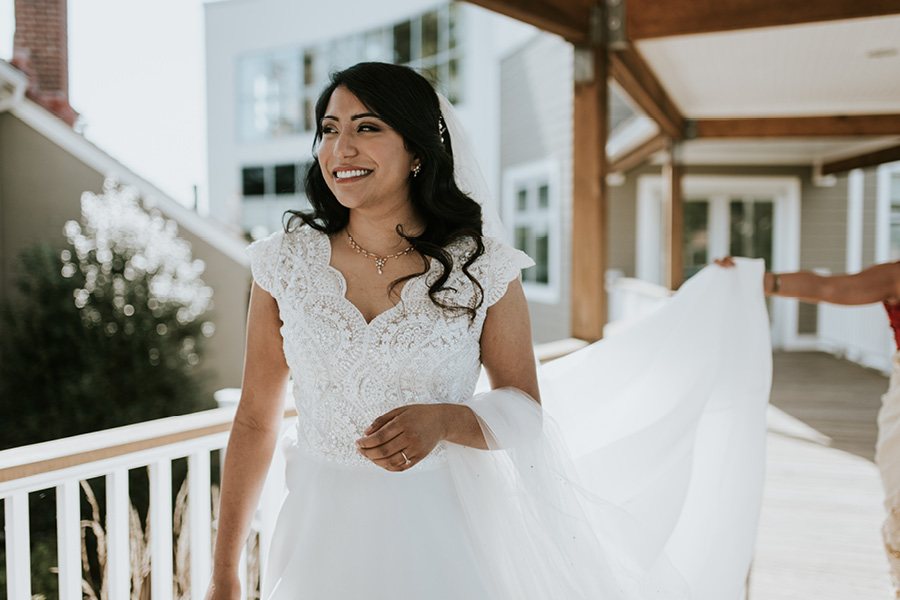 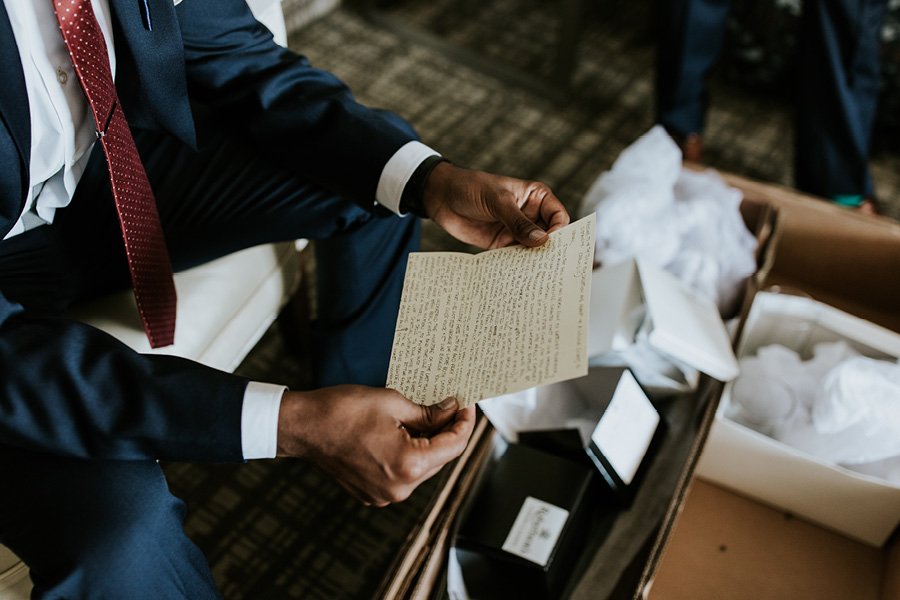 For Ashley Abraham and Chris Chacko, it all began with a dance. Well, kind of. The two met through mutual friends who were sightseeing together — though everyone was visiting Chicago for different reasons. Upon arriving at the Cloud Gate sculpture (aka “The Bean”) with her pals, she spied a group of men dancing and laughing together. “When I saw the tallest guy and best dancer … my kindergarten senses jumped to tease him instead of introducing myself,” says Ashley, a pediatric dentist. His reaction: “Having a random (but cute) stranger yell at me was jarring, but not totally unwelcome,” says the Michigan-born management engineer.

They exchanged names and began chatting while touring the town — they talked about grad school, her self-described “biases against the Detroit Pistons” (she is an Eagles fan, natch) and their relationships with God. (They later would learn that their families have known each other for years; Ashley’s parents attended his parents’ wedding in Philly years ago.) “That night I told my friends that I wanted to marry this guy,” says Ashley. And Chris? “I knew that I wanted to get to know this fun and eccentric girl more, but did not know if it was the right time for either of us to start a long-distance relationship,” he says.

As expected, they stayed in touch — and their much-anticipated first date took place in Philly after only connecting via long distance. (They now live in Royal Oak, Michigan.) “I wanted to give him the Philly experience,” says Ashley, who was born in New Hope. The duo got cheesesteaks (she was too nervous to eat, a rarity for the food-lover) and did a walking tour. “It was sweet and awkward as we tried to suss out how we were both feeling.” 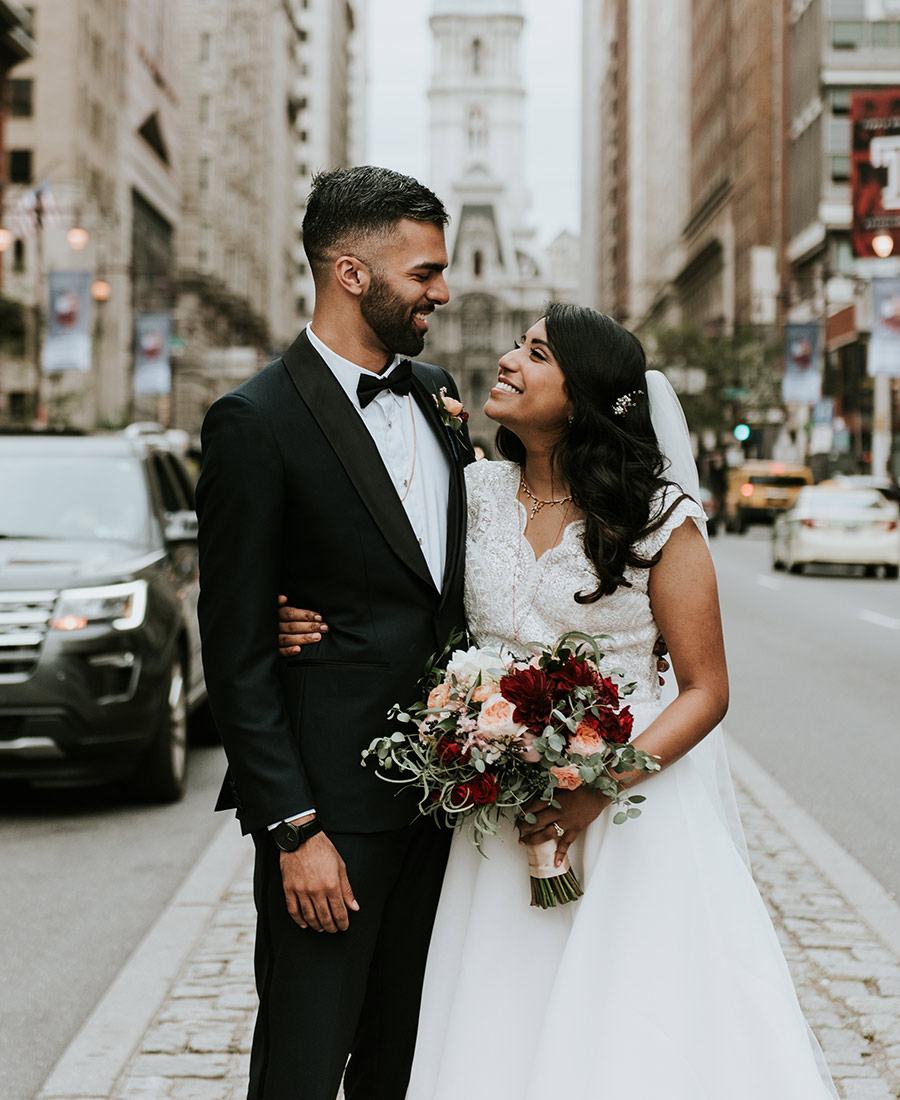 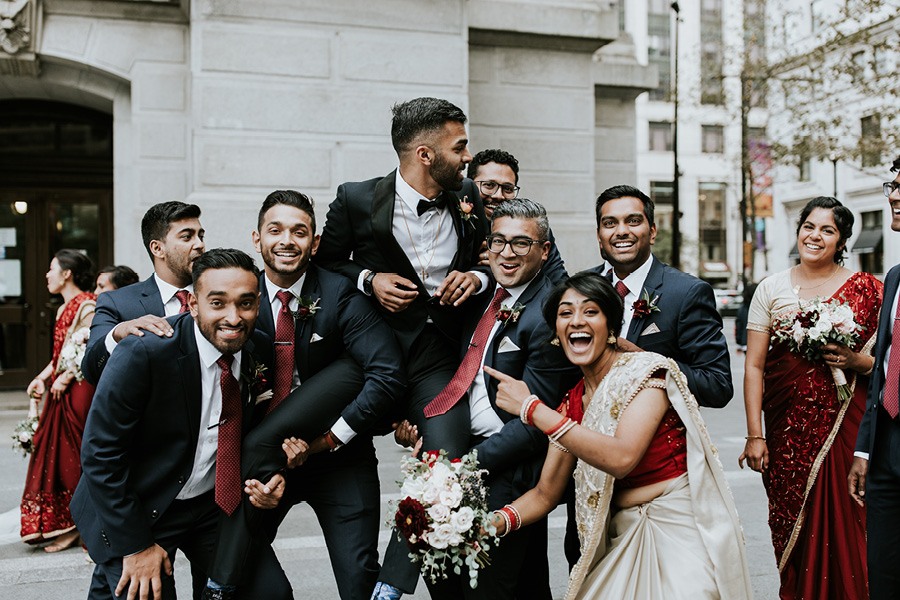 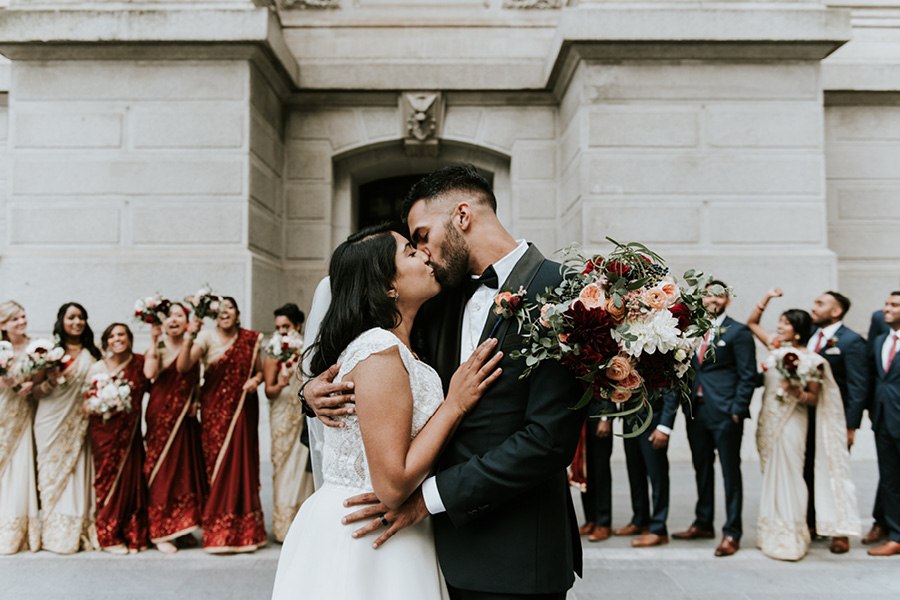 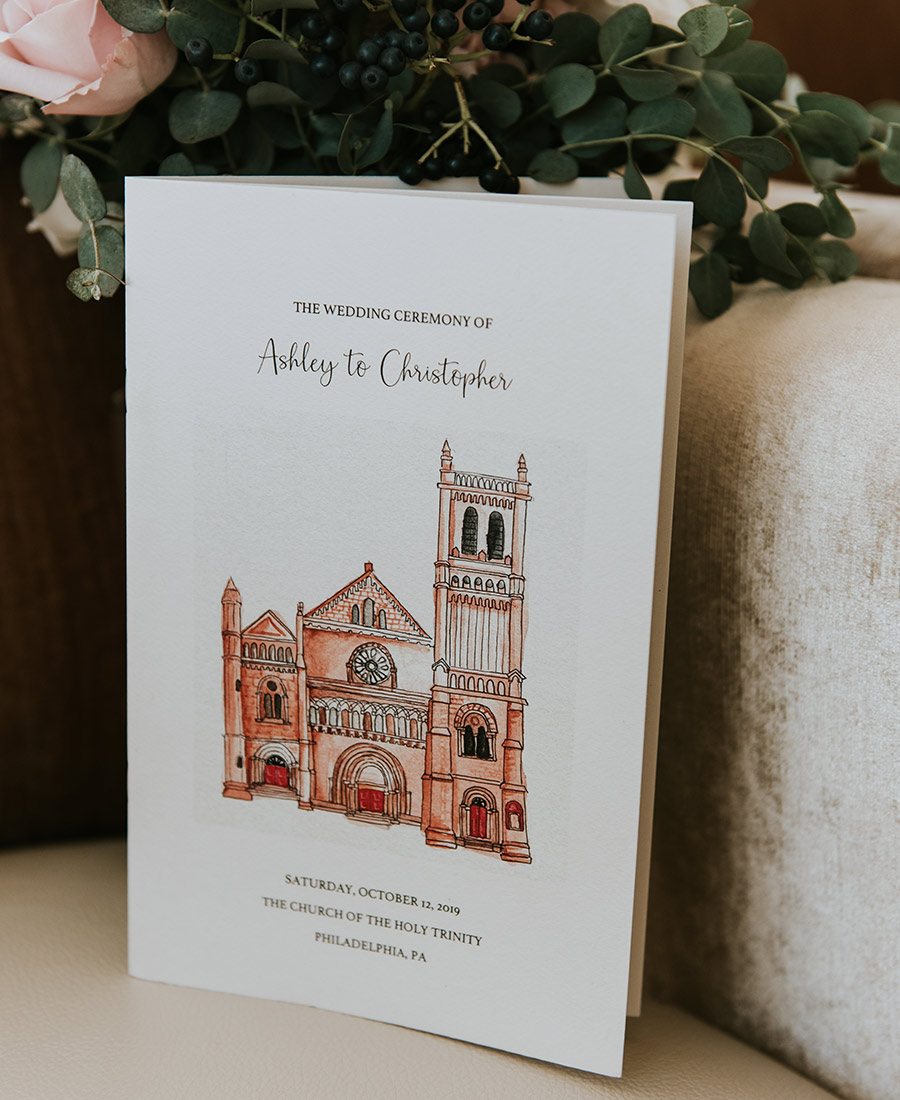 Two years later, Chris proposed — in a big way. With the help of their friend, her family brought Ashley to The Linc under the guise of a VIP tour. Ashley was led to the locker room, and there was Chris: He proposed with the Lombardi Trophy just inches away. He also wrote and illustrated a picture book depicting their story; the couple even walked onto the field, where their names were on the Jumbotron. “It was totally surreal — an out-of-body experience,” says Ashley.

They were wed eight months later, on October 12th, 2019, in an epically themed wedding: “Motown Philly, a homemade, personal, big, fat Indian wedding.” The couple wanted it to feel like an homage and last hurrah to Philadelphia (she was planning to move to Michigan) and a welcome to Detroit. They were married at The Church of the Holy Trinity in Rittenhouse Square; Ashley’s close friend illustrated the wedding program to highlight and explain some of the South Indian traditions in the ceremony. “It was important to us to explain the deeply historic and Biblical service that our parents were also married in.” And four of their friends performed guitar and vocals as guests gathered. 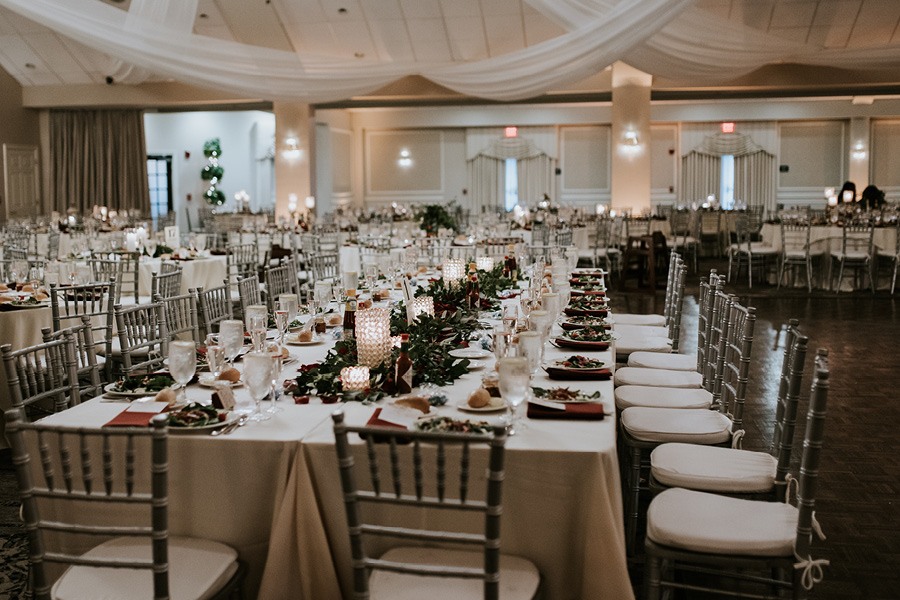 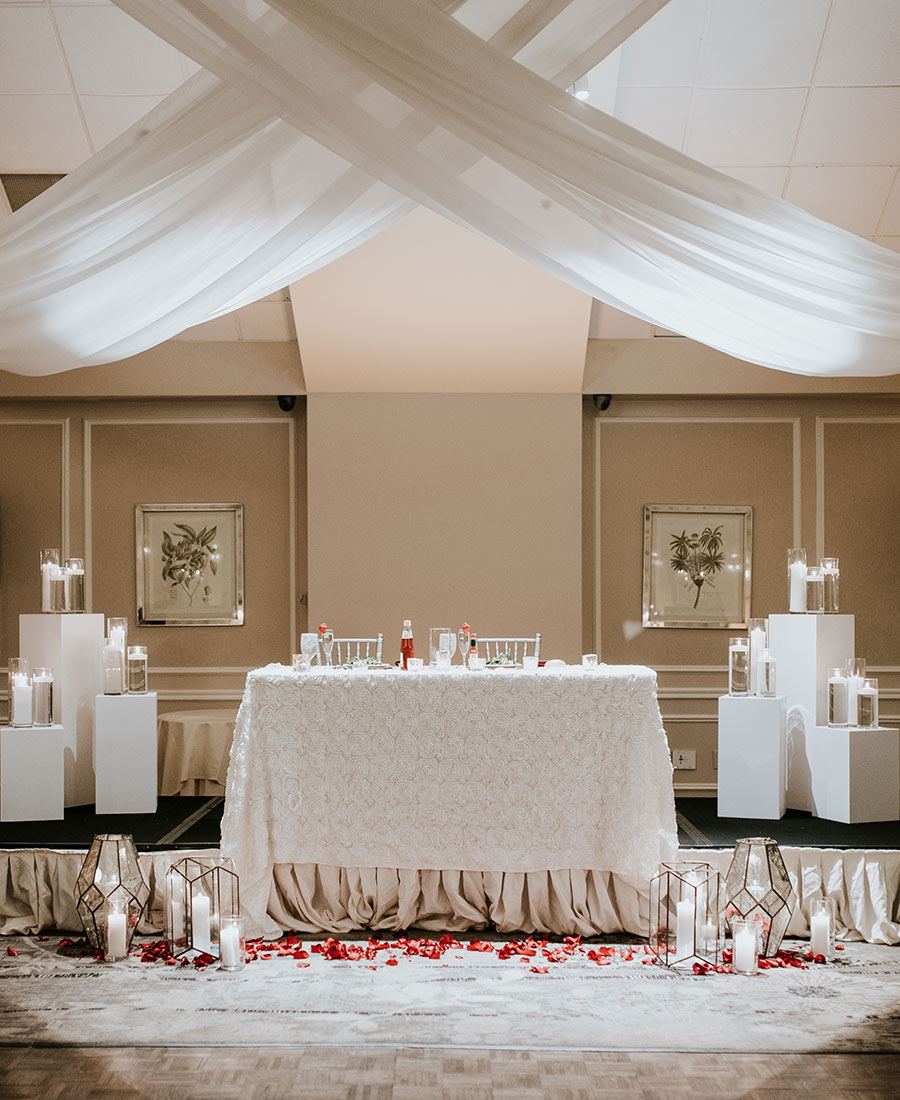 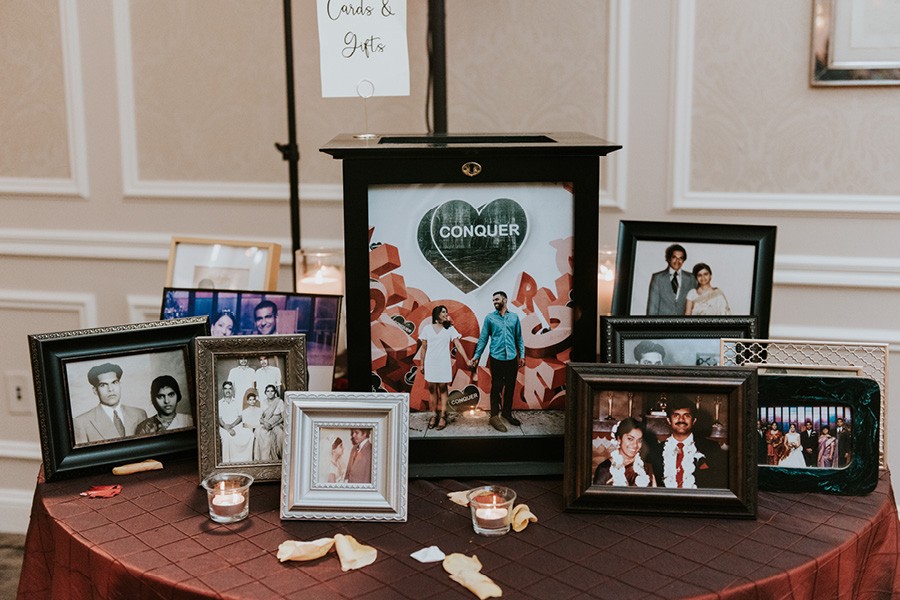 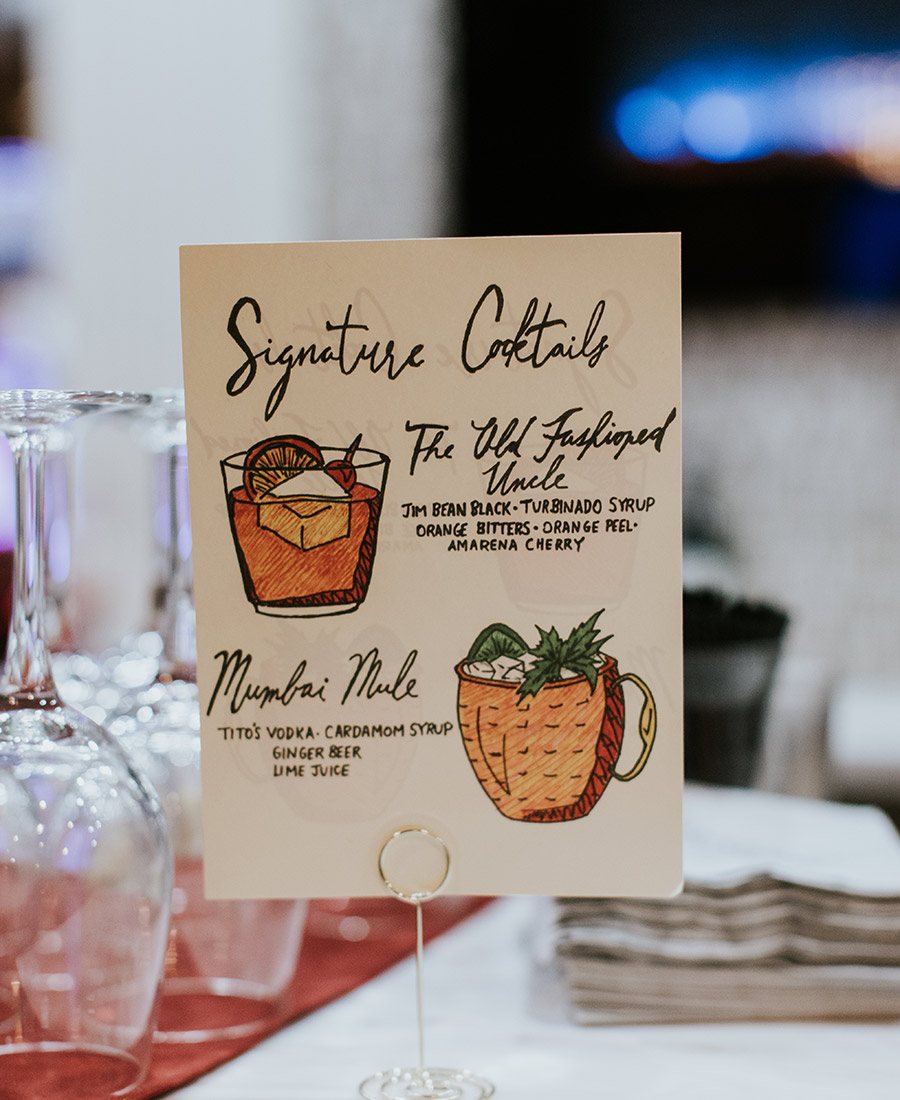 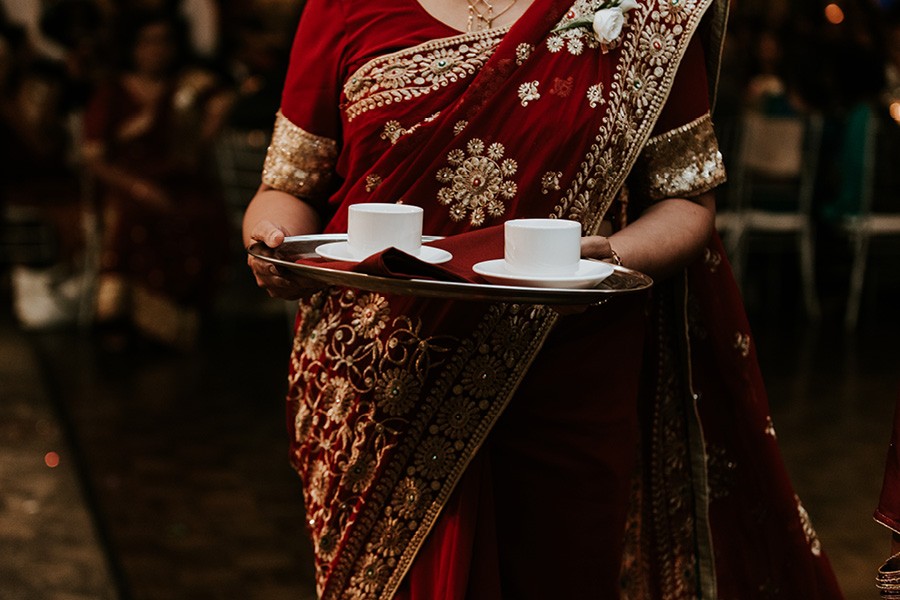 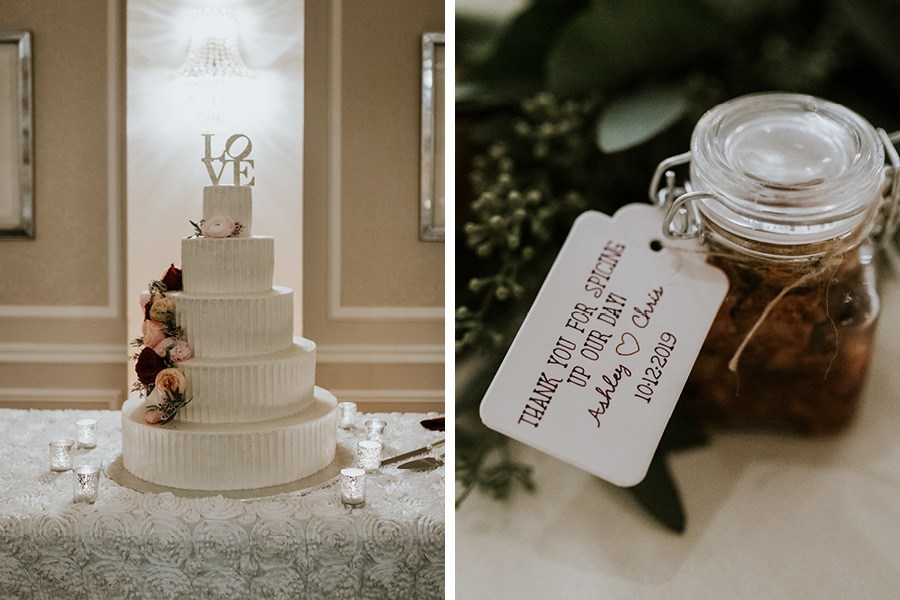 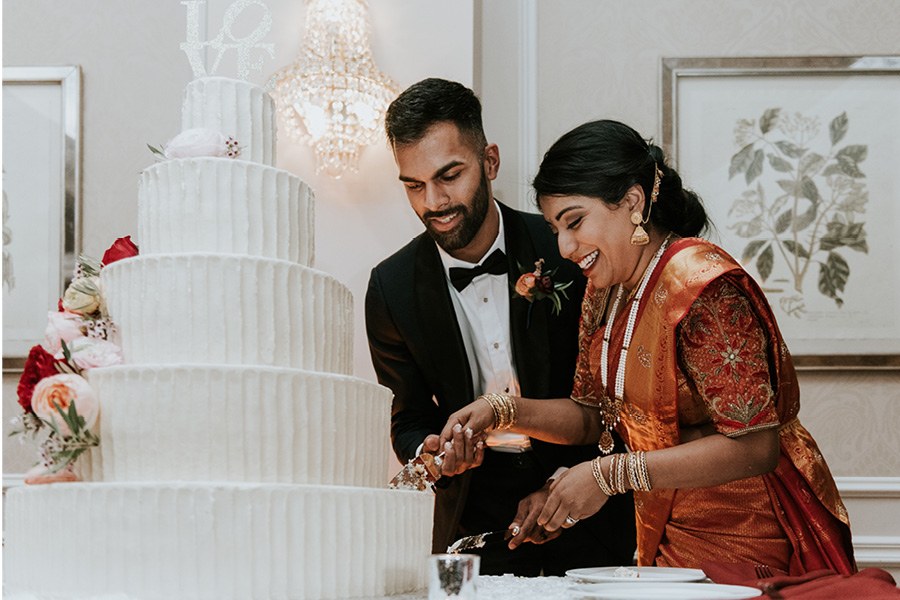 Particularly poignant was having their nephews as ring bearers. Daniel (Chris’s relation) and Nicky (Ashley’s) pulled Stanley (the groom’s other nephew) in a wagon bearing the sign “Ashley Aunty’s Bodyguards.” (Two weeks later, the couple learned Nicky and his mom, Julie, also Ashley’s maid of honor, passed away in a tragic car accident. “Having those indelible memories of Nicky and Julie in the wedding will forever be the most special,” according to the couple.)

Their reception followed at Springfield Country Club; the groom’s favorite part was his bride’s unique touches to bring her vision to life. “Also the fact that we had a free chocolate fountain thrown in thanks to the amazing staff and Ashley’s soliloquies about dessert,” says Chris. Ashley hand-lettered the escort cards. The tables were named with numbers, as well as prominent Philadelphia and Detroit celebs. The gift table featured wedding photos from their siblings, parents and grandparents. And Chris illustrated the drink cards for the Cardamom-infused Mumbai Mule and The Old Fashioned Uncle. 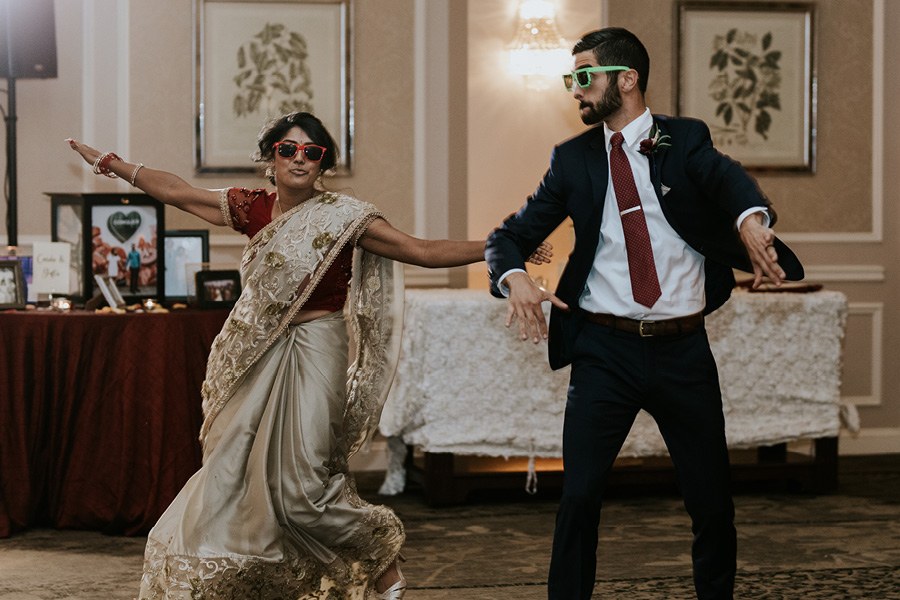 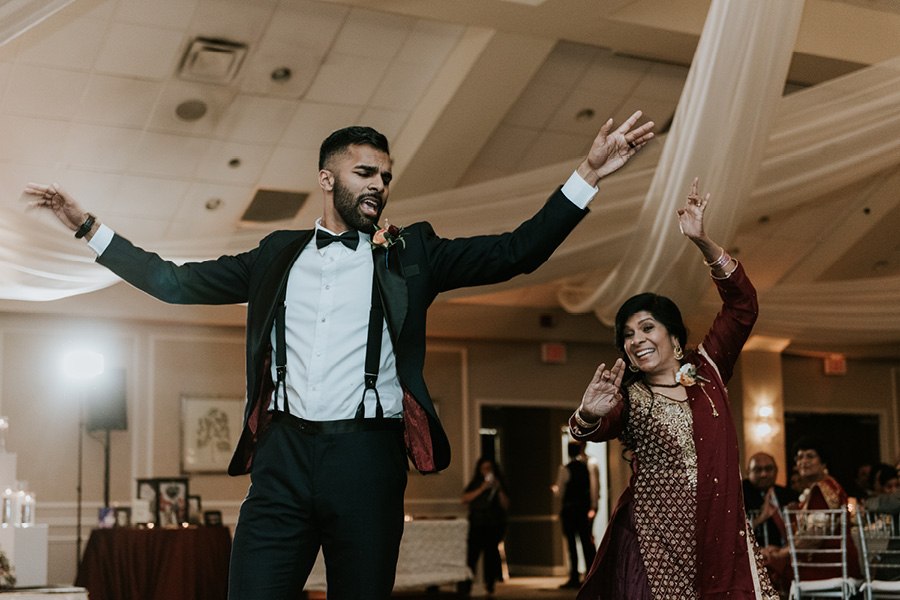 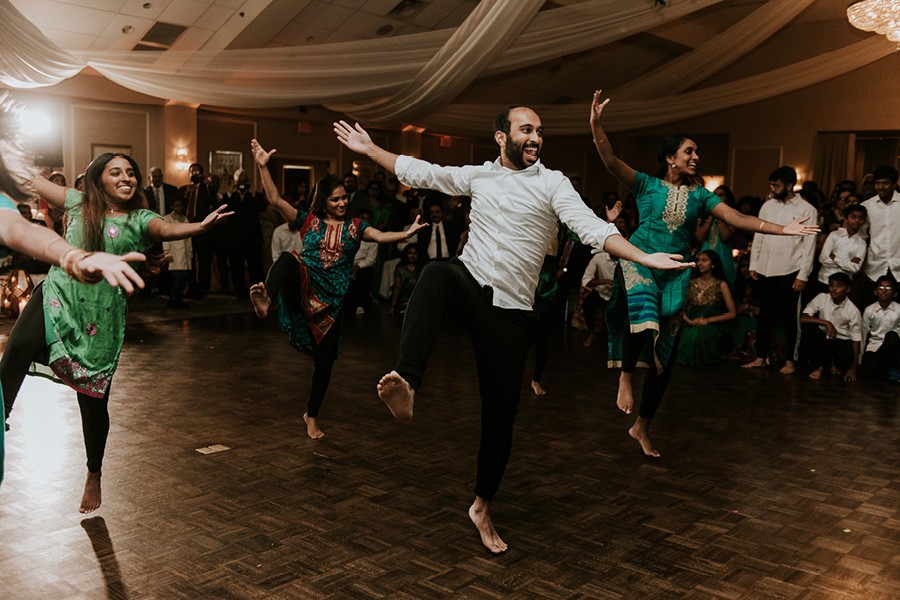 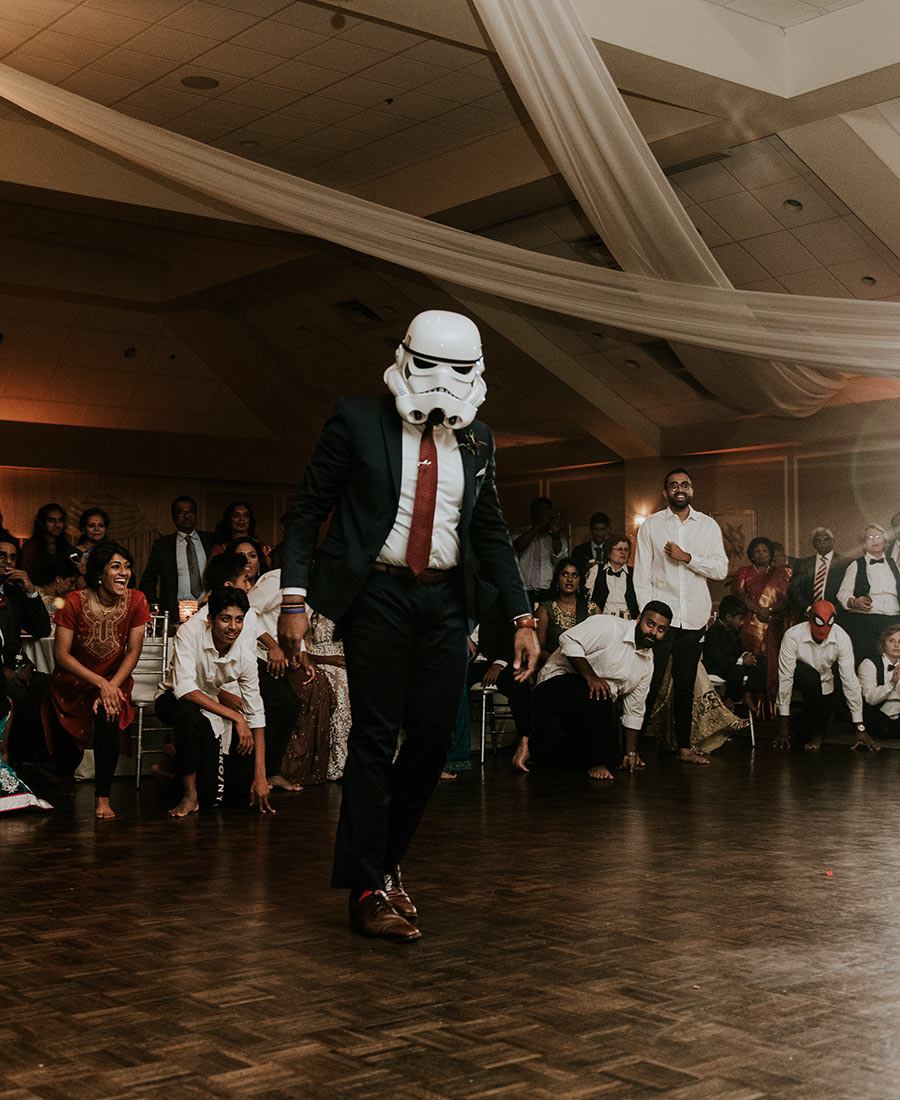 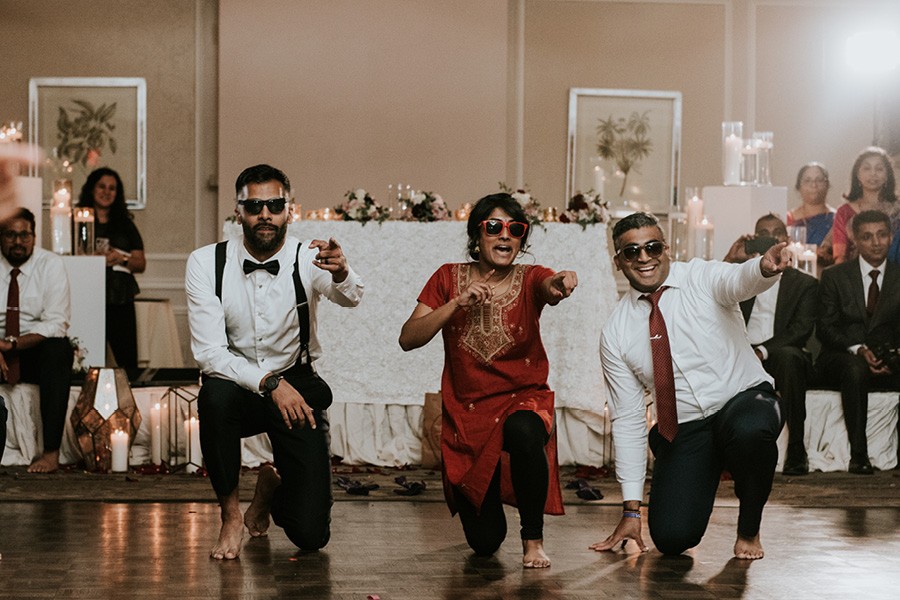 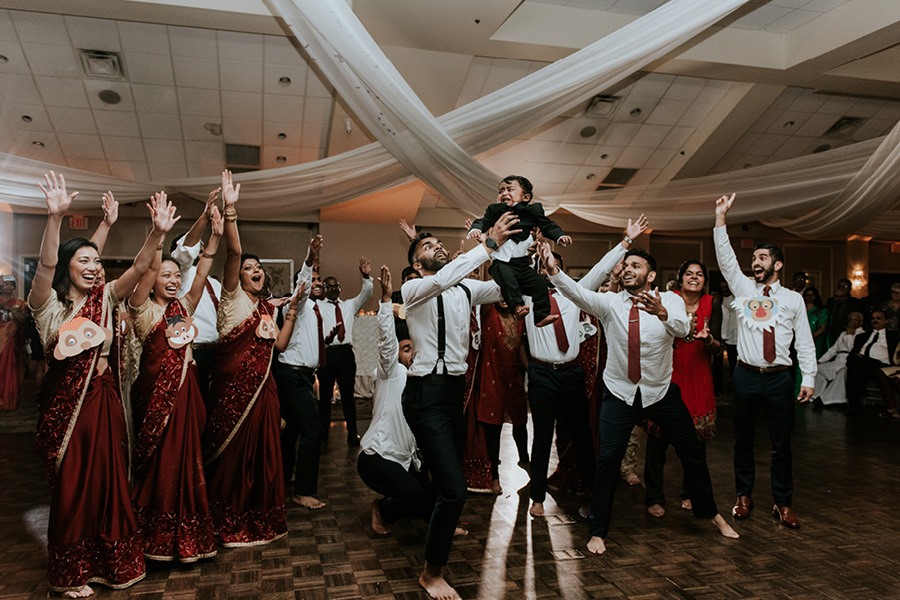 The food, too, was an important aspect; Ashley wanted the vibe to feel like a party at their house, with Indian and American appetizers, samosa chaat and chili chicken (her and his favorite, respectively), lamb chops and shrimp. “We joke that my dad ranks his experience as a wedding guest by the size of the shrimp served.” Wedding favors were also tasty: mini jars of homemade mango pickle from a family recipe. And chocolate. 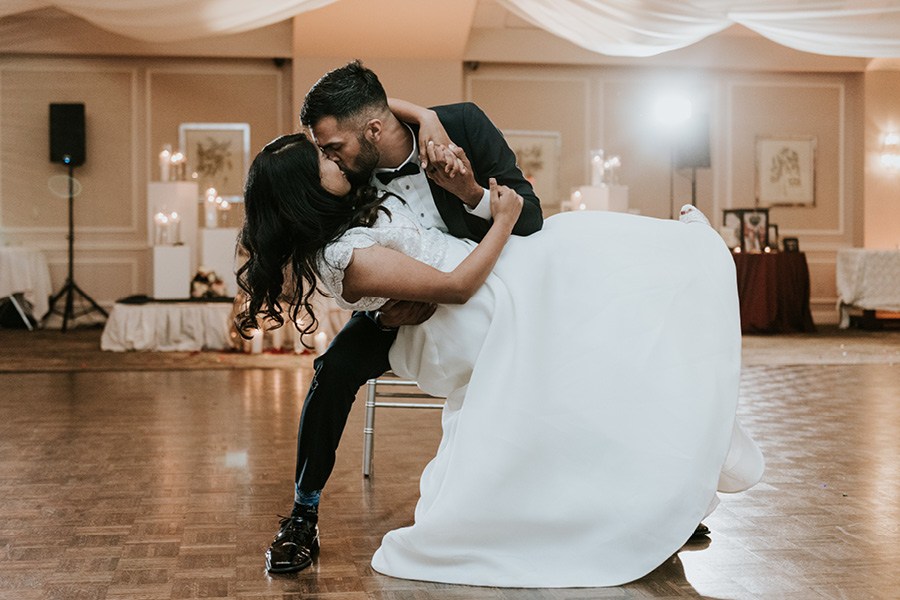 But the dancing can’t be overlooked. The duo’s first dance was to “You and Me,” by Penny and the Quarters. Chris choreographed that — then he surprised his bride with an over-the-top, 10-minute, Lion King-themed dance montage starring their families and bridal party. Beyoncé, Bollywood, the Jonas Brothers, Nelly, Billie Eilish and Boyz II Men all played a roll in his production. “It was nothing short of amazing,” recalls Ashley. We agree.