According to a bride who doesn’t even really like the holiday to begin with. 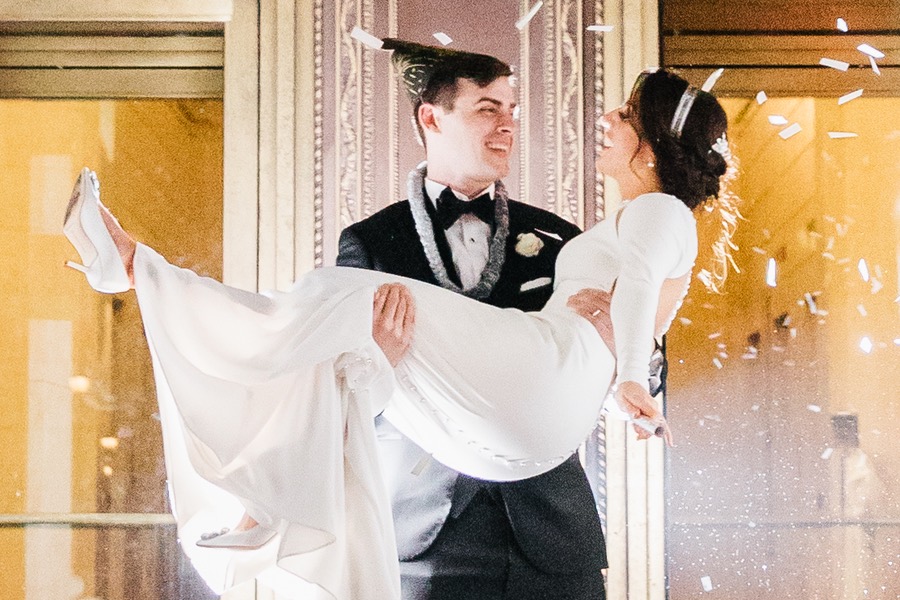 Erica Ferranti and Conor Gleeson celebrate their New Year’s Eve wedding the only proper way: with confetti. All photography by Emily Wren Photography

Holiday weddings are a controversial move. There’s valid arguments for and against, but, as is true whenever you’re planning around a large group of people, sometimes you’ve got to pull the trigger knowing the decision won’t please everyone involved. Erica Ferranti did just that when she wed Conor Gleeson on December 31st, 2018 at Philly’s Down Town Club, but she has zero regrets about her New Year’s Eve wedding—despite not even really liking the holiday to begin with. Here, she explains how she and Conor arrived at the decision, the unique circumstances they dealt with while planning, and how their guests felt about the whole thing. (Spoiler Alert: They loved it!) If you’re considering a New Year’s Eve wedding, you’ll definitely want to read on.

This story is part of Philadelphia Wedding’s on-going Real Talk series, where real couples share their unique approaches to wedding planning and marriage. If you have a unique story or experience worth sharing, we’d love to hear about it.

Both of us hate New Year’s Eve. We always have that debate … do we want go out, or do we want to stay in and do something more chill?

I had never thought about a winter wedding. But my husband’s extended family lives in Ireland and the United Kingdom, and we were thinking about when would be easier for them to take time off work to come to the U.S. We also thought it’d be great to be with everyone on New Year’s Eve to kick off the start of our life together. 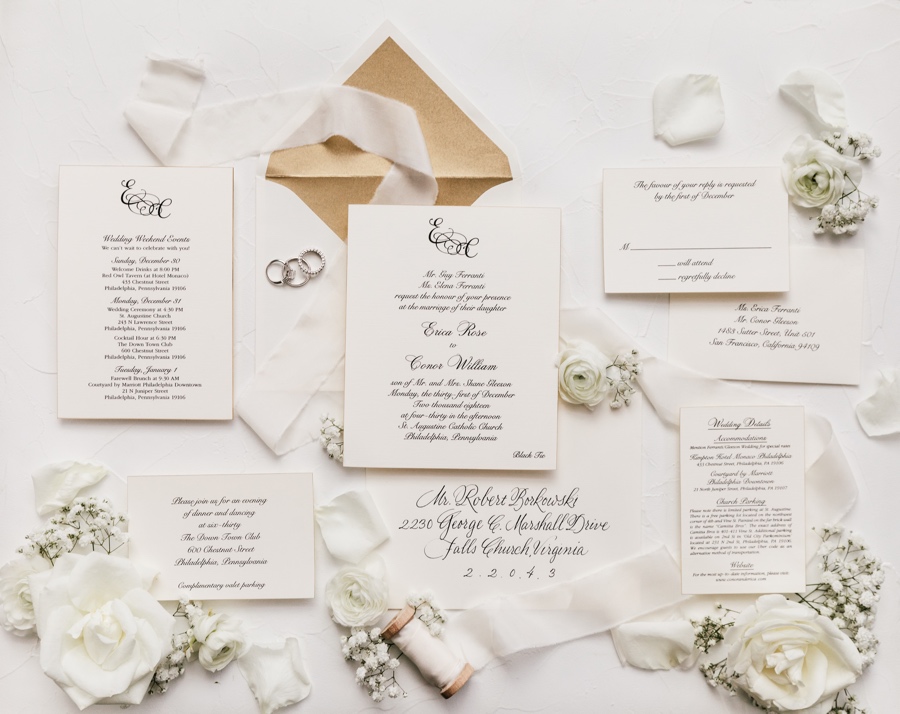 Classic white-and-black invitations set the tone for a formal celebration.

We decided on black tie … because we wanted it to be an exciting event for everyone to get dressed up and be together for.

I had been to a few weddings at the Down Town Club … and absolutely loved the venue every time. It’s such a classic, beautiful space, and it fit with our desire to have a more formal wedding. We also wanted something that was pretty centrally located in Philadelphia because we were going to have so many people coming from out of town. 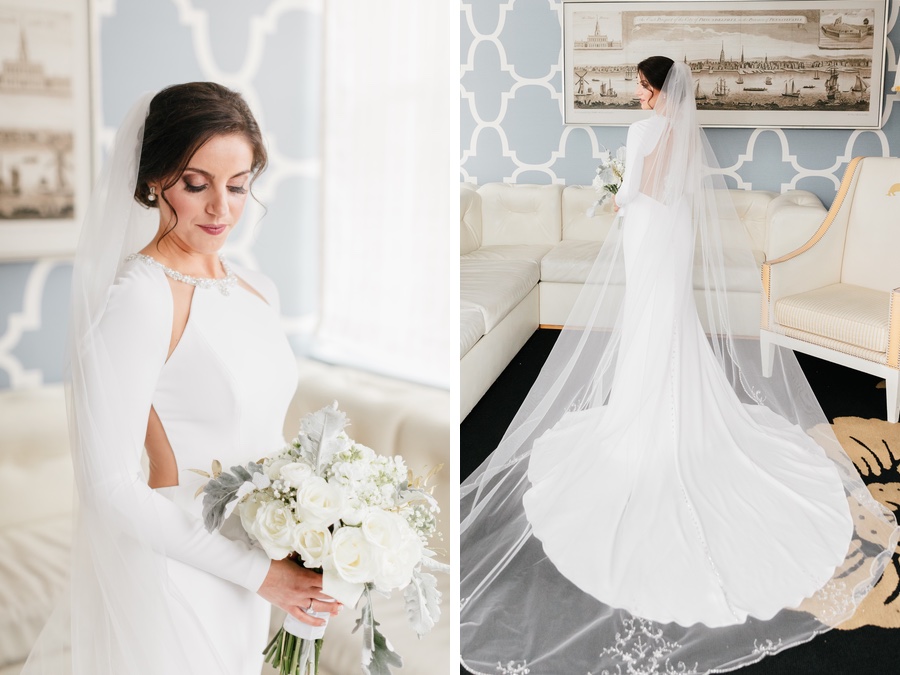 And then we heard … about the fireworks that go off at midnight and how you can see everything from the ballroom. I loved the idea of when the ball drops, we do our celebration and then our guests can see the whole show. [The Down Town Club] had availability for the 31st, so it seemed like everything was falling into place.

I probably would not … have worn a long-sleeve dress without a late-winter wedding. When I was looking at dresses, I was deciding between the one I wore and another that was A-line and more traditional. I was going to do an accessory change from the ceremony to the reception, but once I put [the long-sleeve] dress on, I really felt it. I don’t know that I would have opted for something as unique or dramatic if it wasn’t a holiday. 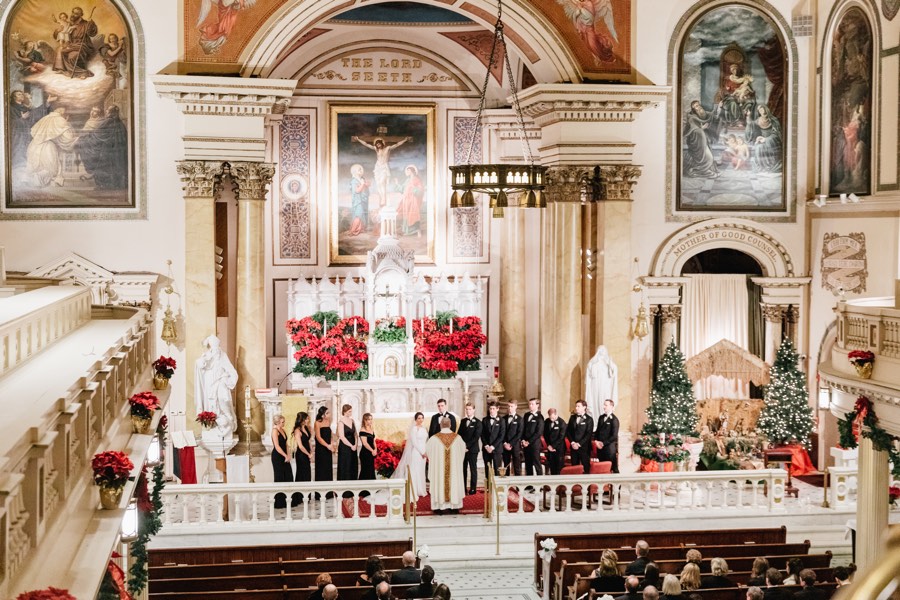 The couples’s St. Augustine ceremony was pushed back to 4 PM to accommodate a later timeline for New Year’s Eve.

I underestimated the challenge … that would be pushing the timeline of the wedding to fit with the holiday. A Catholic wedding ceremony typically starts around 2. It runs an hour/hour-and-a-half, and then cocktail hour doesn’t start until 5 or 6. On New Year’s Eve, we really didn’t want to tie up everybody’s full day, then have time where there was nothing going on. We wanted it to be a seamless process.

We had to work with a lot of different restrictions. Some churches don’t allow any ceremonies to happen on [New Year’s Eve], and others have events that go on. St. Augustine was really great. They were able to accommodate us with a much later ceremony so our guests wouldn’t have that awkward stretch of time. Our ceremony started at 4, and cocktail hour started at 6:30, but the doors opened at 6. The church was pretty close to the Down Town Club, so people were able to go straight to the cocktail hour. 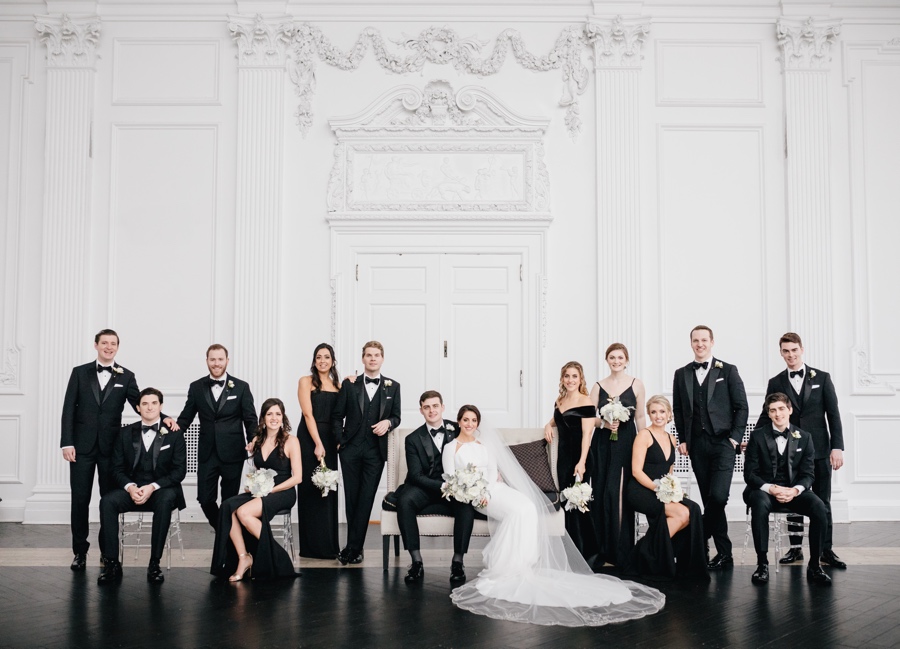 We adjusted the rest of the timeline … so we had a 90-minute cocktail hour, then dancing and dinner, and then more dancing. Right at 11:30, the staff put out some New Year’s Eve décor I’d ordered: streamers, glasses, and accessories for everyone to use. As we were getting ready for the countdown, everyone had a glass of champagne.

Our wedding song was … “What Are You Doing New Year’s Eve?” It’s more of a classic, slower Christmas song, but the band was able to create a version that was a little more lively for us. We used City Rhythm from BVTLive! They were really great with the countdown and keeping everything on track. They played “Auld Lang Syne” right [at midnight], then started with dance songs right after. 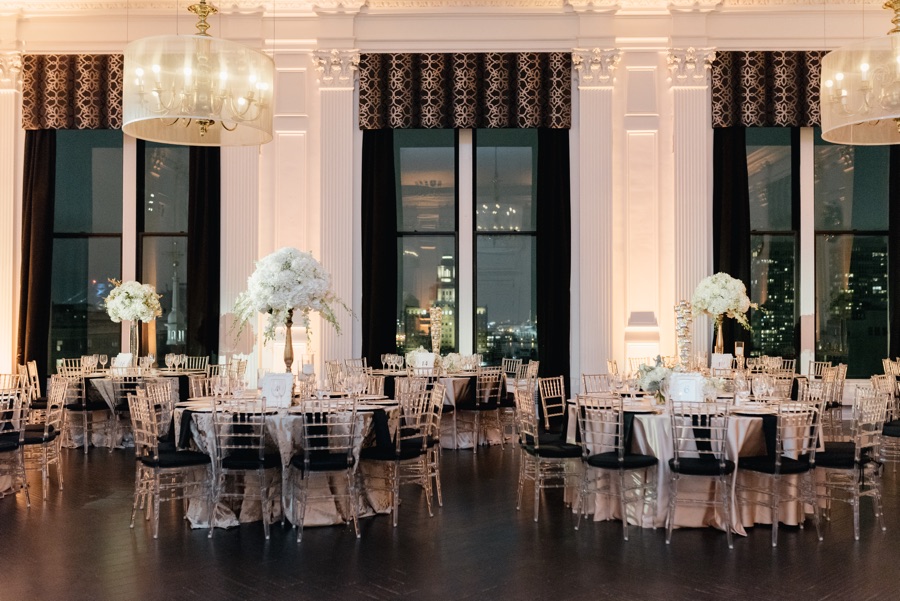 The couple worked with Susan Norcross of The Styled Bride to plan a “very classy, very formal” event.

I would recommend anyone doing a New Year’s Eve wedding get … Flutter Fetti confetti sticks. You flick them and they shoot out confetti. We made sure everyone had one, if not two, and at midnight we had about 200 people at midnight flicking confetti to celebrate. Conor and I were in the middle of everything, the band was playing, and it gave us some really great pictures. I did have to get them approved with [the venue]—they verified the type of confetti would be a relatively easy cleanup for the staff.

Dancing went until … 1 o’clock. We added on 30 minutes because we didn’t want to do a New Year’s Eve celebration and then everybody get kicked out. 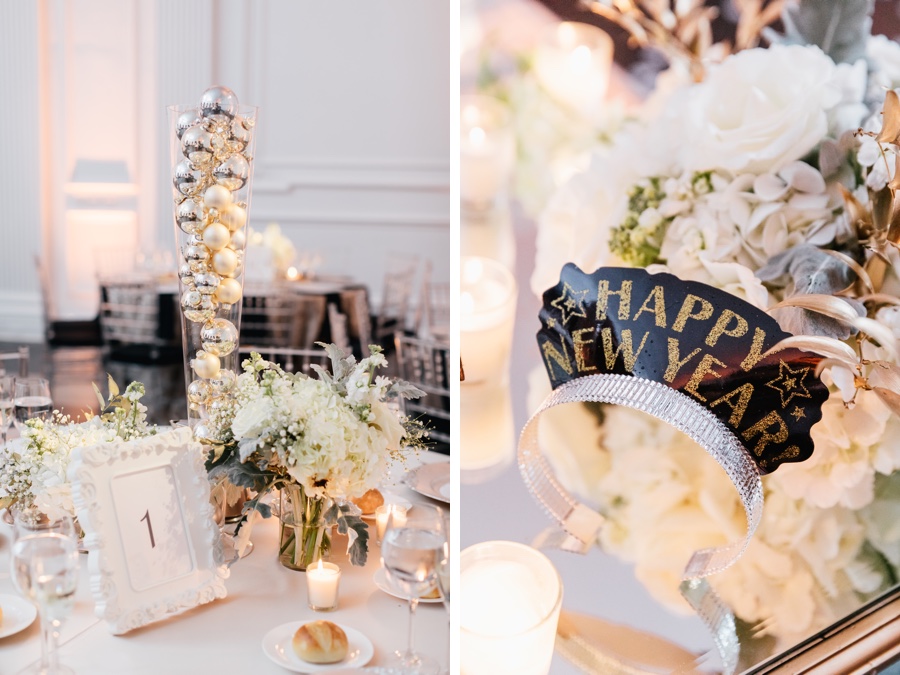 Fabufloras spray-painted some greenery in the tabletop arrangements silver to keep with the metallic theme of the evening.

Our guests … loved it. Of all ages, too. Our friends thought it was the best thing ever because they had NYE plans built in, and they were going to be with everybody they wanted. Our family was extremely excited, too. Connor’s grandmom came from Dublin and was thrilled to get dressed up with her extended family.

We tried to have … an after party, but that was difficult because there were so many other events going on. We wanted to do the rooftop bar at the Hotel Monaco because that’s where we were staying, but we’d have needed to buy tickets, even though we’d be arriving at 12:30 or 1. We ended up just having a group go back to the lobby for champagne, but I think we were able to give everyone the full experience at the reception. 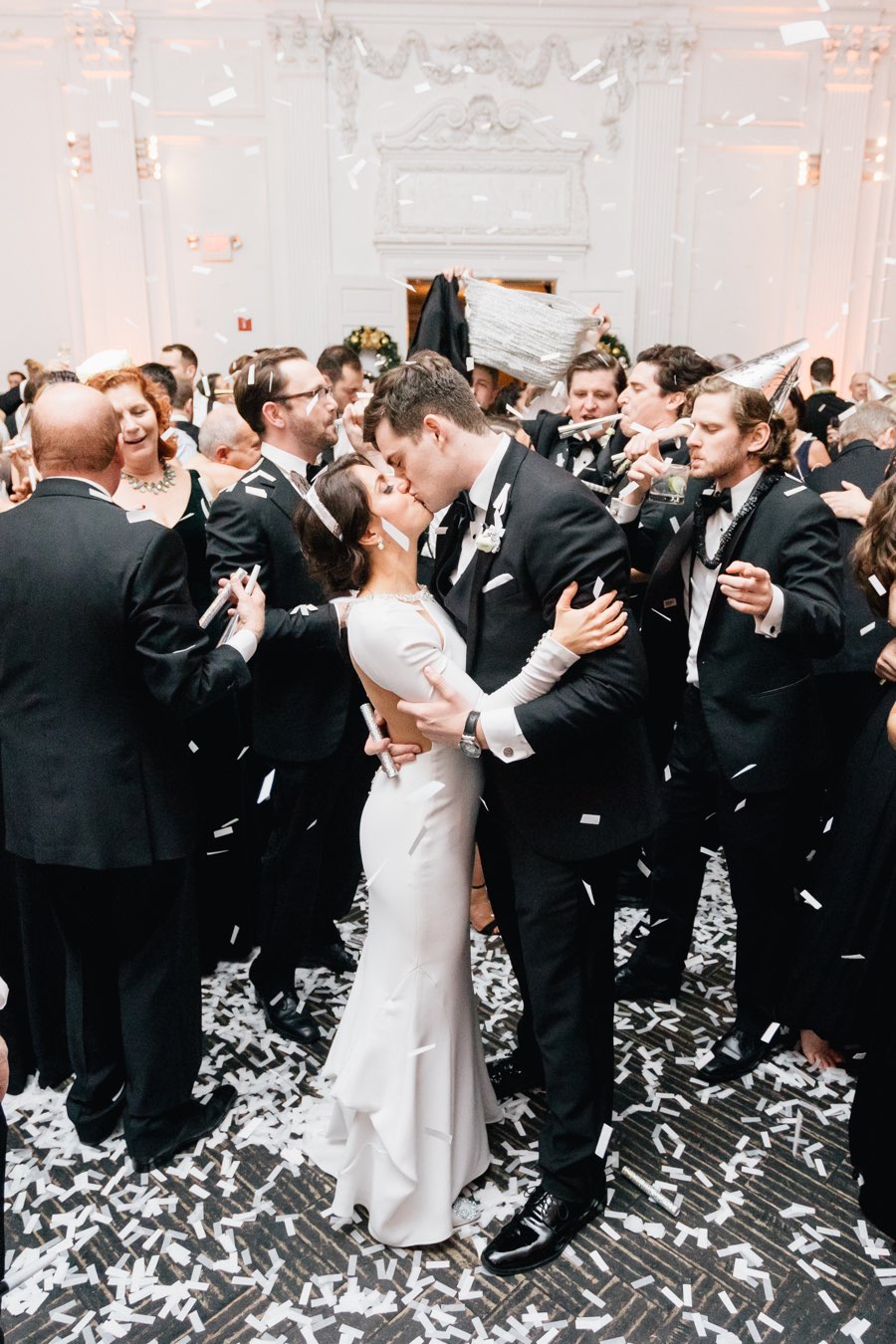 I would caution … If you particularly love Christmas, if that’s your big holiday, it could be a little difficult to do a New Year’s wedding. It was more challenging than I’d anticipated to do all the final details that close to Christmas. It created a pretty hectic few days in between Christmas and New Year’s, and Christmas was a little overshadowed.

Having our anniversary on New Year’s Eve … is really special for us. It makes us appreciate the holiday a lot more.