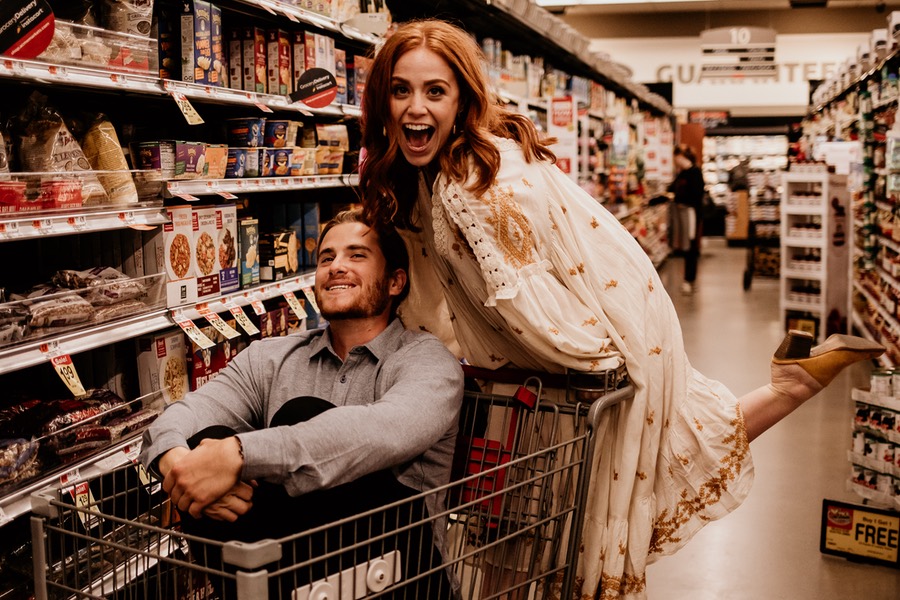 Fishtown is Philly’s most buzzed-about neighborhood, so it makes sense that many couples flock to this part of town for their weddings — and to celebrate their engagements. This local duo hit up all their favorite Fishtown spots during their date night-themed Fishtown engagement photos captured by Lydia Joy. Take a peek at the adventure that started at the El and ended at Joe’s Steaks — and made many other stops along the way. 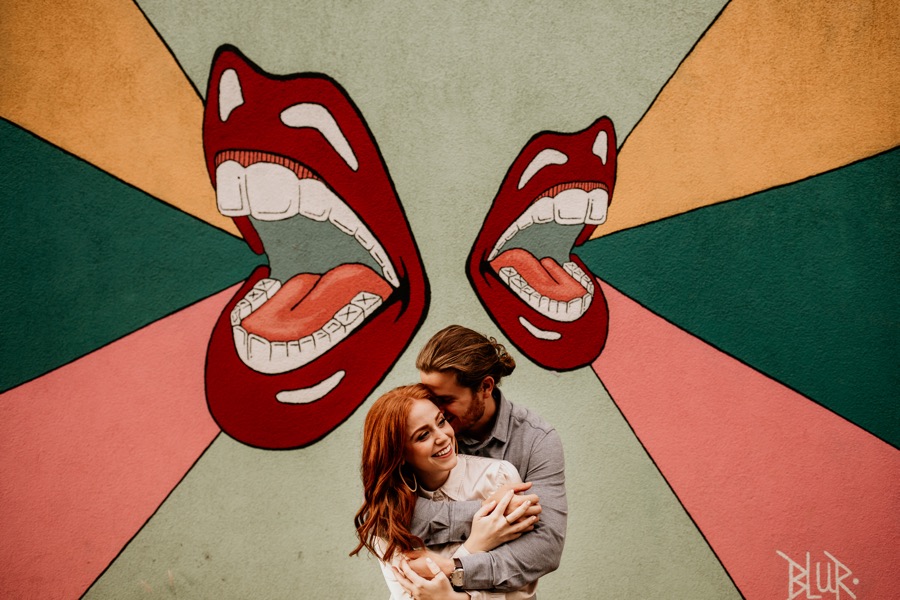 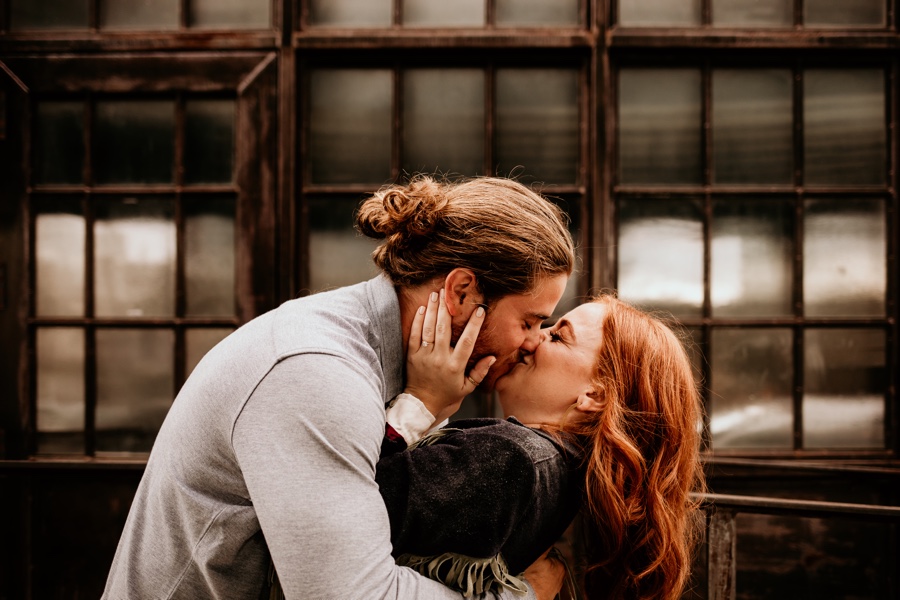 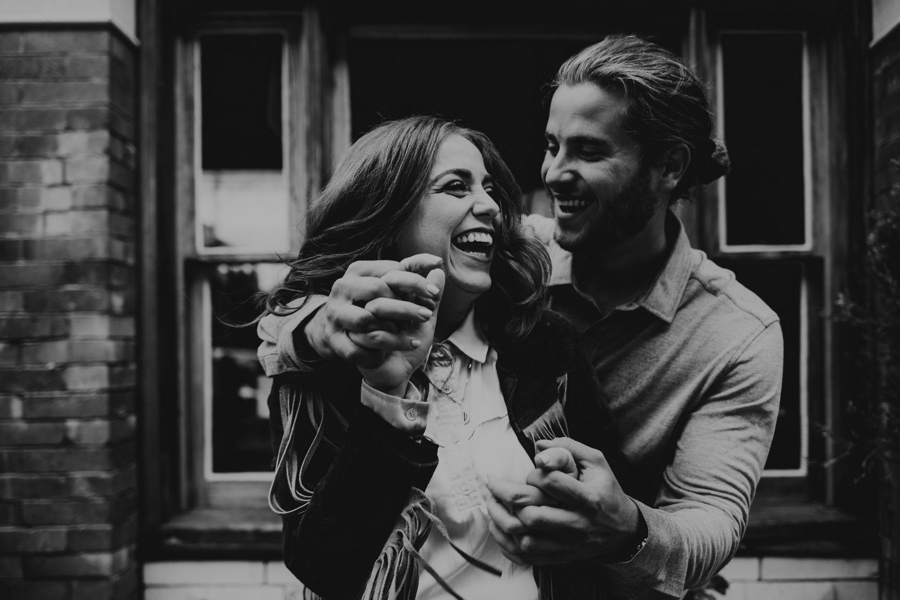 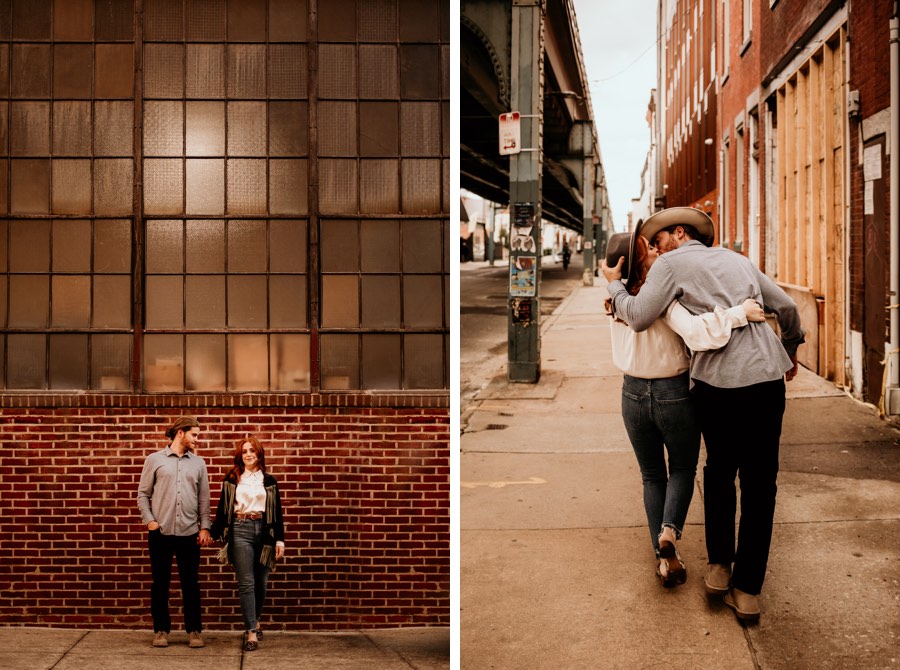 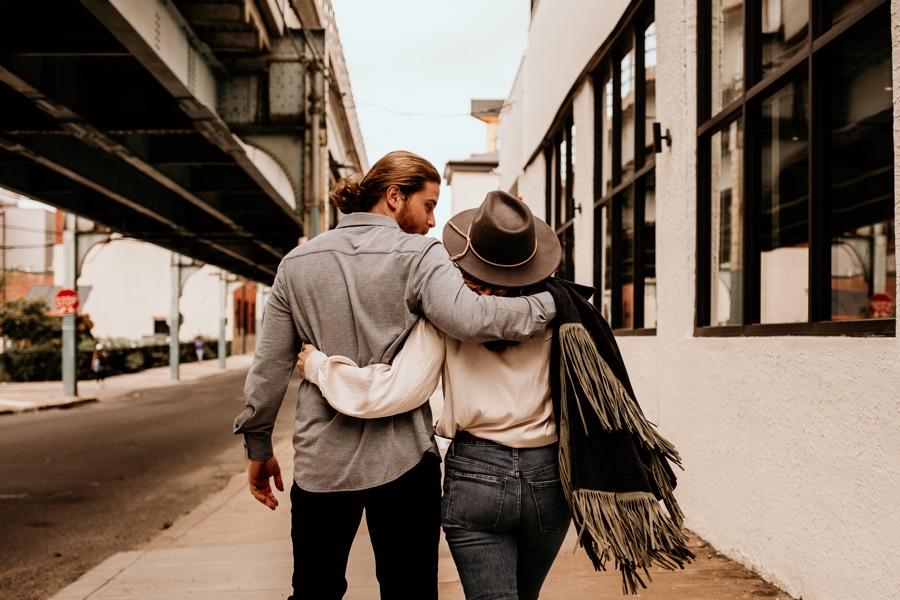 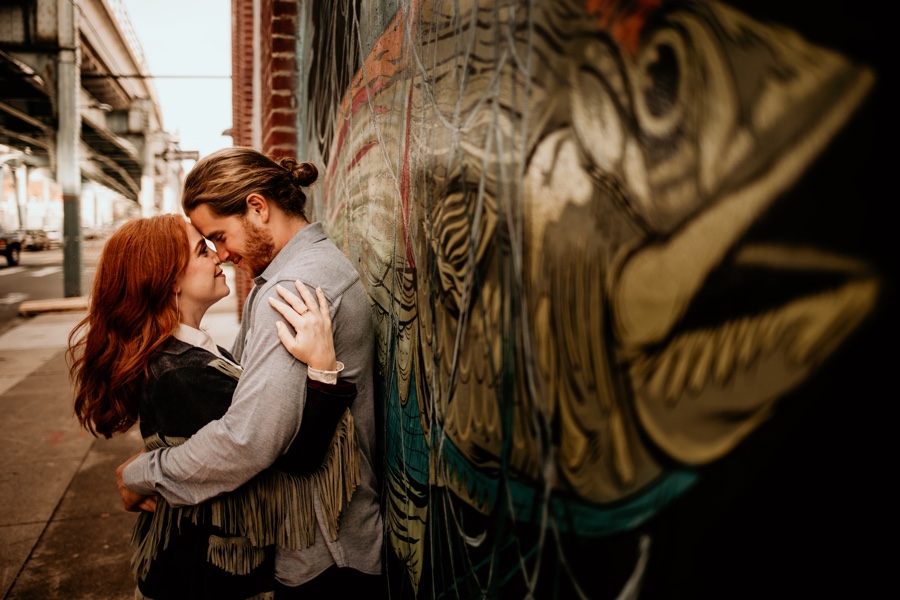 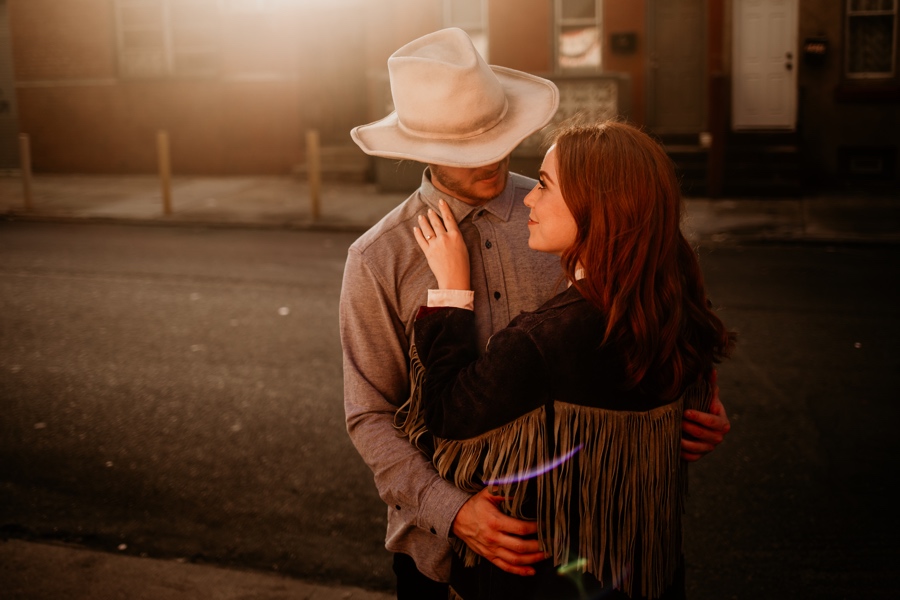 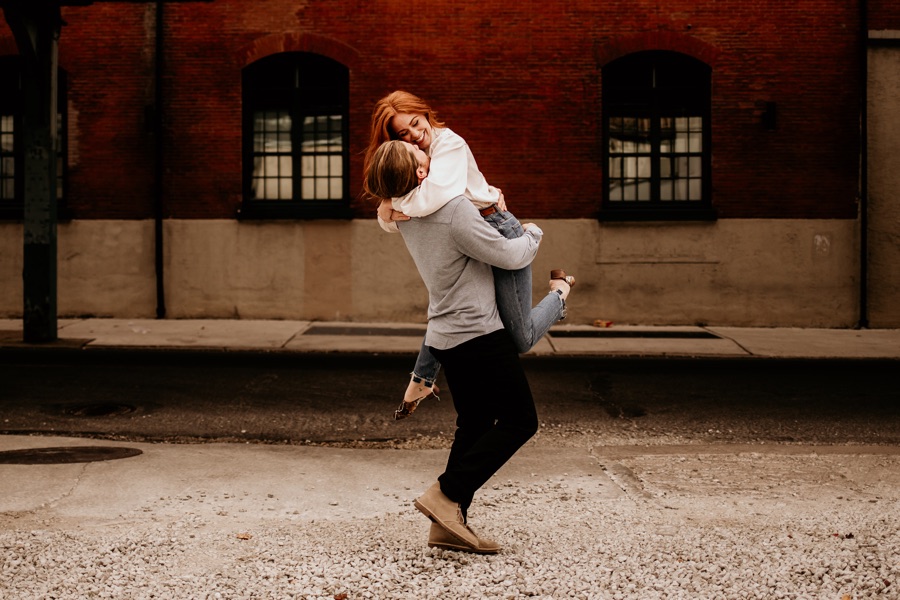 How they met (as told by Alyssa): We met on dating app Hinge (millennials these days). After talking about our mutual love for travel, music and nachos, we decided we couldn’t wait to meet for … nachos and beer. After that, the rest was history! We both left the first date thinking it was too good to be true, and it still feels that way today. We met in January 2018 and were engaged by June 2019 — when you know, you know!

They Love Supermarket Sweep, So This Guy Proposed With a Philly Version at Acme

The engagement (as told by Colin): I planned the proposal for June 22nd at one of Alyssa’s favorite spots, Elfreth’s Alley. After everything was set, Alyssa made plans for the 22nd that ruined my plans. I started scrambling to try to change the date, when Alyssa randomly fell in love with ‪June 21st — the summer solstice. I convinced her we needed to go out to a really nice dinner to celebrate such a great day. At dinner, she had no idea what was to come and brought up my “commitment issues” multiple times. After dinner, we strolled to Elfreth’s Alley, where I got down on my knee. At first Alyssa wasn’t sure what to think because I was known for joking around with her about proposals. She really didn’t believe it was real. After a lot of tears, she finally realized it was and said yes. We headed back to Fishtown, where our friends and family had gathered at Frankford Hall to party the night away. 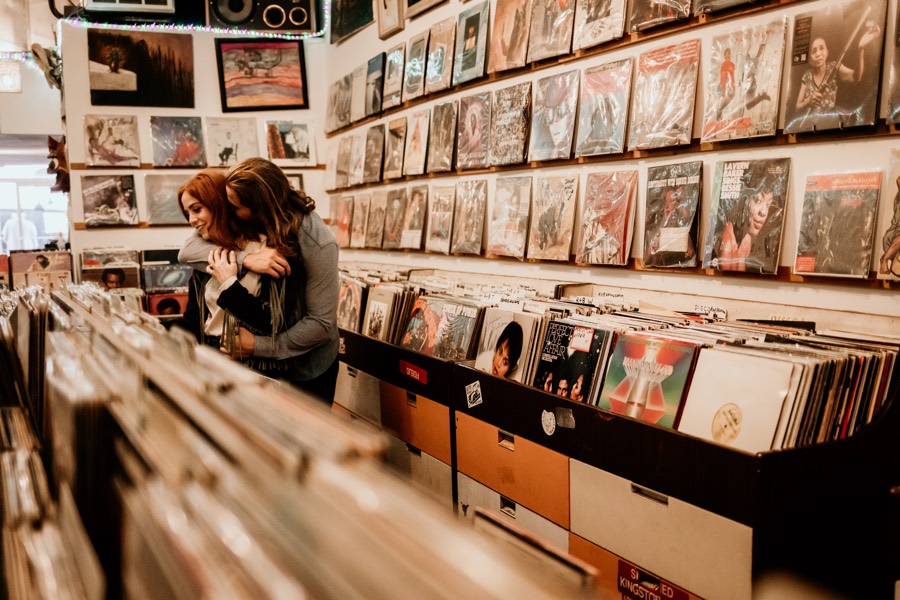 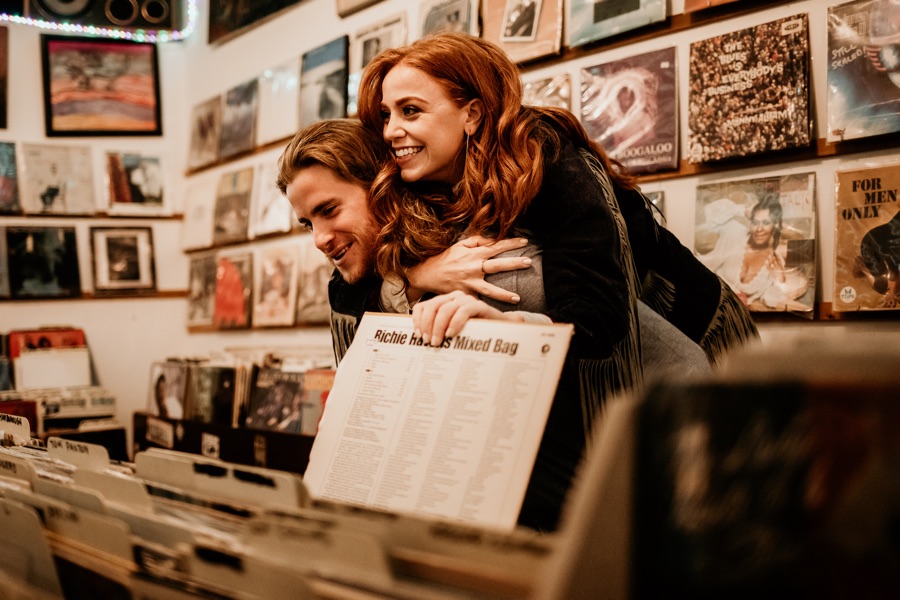 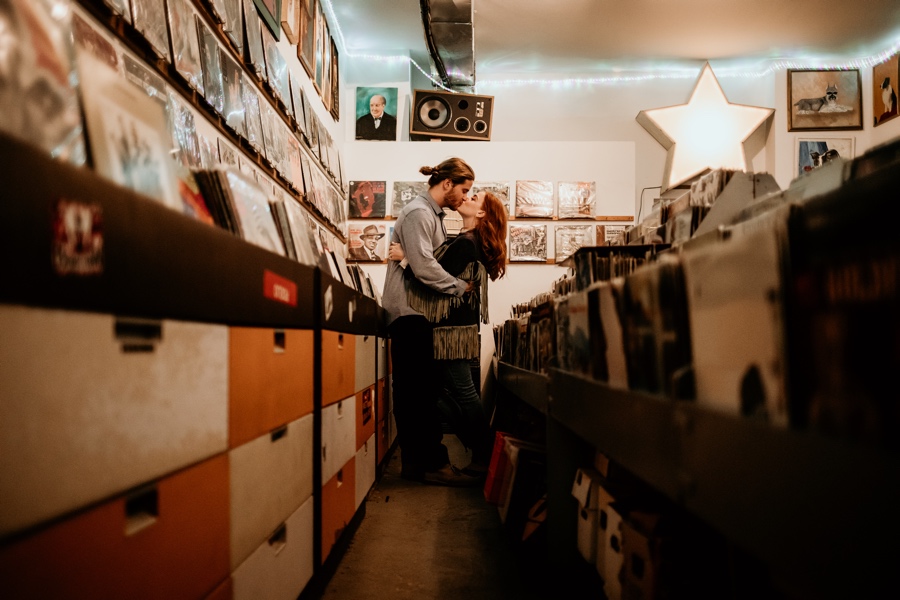 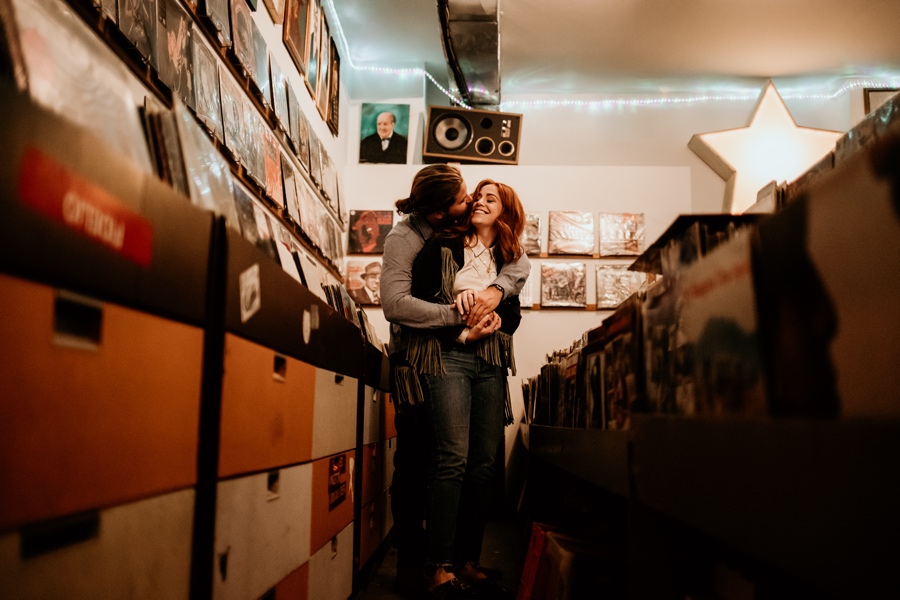 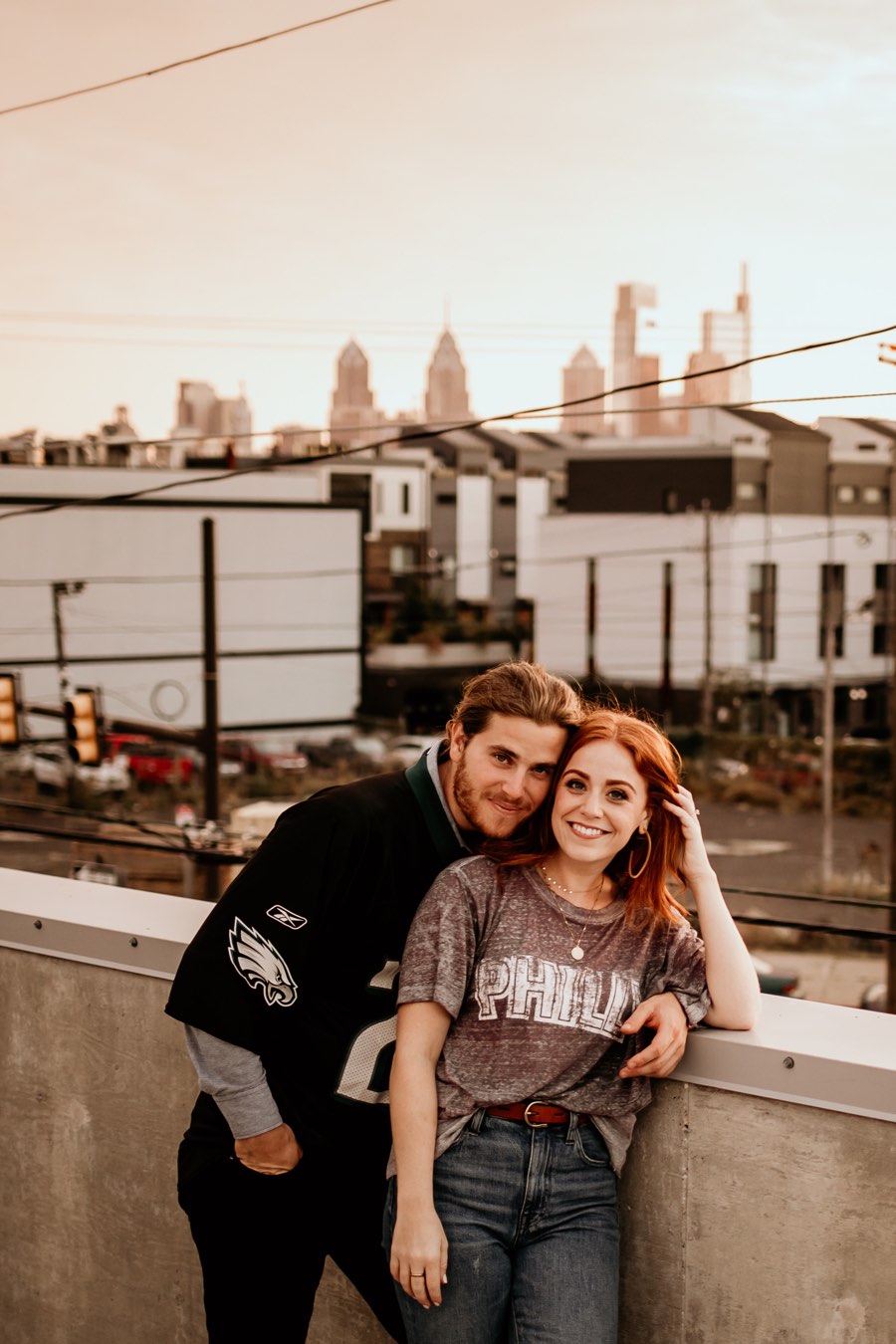 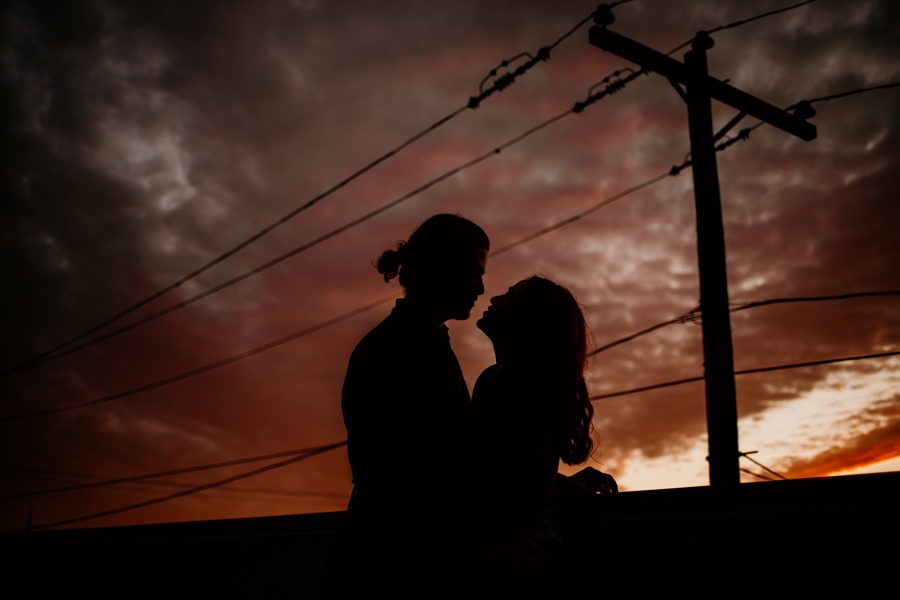 The “date night” engagement session (as told by Alyssa): We were such a great match with photographer Lydia from the start because of her date-night approach. Before meeting her, we had the idea to do a shoot around our favorite spots in Fishtown. Fishtown is important to us because it’s where we first started to grow as a couple. Living so close, we were able to explore all the bars, venues and hidden-gem nacho spots. After reaching out to Lydia and outlining some locations we wanted to shoot at, we were thrilled to find out she had a date-night approach to her engagement sessions. We wanted to do something normal and everyday to really capture who we are as a couple at this time in our lives.

Shooting under the El (as told by Colin): Alyssa works in the city and takes the El ‪Monday to Friday. It’s pretty awesome to commute to work and see some really beautiful and unique street art, especially in such an unexpected area.

Shooting at the Philadelphia Record Exchange (as told by Alyssa): We both share a mutual love for music and collecting records. Music is especially important in Colin’s life — he plays in a band called The Barker Brothers with his brother — so we definitely wanted to incorporate it into our shoot. 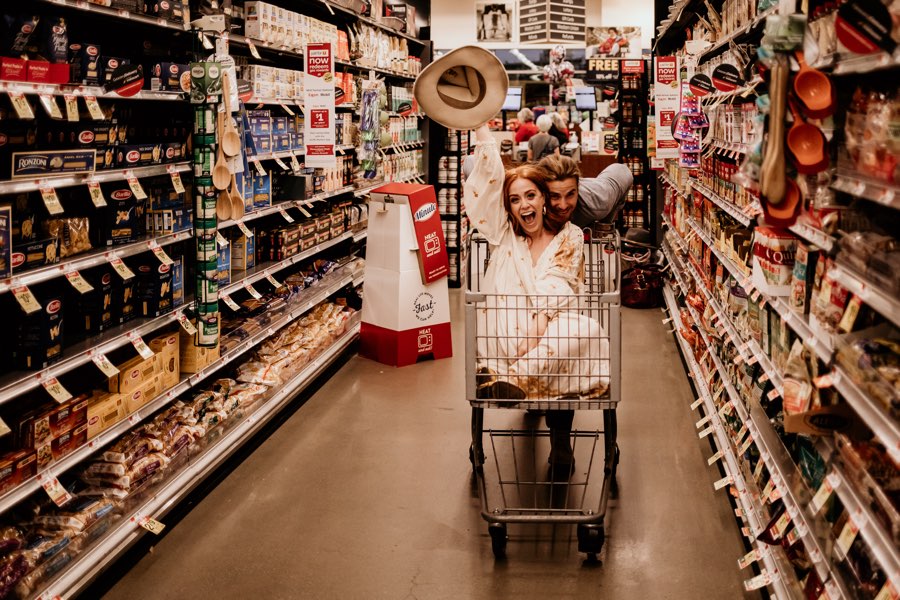 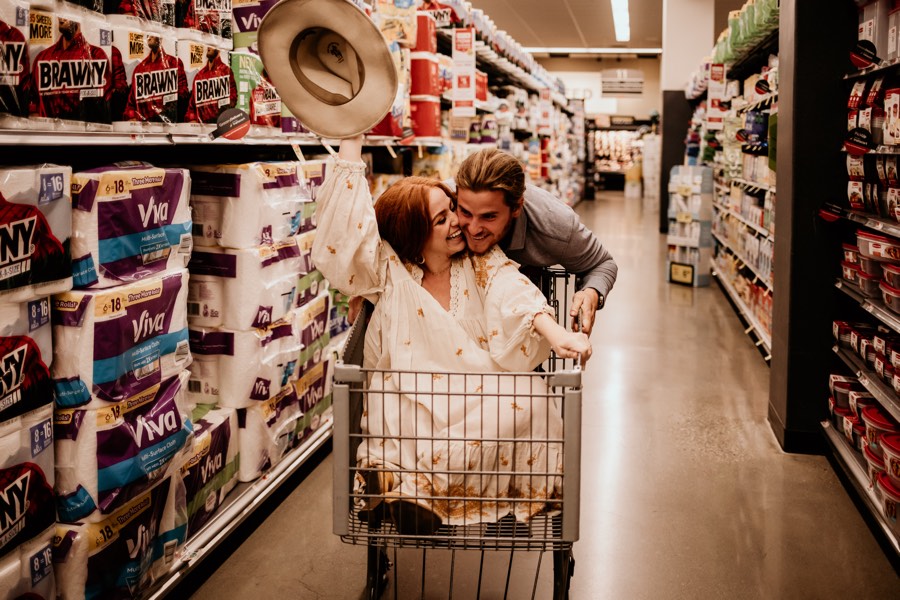 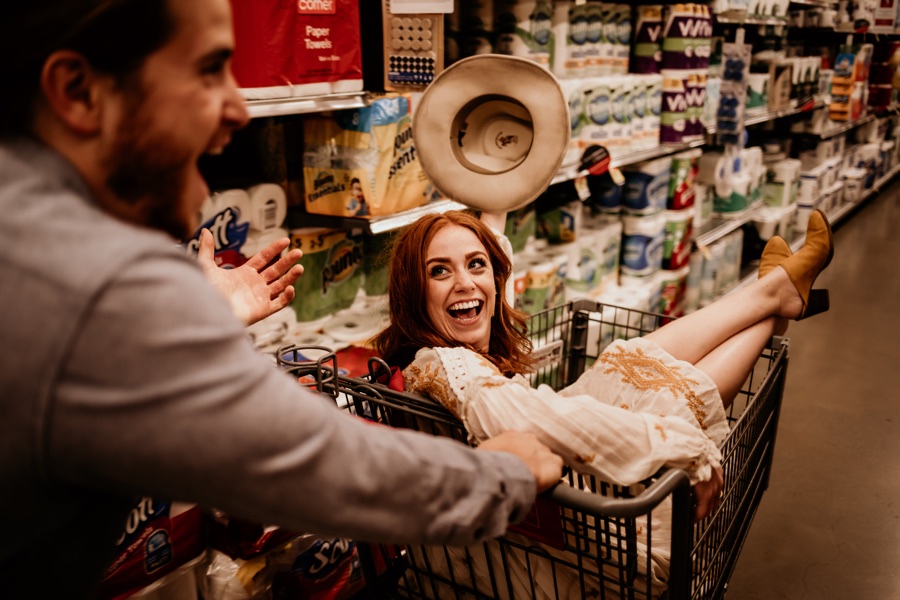 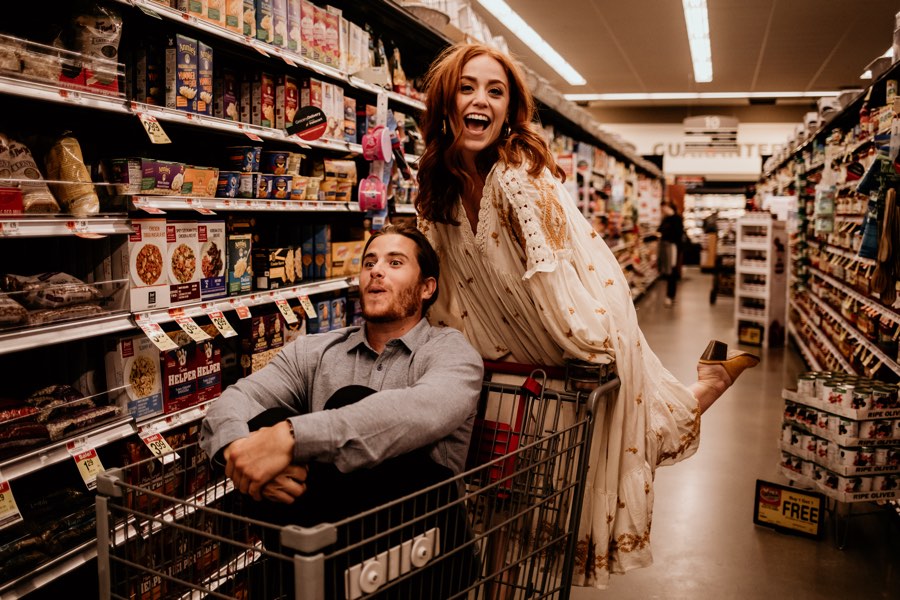 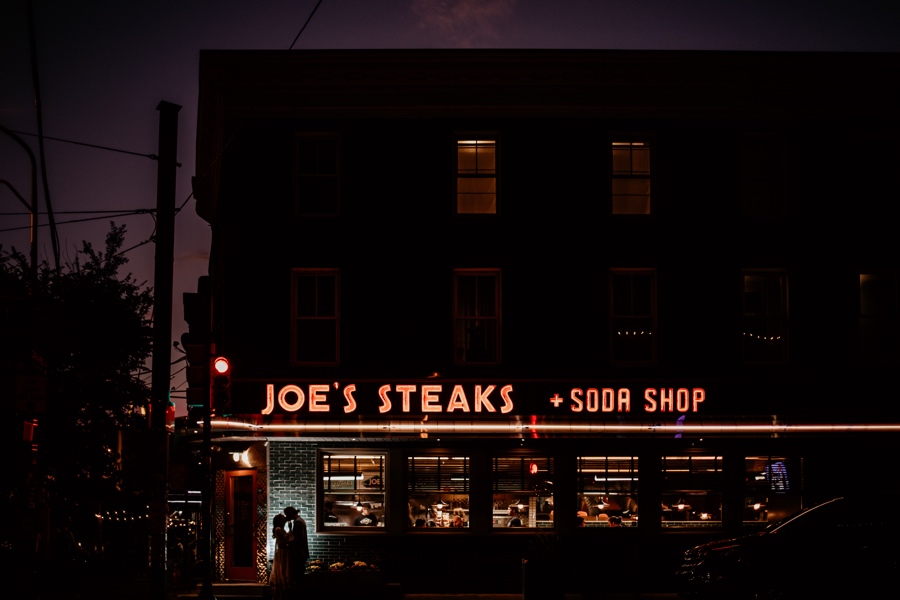 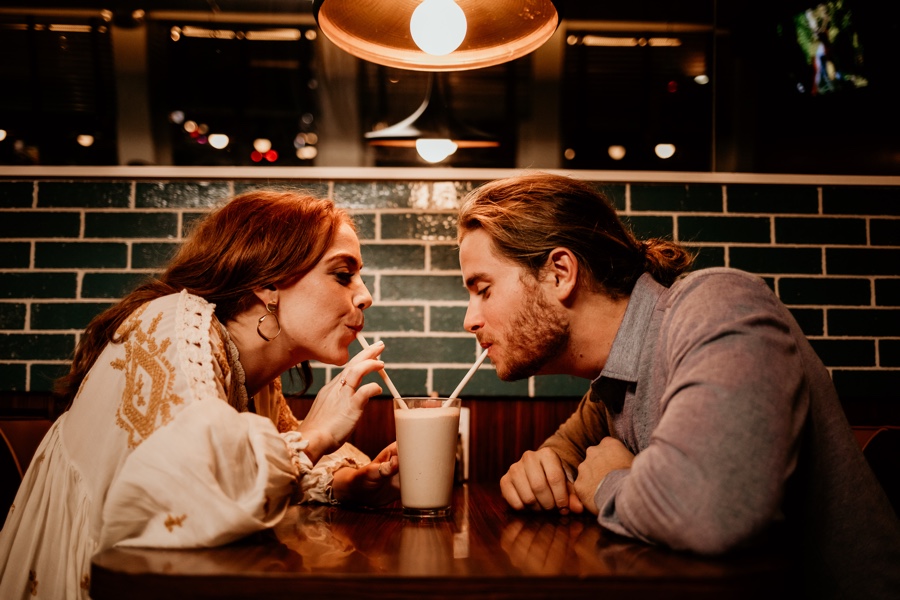 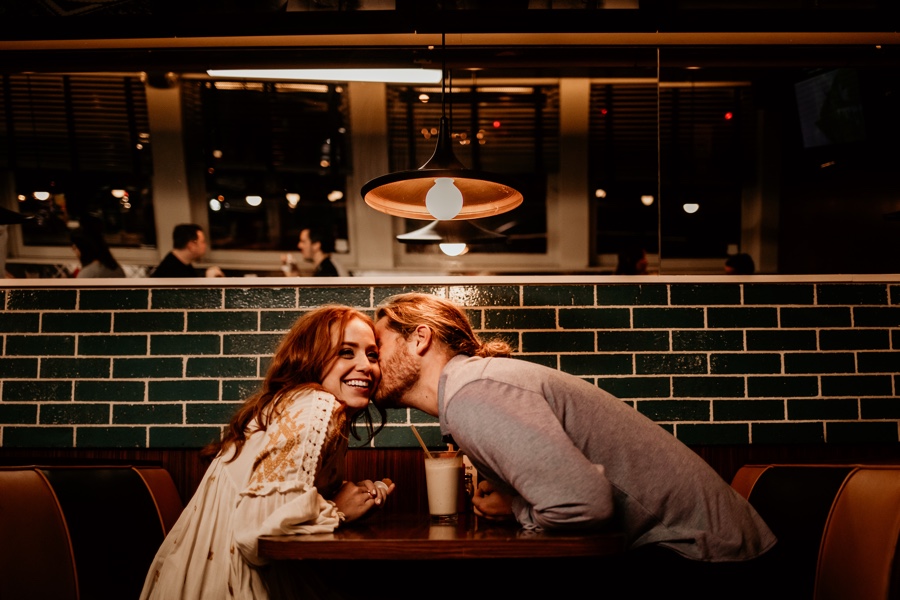 Shooting inside Acme (as told by Alyssa): We think one of the best views of the city is on top of the Acme, and we laugh about it often during our grocery trips. Cue Lydia’s idea to actually go inside of the Acme to shoot. This made for some of the funniest and most memorable photos. Also, it can’t get more real than a couple having to grocery shop.

Shooting at Joe’s Steaks (as told by Colin): What gets more Philly than cheesesteaks? Alyssa is a vegetarian, and Joe’s has a mean vegetarian cheesesteak, so it’s the best way for us to indulge in a cheesesteak, fries and a milkshake.