I Had a Taylor Swift-Themed Wedding, And It Was Awesome

The haters are gonna need to calm down. 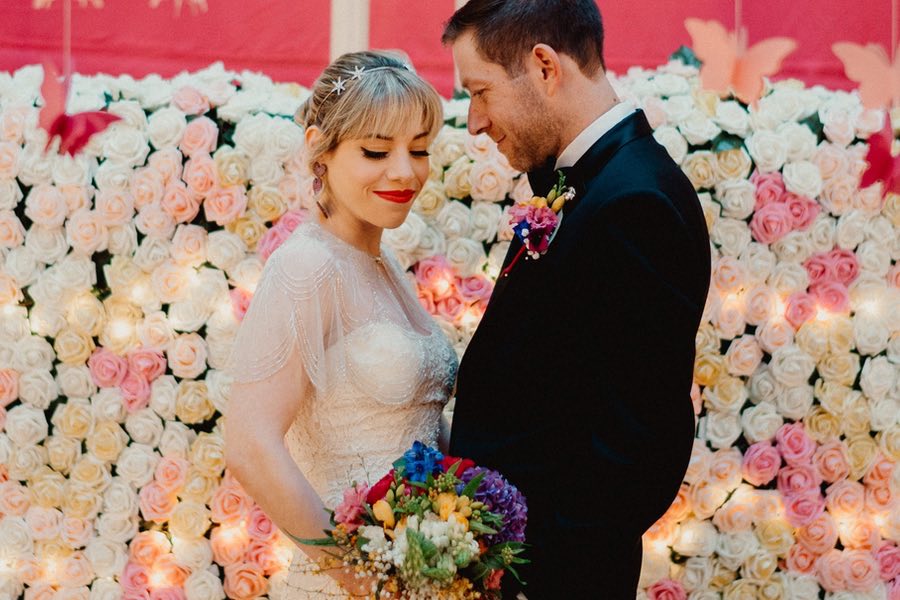 Here at PW, we *live* for a good wedding theme. Whether it’s books, preppy monograms, summer camp, or airplanes, we loving seeing couples take something they love and run with it. That’s exactly what Erin Seeherman did for her October University of the Arts wedding to Moshe Berman, except that what she loves isn’t so much a thing. It’s a person—Taylor Swift, to be exact. Her Taylor Swift-themed wedding caught the eye of the star herself, and today Erin is sharing all the ways she nodded to the singer’s entire discography during her Big Day. Swifties, might we suggest popping in those head phones and tuning into a T. Swift playlist before you read? Erin’s got plenty to choose from.

What I appreciate about Taylor … is that we are conditioned to hate her. She’s this powerful, talented woman who unapologetically shines brighter and works harder for success that others often believe she’s not entitled to. People think she only writes about high school and heartbreak, but many artists write about that content. I think much of what Taylor writes is layered and taps into greater contexts than what first meets the eye. Oh, and no one can write a bridge like she does. 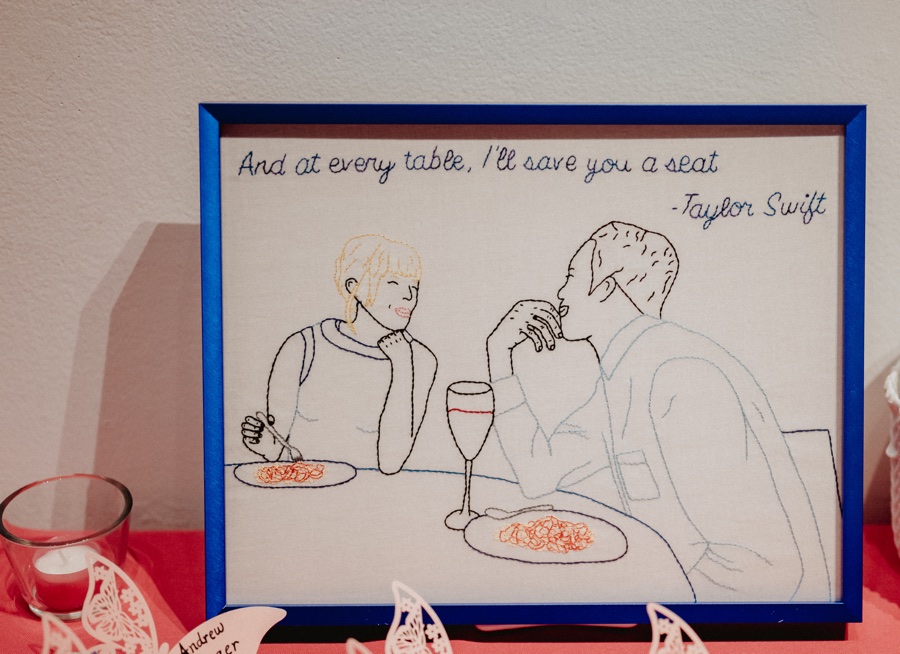 I didn’t really call myself a fan … until the 1989 era. I’d be driving in my car, I’d hear a song, and I’d pull over to Shazam it. The first one was “Blank Space,” and I thought, Oh, Taylor Swift … Okay…, because I’m very much into indie music. I love going to music festivals, I love going to hole-in-the-wall dive bars and listening to new bands. So this was a bit jarring for me.

The next time I pulled over to Shazam a song … It was “Style.” “Style” was the song where I was like, “I guess I’m a Taylor Swift fan now.” 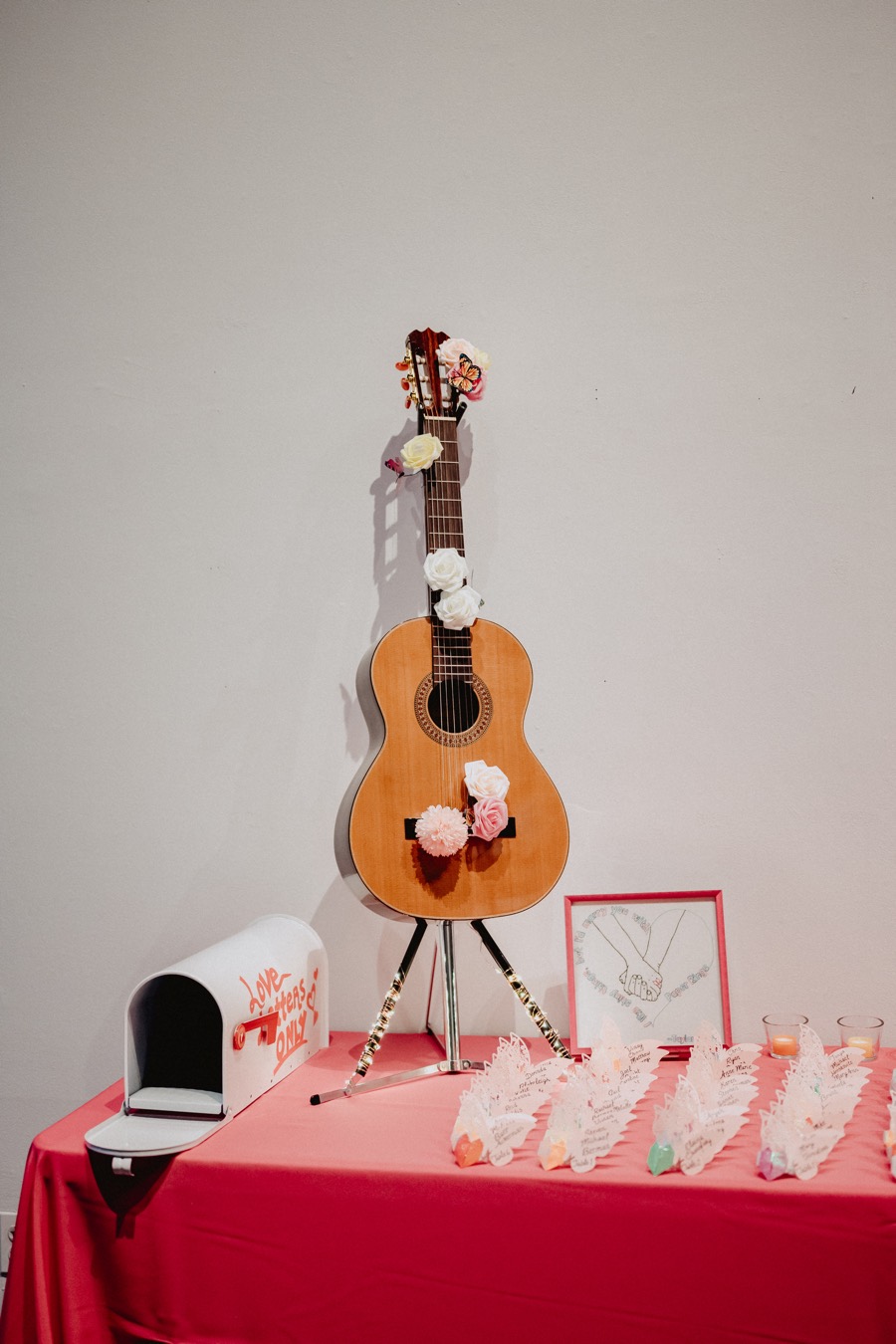 A guitar display needs no explanation at a Taylor Swift-themed wedding. Photo by Pat Robinson

In the 1989 era, Taylor had taken her songs off Spotify. So I had to go on YouTube to listen to her music. This came along with her music videos, and of course there’s that autoplay feature that will take you down the rabbit hole of everything else she’s ever done. I got exposed to so much more of her work that way.

I first met my [now husband] … around Halloween 2016. I was crafting this very elaborate Taylor Swift-themed Halloween costume, which was modeled after one of her costumes from the 1989 tour. Right when he and I started dating, he would send me text messages and asked what I was up to. I was completely honest. I said, I’m in the middle of crafting my Taylor Swift Halloween costume.

I was at the point in my life where I wasn’t going to play it cool. I was going to be very honest and say that I was affixing 1,000 black sequins to a pair of ankle boots to look like the shoes Taylor wore during “Welcome to New York” in the 1989 world tour. I let him know who I am, completely unapologetically, and his response was, “Let’s go to a hardware store and I’ll help you craft the light-up microphone for your costume.” 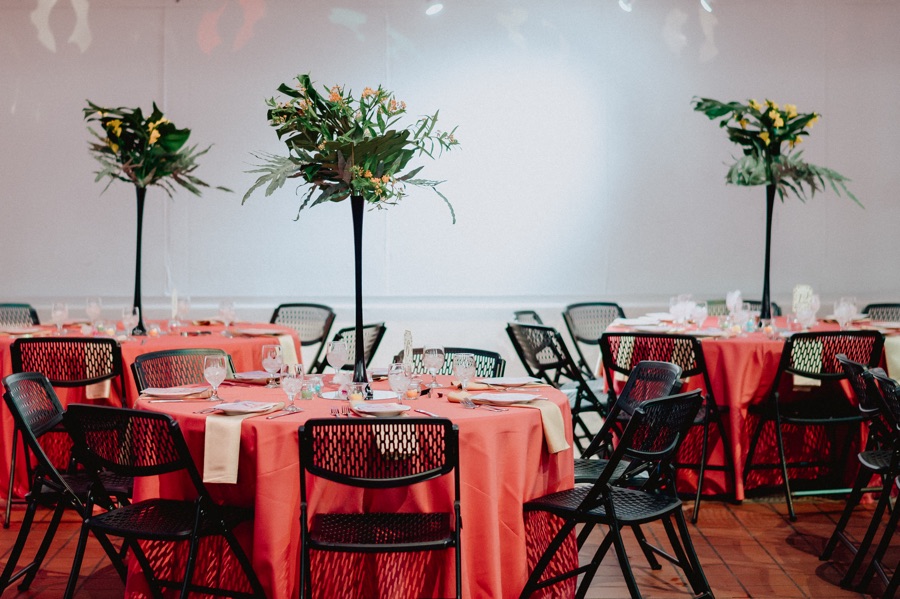 The tropical leaves in the centerpieces were a nod to the song “Cruel Summer.” Photo by Pat Robinson

A year after we started dating … he joked that wanted to propose to me at a Taylor Swift concert. I said, I’m going to hold you to that, and we sort of understood that that was going to happen. We got engaged in Philly, at Lincoln Financial Field, during the Reputation stadium tour.

At first, I wasn’t sure how to incorporate Taylor into the wedding. When we got engaged, it was between eras and Reputation wasn’t necessarily the most wedding-appropriate of themes because it was heavy on darkness and snakes. Early in 2019, though, she started dropping Easter eggs about what her new album aesthetic would be. At that point, we didn’t know that the album would be called Lover, but we started seeing hearts and butterflies and rainbow colors. We squeezed as much as we could out of those little hints before the album dropped at the end of August. After that, we really had just a few weeks to infuse as much of Lover as we could into the event.

Our event programs … used that same pastel ombre coloring as the Lover album cover. The lyrics we used are from the song “Daylight”: “I once believed love was burning red but it’s golden like daylight.” I’m a relationship and sex therapist, so that idea that love should feel like a roller coaster, then maturing to realize that it’s golden like daylight … I thought that was such a beautiful, touching sentiment. 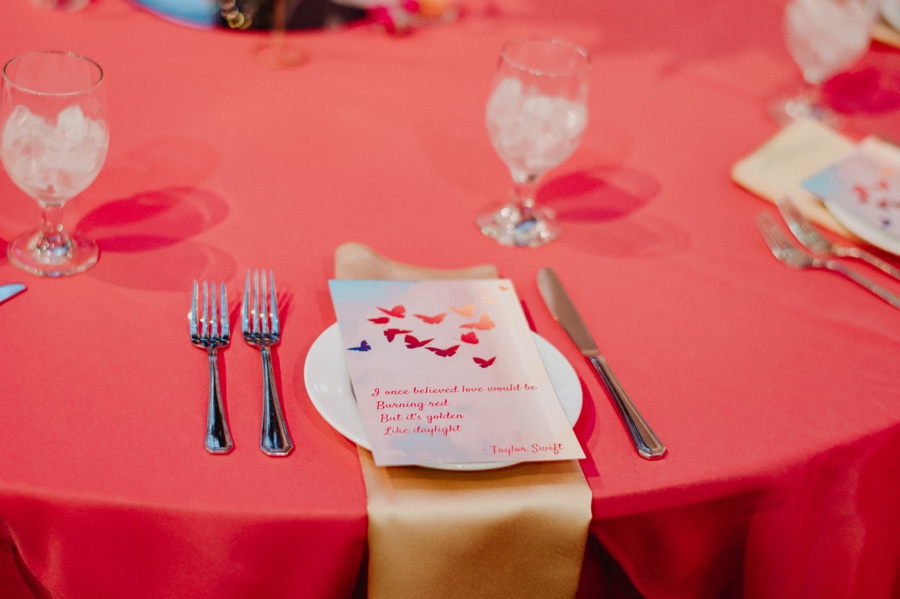 Done in the same pastel ombre as Swift’s “Lover” album art, the event programs featured lyrics from the song “Daylight.”

We strung butterflies around the room. Butterflies have been a large part of the aesthetic in a lot of the advertising Taylor’s done. In the “You Need to Calm Down” music video, she had a butterfly tattoo on her back. Perhaps most significantly, a snake turns into butterflies at the beginning of the “ME!” music video, which was the first single of the Lover era.

We had two signature cocktails. One was called “London Boy,” and the other was called “False God.” Both are tracks on the Lover album. The London Boy cocktail was pink—a strawberry margarita. The False God was also a margarita. It used blue Curaçao instead of Triple Sec, so the drinks were pink and blue—the two colors that are very representative of this album. We also had pastel ombre cocktail napkins that match the album cover. 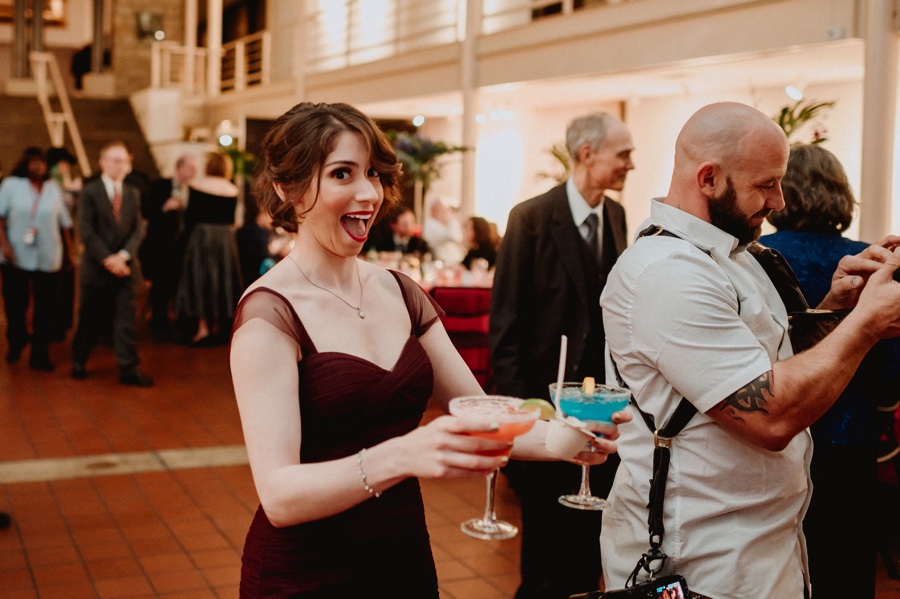 We had rainbow flower arrangements. My bouquet and Moshe’s boutonnière was also rainbow. Rainbow has been very pivotal. There’s the lyric “like a rainbow with all of the colors” in the song “Me,” and [Taylor] has spoken of her support for the LGBTQ community and used a lot of rainbow imagery as well. We wanted to have a lot of colors to show our support.

Our card box … was a white mailbox. I painted the side with red paint to read “Love Letters Only” to match one of the props in the “You Need to Calm Down” music video. 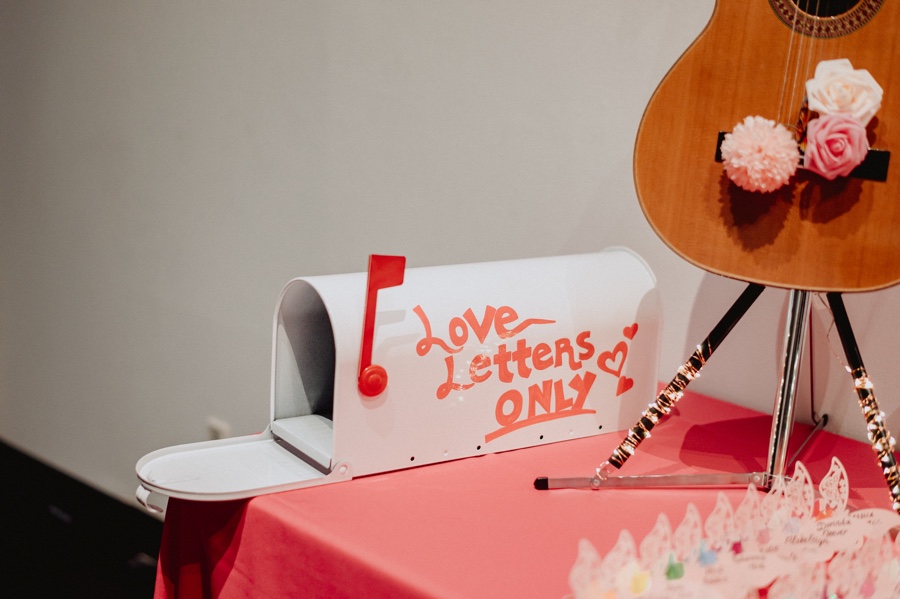 Erin and Moshe’s card box was inspired by a mailbox in Swift’s “You Need to Calm Down” music video. Photo by Pat Robinson

Taylor has a song called “Paper Rings” with the lyrics “I like shiny things but I’d married you with paper rings.” So I knew pretty much instantly that we’d be folding a lot of origami paper rings. We found rainbow iridescent origami paper, and my wonderful husband folded over 100. We glued paper butterflies to the side of them and wrote all of our guests’ names. We had butterfly paper ring place cards. 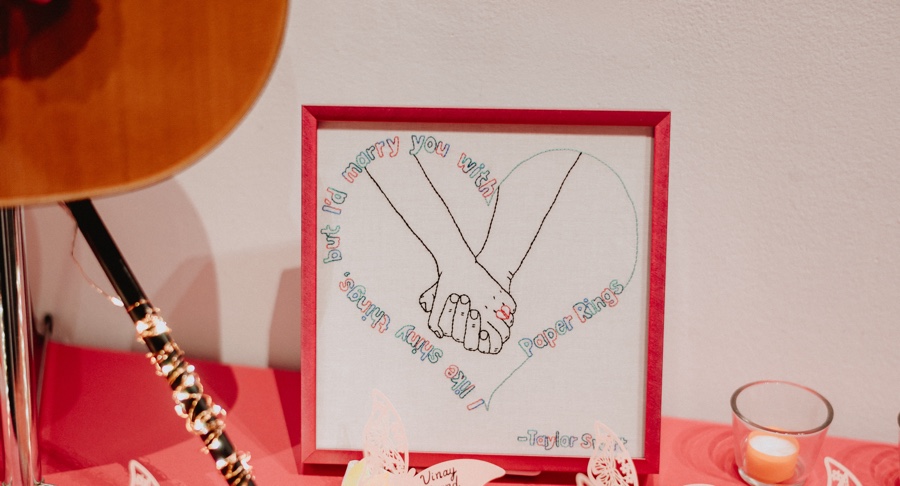 I constructed a flower wall … to match the one Taylor’s incorporated into her stage design for a number of performances this year. That was the most elaborate of all our projects. I ordered a 14-by-6-foot wall to which I fastened, by hand, 2,542 flowers. I ended up on that number because Taylor Swift loves Easter eggs, so I decided to be as extra as she is. If you add up the numbers in 2,542 you get 13, which is her lucky number. Two can play that Easter egg game, Taylor. 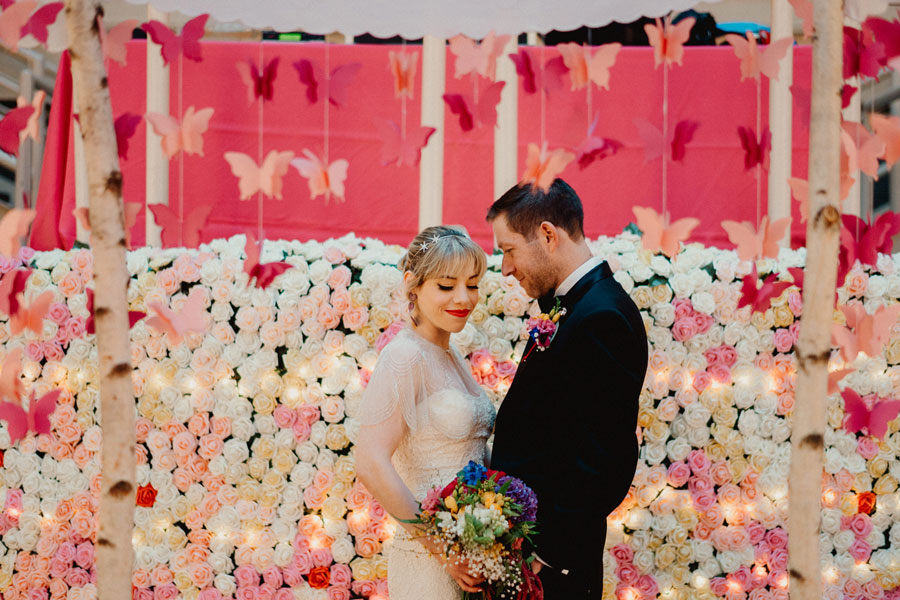 Erin affixed exactly 2,542 flowers to a backdrop because the digits add up 13—Taylor’s lucky number. Photo by Pat Robinson

The playlist was … at least 25 percent Taylor. Every special moment during the wedding had one of her songs. We walked down the aisle to a live acoustic version of “Call It What You Want,” the song we got engaged to. We were introduced [at the reception] to “Shake it Off,” and our first dance was “Lover.” I surprised my mother with a mother-daughter dance to “The Best Day,” which is off the Fearless album and sort of a tribute that Taylor wrote for her mom. We closed out the wedding with three Taylor songs: “Holy Ground” from the Red album, “Me” from Lover, and then the last song was a group dance, everyone in a circle huddled together, to “Long Live,” which is from Speak Now. 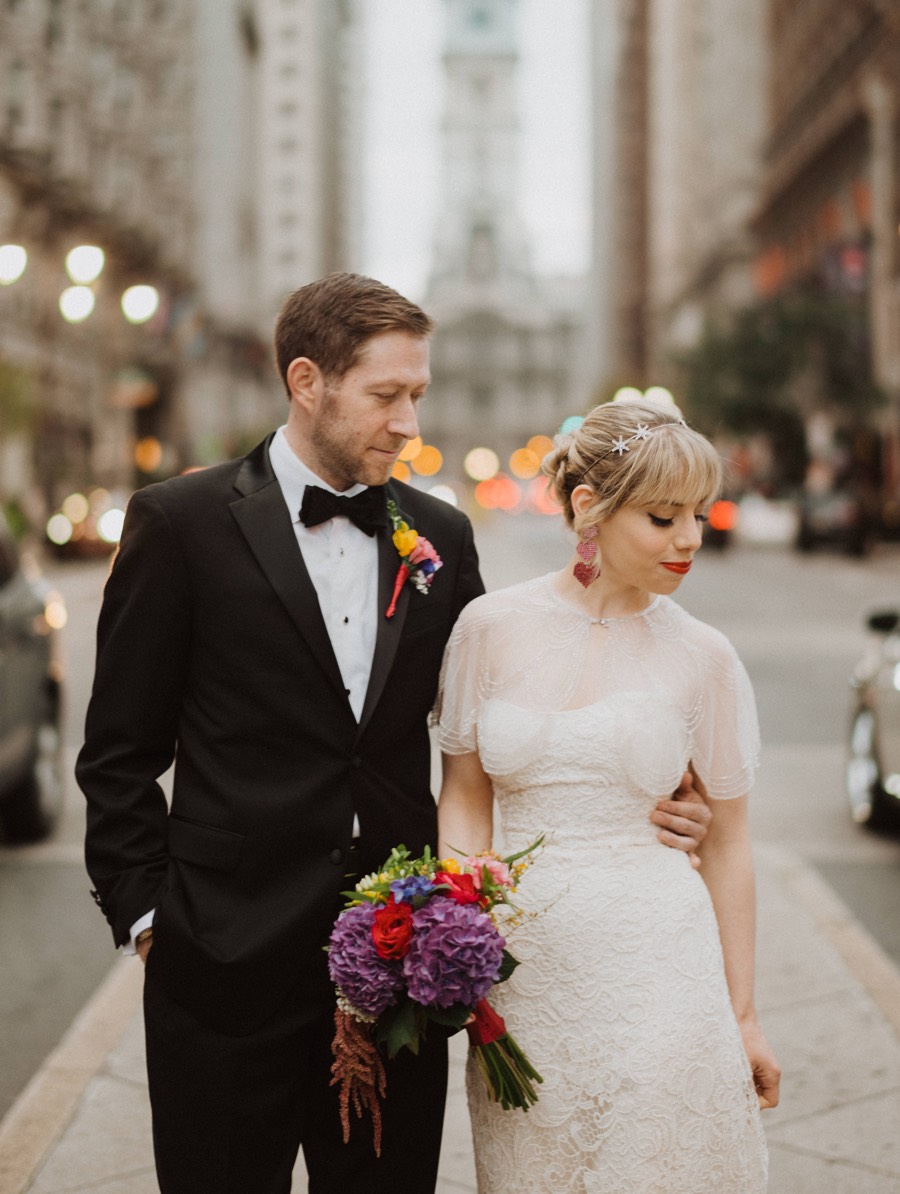 Erin’s heart earrings and rainbow bouquet were both nods to “You Need to Calm Down.” Photo by Pat Robinson

My husband … is a huge Taylor Swift fan in his own right. I tried to take a video of us right after we got engaged. I was showing off the ring, and I tried to get him in the frame, but he’s busy screaming as Taylor’s performing. I keep tapping his shoulder trying to get his attention, and he’s ignoring me to sing along. People keep saying, Oh, he’s a saint for putting up with you, but he’s not putting up with anything. He enjoyed this immensely, and was not being dragged into anything. He had so much fun with it, and I think it made it that much more enjoyable for him that I was having fun with it.