A Britney Spears Impersonator Capped Off This La Colombe Wedding

The RuPaul's Drag Race star flew in from Vegas just for the night. 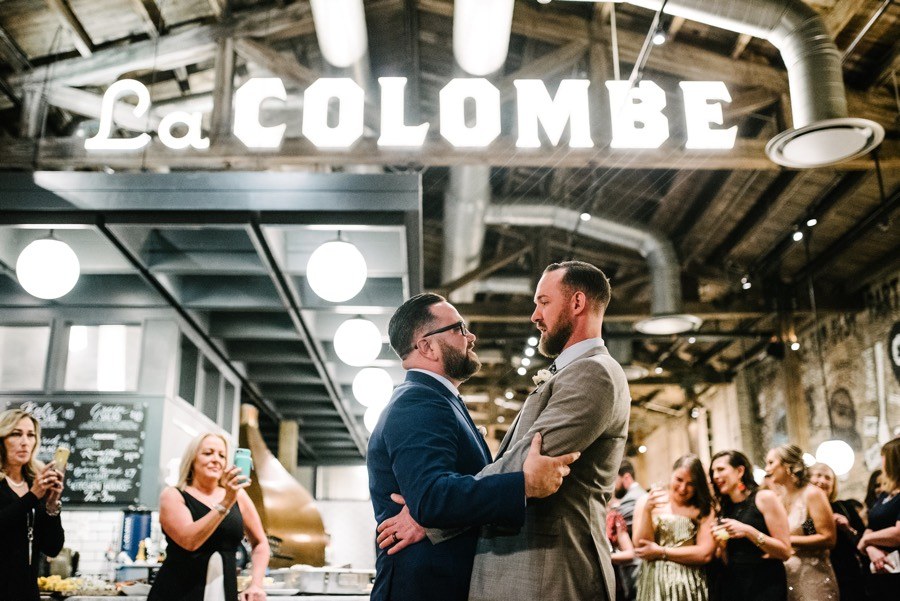 La Colombe is loved by Philadelphians near and far, but one Kensington couple’s adoration just might outdo the rest: They centered their Big Day around the joint. Photographed by AGP Collective, this coffee shop wedding featured La Colombe favorites, lots of greenery, a Zola Bakes rainbow cookie and a Britney Spears impersonator. 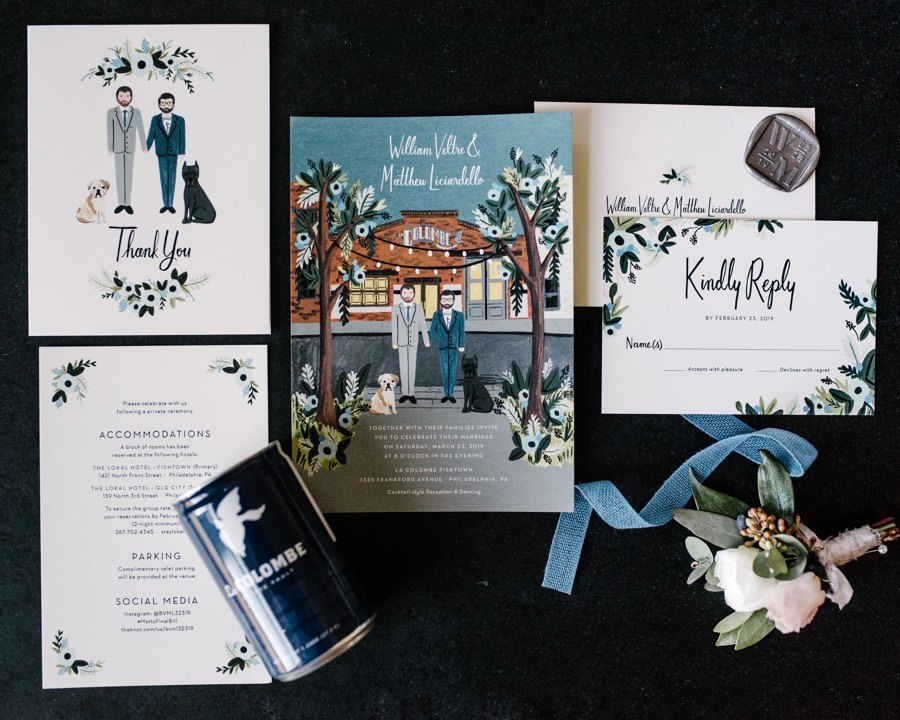 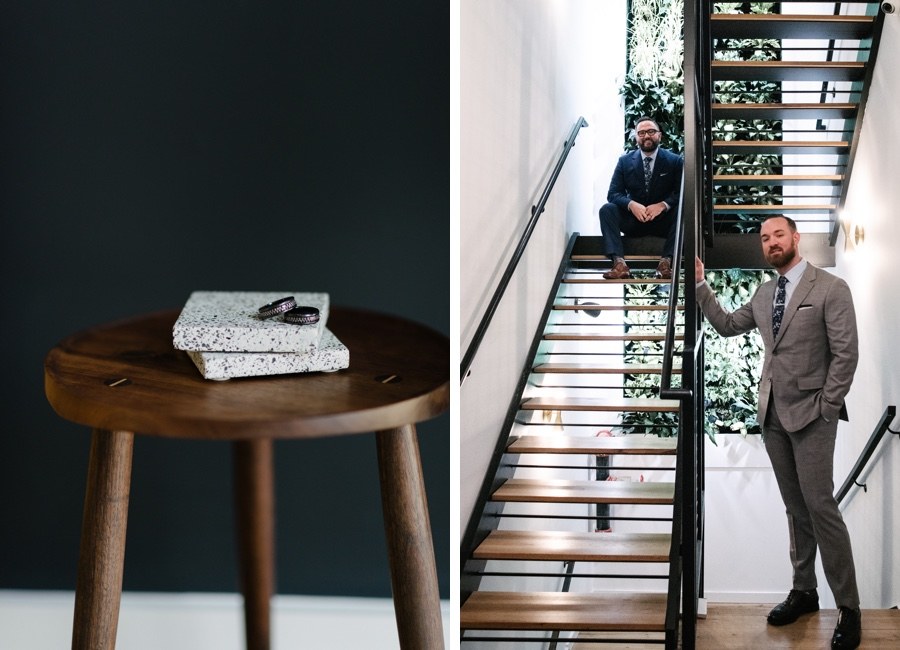 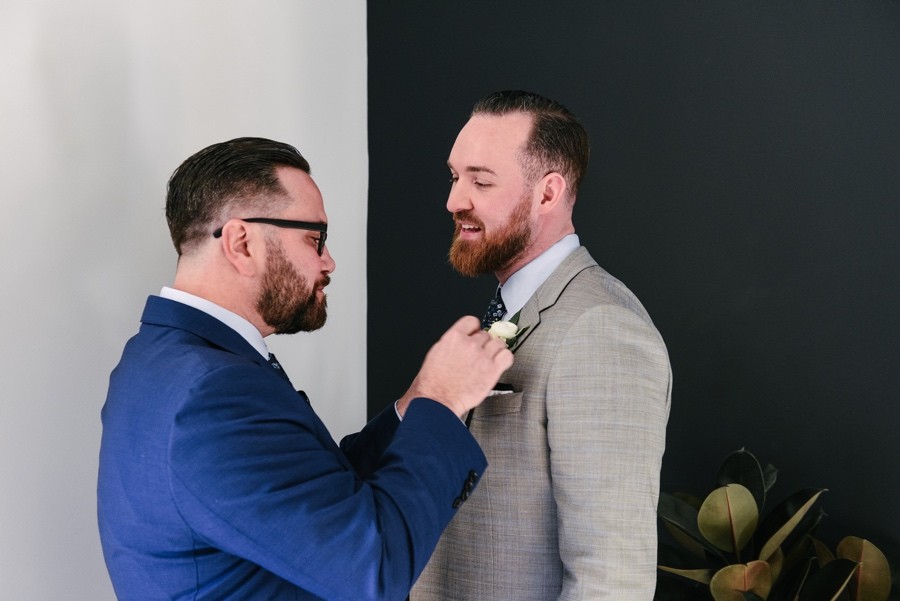 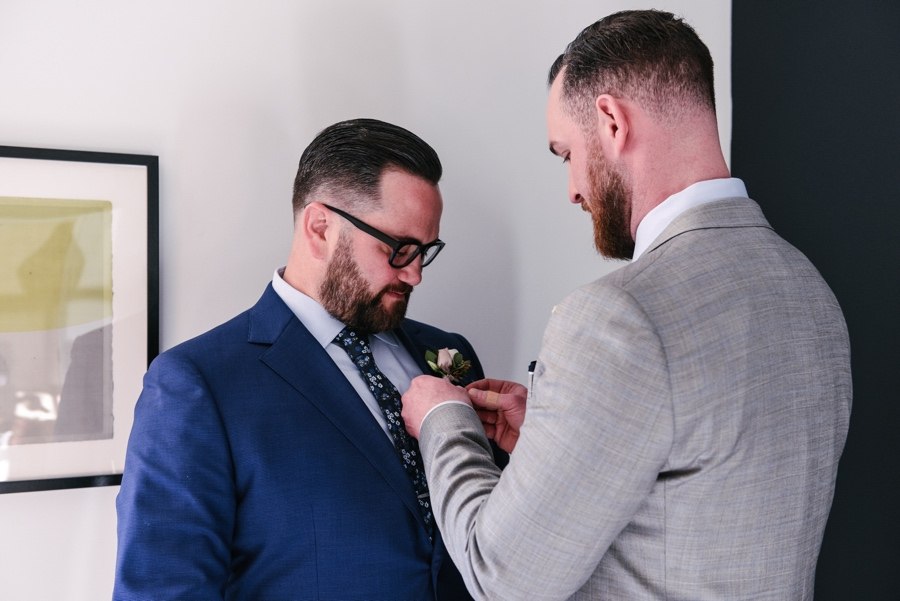 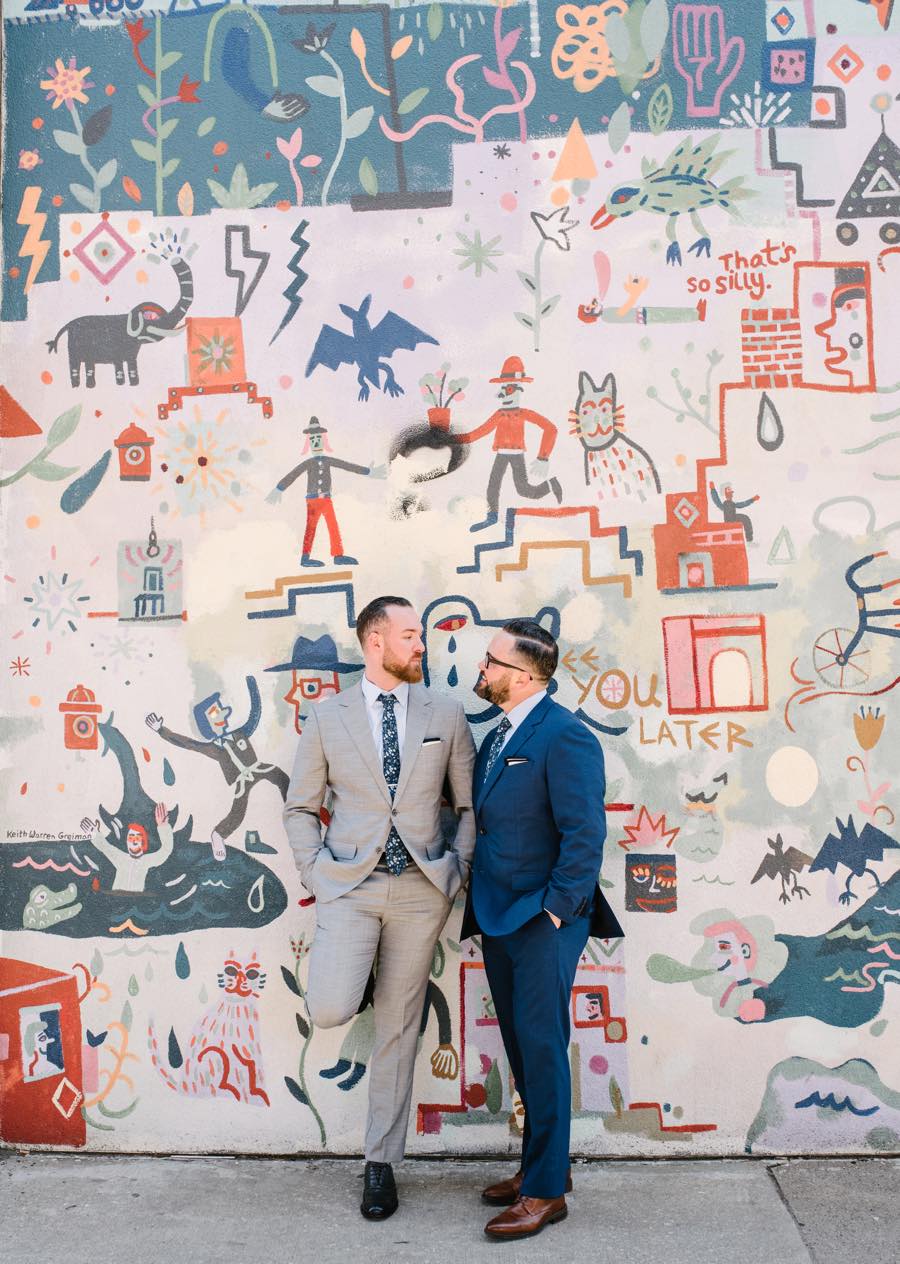 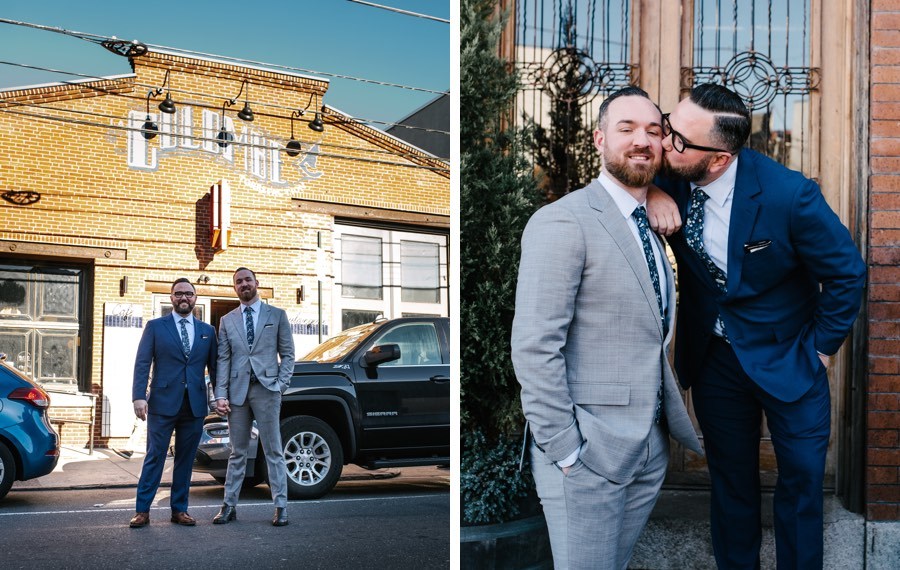 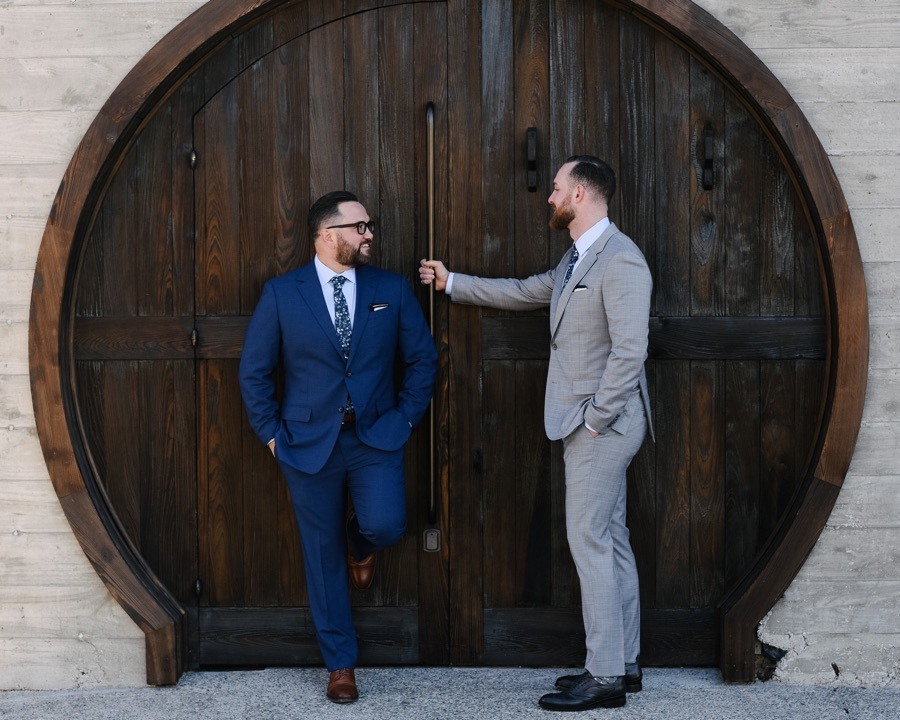 It’s almost like Bill Veltre and Matt Liciardello‘s entire relationship revolves around Philly — and food. On the couple’s first date (they linked up via Facebook after noticing how many mutual connections they had), Bill cooked Matt pasta and red sauce — or “macaroni and gravy,” as Bill, a South Philly native, quickly taught Matt, a Jersey guy, to refer to the delicacy. 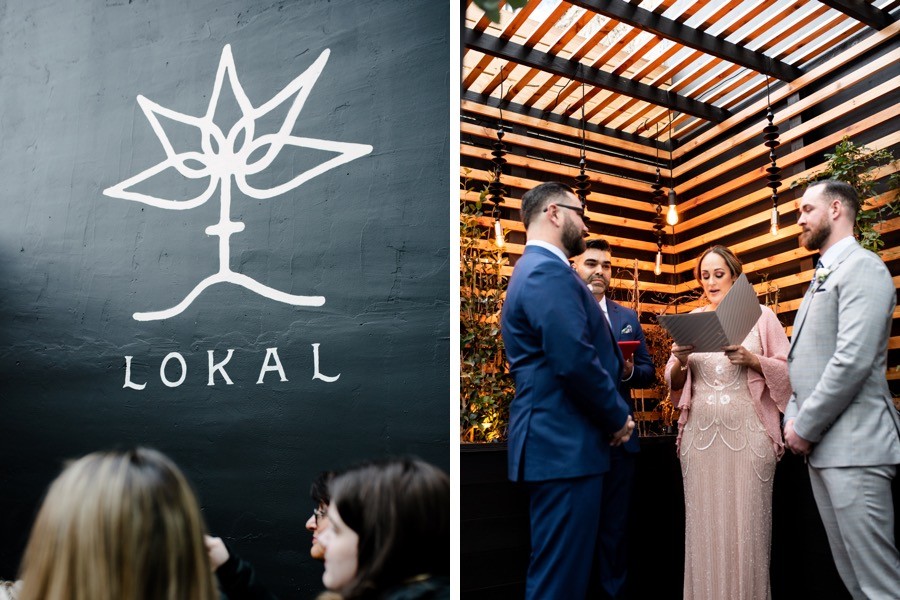 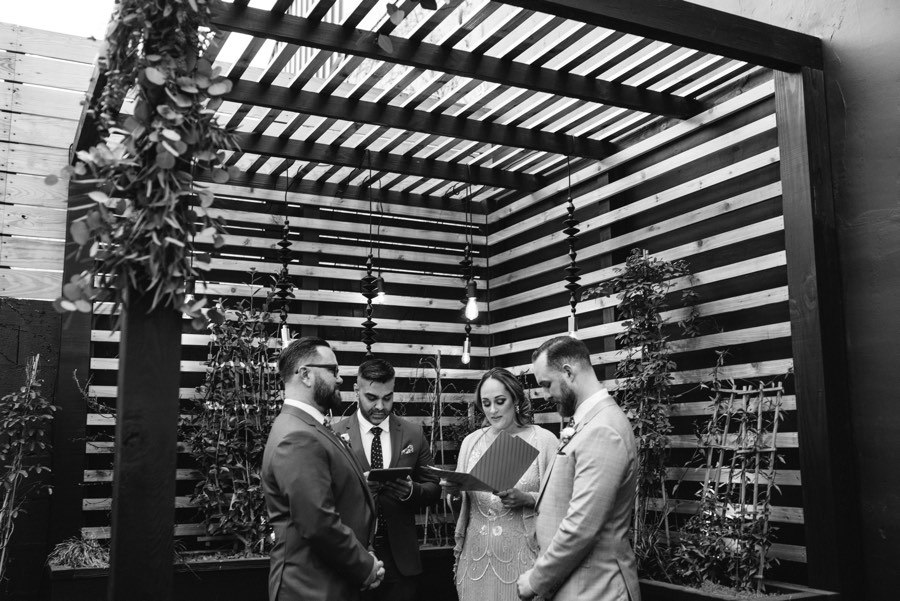 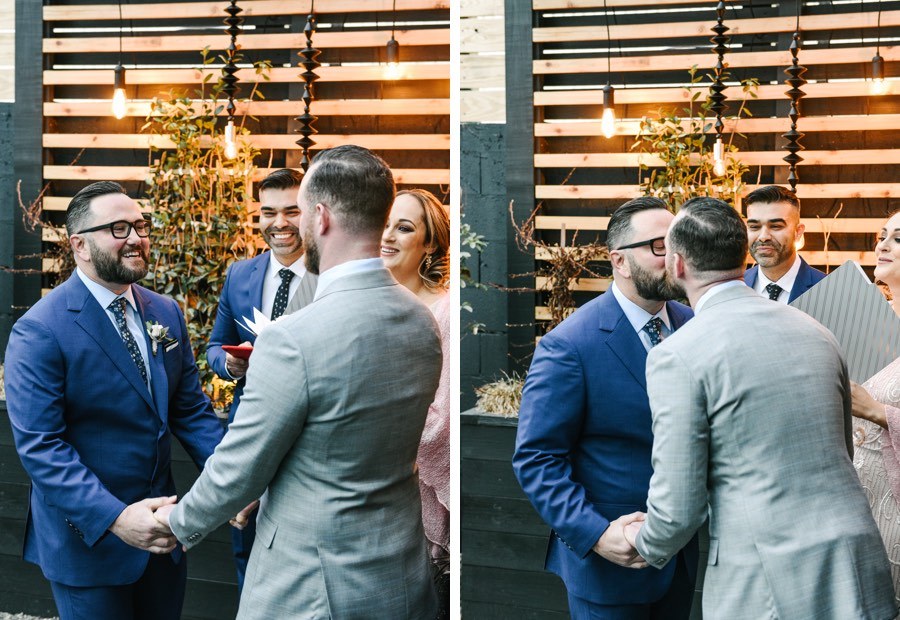 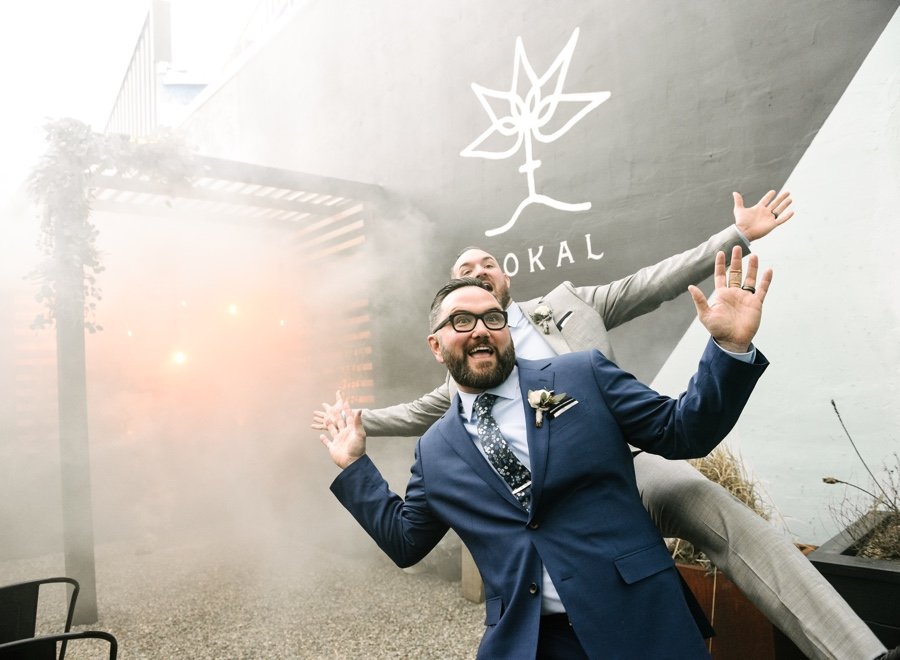 When they moved in together three years later, the couple settled on Kensington. “Once we saw the flagship La Colombe, it drew us to the area even more,” Matt says. The coffee shop became their go-to spot for iced red-eyes and breakfast treats — and then, after they found the perfect David Yurman rings and got engaged during a joint family cruise in the Bahamas, their first choice for a wedding venue. 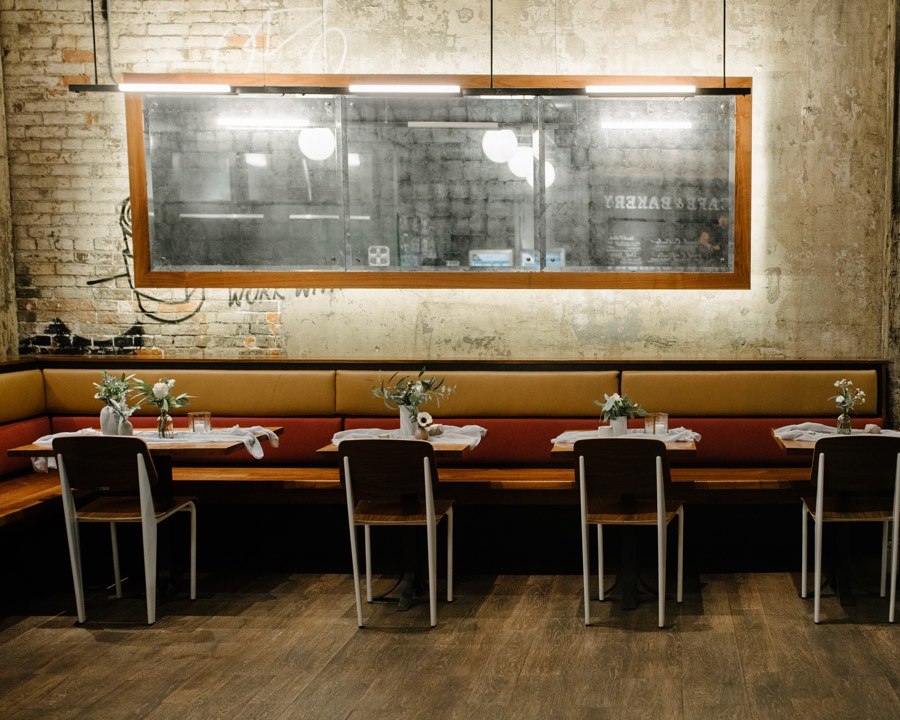 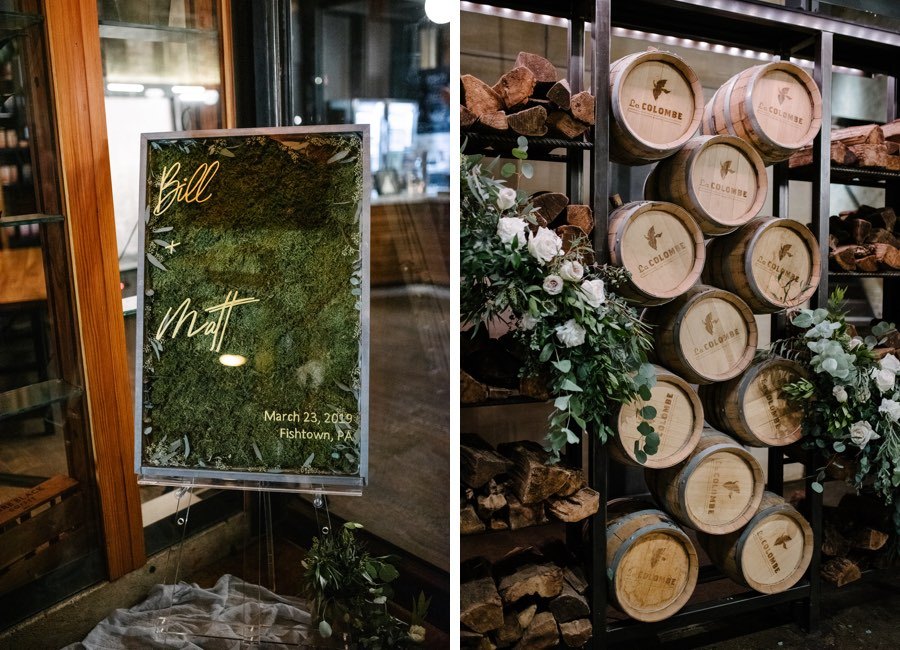 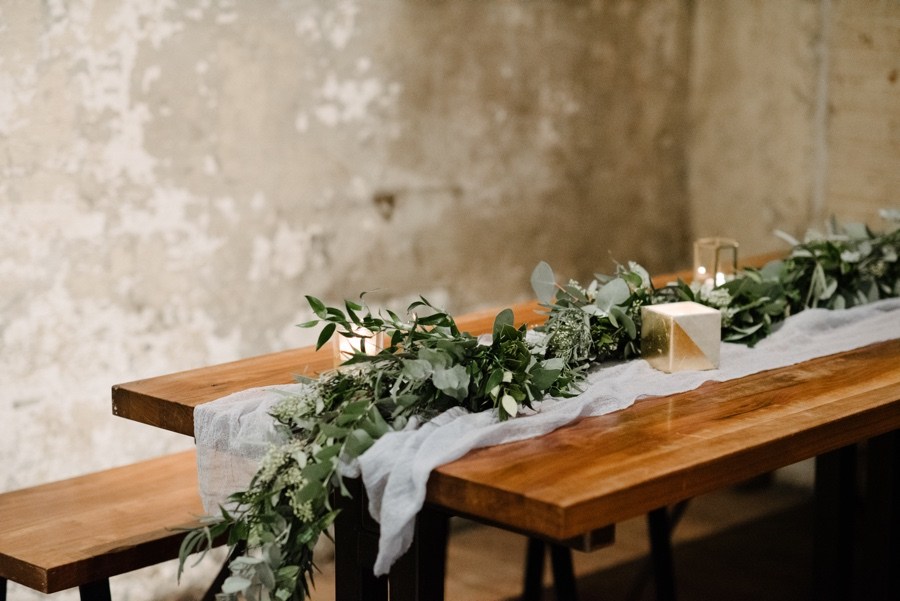 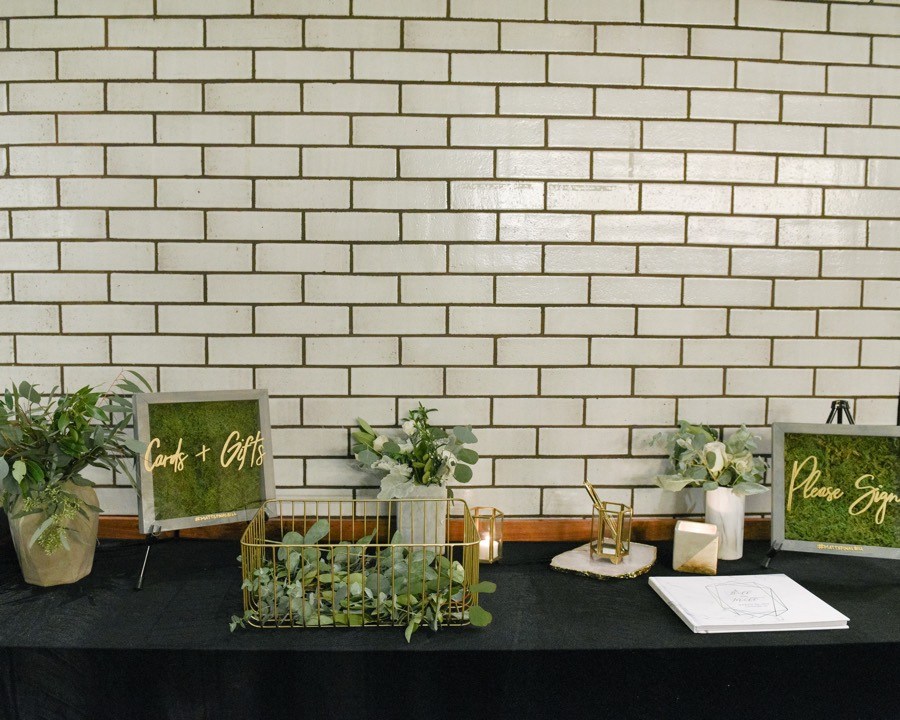 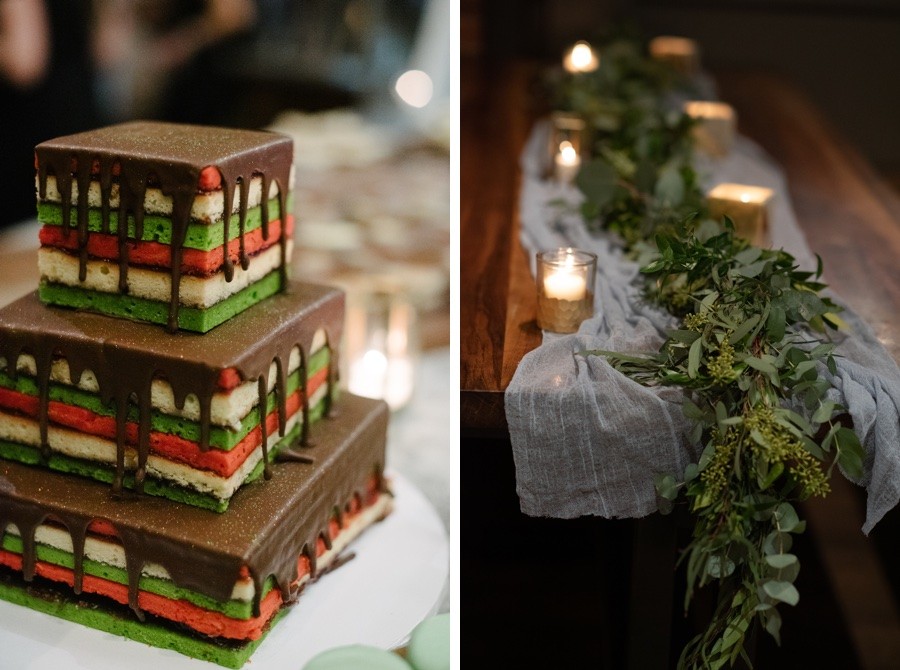 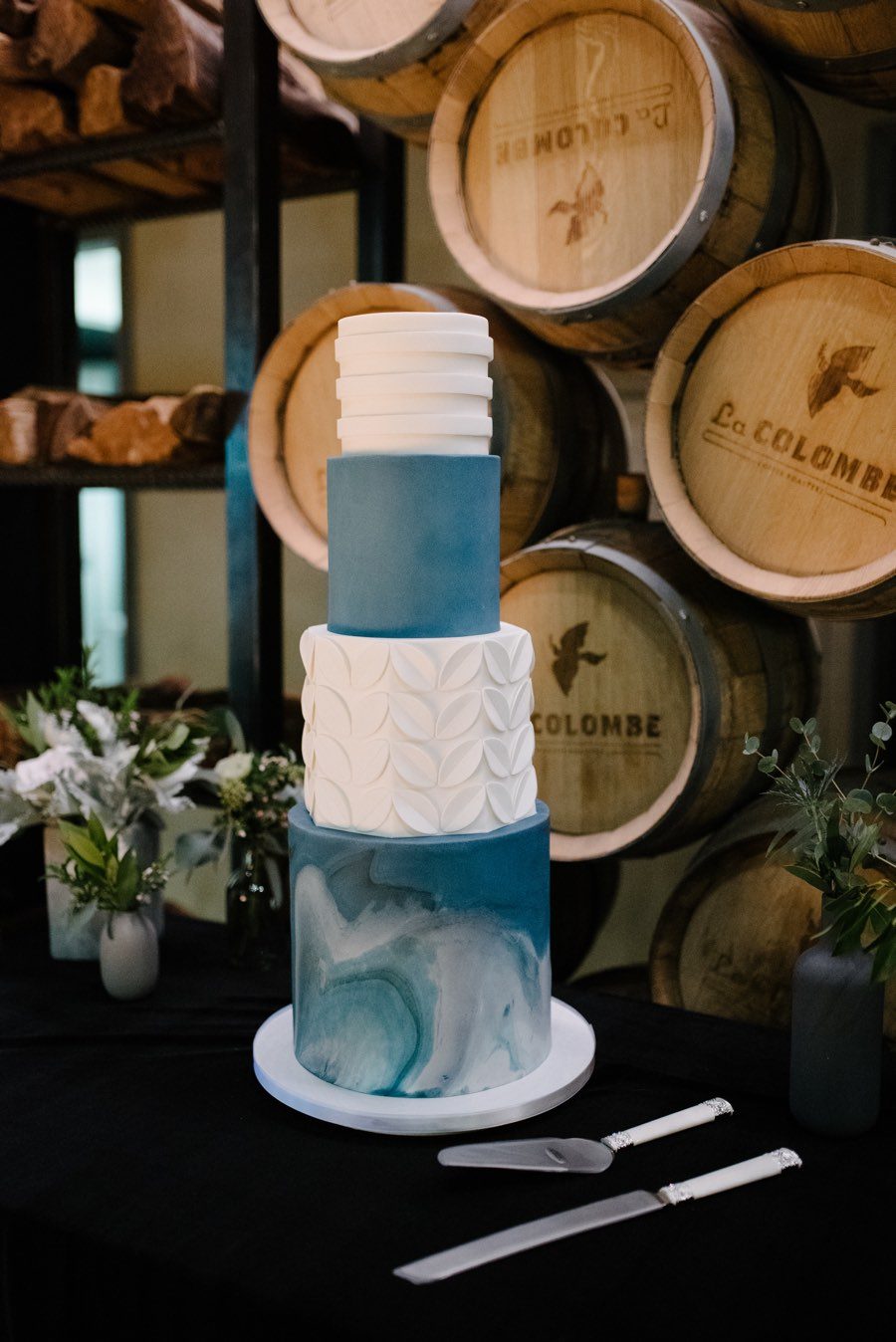 When the Big Day came, the couple, wearing Bonobos suits with matching floral ties, exchanged vows in an intimate ceremony in the Lokal Fishtown courtyard, then headed for La Colombe, which they’d outfitted in a hushed blue and gray palette and refined greenery. Tabletops were adorned with delicate blue cheesecloth and garlands of eucalyptus, sweat peas and lisianthus.

“We didn’t want a lot of florals because we didn’t want to overdress the space,” says Bill. “La Colombe already has such a cool vibe to it.” The pair also mirrored La Colombe’s marble countertops with coordinating vases.

The 115 attendees dined cocktail-style on the couple’s favorite dishes from the coffee shop (chicken salad on brioche, grilled cheese on toasted challah) as well as Philly classics like Love Stout pretzel bites from Yards Brewing Co. Each tier of their blue-and-white cutting cake featured a different flavor, and a six-layer rainbow cookie cake from Zola Bakes was also served. (The treat is Bill’s favorite, and Matt drove all the way to Long Island to pick it up.) 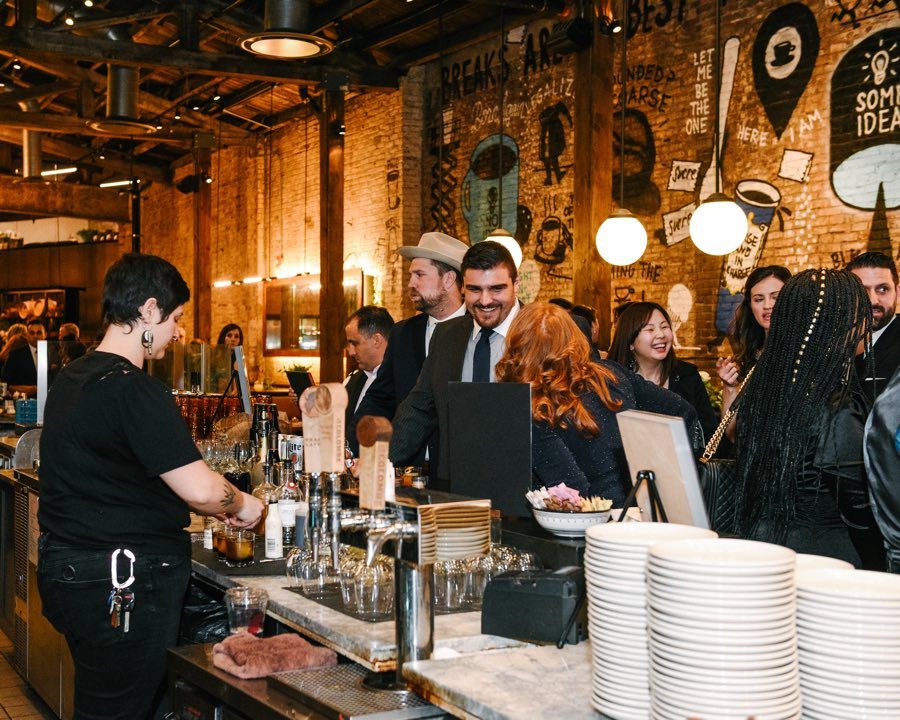 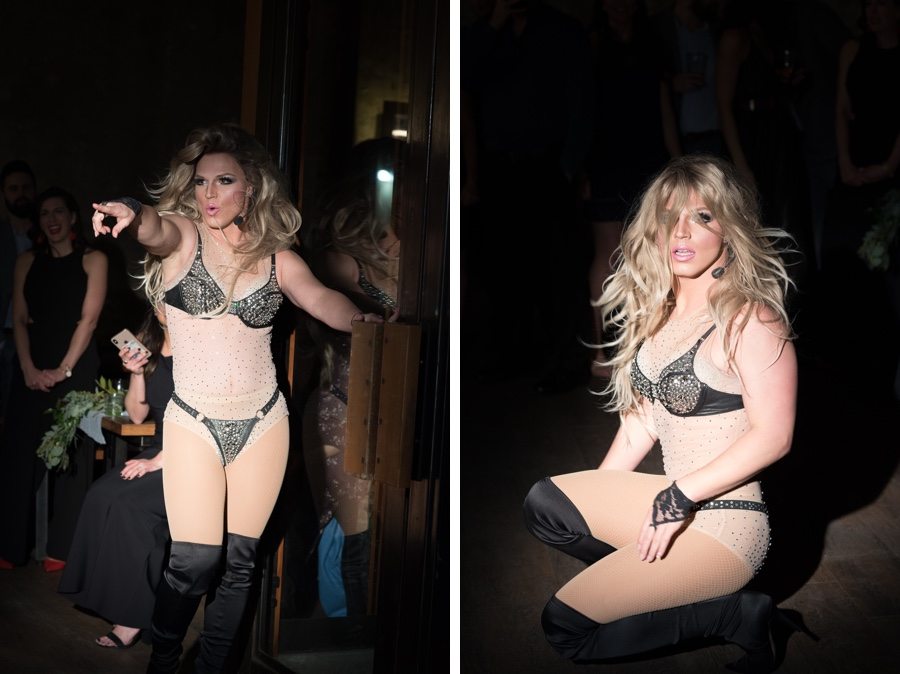 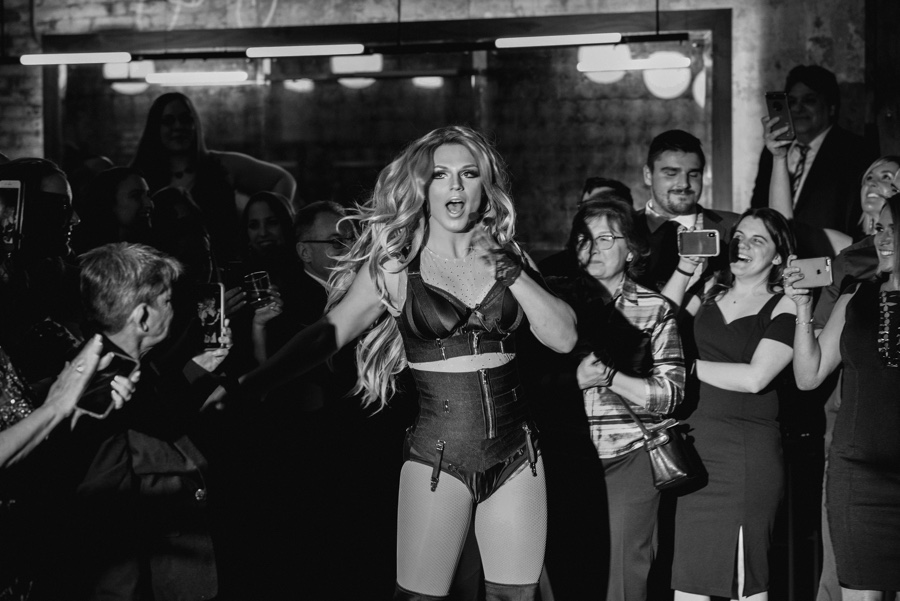 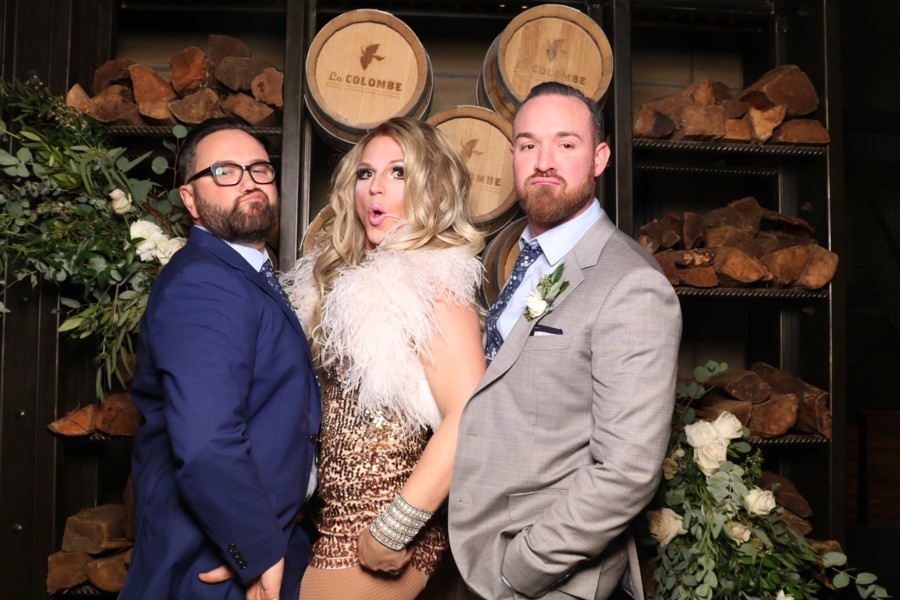 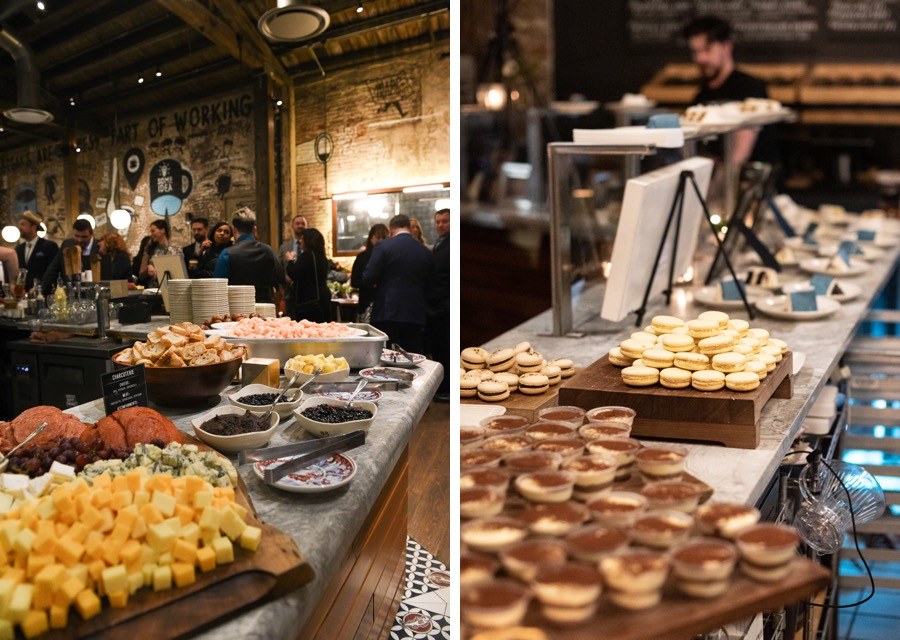 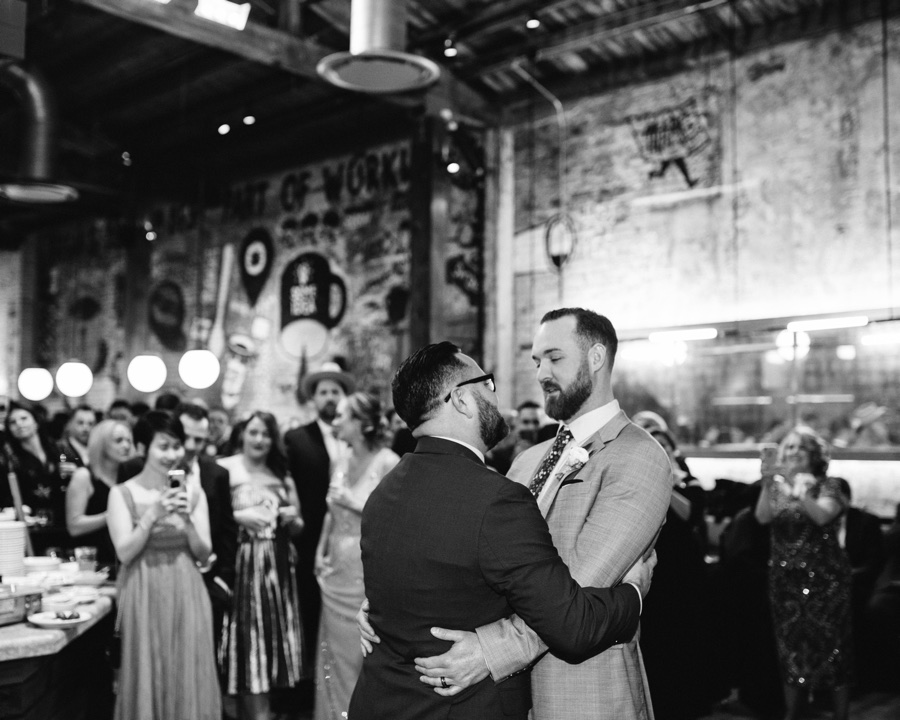 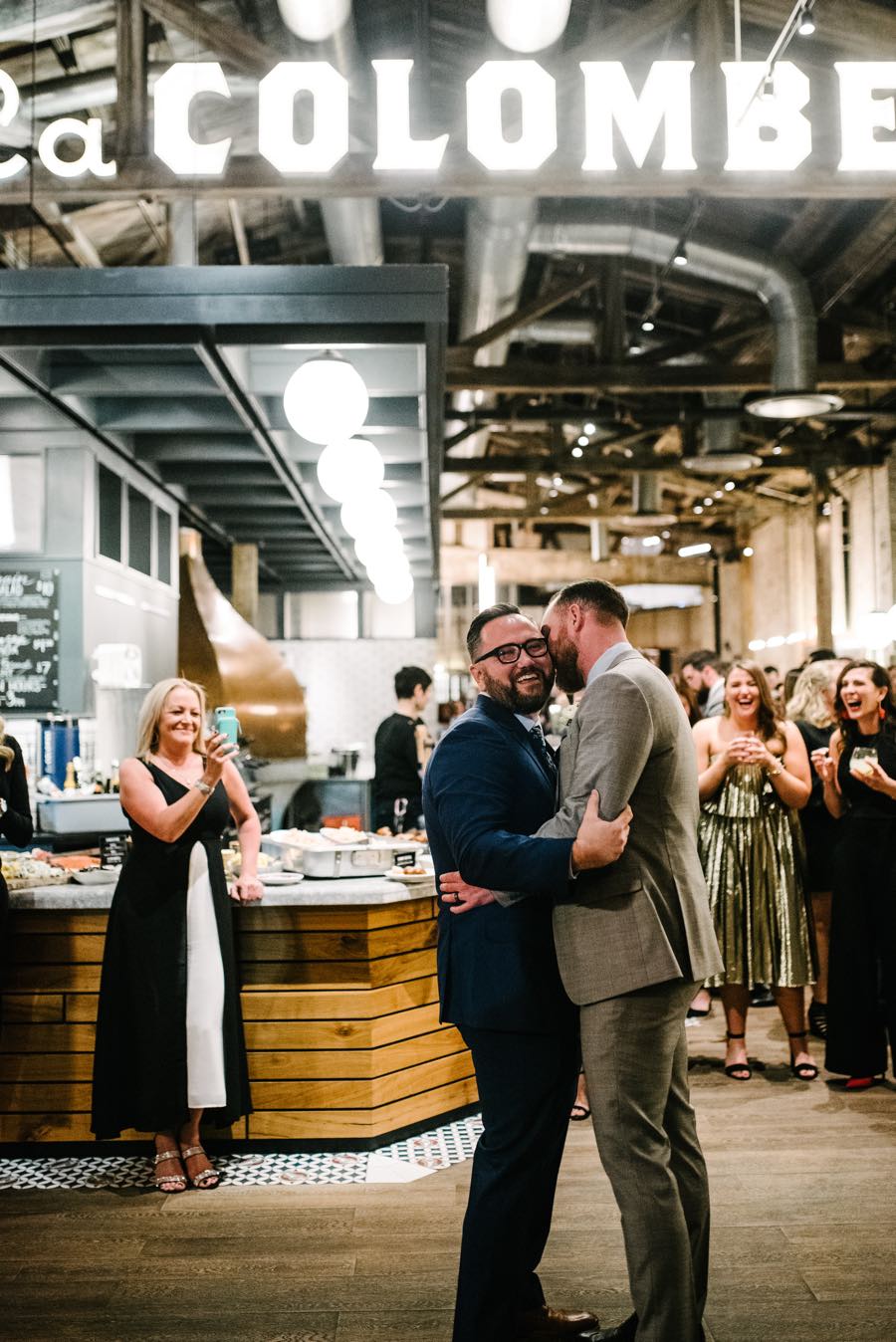 Bill and Matt selected “Latch” by Disclosure (featuring Sam Smith) for their first dance, which took place in La Colombe’s entryway. The highlight of the night, though, was a performance by the couple’s favorite Britney Spears impersonator, Derrick Barry, which Bill arranged as a secret gift for his husband. Bill flew Barry, who has appeared on America’s Got Talent and RuPaul’s Drag Race, in from Vegas for the event. Barry changed outfits three times during the evening and opened up with the couple’s favorite song: “Work, Bitch.”

“It was a total surprise,” Matt says. “And Derrick had such a good time that he stayed until the end of the wedding.”