“In truth, we were both married to men. I questioned for a very long time whether or not I was gay.” 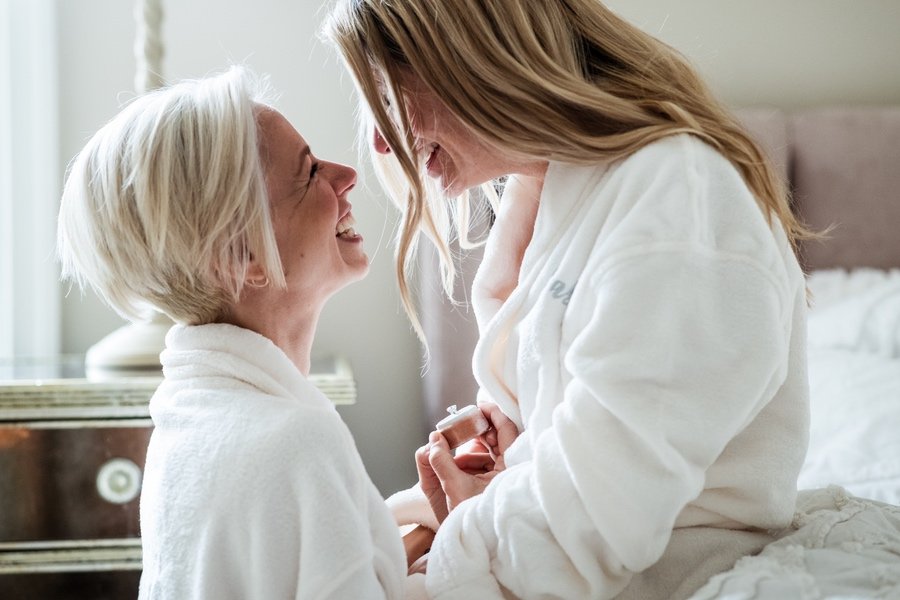 Everyone takes different paths to finding their person. Some meet on Tinder. Some connect through Instagram. And others build their bonds during deeply personal journeys of self-discovery. The Monday after Philly’s largest-ever Pride parade, it feels particularly special to share the proposal story of Rachel Rubin and Tink Fisher, two prominent players in Philly’s health and wellness scene. Their at-home marriage proposal happened during a low-key photo session at their Fort Washington residence with photographer Linette Kielinski.

How They Got Together (as told by Rachel): This is a complex story. In truth, we were both married to men and experienced inner awareness of unfulfillment. For years I knew of my deep attraction to women. I questioned for a very long time whether or not I was gay and if I needed to be in a relationship with a woman. And Tink, she had a void inside that all of the box-checking couldn’t fill. We knew each other for a few years prior to being together, and did not even touch on the idea that we could be each other’s person.

Tink set out on her journey of self-discovery and focused on her health. I just so happened to be her first teacher. I gave her books I thought she would benefit from reading, she came to my Kettlebell Kundalini classes, and she signed on to attend a Rise Gatherings retreat. I was deeply attracted to her desire and pursuit of herself and life. We built our connection on admiration for the other, as we saw each other so clearly and desired to support each other fully.

We dated for about 2-and-a-half years before I officially asked her to share her life with me.

The Proposal Story (also told by Rachel): Months before the day, I asked photographer Linette Kielinski to come and do an intimate photo shoot with us in our space. (It was Tink’s idea!) At around the same time, I had seen one of Angela Monaco’s beautiful engagement rings and immediately felt the desire to work with her to create a special piece for Tink. Angela and I spent months designing a beautiful moonstone and diamond ring with a wave-like detail because Tink loves the ocean. I also thought: Perfect! I’ll propose as a surprise during the photo shoot so that we have it captured!

On the day of, I was so nervous! I hadn’t fully rehearsed how it would go, because I’m a go-with-the-flow kind of person. Linette arrived and we excitedly bared ourselves and held each other through the beginning of the shoot. It was playful and we giggled throughout. I gave Tink custom robes I had ordered that said “Babe” and “Baby.” She cried! She’s so sweet and never expects anything.

At that moment, I laughed inside knowing what was really coming. Linette cued me that it was time. I sat on the edge of the bed and Tink was standing in front of me. I remember our faces being about an inch from the other. I softly told her that I feel so blessed to have her by my side, and that I want to be the person to support her through life. I spoke sentiments of my commitment to her and our children and to creating a life we love and that we can make it whatever we wish. She responded with “I know, baby” and “Me too” many times, as if it was just another casual intimate moment together. (We express our love often, and me telling Tink I want to spend my life with her isn’t something we haven’t said to each other before.)

As I continued, I could see her entire face change when I said to her, “So I have something I want to give you.” The ring had been hidden in my bedroom for weeks! (My daughter was the first person to see the ring, and she kept it to herself for months, yet somehow Tink, who cleans and organizes daily as enjoyment, never found it.)

At this point, I walked back over to Tink with the ring box and asked, Should I get on one knee?

I did, and I then asked her if she would share all of life with me. With tears streaming down her face, Tink said, Yes! Oh my god, YES!

Later that afternoon, I set up a celebration with our closest friends and family. Our kids were there, along with many others who have supported the development of our love. It was so nice to be surrounded by our people at such a special time.

For more only-in-Philadelphia proposal stories, go here. Want to see your own proposal story featured on this blog? Guidelines for submissions can be found here.