"I had no idea the portrait was going to wind up in the chambers of the justice," says Natalie Hope McDonald. "I'm so honored." 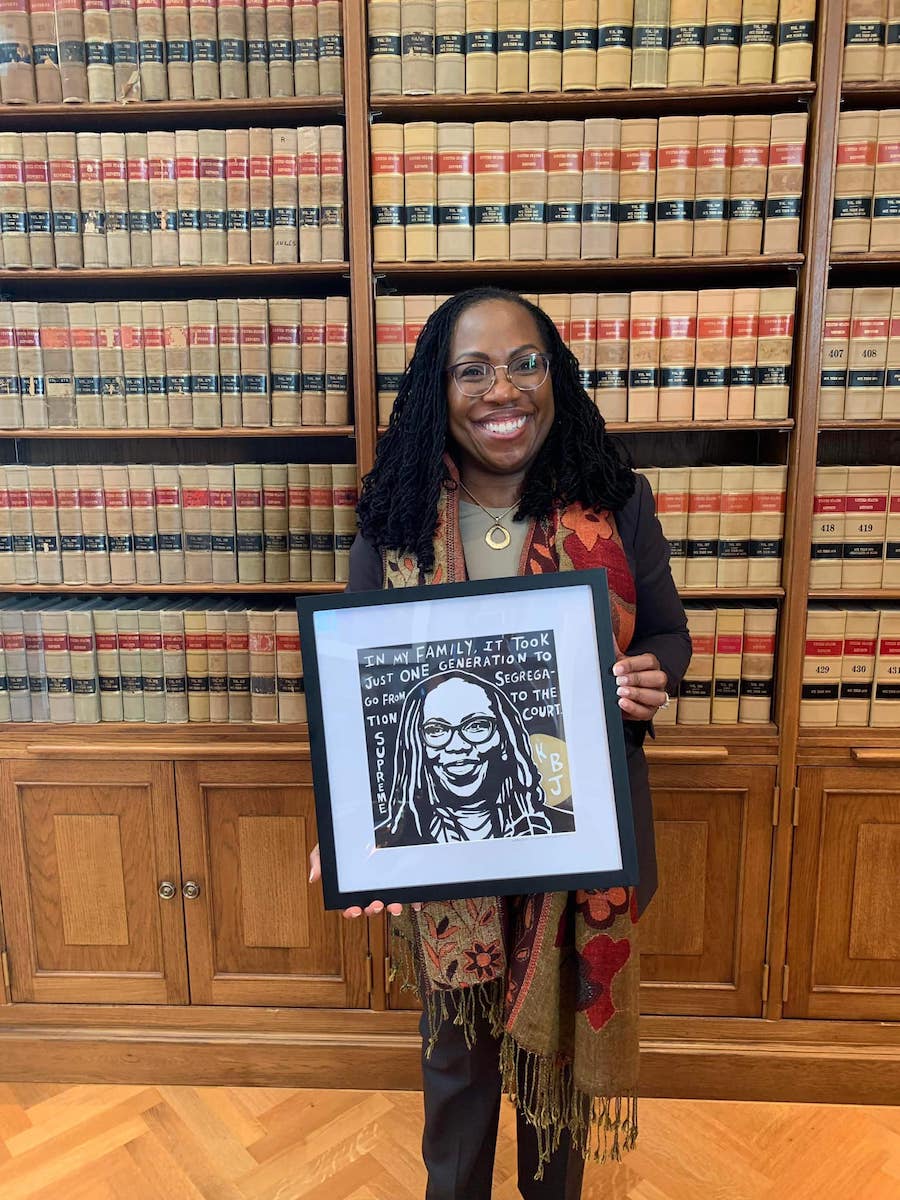 Philadelphia artist Natalie Hope McDonald creates many, many illustrations by hand. Never with a computer.

So it wasn’t all that odd when somebody reached out to McDonald for a commissioned portrait of United States Supreme Court Justice Ketanji Brown Jackson. After all, Jackson is the first Black woman to become Supreme Court justice.

The buyer, North Jersey attorney Nina Simmons, was familiar with McDonald’s work through a relative who owned some McDonald pieces. Simmons went to college and law school with Jackson. And McDonald thought Simmons just wanted a cool piece of artwork depicting her history-making friend.

But it turns out Simmons had other ideas: She gifted the portrait to Jackson, who has found a place for it in her chambers in Washington D.C.

Simmons recently hand-delivered the portrait to Jackson in her chambers, and she says Jackson was floored.

“She was just like, ‘Wow,'” Simmons recalls. “She gets a lot of stuff from a lot of people, but I think this was different, very special to her.”

“I had no idea the portrait was going to wind up in the chambers of the justice,” says McDonald. “I’m so honored. It’s such a huge compliment.”

McDonald made the portrait using, of all things, a Sharpie — and some gold paint.

“But I can promise you, these were some very fancy Sharpies,” she jokes.

For the quote on the portrait, McDonald chose these striking words Jackson spoke outside the White House, as she stood between President Joe Biden and Vice President Kamala Harris, on the occasion of her confirmation: “In my family, it took just one generation to go from segregation to the Supreme Court.”

Here’s a photo of the portrait in progress: 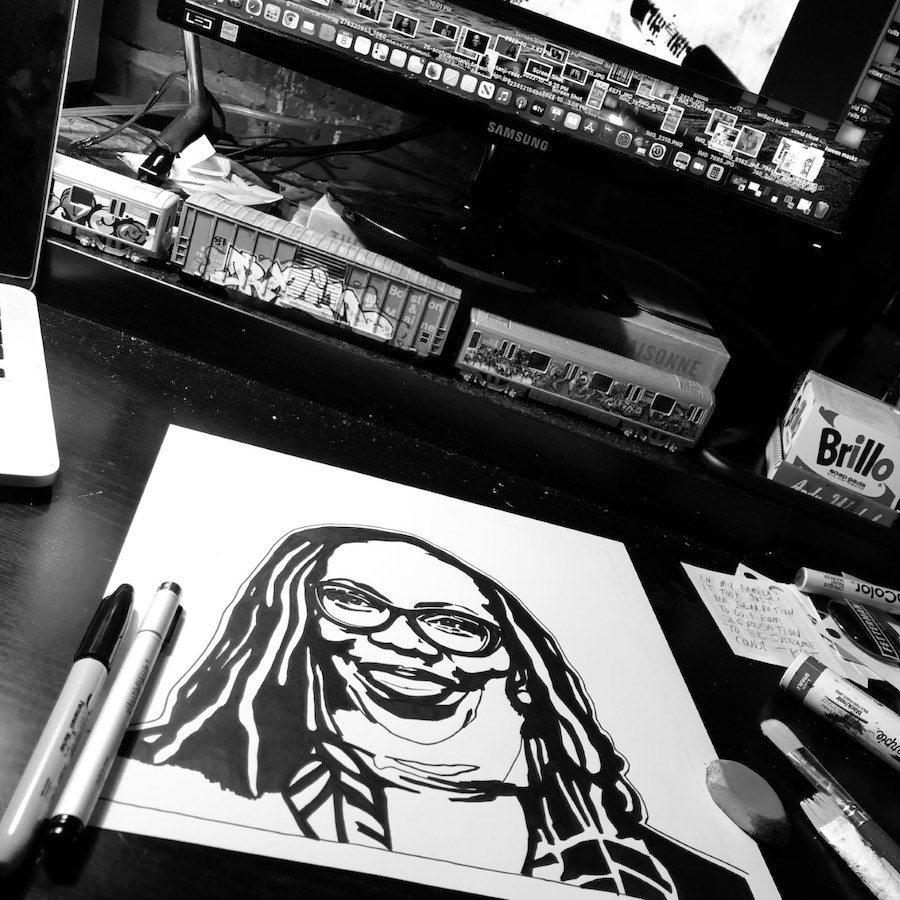 And here’s a better look at the finished portrait: 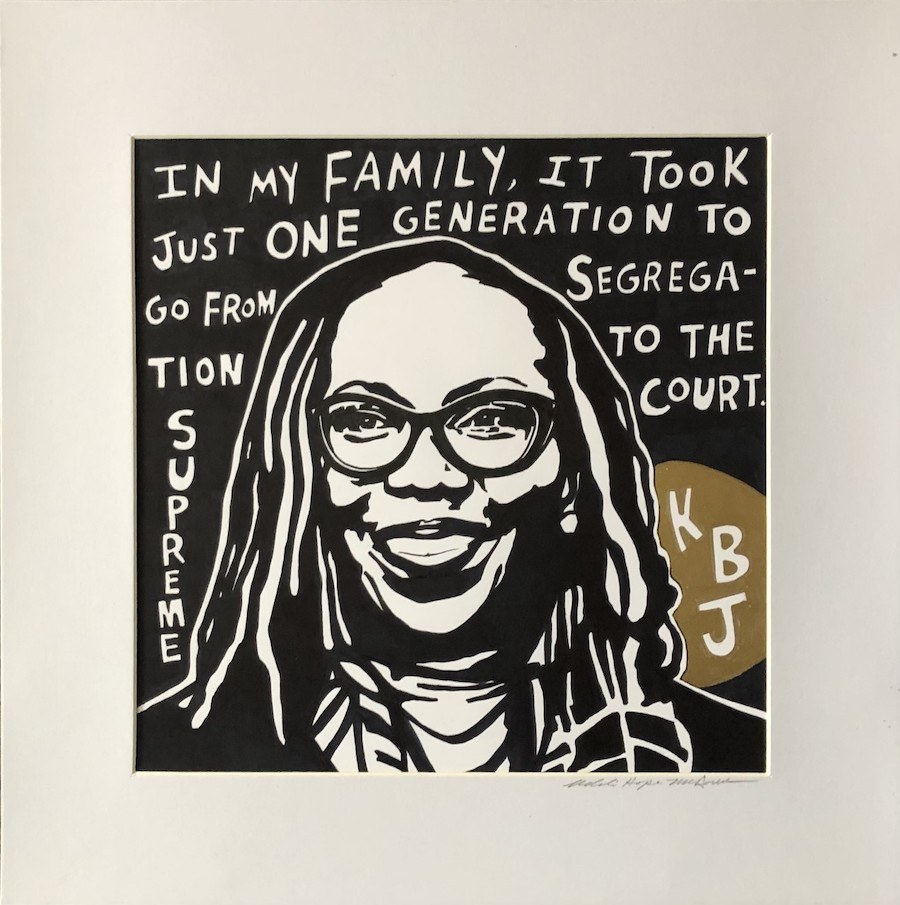 McDonald just opened a new three-person show at Chestnut Street’s James Oliver Gallery on Saturday night. Some portraits are included. But not the one of Jackson.

“That person bought the original,” she explains. “It’s a one of a kind. There will never be another.”

McDonald declined to disclose the price paid for the portrait, or what she charges in general for similar work, suggesting any interested parties can reach out to her directly through her website.

I asked her if, hypothetically speaking, Ginni Thomas emailed her to request a portrait of her husband, United States Supreme Court Justice Clarence Thomas, whether she’d be as excited — or if she’d even accept the commission.

“I really don’t think that is going to happen,” McDonald replied, with a chuckle. “Something tells me they would not appreciate my artwork quite as much.”