Philly Today: They’re Even Celebrating the Phillies in San Diego 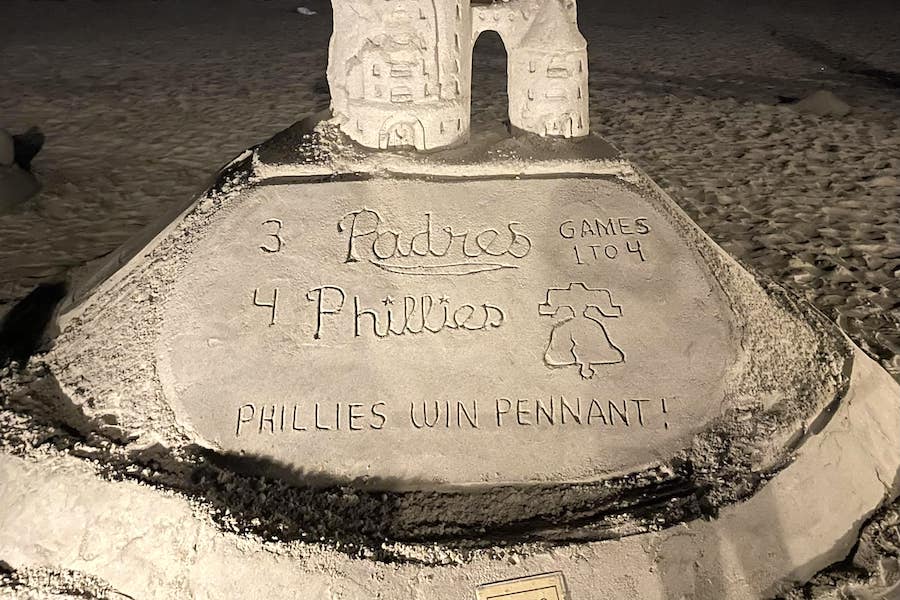 I typically leave all the sports talk to my colleague Sandy Hingston, who closes out each edition of Philly Today with her observations on the world of Philly sports, as she does today.

San Diego is a completely different story. After the Phillies did what they had to do to the Padres to get into the World Series, there was quite a bit of celebration in San Diego. According to some friends out that way, somebody even made sand art commemorating the occasion. It must really suck to live in a place where such things are allowed without incident. But at least they have In-N-Out. 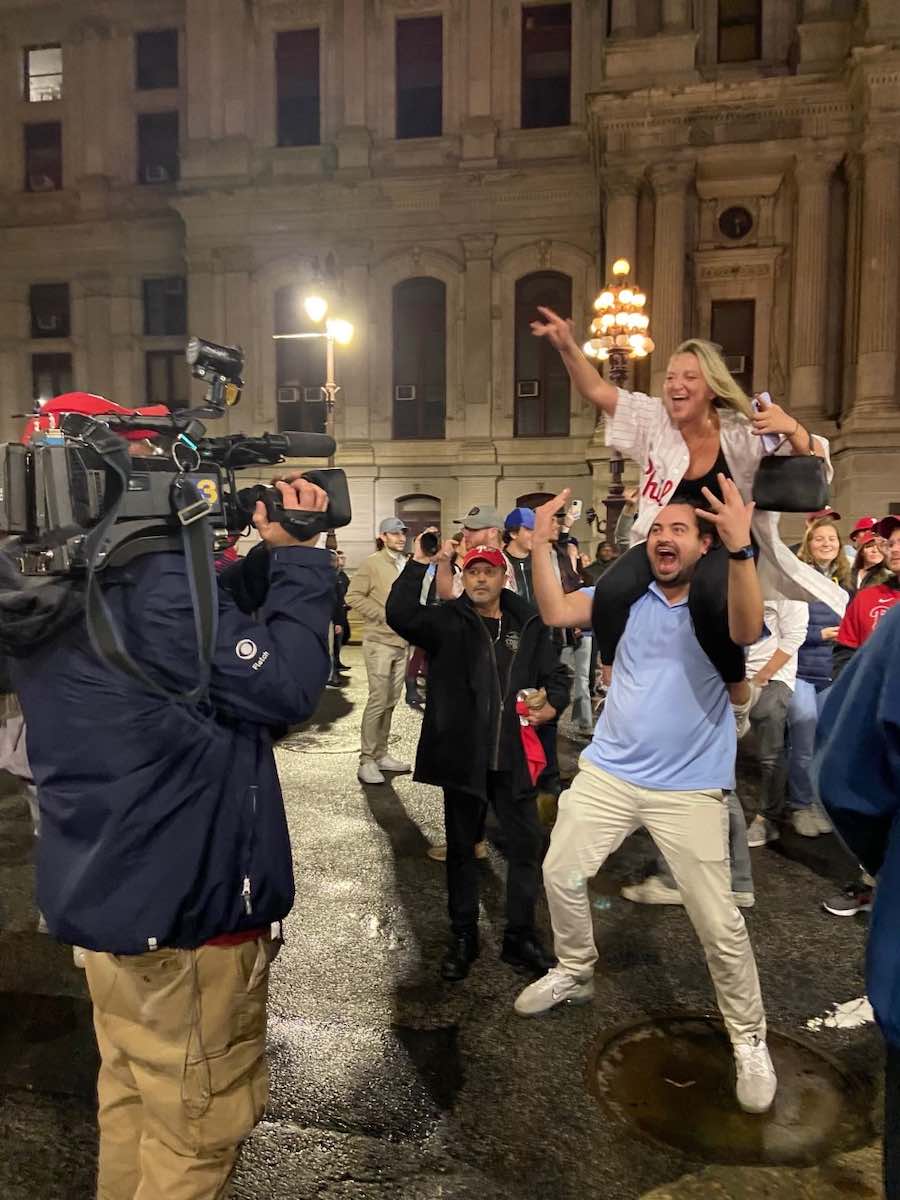 Scroll down for Sandy’s thoughts.

Couldn’t miss this headline from Rolling Stone: “Trump Plans to Challenge the 2022 Elections — Starting in Philly.” Because of course. There goes the vacation I had planned for November.

In case you’ve forgotten what happened the last time he did this, check out my in-depth 2021 interview with then-City Commissioner Al Schmidt, aka the Republican who was in charge of elections in Philly. He’s now the head of the Committee of Seventy, the local nonprofit/nonpartisan group that is, in their words, “focused on strengthening democracy and combating political corruption.” Good luck with that!

About That Pennsylvania Unemployment Rate…

The Inquirer drops its restaurant rating system (aka one bell = sucks, four bells = fantastique) for good.

A warning to those of you foraging for mushrooms, which is apparently a very popular thing to do this time of year in the Philadelphia area.

I Love a Good Oral History

Oral histories are some of my favorite things to read — and to compile myself. In the past, I’ve put together oral histories on everything from the MOVE Bombing to Live Aid to Gary Heidnik to, yes, the cheesesteak. So hat’s off to Pat Rapa for this fascinating oral history in our November issue: “When the Ocean Met the Bay: 10 Years Later, an Oral History of Superstorm Sandy.” (Yes, that was a decade ago this week!)

The End Is Nigh!

I’m sure you’re registered to vote, but if you’re not:

a) feel free to email me and tell me why; I’d love to know
b) register today, because tomorrow is too late

But If You Are Registered to Vote…

You can vote right now!

Hey, we don’t get too many celebrities in Philadelphia (well, except when the Eagles are playing), so we always take note when Hollywood visits our doorstep. 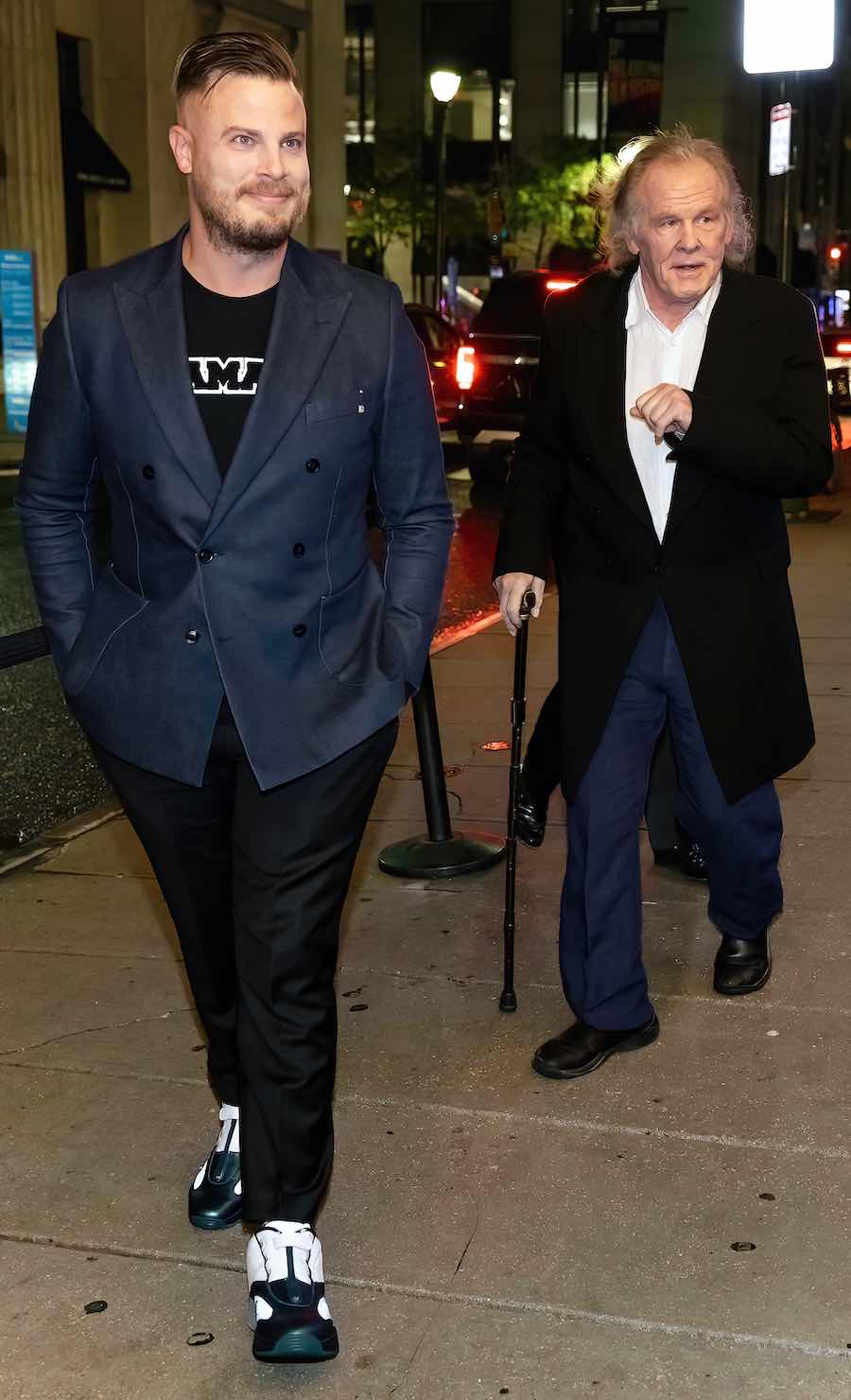 While the rest of the city was going nuts over the Phillies on Sunday, Nick Nolte showed up at the Philadelphia Film Center (formerly the Prince) on Chestnut Street for a screening of Rittenhouse Square.

Here’s the description of Rittenhouse Square from the Philadelphia Film Festival website: “Finding himself on the street, a teen strikes up a friendship with a homeless veteran who encourages him to make the most of his musical talent in this touching, Philly-set drama.”

Alas, that was the one and only screening. So you’ll have to wait to see it. I imagine a streaming service will pick it up soon.

And from the So-How-Was-YOUR-Weekend? Sports Desk …

Weekend recap! Let’s start with Friday night’s Phillies game. How nice to only have one goddamn game to watch at a time. The Phanatic started things off by harassing Ken Rosenthal:

In the fourth, after a flurry of singles, a bloop hit by Segura made it 3-1 Phillies. In the top of the sixth, Phils starter Ranger Suarez was pulled to general befuddlement, as he’d only thrown 68 pitches. “Must be something going on with him,” Larry Anderson mused on the radio.

Jose Alvarado pitched the eighth and ninth — only the second time all season he’d gone two innings. The last batter up was … Austin Nola, Aaron’s big brother. Alvarado struck him out. Phils won it, 4-2, and were up two games to one!

Temple football blew an early lead before everything fell apart for frosh QB E.J. Warner and his receivers. The Golden Hurricane triumphed, 27-16.

But on to Saturday:

They are greasing the poles in Philly! Go Phillies! #RedOctober #phillies #philliesnation pic.twitter.com/9YFEYrQAIz

The Sixers started the night with a six o’clock tip-off. Kate Scott acknowledged that the Phils were playing later and that she was only entertaining us in the meantime. Both the Sixers and their opponents, the Spurs, got off to a slow start. The Spurs were up 54-51 at halftime. The game marked the debut of Chick-fil-A’s “Bricken for Chicken” promo. Gina Mizell, how would you grade that first half?

Halftime: Spurs 54, Sixers 51. An uninspiring first half for the Sixers against a team that is supposed to be among the NBA's worst. They're shooting 37.2 percent from the floor. Maxey 14 points. Embiid 13 and 7. Harden is 2-of-10 from the floor but has 6 rebounds and 6 assists.

The Sixers trailed for most of the third quarter but pulled to within two points with 4:42 to go. Uh-oh! The Phils game was beginning! Time to change the channel.

Bailey Falter was pitching for us, and he’s got ringlets just like my favorite doll when I was a kid.

Mike Clevinger was pitching for the Padres. It’s honestly amazing how much bad hair there is in baseball these days:

Kyle Schwarber singled in the lead-off spot, and Hoskins homered to make it 4-2. The crowd went WILD!!! Meanwhile, over at the Wells Fargo Center, the Sixers were about to lose three straight. “That is discouraging,” Alaa Abdelnaby told Kate Scott. Damn, and Embiid had 40 points. Doc Rivers is gonna lose his job.

Back to the Phils! Bryce doubled, and Realmuto scored to bring it to 4-3. “This is the shortest outing I can remember for any two starters,” the Fox announcer decreed.

In the fifth, with Brad Hand pitching, Juan Soto smacked a homer to make it 6-4 Padres. But! In the bottom of the fifth, Rhys Hoskins hit a SECOND 2-run homer!

Schwarber hit a monster home run to make it 9-6, and in the bottom of the seventh, Realmuto hit a solo homer. Final score: 10-6. I’m starting to believe.

Here's how you win a bullpen game after your starter allows four runs in first inning:

In case you were wondering about the 6-0 Eagles, they had a bye, remember? You know who’s also 6-0? Penn football:

With four games left to play this season, @PENNfb remains undefeated at 6-0: https://t.co/SYp9BPy3z4

On Sunday, I had to go to my daughter’s house to plant 8,000 spring bulbs in her garden so my grandkids will grow up to appreciate nature. Marcy’s family doesn’t do baseball, so I was back in my car and headed home with the game still in the first inning. I’ll have you know I turned down homemade doughnuts for this. I was merging onto 422 when Rhys Hoskins hit a two-run homer in the bottom of the third.

I was parking in front of my house when the Padres answered with a singleton homer by Juan Soto in the top of the fourth. Zack Wheeler was pitching for the Phils, and Yu Darvish for the Padres. It was raining off and on, and in the stands, nerves seemed high. Wheeler had already hit one batter, and Darvish had whacked two. Don’t worry, though; Schwarber made it all better:

Alec Bohm now has the strongest elbow in the league. pic.twitter.com/xYXi4mmnSn

God was on our side:

So was John Fetterman:

I guess San Diego is “south of Philadelphia” pic.twitter.com/l0M3kK8Ymb

So was Alec Bohm:

Rob Thomson pulled Wheeler for Seranthony Dominguez in the seventh, and thus began the Feast of the Wild Pitches:

Seranthony Domínguez threw three wild pitches all season. He threw three in a span of 19 pitches in the top of the seventh inning.

In the bottom of the eighth, Realmuto singled to left. Bryce Harper fouled off 5,000 pitches and …

I almost crashed my car

There’s not enough grease for the poles

Dave Robertson came in to face pinch hitter Wil Myers and struck him out. Screw the rain; no one in the stadium was going anywhere. Robertson walked Drury — and then walked Kim. Thomson brought in Ranger Suarez to face Trent Grisham, who didn’t have a hit so far in the series. He bunted, but Suarez grabbed it and got him at first. Two outs. Austin Nola was up. OF COURSE Austin Nola was up. This series was downright Chekovian. He hit a pop-up, Philadelphians everywhere held their breath, and … that’s it! Phils win it! Their first National League pennant since 2009!

Living in Philadelphia means learning to think “oh, it sounds like the apocalypse outside, so something good must have happened in sports.”

PLEASE KEEP TALKING SHIT ABOUT US

The Sixers face the Pacers tonight, at home. And the Phils don’t have to play the Padres! High hopes! Ring that bell! Oh, and Fetterman gets the last word: