Bradley Cooper! Quinta Brunson! Plus more of what the city is (or should be) talking about. 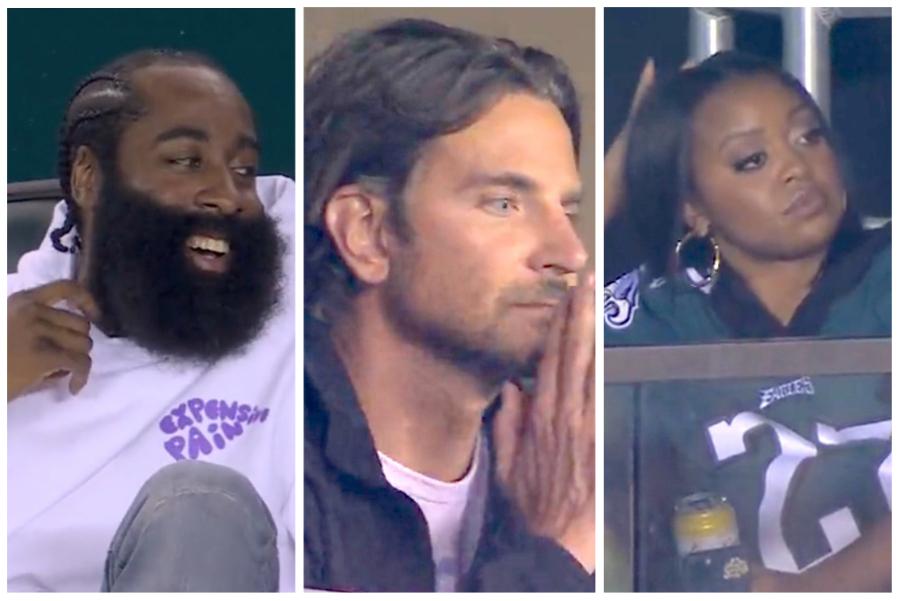 James Harden, Bradley Cooper and Quinta Brunson were among the celebrities spotted at the Philadelphia Eagles win against the Minnesota Vikings at Lincoln Financial Field in Philadelphia on Monday Night Football (images via NFL on Twitter)

If you watched the Philadelphia Eagles trounce the Minnesota Vikings on Monday Night Football, you were in good company.

Among the celebrities spotted at the Eagles game: dreamy-eyed son-of-Jenkintown Bradley Cooper; comic genius Quinta Brunson, who just picked up the Emmy for her writing on Abbott Elementary, which returns on Wednesday night; well-bearded Sixers star James Harden; Roots legend Questlove; and Phillies players Bryce Harper and Rhys Hoskins, who hopefully didn’t party too hard, considering they’ll be taking the field at Citizens Bank Park less than 24 hours after the Eagles game started.

More on the wide world of Philadelphia sports from Sandy Hingston, down below.

Once the Eagles game ended, we were bored, so we naturally headed over to Twitter to see what topics were trending, because that’s what reporters do when they’re bored. And lo and behold, Kensington was trending.

Now, it turns out this wasn’t just a product of our Kensington. It was likely due to the combined forces of that beleaguered Philly neighborhood and Kensington Palace, because dead queen and all.

As for Kensington in Philadelphia, folks were paying attention to the forgotten area of the city because charlatan-quack candidate Dr. Oz staged a pretty ridiculous photo op there.

Dr. Oz picked a needle up off the ground — without a glove on, we might add. He threw some people — who were either actual folks affected by the opioid epidemic or paid actors, depending on whom you believe — into his pickup truck, purportedly to get them help. Dr. Oz told somebody (presumably a reporter) who asked him about the problems in Kensington that she should drop her cigarette. The whole thing was a sad display, though we do kinda have to agree with the Dr. Oz supporters who point out that checked-out Mayor Jim Kenney hasn’t been spending much time in Kensington. Sad when Kenney slips a rung below Dr. Oz.

Oh, and can somebody please tell Dasha Burns of NBC News (well, and Dr. Oz, since he retweeted her) that Kensington is a neighborhood in Philadelphia and not a city in Pennsylvania?

#PASEN Oz spent time in Kensington, PA today for a “Safer Streets” initiative. The event was initially focused on crime and violence, but became more about addiction as he ran into individuals needing treatment and took a group to a detox center.

Philadelphia District Attorney Larry Krasner is in full-blown crisis mode. Many blame him for Philly’s ridiculous crime problem, which he infamously and regrettably downplayed not long ago. Many Republican legislators in Harrisburg want to kick him to the curb, and some Democrats agree with them.

On Monday, Krasner held a lengthy news conference, backed up by local Black religious and political leaders, to plead his case. Here’s what he had to say about the group of pols who want to impeach him: “Appropriately and politely and within our constitutional rights as long as we have them, it may be time for voters to take it to the streets and make sure that their voices are heard, no matter how many additional ambushed and cooked-up approaches there are to this thing.”

Is it just me, or does Krasner sound pretty worried?

And (More) from the Sports Desk…

Inside the two-minute mark of the Eagles’ never-a-doubt 24-7 drubbing of the Minnesota Vikings, WIP’s Merrill Reese summed it up best: “It’s nice when at this point in the game, you can just have some fun.”

Having fun has been a rare treat for Eagles fans in the past few seasons — so much angst! — but damn, the team’s show of puissance on Monday Night Football was majorly fun. Whether it was QB Jalen Hurts — who’s had his share of doubters — putting the offense on his back and running with it in the first half, or Darius Slay shutting down much-hyped Vikings receiver Justin Jefferson for the entire game, or the whole secondary finally playing like they knew what they were doing, this one was a joy from start to finish, much to the chagrin of notoriously Philly-averse announcers Joe Buck and Troy Aikman. (“The two worst suck-ass announcers in the business,” my husband declared with disgust as the game kicked off.)

Hurts passed for 333 yards overall, while the Vikings went 3-and-out on their first two possessions. Like we said, fun!

Among the standouts were a number of the team’s erstwhile goats — Dallas Goedert, Avonte Maddox, T.J. Edwards, Miles Sanders, Quez Watkins and Boston Scott all did themselves proud, as did newbie A.J. Brown. (Okay, the offensive line had some interesting ineligible-receiver problems, but clearly, the refs were high in that first half.)

Sweet revenge was hearing Aikman say of the Birds, no doubt through gritted teeth, “Everybody has played at an exceptionally high level.” Next Sunday at one p.m.: the Washington, uh, Commanders, under the command of Carson Wentz. Let’s hope it’s this much fun. —Sandy Hingston