Plus, Wegmans ditches plastic, some Eagles and Phils news, and more of what the city is (or should be) talking about. 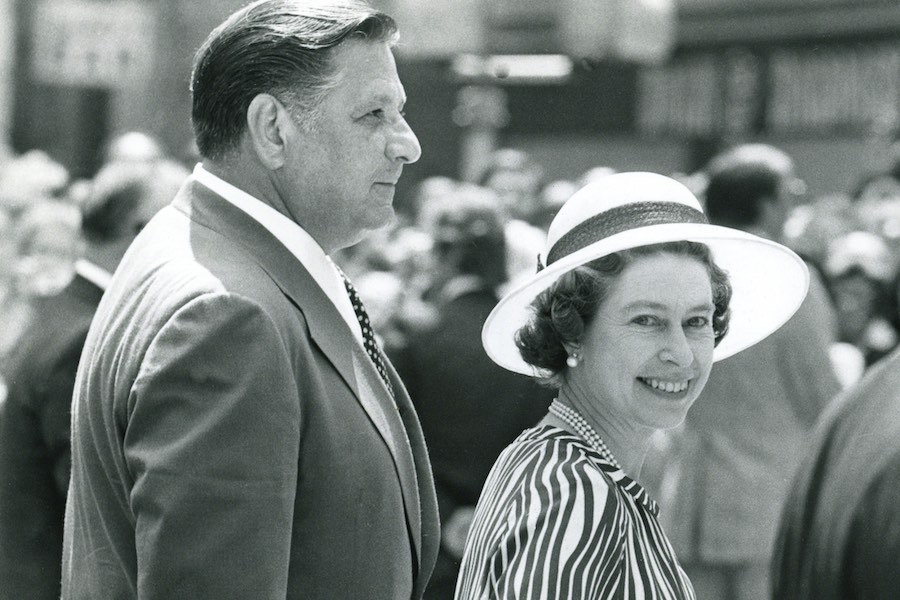 Ever since I was a wee lad in times of yore when my sister, who is five years my senior, was glued to the TV watching Princess Diana walk down the aisle, I’ve been convinced there are two types of people in this world: those obsessed with the royals and those of us who couldn’t care less. And it seems that Philly TV stations are convinced that most of us are the former, based on their relentless coverage of Queen Elizabeth, a monarch from the other side of the world.

Within moments of Queen Elizabeth’s death, 6ABC had a team out in Rittenhouse Square getting reactions from commoners, some of whom didn’t even realize she had died. The station also went to Philadelphia International Airport to hear what travelers had to say on the, uh, subject. And then there’s 6ABC’s retrospective of Queen Elizabeth’s 1976 visit to Philly, when she hung out with Frank Rizzo.

But Fox 29 gets the prize for overdoing it on the queen’s death. They did an interview with a local woman who once met the queen, and she spoke of the royal’s “magical blue eyes.” One Fox 29 reporter crossed the bridge into Haddonfield to check out some Queen Elizabeth memorabilia at an English gift shop. And then there’s this story on Fox 29’s website: “What Happens to Her Corgis?” Yes, less than 12 hours after Queen Elizabeth died, we must drill down into the future of her dogs.

Pennsylvania Auditor General Timothy DeFoor just released a report on toll collection on the Pennsylvania Turnpike and found that uncollected tolls surged in 2021. Originally, uncollected tolls were thought to amount to about $104 million last year. But according to DeFoor, the number is more like $155 million. Uncollected tolls happen when cameras don’t properly record license plates on cars without EZ-Pass or when scofflaw drivers just don’t pay the toll-by-plate bills they get in the mail.

DeFoor also points out that the state currently gives free rides on the roadway to turnpike employees and contractors, including when they aren’t even working. The state gave away $8.4 million in such free rides over the last three years, compared to just under $6 million in the three years before that. The auditor general’s office suggests putting some restrictions on those free rides or ending them completely.

Those of you who get all grumpy when the cashier in the checkout line tells you, “I’m sorry, we no longer have plastic bags” will be unhappy to know that Wegmans has just announced it will longer offer plastic at any of its Pennsylvania stores. We’re the last state to get the no-plastic treatment from the chain.

“Completing our transition out of single-use plastic bags across the company is a big celebration as we continue to expand our sustainability efforts and focus on doing what’s right for the environment,” Jason Wadsworth, a Wegmans exec, said in a statement. “We started on this journey in 2019 when we set out to eliminate plastic bags in our New York State stores ahead of the state plastic bag ban. A lot has happened over the last three years, but that early success in New York showed us the impact we could make and drove us to continue on our journey to be plastic bag free by the end of 2022.”

Want a paper bag at Wegmans? That will cost you five cents.

There’s reportedly trouble in the higher ranks of the beleaguered Philadelphia Police Department. It centers on Christine Coulter. She’s the deputy commissioner who made history by becoming the first woman to be police commissioner in Philadelphia back in 2019 when she temporarily replaced commissioner Richard Ross, who’d resigned abruptly amid a scandal. Then Danielle Outlaw swooped in from the West Coast to take the job.

Some police sources say that Coulter recently got into it with Outlaw over some unspecified police incident and that Outlaw told Coulter she could accept a demotion or find something else to do with her life. Some reports surfaced Thursday night saying that Coulter had left the department. But Coulter told Fox 29 that wasn’t true. We’ll have to see how this one plays out.

Based on the glorious weather forecast for Friday and Saturday, I’m going to suggest grilling. If you’re not the stay-at-home type, you might consider checking out one of Philly’s newest restaurants. Looking for more ideas? Here are 84 of them.

And from the Sandy Hingston Sports Desk…

We learned yesterday from the Inky’s Rob Tornoe that Stephen A. Smith occasionally — occasionally! — blows a call, as he did on Wednesday when he was apparently unaware of the Jalen Raegor trade in a discussion about the Eagles on ESPN. If you’re not a Smith fan, you’ll enjoy the clip.

And speaking of the Eagles, the Wall Street Journal’s Jason Gay, in his annual football preview, dubbed the NFC East “the famously undeserving media attention hog of the NFL” and declared that the Eagles under Jalen Hurts have “a surprising number of believers,” which — screw you, Jason.

In Phils news, tonight is Childhood Cancer Awareness Night at Citizens Bank Park, which means First Lady Jill Biden will be attending, no doubt wearing her beloved Phillies jacket, which gives us an ideal opportunity to commemorate that time Lady Di wore an Eagles jacket. Who ever said this wasn’t a fashion capital?

Looking ahead to the weekend, continuing its tradition of random almost-but-not-quite-the-same starting times, the Phils kick off tonight at 7:05, Saturday at 6:05 and Sunday at 1:05 (so annoying); the Union play in Orlando at 7:30 Saturday; and the Eagles kick off their season vs. the Lions at 1 on Sunday. Oh, and Temple, which got crushed 30-0 in its opening game against Duke last Friday, plays its home opener (under new coach Stan Drayton) at 1 p.m. Saturday at the Linc. For some reason, plenty of seats are still available, for as little as $20 a pop. (We only jest because we love … )

Which leaves us just enough space to note that the Phils laid a you-know-what last night (with a 6:45 start — c’mon, guys!) for Bark at the Park Night, losing to the Marlins 6-5, which we didn’t really mind because damn, you guys, your pups are cute. And God knows we needed something to distract us from those hideous maroon-and-blue uniforms. —Sandy Hingston