Philadelphia Has a Real Chance to Improve Gun Control. Our Leaders Must Fight for It Like They Fought for the Soda Tax

The Pennsylvania Supreme Court may soon decide a trio of court cases that could give cities like Philly the right to make their own gun laws. Now's the time for Philly leaders to bring their full lobbying energy to the fight. 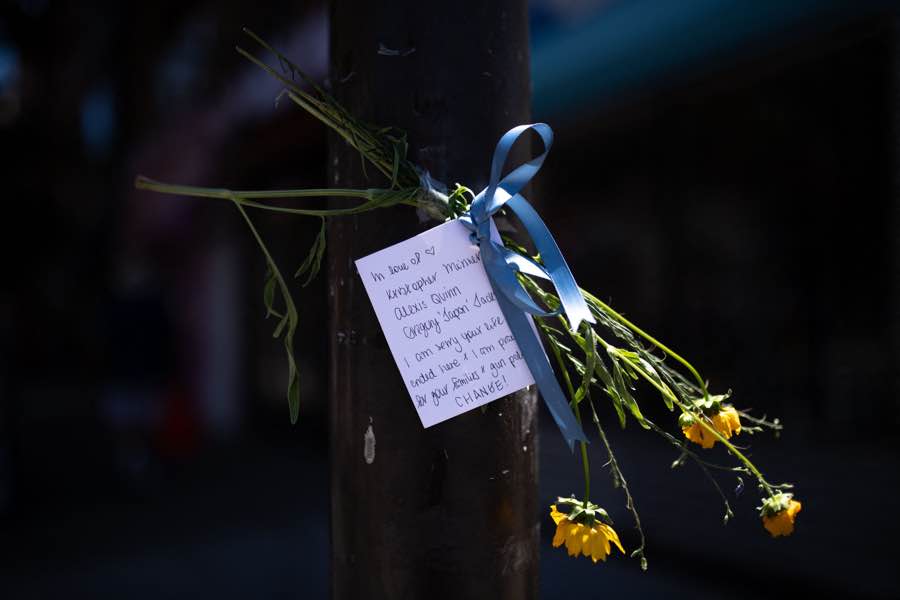 A note and flowers honoring the victims of a mass shooting in South Philadelphia are taped to a traffic light post at the corner of 3rd and South streets on June 5, 2022. Three people were killed and 12 others wounded late on June 4, 2022, after multiple shooters opened fire into a crowd on a busy street, police said. Now is the time for Philly leaders to go all-in for gun control / Photograph by Kriston Jae Bethel, AFP via Getty Images

A typical weekend in Philadelphia has now become one that, sadly, ends with a recap of fatal shootings. This past weekend was no exception, as national headlines reported a mass shooting on South Street that killed three people and injured 12. None of this is shocking; it’s become on trend in a nation whose elected officials won’t take gun control seriously.

Normally, at a moment like this, I would become justifiably cynical, expecting the same tired press conferences, announcements of some special task force or new initiative, and grant money thrown like Band-Aids on a hemorrhaging wound.

None of this will help without a change to the laws and policies that determine how many guns are in the city and who has them. If you listen carefully, Philly politicians have been blaming legislators in Harrisburg for years. On multiple occasions, the city has tried to implement its own rules about gun possession and purchase, and on multiple occasions, it has been overruled in the courts. A Republican-controlled State House has been the biggest roadblock to comprehensive gun control in Pennsylvania. For decades, local municipalities within the Commonwealth have been prohibited from enacting their own gun laws. Until that changes, we’ll remain in the same predicament: a city with a huge gun-violence problem and no self-determination about the laws that govern guns.

But perhaps there’s a sliver of hope. As we wait to see if the U.S. Congress will finally act, there’s something to pay attention to in our own backyard. Right now, three major lawsuits — two involving Philadelphia and one involving Pittsburgh — are potentially going before the Pennsylvania Supreme Court and could change the status quo.

The two cities are trying to strike down a longtime precedent that has given the state legislature sole authority to regulate gun ownership in Pennsylvania. If they win this battle in what’s currently a Democratic-majority Pennsylvania Supreme Court, our city could finally get more say in the gun laws in our own neighborhoods.

This is a big fucking deal — a real chance to confront gun violence in our city.

Philadelphia is to be commended for pursuing these cases. (Of the two cases Philly is involved in, one takes on the state pre-emption directly; the other attempts to require the reporting of lost or stolen guns.) But I think more should be done to make Philadelphians aware of this important effort. Those on City Council and in the Mayor’s Office reading this: I need you to get up and lobby like hell. Make as much noise about this as you all did for the soda tax. Remember the soda tax? When our elected officials rallied hard for something that, just a few years earlier, felt impossible?

For those who’ve forgotten, the campaign to get the soda tax passed was massive. A citywide coalition of community leaders, elected officials, labor bosses, academics and others persuaded people to get on board, to resist intense pressure from the beverage industry and fund something for the greater good: advancing pre-K and rebuilding parks. Whether the tax was regressive wasn’t what anyone cared about at the time. This was Kenney’s big plan for improving early childhood education. He had his heart set on getting it into law. He found ways to get it done.

The controversial soda-tax victory remains Kenney’s biggest achievement in office. He did what his predecessor couldn’t, and it reset our expectations of what local politicians can accomplish with a bit of clout and aggressive use of the bully pulpit. For example, look at how Kenney was also influential in supporting education advocates in their mission to disband the SRC — an act that didn’t require a single vote from City Council.

With Kenney winding down his second term, why isn’t he firing up the influence engine as the city challenges the state’s precedent in regard to gun laws? He said in this very magazine that the one thing that could actually make a change is gun control. Lobbying to pass legislation is different from hoping a court case goes your way, but a healthy dose of public awareness — that this is what handcuffs the city’s efforts to tackle its most existential issue head-on — couldn’t hurt, could it?

It’s time to call all the top players into the room to mount a massive public pressure campaign. Make sure the entire state realizes that we know what’s at stake in these cases and that we demand change in Harrisburg. We need a coordinated progressive effort — including the free press, activists, legislators, and the community at large — to focus on our state’s Supreme Court (just as the nation is currently focusing on SCOTUS with regard to Roe v. Wade). If there was ever a time, now would be it. There’s been too much bloodshed for our officials to sit quietly and wait — to not take a chance on a big play. And unlike at the federal level, where SCOTUS justices serve for life, a public opinion blitz may be effective in Pennsylvania, where justices on the highest court face reelection every 10 years.

Recent studies have found that in states like California, Hawaii, Massachusetts and Connecticut, where stronger gun laws have been enacted — mandatory background checks and permits, permits to carry, requirements for secure storage of firearms, elimination of stand-your-ground laws — there’s less gun violence than in states without such laws.

In this moment, it feels like something different is possible. Even one of the Republican judges who ruled against one of these cases, Judge Renee Cohn Jubelirer, suggested that maybe it’s time to reconsider the precedent, quoting a fellow judge who said, in a different case, “It is neither just to impose unnecessarily harsh limits in communities where they are not required nor consistent with simple humanity to deny basic safety regulations to citizens who desperately need them” [emphasis added].

This is a chance for our own elected officials to do more than offer statements of thoughts and prayers — to take real action to make a difference.

It’s long overdue for Kenney and others to bring that same soda-tax lobbying energy to gun control.