Most of the $155 million the city has budgeted for anti-violence programs is going toward long-term initiatives. But, hello, the crisis is happening right now. 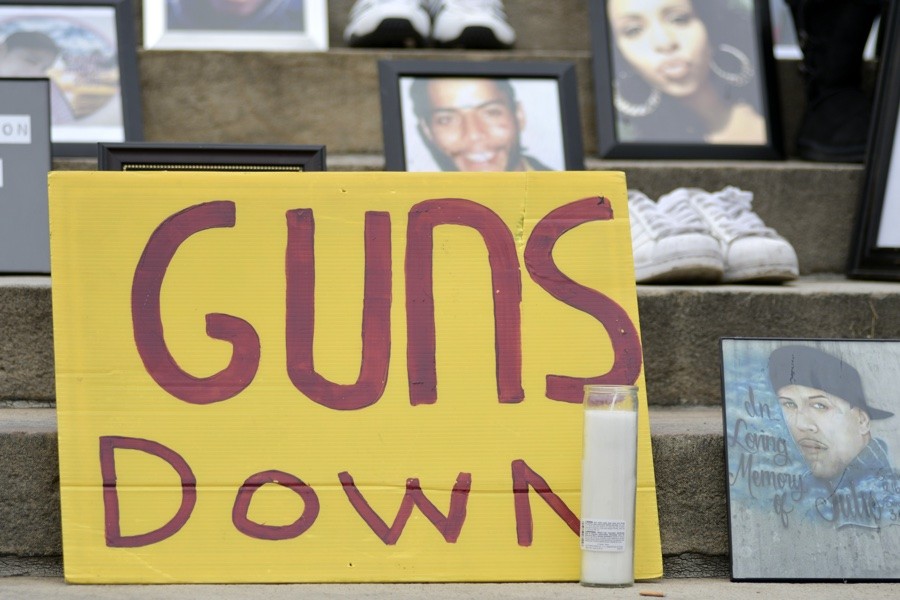 Photos from an anti-gun rally on the Art Museum steps in 2018. (Photo by Bastiaan Slabbers/NurPhoto)

Putting your money where your mouth is means nothing if you’re working with a bad script. Someone should tell that to the Kenney administration as they enact the city’s anti-gun violence budget.

A recent report from the City Controller’s Office reveals that only $68 million of the city’s headline-grabbing $155.7 million marked for addressing gun violence is actual new spending—the rest of it is spending from elsewhere in the budget that’s been recategorized. For example, the Kenney administration designating funds to restore public institutions such as libraries, parks and rec, and even the Dell Music Center—all of which were impacted by pandemic cuts—as “anti-violence spending,”

“These initiatives, while important, are not aimed at combating the city’s gun violence crisis,”  Controller Rebecca Rhynhart said in her report.

But the big bombshell is far more infuriating: Only $33 million, or 21 percent of that $155.7 million, is going toward interventions that will have immediate, short-term impact—and that includes $22 million in yet-to-be-awarded grants. The $22 million dollar program was set up by the administration to deliver grants (ranging from $100,000 and $1 million) to nonprofits that provide “direct trauma-informed healing and restorative practices or safe havens and mentorship programs.” This money is meant to focus on near-term interventions. This is good. But that means that the rest of the money is going toward other things: 70 percent to long-term projects that will take years for their value to be apparent, such as after-school enrichment, mental health support, and youth mentoring. Another 9 percent is going toward improving police response to incidents involving behavioral health. These types of interventions are known to decrease violence in the long term. But this crisis is happening right now.

Why is the city playing games on addressing gun violence head-on? Why is it using deceptive funding ploys, such as recategorizing items within the budget?

One possible answer could simply be politics. Mayor Jim Kenney has been heavily criticized by politicians, activists, and the press for his response to this ongoing crisis. By pumping millions into various community projects and initiatives, he’s able to give himself the kind of image repair that only money can buy. And with the roll-out of these upcoming grants, expect Kenney to be showing up in a lot of neglected neighborhoods, taking photos and flexing his commitment to the public. On the surface, this is politics 101—but in this particular case, it speaks to a deeper problem.

These grants, I fear, are Band-Aids at best and muzzles at worst.  Sure, community groups that receive these grants will feel seen—but they will likely temper their vocal criticism as a result, especially given that the deadline to apply for its latest Anti-Violence Community Expansion Grant program was last week.

And by spending significant so-called gun violence funding to address city issues that are arguably not connected to gun violence, Kenney seems to be more invested in cosmetically addressing gun violence than directly combating it. Revitalized parks are nice and having after-school programs are cool, but their anti-violence benefits are years away. Increasing spending for efforts that immediately and directly intervene with shooters, (such as the work being done with the Community Crisis Prevention Program) in our neighborhoods would be better. But effective short-term interventions are sometimes less appealing because they often involve consultants not based in Philly and don’t put as much money in local pockets as long-term projects do.

So far, nearly 1,600 people have been shot in Philadelphia and over 360 have been murdered this year—the murder figure representing a 17-percent increase from the same time last year. The city should refocus its budgetary priorities to fund intervention programs that serving individuals most likely to shoot or be shot, such as Group Violence Intervention. Data currently shows that cities such as Oakland had seen progress with similar programs as recently as 2018.

It’s not that longer-term programs shouldn’t be funded, but that most of the current money—and certainly much more of the new money—should be geared toward immediately tackling this crisis. A big chunk of the near-term intervention funding hasn’t actually been determined yet because it’s tied up in the anti-violence community expansion grant program, which the city is going to begin awarding now. Let’s hope that the programs that get funded will actually address violence in the near term, because this is, literally, our only shot at funding immediate interventions for a crisis that is happening as we speak.