Hey hey, it's National Pretzel Day again today. Which may lead you to ask yourself: How did Philly ever become synonymous with pretzels? It’s a combo as natural as, um … okay, admittedly, it’s a little weird. But here’s more than you ever wanted to know about how it came to be! 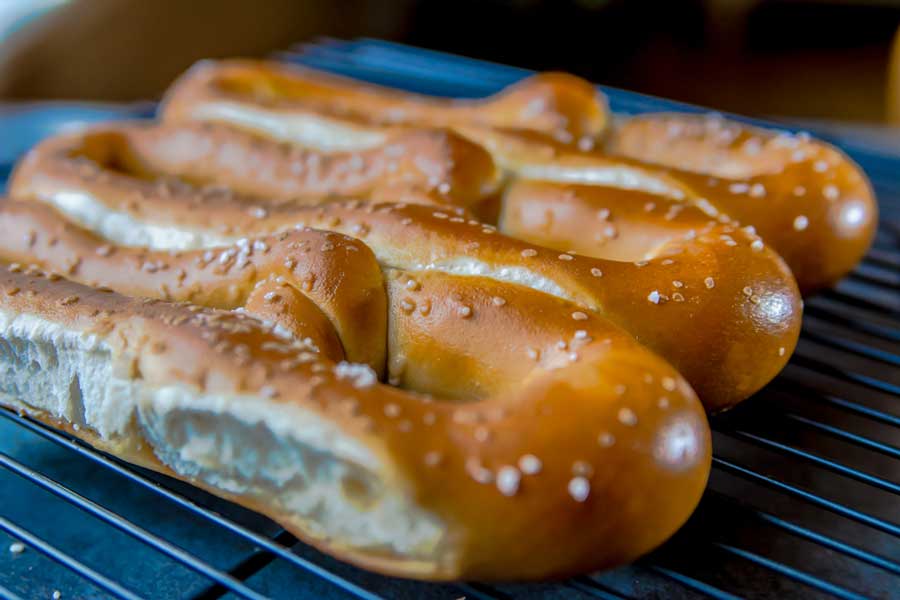 Here’s how the Philadelphia pretzel became such an icon. Photograph by Ashbridge Studios

We Philadelphians love us some pretzels. How much? We eat 12 times as many as anybody else in America, and we make 80 percent of the nation’s supply. Oh, sure, someplace had to be the USA’s pretzel capital, but why us? Here are some of the historical coincidences that brought about this twist of fate.

Heroes of the Past

Pretzel historians generally agree that the pretzel shape has its roots in Christianity. During the season of Lent, early Catholic rules prohibited consumption of dairy, fats and meats, so pretzels — made with just flour, water and salt — fit nicely on the menu. It’s believed early pretzels were soft, like those we treasure in Philly today.

The name may derive from the Latin bracelle, meaning “little arms,” or pretiole, for “little rewards.” Either way, scholars theorize, pretzels may originally have been a treat offered by monks to young students who learned their lessons correctly. By the Middle Ages, they were being distributed to the poor as both food and spiritual supplement, with the three spaces standing for the Father, Son and Holy Ghost. According to one story, in 1510, Ottoman Turks attempted to invade Vienna by burrowing beneath the city’s walls. Pretzel bakers, up early at their craft, heard them and foiled the plot, for which they were rewarded by the Austrian emperor with their own coat of arms.

Pretzels were so widely baked and enjoyed that some historians believe they’re behind the saying “tying the knot” when referring to marriage. According to this theory, the pretzel symbolized the union of two families, and one was broken at the ceremony like a wishbone. In Germany in the 1400s, the traditional Good Friday meal was boiled eggs and pretzels. German children enjoyed pretzel hunts and even wore pretzels around their necks on New Year’s Eve for good luck.

A Skill Worth Having

Per a 1988 New York Times article on visiting Philly’s pretzel factories, pretzel-twisting was the second-highest-paying job in the city back in 1861. (Tobacco workers were the highest paid.)  The article states that the first pretzel factory in America was opened in Lititz, in Lancaster County, in 1861 by Julius Sturgis; one of his sons, Lewis, ran it almost until his death in 1976. He would tell stories of how his father learned his recipe from a traveling hobo and how the family sent pretzels to a son who was imprisoned at Andersonville during the Civil War. Among the pretzel factories the Times recommended touring were the still-extant Center City Pretzel Co., Philadelphia Soft Pretzels, Inc. (whose pretzels went into space on the Columbia space shuttle in 1996), and the Federal Baking Company. Per the 1987 book The Larder Invaded, the earliest record of a street vendor selling pretzels in Philly is of one Daniel Christopher Kleiss, in the 1820s.

According to the Heinz History Center (yep, Heinz as in the mustard mavens), in the 1800s, a distinction arose between taverns, which served food and drink, and saloons, which focused solely on drink, mostly beer, and whose clientele was largely male. Germans dominated the beer biz, so when crafty saloonkeepers figured out they could sell more beer if they served salty treats to whet men’s appetites, they naturally turned to pretzels. They sometimes even offered a free lunch of pretzels, pickles and cheese. This aroused the ire of the rising Temperance movement, which argued that the tactic was contributing to family deterioration by keeping men away from home at lunchtime. Ooh, pretzels, you family-destroyers, you! Pretzels also suffered during World War I from anti-German sentiment; patriots banned them from saloons, and the Los Angeles Times declared them “too German to be taken seriously.” Prohibition threatened the pretzel’s survival, but it actually thrived, as folks bought them to accompany their home brews. One major innovation was the debut of the pretzel rod — so much simpler to make than its twisted kin.

Which sets the scene for 1947 and the debut of the Reading Pretzel Machine, a mechanical marvel that could twist 250 pretzels per minute. The snack food, formerly largely confined to the Mid-Atlantic states, spread out across the country in its hard, crunchy form, which could be stored for long stretches in tins and bags. Forty years later, in 1988, Anne Beiler, better known as Auntie Anne, introduced her ideation of the soft pretzel at a farm stand in Pennsylvania Dutch country; there are now more than 1,500 franchises. Apropos of nothing in particular, in 2002, while watching a football game, President George Bush choked on a pretzel and briefly lost consciousness. The offending pretzel was reportedly a handmade version — from Lancaster County.

The biggest pretzel ever made was baked by (of course) a Philly guy, Joe Nacchio. It measured five feet across and weighed 20 pounds. Unless, of course, you believe the Guinness Book of World Records, which cites one baked in El Salvador in 2015 that was 29 feet long by 13.3 feet wide and weighed 1,728 pounds. Why, El Salvador, why? You know who could have resolved this discrepancy? The Pretzel Museum, opened in 1993 on North 3rd Street, which celebrated all things pretzel and let visitors try their hand at twisting dough. Alas, it’s now out of business. But National Pretzel Day, first declared by then-Pennsylvania governor Ed Rendell in 2003 to acknowledge the importance of the industry to the state, lives on, celebrated each April 26th. Thank God.