The meteorologist who brought total winter snow predictions to Philadelphia back in 1997 explains why climate change is forcing him to retire them. 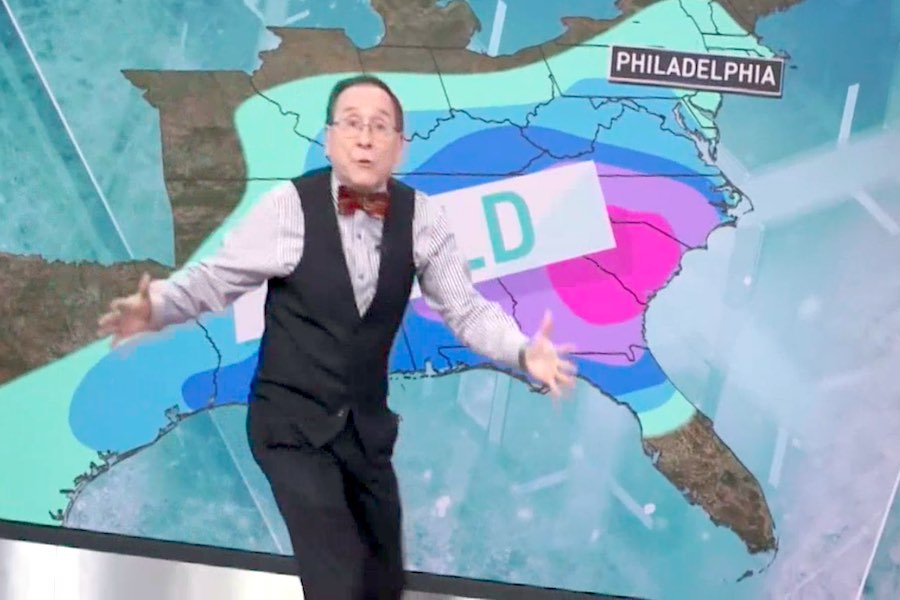 Hurricane Schwartz during his 2019 Philadelphia long-range winter weather forecast, which he says was his last (Screenshot via NBC 10)

Every November, 6 ABC’s Cecily Tynan and NBC 10’s Glenn “Hurricane” Schwartz come out with their long-range Philadelphia winter weather forecasts. They purport to tell us how much snow we’ll get in December, January, February and March — as many as four months from the date of their predictions. And though these Philadelphia winter forecasts are great for ratings, they’re frequently very, very wrong. Case in point: In 2019, Tynan said we could get anywhere from 18 to 24 inches of snow, while Schwartz predicted as much as 35 inches. And what did we get? Are you ready for this? Three tenths of an inch. As in zero-point-three inches of snow.

Well, after Tynan released her latest Philadelphia long-range winter forecast in mid-November, I waited and waited for Schwartz to do the same so I could compare them, as I have in the past. Repeatedly. But Schwartz’s never came. So I called him at home to find out what the holdup is.

I’ve been waiting like a kid sitting beside the tree on Christmas morning for you to release your long-range Philadelphia winter weather forecast. So what gives?
There are two reasons. First, with all of the death and destruction and the political turmoil and insanity that’s been going on recently, it just seems much less important to take up time with these seasonal forecasts.

And second?
I have determined these forecasts to have marginal what we call “skill.” Skill is anything better than flipping a coin. There’s no reason to do them at this point other than public demand. I’ve always said that if it ever got to the point where I didn’t feel the confidence to be able to do it with skill, then I would ask: Why are we doing it? We used to do them with skill.

What changed?
I started this monster in 1997. There was an extreme weather pattern setting up for the season, and it was a pretty easy forecast. Over the years, I’ve developed and tried to improve other techniques of seasonal forecasting. What we would do is look back in the past at similar patterns in the oceans and atmosphere all over the world. And there would be what we call analogs. We would find years that were somewhat similar, and we’d look back and see what happened in those years and use that to develop the seasonal forecast.

Philadelphia’s winter is now almost five degrees warmer than it was in 1970, so it’s not the same climate anymore. How can I look back to 1970 as a comparison when I can’t even look back to 1990 anymore? We are living in a totally different world.

So your long-range winter forecasts used to be more accurate?
Yes. But I feel that my forecasts for the last 10 years haven’t been as accurate as the previous 10 years. And forecasting is supposed to get better, not worse.

You’ve been doing these since 1997. When did you first notice that something was amiss?
It’s been a gradual thing. I’ve been a professional forecaster for 48 years. I go back a long way. I’ve been obsessed with weather forecasting since I was a kid. The climate has been changing for a long time. I was studying climate change in the ’70s. But in the past 10 years, there has been an acceleration. The changes are coming, and they’re coming faster and are more dramatic than they were in the first 10 years of this century. There’s just not the same kind of science that there is for the day-to-day or seven- or 10-day forecasting.

Okay, but viewers love watching these forecasts, right? They’re great for ratings. So if you didn’t have the first reason you mentioned not to do them, all the turmoil and such, do you think the station would have insisted that you do one this year?
I don’t know that. It’s certainly something the station has liked. We have seen results from the very beginning. And that’s why the other stations started jumping on board. Some of them would wait until we would do our promo about when we were gonna do it, and then they’d do it the same night to try to cut down on our ratings. We never did that. We’ve always been the leaders, not the followers.

You brought up the 10-day forecast, which I understand you were also the first to do in Philadelphia. But in his 2012 book The Signal and the Noise, statistics expert Nate Silver basically called the whole idea of a 10-day forecast bunk.
Oh, I’ve read the book. And I have, overall, been a big fan of his. But I was incredibly disappointed with his chapter on weather forecasting. It was a shock to me to read something from him that was just so, so wrong. He just doesn’t get it.

How was he wrong?
Nate is a specialist in certain things he does. But with the weather, there are thousands and thousands of meteorologists and other scientists who devote their entire lives to forecasting weather and verifying those forecasts in any way possible. I go back and verify my forecasts all the time. There are people at universities, people in Washington with the National Weather Service. There are people all over verifying forecasts with science, and Nate just doesn’t understand the science.

So you stand by your 10-day forecasts?
Absolutely. We are able to do those with some degree of skill.

How much skill are we talking about here? You said that skill meant being better than the flip of a coin. So how much better?
The forecast for tomorrow is easy. Then the skill goes down each day from day one to day 10. The skill will improve slowly over the years as the science gets better. And here’s the funny thing. People say that our forecasts are no better than they were 50 years ago. But the truth is that they are so much more accurate that now, people actually change their plans based on your forecast. So when you are wrong, they get very angry about it. But our forecasts are so, so good. I just hate the seasonal-forecast stuff.

Speaking of changing plans based on a weather forecast, I know some people who bumped their outdoor Thanksgiving celebrations from Thursday to Friday because there were calls for a rainout on Thanksgiving Day. But Thanksgiving Day wound up being gorgeous. No rain. Warm. I didn’t see your forecast specifically, but if the forecasts are so good, what happened there?
I remember that very well. A few days before, it was looking like a rainy day. But then I became more optimistic, and I told people that — while the other stations were still calling for rain. I was so excited when I saw the sun come up that morning. I was jumping up and down in joy. This was my Sunday football game, and I just made the big play.

Why were you right while others were wrong?
One reason is that I don’t get quote-unquote “married” to my forecasts. So if I said something two days before, I’m not gonna be stubborn and keep it that way. If I see the evidence, I will make the change.

It’s all based on evidence and science. This goes back to the blizzard of ’96. That’s where I made my reputation in Philly. I was two months into a job here and thrown into the fire, because both Bill Henley and John Bolaris were on vacation in the days leading up to it. It was looking like a big storm, and then the Friday before, the computer model backed off on the storm dramatically. But there was a weakness in that computer model, and I saw it. So the other forecasts backed off on their predictions, and I said that I didn’t see any reason to change it. And so I got credit for having the most accurate forecast for that storm.

This is all well and good, but what my kids want to know is this: Will they be able to sled down the Art Museum steps or not?
The odds would favor that, yes. And the odds of getting 0.3 inches of snow for the second year in a row would be pretty tiny. The odds of getting 20 different occasions when they could do that over the winter is also small, and that goes down every year.

So you’re done with the long-range Philadelphia winter forecast. But obviously, Cecily is not. Should we put much stock in hers?
I don’t know what her method is or where her forecast comes from. But you can look at it at the end of the season and see for yourself.