Judge Matthew Brann equated the Trump campaign's argument to "Frankenstein's Monster." That, plus the other five best quotes from the decision, which has cleared the way for counties across Pennsylvania to officially certify the election results. 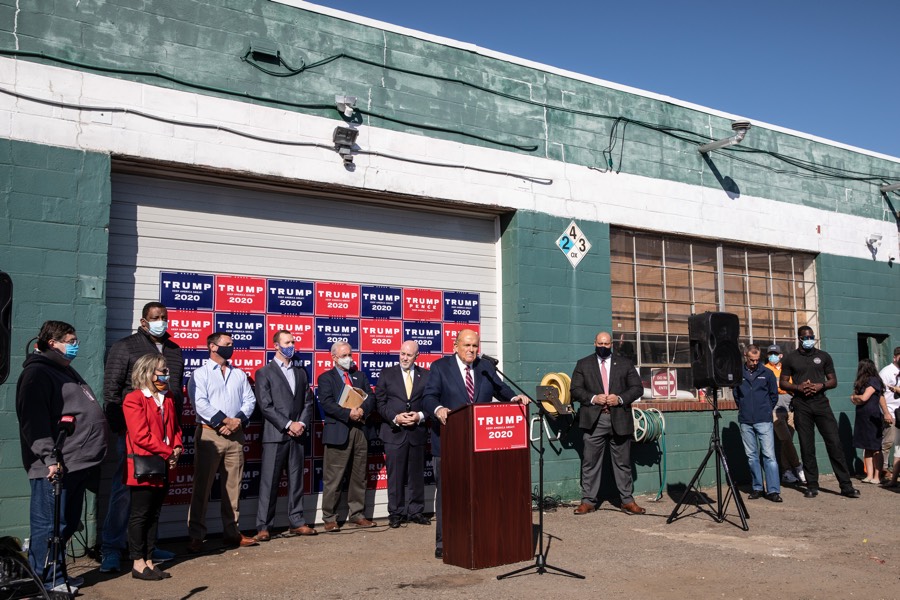 Election certification in Pennsylvania can continue as originally planned after a U.S. District Court judge tossed one of the Trump campaign’s final lawsuits seeking to delay it. Which is bad news for Rudy Giuliani, pictured here at the Four Seasons Total Landscaping parking lot in Philly. (Photo by Chris McGrath/Getty Images)

The Trump clown car of hapless lawyers has officially concluded its tour of the Pennsylvania court system. Over the weekend, U.S. District Court judge Matthew Brann dismissed one of the Trump campaign’s final lawsuits in the state, which sought to prevent statewide certification of the election results by suing secretary of state Kathy Boockvar along with seven county board of elections offices, including Philadelphia’s. Now that Brann has spiked the lawsuit — in one part of his opinion, he likens the Trump campaign’s shoddily constructed argument to “Frankenstein’s monster” — the state board of elections is free to certify the election by the Monday deadline. (Reportedly, some counties are running behind schedule, although many, including Montco, have officially certified their results.)

The Trump legal charade would be somewhat comical — Giuliani giving a press conference at the Four Seasons (Total Landscaping); holding another press conference as a mysterious black liquid trickled down both sides of his face as if he’d been recently disinterred; now-former Trump attorney and incarnate 4chan message board Sidney Powell floating conspiracy theories about voting machines flipping millions of vote totals — if it weren’t all so unhinged. Not to mention the fact that even amid this most pitiful cast of legal characters, the Republican Party writ large still hasn’t admitted what the rest of the country knows: Biden won. That has arguably been the larger national farce — though it comes as a relief that this time around, at least, the courts have declined to go along for the ride.

What makes the dismissal in this lawsuit especially noteworthy is the judge who did the dismissing: Brann, who, in Senator Pat Toomey’s words, is “a longtime conservative Republican,” not to mention a member of the über-conservative Federalist Society. Brann, as it turns out, was nominated to the bench by Barack Obama — back in that now unfathomably quaint (or was it naive?) era in which a Democratic president could be convinced to nominate a conservative judge to the court in the name of compromise.

Point being, if you were a Republican political campaign trying to overturn the results of an election, you’d probably love nothing more than to plead your case before a conservative judge. Trump’s D-list attorneys managed to get that wish. And yet their arguments were so amateurish that Brann had no choice but to drop the hammer on them in his opinion. (The Trump attorneys have appealed to the Third Circuit Court of Appeals, but counties have already started to certify their results, which is exactly what the lawsuit is trying to prevent.) Here are six highlights from the decision.

1. “Although this case was initiated less than two weeks ago, it has already developed its own tortured procedural history.”

When the judge describes your case as having a “tortured procedural history,” things usually aren’t going well.

2. “Plaintiffs’ only remaining claim alleges a violation of equal protection. This claim, like Frankenstein’s Monster, has been haphazardly stitched together from two distinct theories in an attempt to avoid controlling precedent.”

The upshot in the case at hand was that two voters, one from Lancaster County and one from Fayette County, had their mail-in ballots canceled because they failed to properly fill them out. Pennsylvania secretary of state Kathy Boockvar had issued guidance to all of the counties across the state stipulating that they had the option of informing voters of faulty ballots and allowing them to “cure” the ballots in advance of Election Day. Philadelphia followed that guidance; other counties, including Lancaster and Fayette, didn’t. The suit, then, was based on the idea that voters whose counties declined to allow “curing” were discriminated against under the equal protection clause of the Constitution. You can tell from the quote above what Judge Brann thought of that argument.

3. “Prohibiting certification of the election results would not reinstate the Individual Plaintiffs’ right to vote. It would simply deny more than 6.8 million people their right to vote.”

Set aside for a moment whether Boockvar’s guidance actually violated the Constitution. Another important aspect of a lawsuit is whether you have standing to sue in the first place. To have standing, you need to be asking the court for appropriate redress. But that’s not what the Trump campaign was doing; instead, it sought to cancel millions of other votes that had nothing to do with the two plaintiffs. What’s more, Brann notes in his opinion that the lawsuit names secretary of state Boockvar as the principal defendant even though she issued the guidance that would have allowed the two plaintiffs to fix their ballots. It was Lancaster and Fayette counties that prevented that from happening, not Boockvar.

In other words: Brann concludes that the plaintiffs didn’t have standing to sue in federal court in the first place; and even if they did, their argument was so bad that he likened it to Frankenstein.

4. “Expanding the right to vote for some residents of a state does not burden the rights of others.”

This gets to the point of why what happened to the two plaintiffs doesn’t violate the equal protection clause. It is such a blindingly obvious claim that it should go without saying. Unfortunately, here we are. It had to be said, and good on Brann for saying it.

5. “Even assuming that they can establish that their right to vote has been denied, which they cannot, Plaintiffs seek to remedy the denial of their votes by invalidating the votes of millions of others. Rather than requesting that their votes be counted, they seek to discredit scores of other votes, but only for one race. This is simply not how the Constitution works.”

Another sign your lawsuit isn’t going well: when a judge says of your argument, “This is simply not how the Constitution works.”

6. “The Trump Campaign and the Individual Plaintiffs seek to discard millions of votes legally cast by Pennsylvanians from all corners — from Greene County to Pike County, and everywhere in between. In other words, Plaintiffs ask this Court to disenfranchise almost seven million voters. … One might expect that when seeking such a startling outcome, a plaintiff would come formidably armed with compelling legal arguments and factual proof of rampant corruption, such that this Court would have no option but to regrettably grant the proposed injunctive relief despite the impact it would have on such a large group of citizens. That has not happened. Instead, this Court has been presented with strained legal arguments without merit and speculative accusations, unpled in the operative complaint and unsupported by evidence. In the United States of America, this cannot justify the disenfranchisement of a single voter, let alone all the voters of its sixth most populated state. Our people, laws, and institutions demand more.”

Now, that is what you call a mic drop.