At a press conference on Wednesday morning, Joe Biden's campaign manager and senior advisor remained bullish. Trump's campaign isn't ready to give up yet. 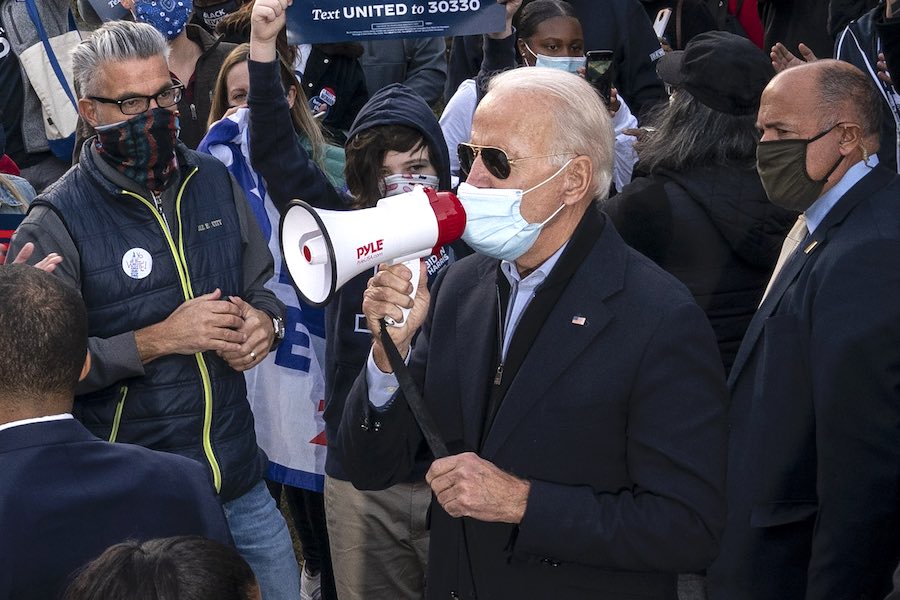 As election workers continued counting Philadelphia votes inside the Convention Center on Wednesday, the morning after Donald Trump falsely declared himself the winner, the Joe Biden campaign insisted that there will be a Biden win in Pennsylvania.

Biden’s national campaign manager Jen O’Malley and senior advisor Bob Bauer met with reporters via Zoom to discuss the status of the election results, including in Pennsylvania specifically.

“Joe Biden is on track to win this election, and he will be the next President of the United States,” O’Malley told the hundreds of reporters on the call. “By this afternoon, we expect the Vice President will have leads in states that will put him over 270 electoral votes.”

O’Malley estimated that there are about 1.4 million outstanding ballots in Pennsylvania, most from Democratic-heavy areas.

“Some of them will be for the Vice President,” said O’Malley of the ballots that have yet to be counted. “Some for Donald Trump. But Joe Biden believes that all of them should be counted. And when the votes are tallied the way they have been in every election since our country has been founded, we are confident that Joe Biden will be the President of the United States.”

Bauer, an attorney who served as the White House Counsel under Barack Obama, pointed to some recent Republican efforts in Pennsylvania as a sign of Trump’s desperation.

“With the ballot drop boxes, they attempted to claim in both federal and state court that these drop boxes were prohibited and likely to give rise to fraud,” Bauer said, referring to a case heard in the Western District of Pennsylvania. “These claims failed completely. “Then with the in person absentee voting, Republicans brought lawsuits in two of Pennsylvania’s largest cities and tried to shut it down on specious claims that they had not been provided access to witness the voting. Again, suits rejected.”

Of course, Trump’s campaign is far from conceding Pennsylvania. His own campaign manager, Bill Stepien, downplayed any notion of a Biden advantage in Pennsylvania when he spoke with reporters on Wednesday morning.

“We feel like the president is in very, very, very good position this morning,” campaign manager Stepien said. “If all legally cast ballots are counted, the president will win,” he added.

Trump said on Tuesday night that he plans to take the battle to the Supreme Court, calling the election a fraud and the “late” counting of votes an effort by Democrats to try to “steal the election.” However, legal experts – including Bauer – say there’s currently no standing to take this to the Court.

“Let me tell you this,” Bauer said on Wednesday. “If you go to the Supreme Court today and drive around the building, you will not see Donald Trump or his lawyers… If he arrives at the Supreme Court with the novel proposition that ballots lawfully cast by eligible voters weren’t counted by the time Donald Trump wanted them to be counted, he will be in for one of the most embarrassing defeats.”

As of Wednesday morning, when several pivotal races were still up for grabs, Biden did achieve one victory of sorts. He has received more votes than any other presidential candidate in all of United States history, even besting his former boss, Barack Obama, who previously held the record. Of course, as we all know, the popular vote doesn’t mean a thing.