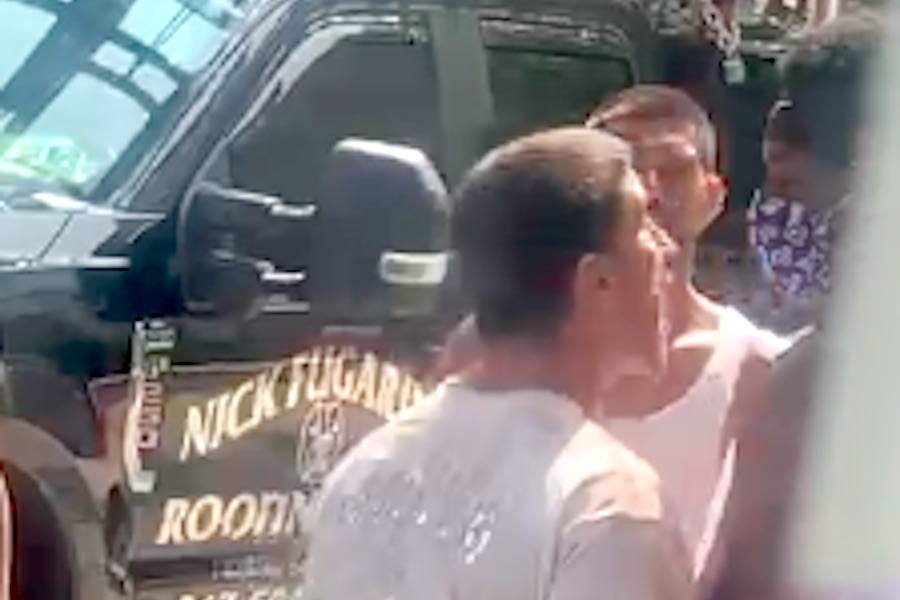 South Philly roofer Nick Fugarino screams at a Black man during an incident on Monday.

Thanks to a partial foot amputation, Stephanie Sena tries to park as close as possible to her home in South Philadelphia. After dropping her daughter off at school just before 8 a.m. on Monday morning, Sena returned home to find a spot right by her house. So she pulled into it. But, Sena says, somebody else wanted the same spot: South Philly roofer Nick Fugarino.

As Sena pulled into the spot, Fugarino blared on his horn. Fugarino and Sena exchanged some words, as tends to happen in  South Philly whenever there’s a parking dispute. But Sena decided to just let it go. So she moved and parked elsewhere.

When Sena walked back to her house, she pulled out her phone to take a photo of Fugarino’s van. She said she did this because he was so “rude and loud” to her a few moments before. And she wanted to make sure she had the company’s name and phone number for reference. Just in case.

But when she pulled out her phone to take a photo of the truck, things escalated quickly. The South Philly roofer, by his own admission, grabbed Sena’s phone out of her hand.

“Why wouldn’t I take her phone?” Fugarino said to me on Monday afternoon. “I didn’t want her to take a picture of my van and then use it to slander me.”

After he grabbed her phone away from her, Sena says that an unmasked Fugarino began screaming at her and that he intentionally spat in her face. When I first asked the South Philly roofer if he spat in her face, he denied it. But then he said he might have.

Sena says that Fugarino then asked if she had a husband or son in the house so that he could settle this with a man. But then, claims Sena, Fugarino told her that he would actually hit a woman in this case. Fugarino says he did tell her to send a man out to deal with it but denies saying he would hit a woman or threatening Sena in any way.

“I went inside to call the cops,” Sena recalls. “First, I triple-locked the door. I was scared out of my mind.”

Police responded to the scene and took a report. But the cops told Sena she should file a private criminal complaint with the DA’s office. The Private Criminal Complaint Unit at 1425 Arch Street handles more minor offenses like harassment, terroristic threats and simple assault. The cop on the scene gave her the paperwork for that office.

Sena posted a photo of the South Philly roofer’s truck on Facebook, writing, “I don’t feel safe with him and his truck outside my house.” She also mentioned Fugarino’s criminal past, which includes guilty pleas to aggravated assault and burglary, both felonies.

This all happened in the morning, and as the hours progressed, friends and neighbors began weighing in on Facebook and sharing her post.

Then, around 12:45 p.m., something else happened. Sena currently has a houseguest, La Salle student Daouda Elegbe. La Salle called Sena when the school shut down its on-campus housing due to COVID and asked her if she would take in Elegbe. (Sena is well known for her activism with Philly’s homeless population — and with college students.) And she did. And when Elegbe learned what had transpired outside of the house earlier in the day, he felt like he had to do something.

“This just didn’t sit right with me,” says Elegbe, who was born in Harlem but grew up in Angola. “Stephanie has sheltered me and taken me in like family, and this man treated her like this. I wanted to talk to him.”

Elegbe claims he wasn’t trying to fight Fugarino. On the other hand, he says that he also couldn’t “just let him get away with this.” He walked outside.

“I wanted to reason with him,” Elegbe insists. “But you could just see it in his eyes. He was ready to fight me on sight. Within ten seconds, he was just screaming at me. He said he was going to put a knife in my neck. I kept my composure. I kept my hands down at my side. And I just let him scream.”

Sena captured the next part on video:

Fugarino, unmasked, yells directly into the face of Elegbe, who speaks with a strong accent.

“We’re from here,” screams Fugarino. “I don’t know where the fuck you’re from, but you better go the fuck back there.”

After Elegbe calmly tells Fugarino that he’s from “New York City, Harlem,” Fugarino seems to get even angrier. “Fuck New York City, pussy!” he yells. (What you can’t see in the video is that it all takes place in front of a large Black Lives Matter sign that Sena has in her window.)

The video stops there, but Elegbe says that things ended shortly thereafter. He says he told Fugarino that he was going to pray for him and that Fugarino replied, “Go pray for yourself.” And Elegbe went back inside.

Sena posted the video on her Facebook page, and it quickly racked up about 10,000 views. Friends shared the video, and Fugarino began to get calls on his company line from people who were angry about what he said in the video. Some people went after Fugarino’s company pages, calling him a racist and encouraging prospective customers to look elsewhere when they need a roofer.

Like most people accused of being racists, Fugarino insists he isn’t one. Both in Facebook comment threads and during a phone conversation I had with him on Monday, Fugarino presented the fact that he has Black relatives as proof that he’s no racist.

“All these people are coming after me, but I am the one who is the true American dream,” Fugarino told me. “I started this company from nothing. And now this happens. She’s using this African as a suicide bomber.”

Suicide bomber? I was a little perplexed by what Fugarino meant by that one.

We talked a bit longer. Fugarino kept insisting that he’s not a racist, something he has reiterated on social media.

“You don’t have to be racist to be a complete fucking asshole,” replied Philly DJ Kevin Kong to Fugarino on Facebook.