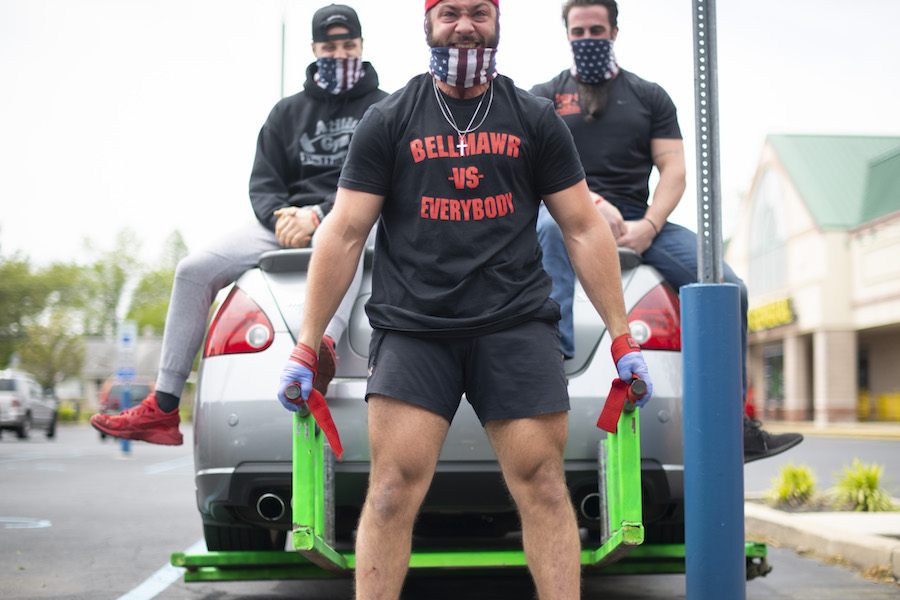 A man lifts the rear of a car outside of defiant Atilis Gym in Bellmawr, New Jersey (photo via Getty Images)

It has been a while since I gave Atilis Gym in South Jersey even a fraction of a thought. Way back in mid-May, which seems like ages ago at this point, I told you about the owners of Atilis Gym, who refused to follow New Jersey Governor Phil Murphy’s COVID shutdown order. Then an anti-shutdown activist was charged over a protest she organized at the Bellmawr gym, which is less than 15 minutes over the Ben Franklin Bridge. And very quickly, Atilis Gym became not just a regional but a national poster child for the so-called reopen movement.

And then I just forgot about about it. Hey, meathead gyms like this just aren’t my thing.

But then, on Tuesday, I learned that a New Jersey judge finally started playing hardball with Atilis. The gym continued to flout the law and a court order well into August. And on Tuesday, Superior Court Judge Robert Lougy fined Atilis Gym nearly $125,000. He also ordered the gym to cover the state’s legal costs, to the tune of more than $10,000.

So how can a gym in a tiny South Jersey borough possibly afford all that? Well, a GoFundMe legal defense campaign has, thus far, raised close to $300,000 for the cause. (By the time you read this, it will probably have exceeded $300,000.)

And Atilis Gym shows no signs of backing down anytime soon. In fact, one of the owners told a New Jersey radio station on Tuesday that he intends to take the matter all the way to the United States Supreme Court.

Should Indoor Dining Return to Philadelphia?

It has been more than five months since you’ve had a meal inside of a Philly restaurant thanks to COVID-19. Restaurants in the ’burbs have been seating diners inside for weeks now. But the City of Philadelphia makes up its own rules. And our leaders have continued the indoor dining ban.

The current ban on indoor dining in Philadelphia is set to continue until September 1st. And Philly restaurant owners are itching to know if they’ll be able to use their dining rooms starting in September. Heck, they need to know. Orders. Staffing. Etc.

On Tuesday afternoon, Philadelphia health commissioner Thomas Farley told reporters that he expects to announce a decision by this Friday. Maybe sooner.

“I want my employees and my customers to be safe,” says one Philadelphia restaurant owner, who asked to remain nameless, because he has already had conflicts with the city during the pandemic and doesn’t want more trouble. “But at the same time, I don’t think the city really understands just how underwater some of us are. The Stephen Starrs and the Vetris and the Solomonovs of the world are gonna make it through this just fine. But most of us are just small-time operators. We don’t have a pot to piss in.”

Arrest Made in Sesame Place Assault

Remember when somebody assaulted a 17-year-old Sesame Place employee, apparently because the employee asked the customer to put on a mask?

Police just charged a New York City couple with the assault. (The woman allegedly punched another person who attempted to come to the 17-year-old’s aid.) Of course they are from New York. Nobody from the Philly area would ever assault a minor at Sesame Place, right?

Meanwhile, a GoFundMe set up to help the teen employee, who reportedly required jaw surgery as well as other medical treatment, has raised shy of $6,000.