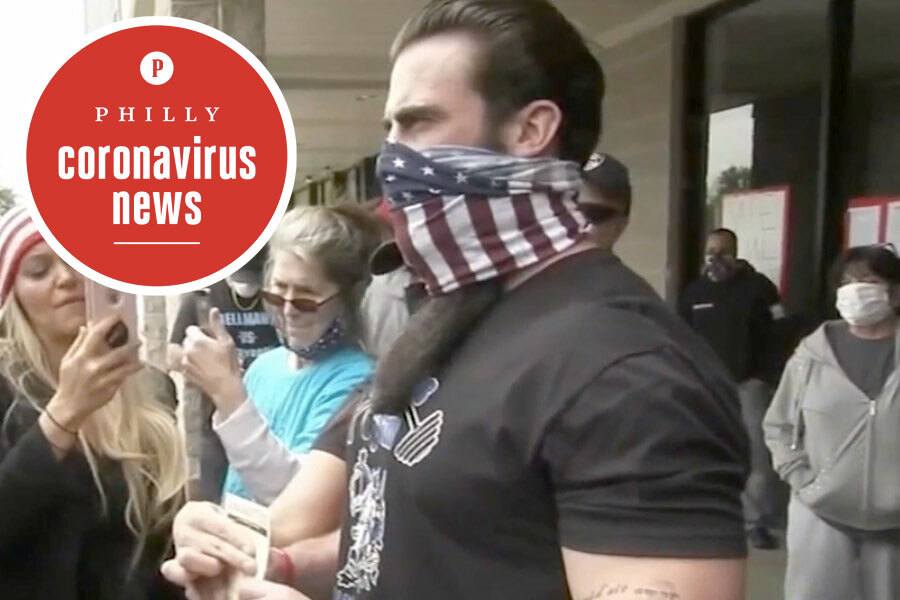 Atilis Gym owner Ian Smith in Bellmawr, New Jersey after police cited him for reopening the gym against shutdown orders. Since then, a GoFundMe has raised over $1,000 per hour for legal defense. (Image courtesy 6 ABC)

The eyes of the anti-shutdown movement were on Atilis Gym in Bellmawr, New Jersey on Monday. (It’s ten minutes from the Benjamin Franklin Bridge, for those of you who never leave the city.) Atilis Gym owner Ian Smith and the gym’s other owners said that they would reopen at 8 a.m. on Monday, against New Jersey’s shutdown orders. And they did.

There were far more reporters and anti-shutdown activists on the scene than Atilis Gym members. The rally, if you want to call it that, was peaceful. Police showed up but then left. Then law enforcement returned, citing the owners for reopening. And Atilis Gym members have been told that they could be cited or even arrested should they decide to work out there.

The gym has no plans to close, and further law enforcement action seems inevitable. And so, there’s a GoFundMe that was set up late on Monday afternoon to cover the citations (up to $1,000 each) or other court costs associated with the Atilis Gym reopening. In the first 17 hours of the campaign, 455-plus donors have put up more than $17,000.

• Business Owners Begin to Revolt Against Shutdown
• Meet Rachel Levine, PA's Lead in the COVID Battle
• What You Need to Know About Puzzling New COVID Symptoms

Here’s a 6 ABC report from the gym:

Meanwhile, Giovanni’s Barber Shop in Media still plans to reopen on Wednesday against Pennsylvania’s shutdown orders. We’ll let you know how that works out.

Farley to Philly: “Don’t Go to the Beach”

You’ve probably seen plenty of photos and videos from folks who took to the Jersey Shore last weekend. In some cases, it was downright crowded.

So with the long Memorial Day Weekend ahead of us, Philadelphia health commissioner Tom Farley has issued some instructions for “what not to do this weekend,” as he put it at a Monday press conference.

“Don’t go to the beach,” Farley said. “It is true that being outdoors is probably less risk than being close to people indoors, but if you go into crowds anywhere, there’s risk. We understand the draw. It’s very tempting. You may have gone to the beach every Memorial Day for years. But this is not the time to do that.”

“I’m certainly not going to the beach,” Wolf told reporters last Friday. “You go anywhere where you’re going to be in close contact with other people, for whatever reason, you’re taking your life into your own hands. You’re jeopardizing your neighbor. You’re jeopardizing yourself, maybe your family. I think you ought to be concerned about that. So personally, I’m not going to the beach.”

That was before crowds gathered over the weekend. And then on Monday, Wolf had more to say.

“There are people there who aren’t wearing masks and you’re putting yourself at risk,” Wolf said. “I wouldn’t do that. I haven’t done that. And I’m not sure why the governors of Maryland and New Jersey have opened their beaches. But they have.”

Back on May 7th, which seems like a lot longer ago than it actually was, Pennsylvania health commissioner Rachel Levine weighed in on trips to the Jersey Shore.

“I know it’s tempting, given the warm weather that hopefully will be coming soon,” Levine said. “But going to New Jersey can have risks. Because New Jersey has had a very high incidence of COVID-19. And if you go to the shore, I bet you other people will go to the shore. It will be almost impossible to practice social distancing… And so, my recommendation is for people to stay home.”

The Philly Restaurant Obituaries Have Begun

Depending on which expert you believe, anywhere from one fifth to one third of all restaurants in Philadelphia will close due to the coronavirus. And those closings have begun.

Over the weekend, we learned that Old City standby Farmicia would not reopen.

“It is with a sad heart and with deepest regrets that we must inform you that Farmicia Restaurant will be permanently closing its doors due to the coronavirus pandemic,” reads a message on the Farmicia Facebook page. “We thank you for your constant support and patronage over the last 15 years, it means the world to us. We could not have done anything without the constant love and support from our loyal guests.”

Welp. With a heavy heart, it’s time to announce the ol’ Riv won’t make it thru this mess (I truly hope this doesn’t start a string of these announcements 🙏🏻).

There are so many rumors out there but the biggest truth of all is that Manayunk is just a different town anymore as far as nightlife goes. We decided as a squad it was just time to cash em in. No one should hang their head, a place like ours had no business making it ELEVEN YEARS. It’s wild and honestly impressive.

I planned on being a lot more long winded but that’s about all I have to say for now, it’s all just a lot. Thanks to anyone and everyone over the years that made this place such a true monster! I’m sure the rest of the crew will have somethin to say. Pm me with any questions.

Personally I plan on being a Jersey shore beach bum and figure out the rest come Sept/Oct. Stay safe y’all!

Guess he didn’t see what Farley, Wolf and Levine had to say about going to the Jersey Shore.