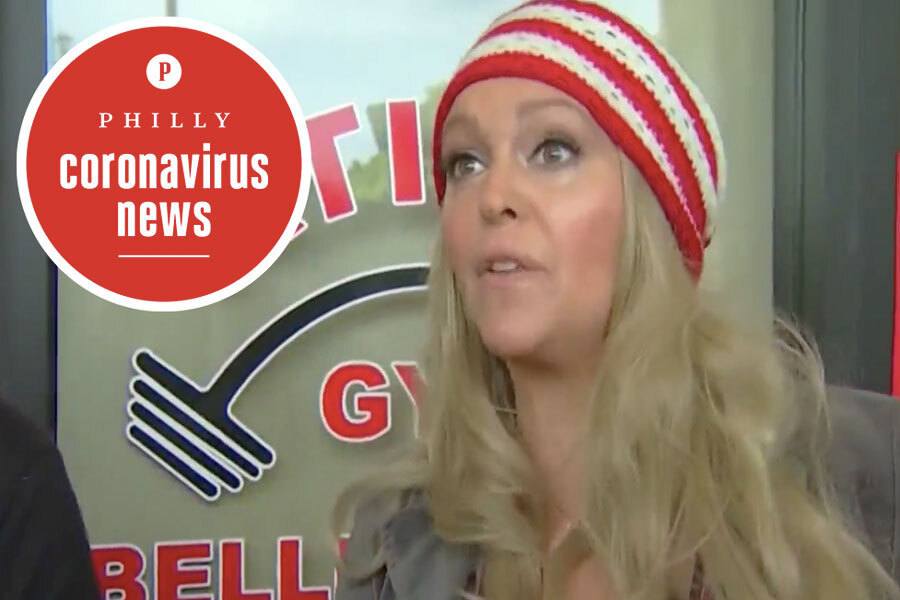 Ayla Wolf, who was charged by Bellmawr police with “organizing a protest” at the reopened Atilis Gym. (Screenshot via NBC 10 report — video below.)

As we told you yesterday, the owners of Atilis Gym reopened on Monday with plenty of police and anti-shutdown protestor presence. Members came and went from their workouts. Nothing big to report.

But Tuesday proved to be a much “different reality,” as New Jersey Governor Phil Murphy promised at a press conference.

On Tuesday, anti-shutdown protestors and members returned to Atilis Gym. And so did members of the Bellmawr Police Department.

According to a statement from Bellmawr police chief William Walsh, police cited Atilis Gym owners Frank Trumbetti and Ian Smith with one disorderly person’s offense each for reopening their gym in violation of the shutdown order. Police issued gym members summonses for using the gym.

Police also charged one person with obstructing the administration of law, reportedly because he refused to identify himself to officers. And police charged anti-shutdown protestor Ayla Wolf with “organizing a protest.”

While anti-shutdown protests in Philadelphia and elsewhere in the commonwealth have gone on without any such charges, as far as we know, this has not been the case in New Jersey. Prosecutors there have filed multiple charges over the last couple of months for “organizing a protest,” which the state says violates one of Murphy’s executive orders because a protest constitutes a gathering.

“I don’t begrudge anyone’s right to protest,” Murphy said in April. “This is America. We all have First Amendment rights… I really wish they would do it at home.”

A “court relief” GoFundMe for Atilis Gym’s owners and members is now up to more than $40,000 in just two days. The GoFundMe campaign has been reported for violating GoFundMe’s terms. One person who reported says he did so because the campaign supports “illegal activity.” GoFundMe has yet to publicly issue a ruling.

Below, a report from NBC 10 from the gym:

One thing you’ll always hear from the anti-shutdown people is some variation of this: If Walmart is open, why can’t this gym or barbershop (or whatever) be open?

Well, here’s a new one for them: Six Flags Great Adventure in Jackson, New Jersey is reopening its safari!

That’s right. The Jersey Shore beaches are open for Memorial Day. And as of May 30th, you’ll be able to experience the 1,200 animals and 350 acres that make up Great Adventure’s drive-thru safari.

Here’s the announcement from the park:

On Tuesday, Pennsylvania health secretary Rachel Levine released new data about the coronavirus in Pennsylvania. In short, the number of new cases reported has been decreasing.

Tuesday was the ninth day in a row with less than 1,000 new coronavirus cases reported in Pennsylvania. There’s also been a huge increase in testing.

“We consider this a very positive trend,” Levine said at a press conference. “I think that we have been successful in terms of continuing to bend, straighten that curve.”