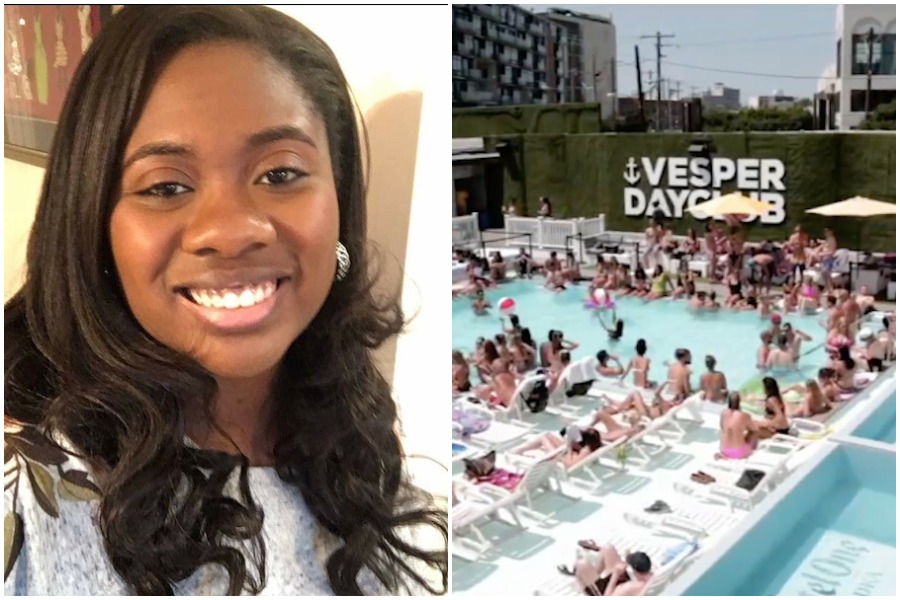 The members-only Vesper swim club in Northern Liberties has reopened after the normal beginning of its season was delayed due to the COVID-19 shutdown in Philadelphia. And with that reopening comes this: a lawsuit alleging that the swim club discriminates against Black applicants.

Now, if you belong to a swim club in the Philadelphia area, chances are it’s not quite like the Vesper swim club. The Vesper is Philadelphia’s only 21-and-up swimming pool. It’s not about laps and perfecting your backstroke. The Vesper is more geared toward drinking, ogling, and the potential for post-pool hookups.

This 2019 “FYI Philly” segment from 6 ABC does a pretty good job of capturing the scene at the Vesper swim club, formerly known as Monarch (which had its own problems):

One thing you may notice about that segment is, well, the crowd is really, really white. And in her federal lawsuit, Mount Airy resident Raina Stewart says this lack of diversity is intentional.

Stewart’s lawsuit points out that the Vesper swim club’s online application requires very little information other than links to a prospective member’s social media profile, which would, presumably, contain photos of the candidate.

The suit argues that Stewart’s experiences with the club “were demonstrative of systematic, intentional, and knowing racial discrimination against” Black membership.

Stewart also cites photographs on Vesper’s website and social media accounts, which feature “entirely non-Black membership and/or participation within the facilities. … These photographs were aimed at advertising for a specific type of culture, with non-Black participation.”

The suit, which seeks unspecified damages, also mentions social media posts that have accused the club of racism in the past. The allegations of racism also pop up on the Vesper’s Yelp page.

“In the midst of what we hope is only the beginning of our society’s ongoing acceptance of all types of races and cultures, it’s disappointing to see a ‘social club’ in the heart of Philadelphia not utilizing objective criteria for access, but instead, basing entry upon observations of a person in photographs, which creates serious concerns of potential discrimination,” says Christine Burke, Stewart’s attorney. “While Ms. Stewart feels hurt by such a vetting process, she hopes to shed light on these practices which can have a discriminatory impact upon people such as her.”

The Vesper did not reply to requests for comment on this article.

Yet Another Violent Weekend in Philadelphia

The weekend saw a break from the heat and humidity that had been hanging over the city for weeks on end. Sadly, the same can’t be said about the plague of violence.

According to the Philadelphia Police Department, at least 30 people were shot in the city over the weekend. As of Monday morning, five of those people had died. On Sunday, Philadelphia police commissioner Danielle Outlaw described the surge in violence as “disturbing” and “disheartening.”

A year ago, we were all rocking out at concerts at Citizens Bank Park, Wells Fargo Center, the Fillmore, Union Transfer, etc., etc., etc. What a difference a year makes, huh?

Since we won’t be attending concerts inside any big music venues anytime soon, the folks in the concert industry have something new they want you to try: the drive-in concert. It is what it sounds like: a concert for which you sit in your car. Like a drive-in movie. But with a band. And no movie. Yes, you listen on your FM radio.