Is It Just Me, or Do the Philly Feds Really Hate Larry Krasner?

Our U.S. Attorney took Krasner to task (again) on Thursday for the way he’s handled serious crimes in the city. 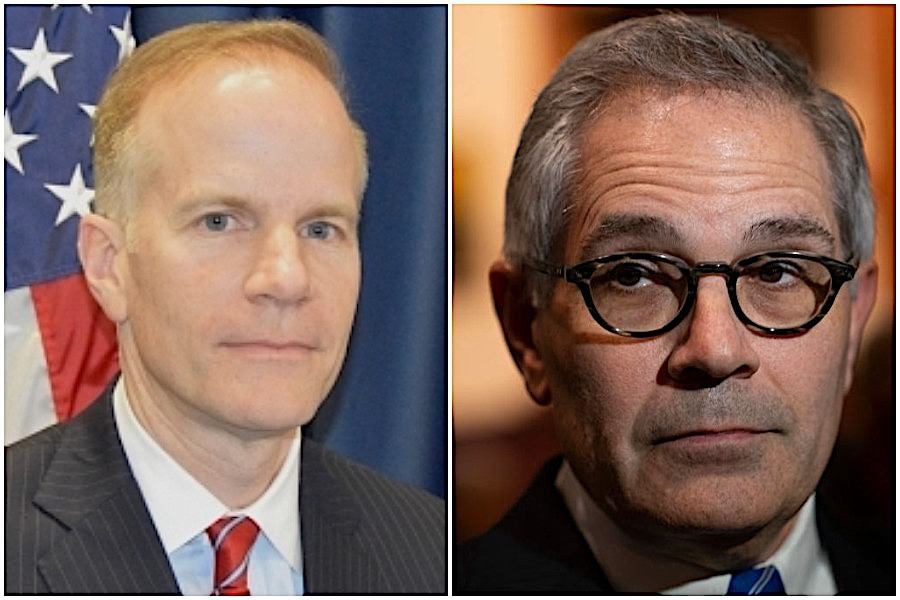 I’m pretty sure that United States Attorney for the Eastern District of Pennsylvania (a.k.a. the lead federal prosecutor in Philly) William McSwain has cemented himself as the official archnemesis of Philadelphia District Attorney Larry Krasner.

I can just imagine McSwain, a very law-and-order Donald Trump appointee, having an aneurysm pretty much every time Krasner — who is viewed by many (especially McSwain) as being soft on crime — makes a decision or takes to the podium.

And although Krasner has tried his best to act like he doesn’t have time for McSwain’s critiques, I’m willing to bet that McSwain pops up in the weird COVID-era dreams/nightmares Krasner is having along with the rest of us.

After many instances of publicly calling out Krasner’s office, McSwain did so once again on Thursday. Go down memory lane for a moment with me to 2018, when Krasner, in a hugely controversial decision that had even some “progressives” scratching their heads, dropped attempted murder charges against a man who shot a West Philly deli owner with an AK-47 in an attempted robbery. The assault confined the deli owner, an immigrant from Cambodia, to a wheelchair for the remainder of his life. The shooter, Jovaun Patterson, wound up with a sentence of less than four years in jail.

Seeing this as a huge injustice, McSwain swooped in and arrested the shooter on federal charges. And on Thursday, McSwain announced that the shooter was sentenced to more than 14 years in federal prison for the crime.

“Mr. Patterson has been held accountable for his violent criminal behavior and will now serve an appropriate sentence,” said McSwain on Thursday. “This was only possible because the U.S. Attorney’s Office stepped in and charged Mr. Patterson after the local authorities had bent over backwards to give him a break, negotiating an overly lenient sentence that sent a message that violent crime has little consequences.”

And then McSwain ripped into Krasner and other municipal leaders over the alarming violent trend in Philadelphia of late. Here’s part of what he had to say:

This is … infuriating. There is nothing more important than the safety of children. But where is the sense of outrage, where is the anger, where is the sense of urgency among City leaders? This slaughter in our streets has largely been met with indifference, a sense of inevitability, even a shrug of the shoulders. Or as the District Attorney frequently puts it: “poverty equals bullets.”

“Poverty equals bullets.” That condescending statement is a slap in the face to every law-abiding, low-income resident in the City. There are scores of low-income people in the City who respect the law, never shoot anybody, love their neighbors, and work hard to improve their neighborhood. Poverty is never an excuse for violent crime, and certainly not for murder. There is no possible justification for walking up to somebody and shooting them. Furthermore, poverty isn’t going away overnight. As law enforcement leaders, we can’t put the violence problem at the doorstep of poverty and just leave it there. That is the equivalent of abandoning the people we are sworn to protect and serve.

I asked Krasner for a comment about McSwain’s remarks but received none. Something tells me this isn’t the last we’ve heard in the battle between these two powerful men.

The Mail-In Voting Scenario In Pennsylvania and New Jersey

Who would have thought that anything having to do with the United States Postal Service would be a story that we can’t stop talking about? Well, it’s 2020. Everything is pretty much screwed. And politicians are fighting over mail-in ballots for the upcoming election ad nauseam.

As it stands right now in Pennsylvania, mail-in ballots are only to be counted if they’re received by the time polls close (that’s 8 p.m.) on Election Day, November 3rd. But due to dreadful problems with mail delivery these days and also a late deadline for people to apply for (and then wait to receive) their ballots, Governor Wolf has asked the Pennsylvania Supreme Court to allow the state to count the mail-in votes until 8 p.m. on November 6th, assuming that the mail-in ballots are postmarked by the close of polls on November 3rd. Wolf (and the rest of us) awaits that decision.

Meanwhile, over the bridge in New Jersey, Governor Phil Murphy has decided the state will send out mail-in ballots to literally every voter there. No one needs to apply for a ballot. One will just show up in the mail. Hopefully.

All of which is to say, if we actually know for a fact who will be president by Thanksgiving, I’ll be more shocked than if all of the trash and recycling in Philadelphia gets picked up on schedule next week.

If Your Car Is “Courtesy Towed” By Philly Police, Beware …

If you ever park your car in the city, you no doubt have horror stories about parking tickets, getting towed, etc.

But one Philly lawyer’s story might be better than yours. It starts with her car receiving a “courtesy tow” by the Philly police because of tree work on the block where it was parked. It ends with her being surrounded months later by police in Long Beach Island, of all places, and ordered out of her car at gunpoint. Yikes!