The Germantown bookstore, a Best of Philly winner this year, reopened this week for the first time since March. 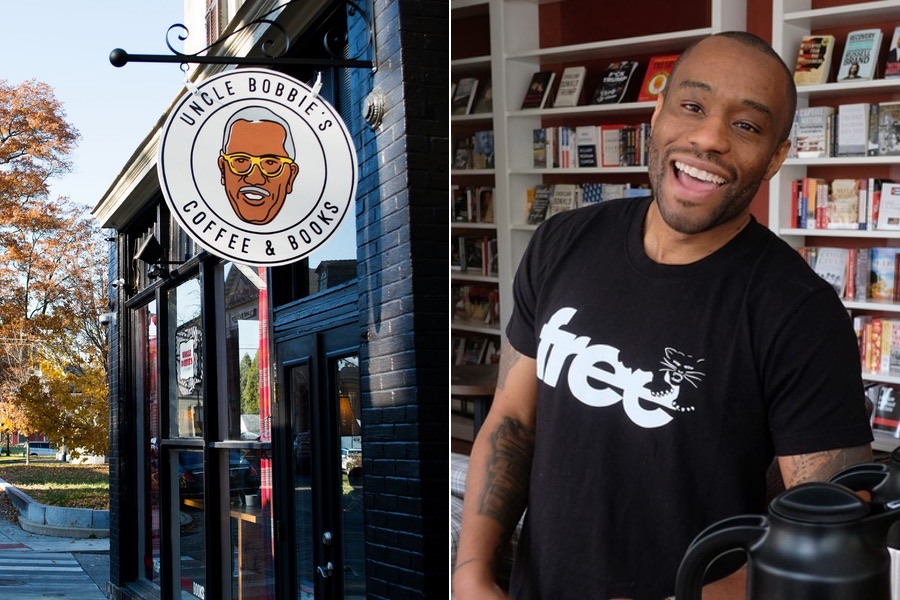 Germantown bookstore Uncle Bobbie’s reopened for business this week for the first time since March. Photos courtesy of Uncle Bobbie’s.

Uncle Bobbie’s is one of the best bookstores in the city. We know this because we decreed it so just this year in our annual Best of Philly list.

Unfortunately, like most businesses, the store has been closed since March. Owner Marc Lamont Hill, who’s also a professor of media studies at Temple, has tried to think digitally in the meantime. One example: He started a literary podcast called Coffee and Books, which is about coffee and books. (But mostly books.) Ultimately, though, when you’re in the business of in-person book browsing, as Uncle Bobbie’s is, there’s only so much replicating you can do.

These are important times for bookstores, in part because the pandemic has cleared tons of space in our collective schedules, amping up demand as everyone collectively comes to the realization that there is no reason not to take the plunge and buy that Great American Novel we’ve been coveting but were too daunted to read. Just as important, books about racial injustice are springing to the top of the bestseller lists following the nationwide Black Lives Matter protests. A bookseller like Uncle Bobbie’s, with its focus on Black writers and thinkers, becomes an even more important library of knowledge.

Which is why we were happy to hear that the shop opened back up for the first time in months on Monday, even after an additional recent road bump: two burglaries in the span of a week. We caught up with Hill to talk about what’s changed in the book business, the birth of the anti-racist reading list, and what he’s reading today.

Uncle Bobbie’s reopened on Tuesday for the first time in five months. What were you doing in the meantime?

I’ve been working to keep the shop engaged — helping the shop engage the community. Although we were closed in terms of the brick and mortar store, we still put on live book events, I still did book talks and Q&As on Instagram and other social media platforms, and we still sold books online. So there was never a time to stop. And of course I’m a writer myself, and this crazy year has given everybody something to write about.

The shop raised nearly $85,000 on GoFundMe. Would you have been able to reopen if not for that?

The generous support we got from the community, and really from people all around the world, meant everything to us. It allowed us to provide financial relief to our staff, it allowed us to pay down debt and pay off our vendors. Would we have been able to open without it? Perhaps. But a whole lot of people would have suffered.

When did donations start coming through? I’m curious if the George Floyd protests prompted a big uptick in donations.

When we made the GoFundMe at the end of March, we got a lot of support. Then when the uprisings began after the killing of George Floyd, two things happened: We saw more donations to our GoFundMe. But we also sold a lot of books. Suddenly, everyone wanted to know about race, state violence and social justice. On our online book platform, we sold more books in a month than we had in a whole quarter. And the third wave of donations was after our store was burglarized.

Obviously we’re in the midst of a big national reckoning and conversation about police violence and race in this country right now. What do you see as the role of the bookstore in a moment like this?

The more information people have, the better prepared they are to make good decisions, to understand the moment they’re in, and to participate in a democratic society. The bookstore helps make that happen. Independent bookstores are also community hubs, and at a moment where our entire lives have been disrupted, when we’ve been so isolated from one another, having a space to come back to that feels like home, that reflects our values and the best of our traditions, is a welcome addition to our day-to-day life.

What was your reaction when book sales on race-related topics started shooting through the roof? The critic Lauren Michele Jackson wrote an interesting essay that was suspicious of the idea of the so-called anti-racist reading list. Her reasoning was that if you’re just realizing anti-racism is something that needs to be thought about now, then you weren’t paying attention. And secondly, she makes the point that to put Black writers on these reading lists is to sort of implicitly suggest that Black writers exist to write about race for white people’s education.

I was pleasantly surprised by the number of books on race that were being purchased. And I was genuinely excited to see a wider range of people trying to come to terms with some of those fundamental issues that our country wrestles with. So in that way, it was a good start. But like many, I was also concerned that we would reduce racial justice, or social justice more broadly, to a hashtag, or to a book, or to a checklist of things that you do. It’s not enough for white people to vow that they’re anti-racist. It’s about doing the work. And sometimes people will think that a single action is the work. That voting for Obama, or buying White Fragility, is the answer, when in fact these gestures have to be part of a pattern of action and a cultural shift.

And as a bookseller, and someone who studies books for a living, I don’t want the idea of the Black author to be reducible to translating, speaking to, soothing, or even challenging, white liberal America. We have a lot of things that we talk, think and dream about. The range of our literary possibilities is vast. Sometimes people can think now, as they always have, that to be a Black writer is to write about race. And while race will inform much of our work, sometimes we just want to write.

You interviewed the author of White Fragility on your podcast recently. Some people have scoffed at the popularity of that book, from the standpoint of — here’s a moment where lots of white people are starting to think and read about race in a way they maybe haven’t before, and the book that many are turning to is written by a white woman, instead of the many good books on race that have been written by Black people. What do you think about that?

There is certainly a sad irony to see white people profiting off of teaching about the evils of white supremacy, at the expense of Black authors. But I think Robin DiAngelo’s book is important. And unfortunately there are many white people who won’t listen to the same insights from a Black person. And so there is a sad kind of necessity in white authors talking about this stuff. At the same time, white scholars of race, or white writers about race, have to understand the conceptual debt they owe Black thinkers. These ideas didn’t come out of nowhere — they came from Black people who have spent hundreds of years thinking about race, and thinking about racial identity and racial formation. But they also have to think about the debt that they owe. That debt isn’t paid by writing a book on race. If you make a million dollars writing a book about white supremacy and you’re white, where are you putting that million dollars? What portion of that money goes to organizations and communities that are catching hell because of structural racism and white supremacy? That’s the question.

You mentioned the two break-ins that had happened in the last couple weeks — you had bricks thrown through the windows. Now, I know this wasn’t an example of looting, but there are at least some parallels, insofar as you’re a community, Black-owned business that was robbed, which did happen in parts of the city during the protests. I’m curious from your perspective as a leftist academic, but also as a business owner: How you come down on the question of looting? Is it utterly condemnable, or is it defensible?

I think that resistance to oppressive institutions is necessary. We all look for, prioritize and appreciate nonviolent responses. But when you’re up against a violent state, and you’re up against a state that ignores your cries for justice, sometimes you have to scream to be heard. People all around this country over the last few months have screamed to be heard. And I support that. I think we should be thoughtful and strategic about what your actions look like. I don’t think you should be tearing down people’s businesses in your own community, I don’t think you should be doing harm to people, I don’t think you should be physically hurting people. But I don’t think that every sign that gets torn down, or every window that gets busted, is a sign of disorder or irresponsibility. Sometimes it’s a way of scarring public tissue — of putting a spotlight on forms of social misery and injustice that have gone ignored by the general public. And to that extent I’m supportive. I would never make a blanket statement supporting violence. But I also think it would be irresponsible and self-defeating to ignore the value, historically, that it has played.

But what happens when you get looted?

Right. A lot people who make that argument don’t own businesses. I wondered if that modulated your perspective.

Not at all. Here’s the thing: If Uncle Bobbie’s got trashed by looting during the uprisings, I mean, I would have been frustrated by the lack of strategy — since we’re one of the only businesses in this neighborhood that practices this kind of politics and action, I think it would be unwise. But I wouldn’t have faulted or blamed people for the impulse. Now, what happened to us a week ago wasn’t political resistance. It was someone who took a brick to the window and stole money out of our cash register. That’s a different thing.

Let’s go back to the idea of the reading list. What books are you turning to in order to help you think about this moment, and why?

I am turning to Eddie Glaude’s Begin Again, a book about James Baldwin and how Baldwin helps us think about the current moment we’re in. I am reading Keeanga-Yamahtta Taylor’s new book Race for Profit as well, which is about Black urban housing. I’m reading Barbara Ransby’s book Making All Black Lives Matter, which forces us to think not just about race, but these other identity categories, and how they play into Black social movements. So how do we have a social justice movement that thinks about what it means to be Black, but also thinks about what it means to be queer and trans and disabled and undocumented, and all these other social categories. And I’m reading Michael Eric Dyson’s Tears We Cannot Stop, which is a letter to white America, but it’s also about a deeper reckoning with race in America.

Sounds like you’ve got a lot on your plate.