A Eulogy for the Broad and Walnut Street Wawa

The store represented Wawa's grand return to Center City in 2015. Does its closing portend doom for our downtown? 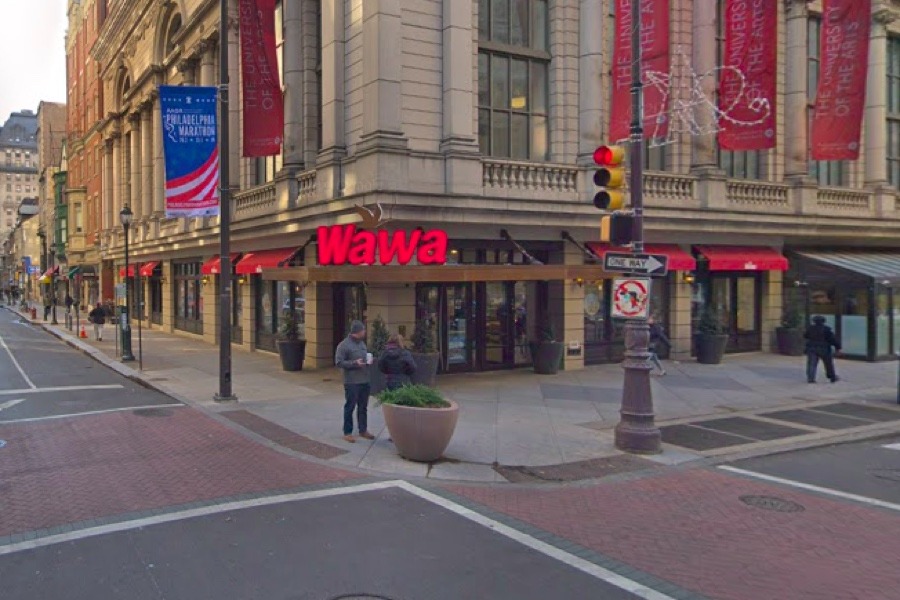 The Wawa on the corner of Broad and Walnut streets is closing. May she rest in peace. Photo via Google Maps.

There were many reasons why the crowd chose to descend upon Broad Street that night, after the Eagles’ Super Bowl victory, in one of the city’s rare, and greatest, moments of collective pride. Broad Street is, after all, the city’s longest thoroughfare, its central artery. It might have been physically impossible for the whole city to be together at once — but to be stretched in a euphoric line along the same street was the next best thing. And of course there was the glorious illuminated totem of City Hall, with its own magnetic pull on the crowd. But I submit that there was one stretch of Broad Street in particular, at the corner of Walnut, that was the true fulcrum of the celebration. People were drawn there for a deep, atavistic reason, one that nobody could articulate in the moment. There was a store on that corner, a sign glinting red in the night, beckoning — promising deliverance. Why was the crowd here? Because it was Wawa. Because it was Philadelphia.

Maybe it was even preordained:

If it was preordained, then so was the end result:

Thousands of Philadelphians gather outside of a WaWa to celebrate an @Eagles championship.

Look at the way that sign lights up the night like a beacon casting up through the galaxy in search of hungry alien life. It’s an image worthy of a Raphael fresco. Philadelphia is an old, storied city, but if there’s one image that captures the city’s psyche, its multitudes and attitudes and vicissitudes, I believe it to be that one.

Which makes it all the more sad that the big red light is now shut off for good. Wawa announced on Monday that the Broad and Walnut location is closing — a casualty of coronavirus. “Due to the impact from the pandemic coupled with some operational uncertainties of today, our long-term plans for this store are no longer viable,” reads a statement from management.

It’s hard to believe that the Broad and Walnut Wawa was only five years old. The store first opened in 2015, and it immediately sought clientele in high places. (Wawa rushed to finish the store before the the Pope’s visit and had dreams of serving hoagies to His Holiness.) Mayor Michael Nutter attended the opening ceremony and received a commemorative Wawa-branded milk bottle. Musicians from the Philadelphia Orchestra performed. Nutter could barely contain his excitement. “This has been the most auspicious opening of any store that I’ve ever participated in,” he said.

The opening of this particular Wawa — the company’s new flagship at the time — was indeed auspicious. It represented the company’s return to Center City, after closing up numerous downtown locations in the mid-2000s, abandoning the bustle of Philly for the suburbs. According to the Inquirer, this was the first new store to open in Center City in decades.

Looking back on it now, the history of Wawa in Center City maps quite neatly to the recent historical peaks and valleys of Center City itself. There’s Wawa fleeing in the aughts, when downtown was making a comeback but was by no means a sure thing. Then there’s the return with its flashy flagship in 2015. The revitalization of Center City was long complete by then. But it still lacked that crown jewel signifying its ascent. Wawa.

The choice of location mattered. This was Wawa planting its flag straight into the core of Philadelphia — Broad and Walnut, making neighbors of the city’s icons: City Hall, the Union League, the Bellevue. You got the feeling that Wawa dreamed of adding itself to that list one day.

The intersection of Broad and Walnut did bring with it other sources of controversy. People complained, including in this publication, of the homeless people who tended to hang out by the store. Wawa CEO Chris Gheysens responded with a righteous denunciation of that criticism. Suffice it to say that the critique that Wawa attracts homeless people has always been unsympathetic and unconvincing. What’s important to remember is the fact that Wawa had chosen the city — with all of its attendant benefits and challenges — for its flagship store.

And look how things have changed in just five years. These days, you can barely walk a block before bounding headfirst into another Center City Wawa. There are so many they’ve started to evolve into their own taxonomic categories: glitzy Wawas, tiny Wawas, regular-ass Wawas. (In Bucks County, there are even plans for a drive-thru Wawa.) To some in the city, they’re practically becoming an invasive species.

So it’s not as if the closing of the Broad and Walnut Wawa spells the end of history. But if the chain’s fortunes are intertwined with those of the city, then it’s hard not to feel a twinge of fear. Philly has already seen a discomforting surge of closures due to the pandemic. (In New York City, for comparison, one-third of small businesses could close up shop for good.) In all likelihood there will be more to come here, too. One feels a sneaking sense that Wawa may have been ahead of the curve. Hopefully we’re wrong.