Like You, Ed Rendell Hates the Wawa at Broad and Walnut

The ex-gov is fed up with the panhandlers at Philly’s favorite convenience store. The company and the city say they’re working on it. 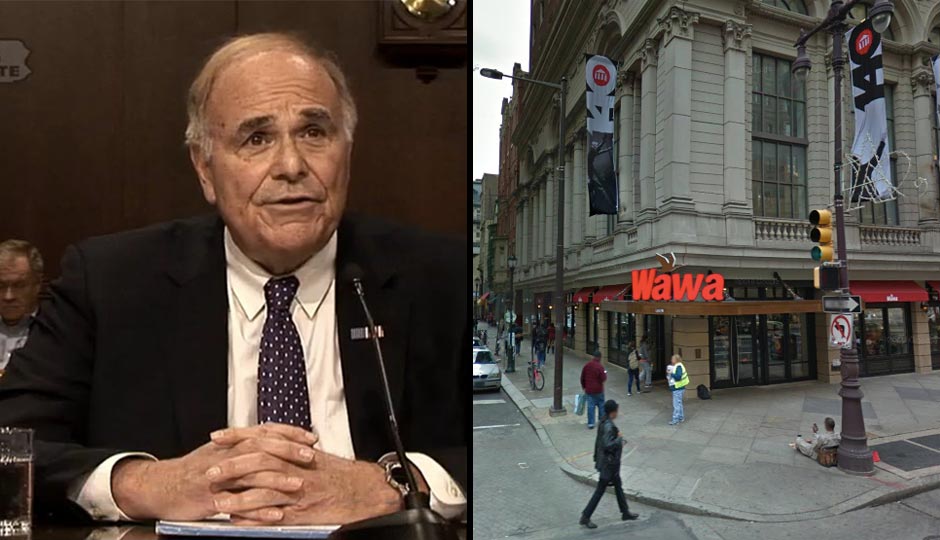 On my morning walks to Philly Mag’s offices on Washington Square I trek northbound across Center City, occasionally taking Broad Street up to Walnut and navigating construction zones until I’m steered back onto the sidewalk by the Wawa. That’s typically when I’m hit with a waft of what I assume can only be a mix of spilled Turkey Hill iced teas, trash can juice, and urine. Oh yes, it’s a lovely start to the day.

Count me among the many who were excited about the potential of a Wawa at Broad and Walnut when it first opened. But today, as I’m incessantly harassed by a regular crew of panhandlers drawn to the free bathrooms and 24-hour foot traffic of Philly’s favorite convenience store, I don’t know anymore — it’s not as bad a look as the old Forum on Market Street, but it’s close. And you know who’s with me on this? Ex-mayor and ex-governor Ed Rendell.

“When the Wawa first opened we were very excited — the food is awesome and relatively cheap, too,” Rendell tells Philly Mag. “But now I know a lot of people have said to me that they are bothered by it. It’s pretty difficult to order with so many people hitting you up for money so aggressively.”

According to Rendell, Philly had this same problem with homeless panhandlers when he was mayor (from 1992 to 2000), and the solution then was to simply stay on top of it. “It’s a difficult issue that we’ve got to solve,” he says. “You can’t just have sweeps for a few days. The mayor is aware of it; he’s trying to do something about it in the most humane fashion. Mayor Kenney is certainly right when he says not to give to individuals, [but to] give to groups.”

Rendell shared a story about a time when he was mayor and a homeless man approached him on the street asking for money: He took the man to McDonalds, bought him a meal, and told him that the place was hiring for positions paying minimum wage. The man replied that he makes more than that on the street, where he gladly returned. “Sometimes when you offer an individual food instead of money, you can just see the disappointment on their face,” Rendell says.

Addiction and homelessness are nothing to scoff at, so please don’t take me as some blackhearted misanthrope. These people need help although many often deny it — like that man in Rendell’s story — and end up in front of places like Wawa. There are homeless people out there who actually want to be on the street. What can we as a society do?

The (current) mayor’s office had this to say in response to the dilemma:

“Overall, while the opioid crisis has definitely made homelessness and panhandling more visible, Philadelphia still has the lowest street homeless rate among the five largest cities. The City funds an extensive system that provides emergency, temporary and permanent housing for individuals and families that are experiencing homelessness. And in the Mayor’s latest budget, we funded 83 new permanent housing units for individuals and families to exit homelessness. So it’s a difficult issue, but we are working on it.

We remind Philadelphians that panhandling is an economic activity, which means as long as panhandlers make money they will continue to panhandle. So rather than give to panhandlers, we encourage them to text to give, so the City can provide services that will ultimately reduce panhandling. Unfortunately, there’s more demand than we have resources right now, so these contributions really make a difference.”

Under the city’s text to give program, residents can text the word “Share” to 800-77 and be asked to contribute $5 to the mayor’s fund to end homelessness. Additionally, the city also deploys outreach workers 24/7 in an effort to better engage the homeless and inform them of city-run programs and services like shelters and mental health and substance abuse treatment. But is that approach enough to take care of the problem of people hanging around on the streets?

“We work closely with Wawa, and our outreach teams are engaging the homeless in that area every day,” Alicia Taylor, communications director for Philadelphia’s Health and Human Services Department, tells Philly Mag. “Again, panhandling isn’t illegal, but we are aware of the situation — that is why we started our text to share campaign, which we hope would deter people from giving to panhandlers directly and instead steer that money to us to provide much needed services to those in need.”

A spokesman for Wawa said the company “is always committed to being a good neighbor and is an active participant and engaged with city coalitions focused on bringing together government officials, law enforcement, homeless service providers and advocates and the business community in order to improve conditions on our streets. These are challenging complex issues, but we are committed to being part of the solution.”