But one board member is publicly calling for Alonso's resignation after her appearance at a counter demonstration to a Black Lives Matter protest in Delco. 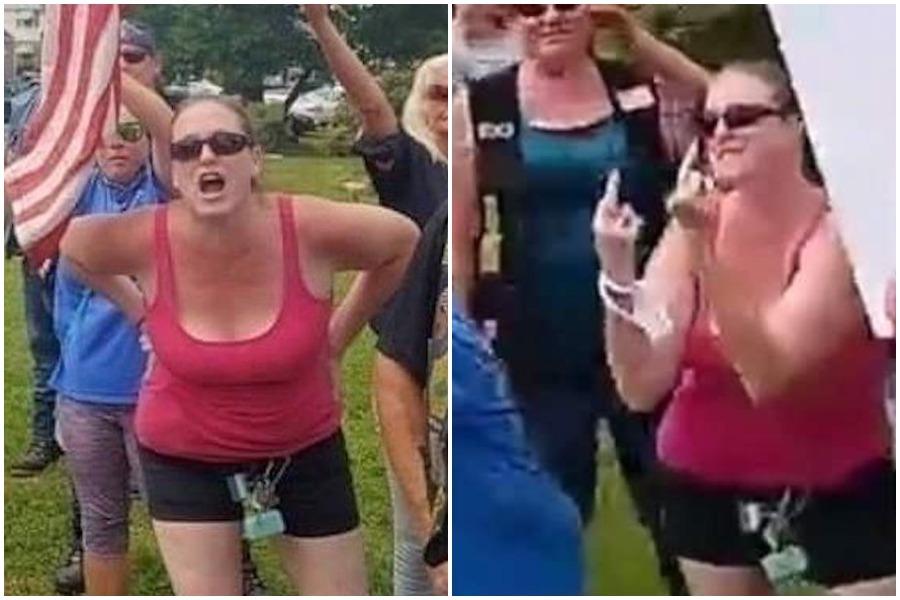 Interboro School District board treasurer Christine Alonso at a Black Lives Matter protest in Ridley on Saturday (image via Change.org)

Interboro School District board treasurer Christine Alonso has quickly become the talk of the town, er, county in Delco. But not in a good way.

Specifically, Alonso allegedly used racial slurs, which she has denied. Photos show her screaming at the Black Lives Matter protesters as well as giving them two very Delco middle fingers.

Then on Monday afternoon, the Interboro School District board issued a response to the calls for Alonso’s removal, pointing out that she enjoys the same First Amendment rights as the rest of us and going on to explain that there are “no provisions in the school code” that would allow board members to remove or discipline another member of the board.

Here’s that letter in full:

Interboro School District B… by Victor Fiorillo on Scribd

Interestingly, board vice president Justin Shivone signed that letter but then promptly took to Facebook and publicly called for Alonso to resign. Here’s what he had to say:

The behavior and vulgarity by some of the counter protesters over the weekend was abhorrent and opposite of everything I believe in both personally and professionally. I don’t speak on behalf of the board, I am just one individual of nine. I do not condone violent protests or racism. Everything I believe in and advocate for is compassion, collaboration and bringing people together for a common cause.

We all have the freedom to express ourselves in this country, I do not deny that fact. But I believe public servants are held to a higher standard. I love serving on the Interboro School Board because I have an opportunity to advocate for what’s right for our students and community. That is why I am calling for the resignation of the board member that responded to peaceful protesters with gestures that are unbecoming of an elected official.

As a member of the Interboro Board of School Directors I will continue to advocate for the best interest of all students and my constituents.

On Tuesday morning, I asked Alonso if she plans to resign. She wouldn’t say, but she told me that she expects to release some form of a statement in the next day or two. Meanwhile, a Change.org petition in support of Alonso bears under 100 signatures.

A Wave of Reopenings In Philly

Though some think that it’s best to keep our R&R activities limited to the outdoors, there have recently been a number of reopenings of museums in Philly. And more are on the way.

The Barnes Museum, the Academy of Natural Sciences, the Franklin Institute, and the Mutter and Penn museums have all reopened. Of course, there are lots and lots of preventative measures in place.

The Constitution Center is scheduled to reopen on Wednesday. Then Eastern State Penitentiary on August 14th. September will likely see the return of the Philadelphia Museum of Art, the Museum of the American Revolution and, er, the Please Touch Museum. It’ll be curious to see how a museum where touching things is the whole point deals with reopening in the middle of a pandemic.

The Inquirer has a comprehensive list of reopenings here.

When I wrote last week about Philly’s record breaking homicide numbers, I was really hoping to have some good news to report this week. Sadly, that’s not the case.

As of Monday night at 11:59 p.m., we’ve had 257 murders in the city, a 34 percent increase over where we were at last year when we eventually wound up with more murders that we had in any one year for more than a decade. On top of that, we’ve now had more murders year-to-date than we had in the entirety of 2013 or 2014.

If there is any good crime news to report, it’s that crime in some categories, like rape, robbery, and residential burglary, are down significantly year-to-date when compared with last year. Hey, we’ll take what we can get.