On his new eponymous weekend show, the journalist is interviewing frontline power players and interacting with frontline protesters on the streets. 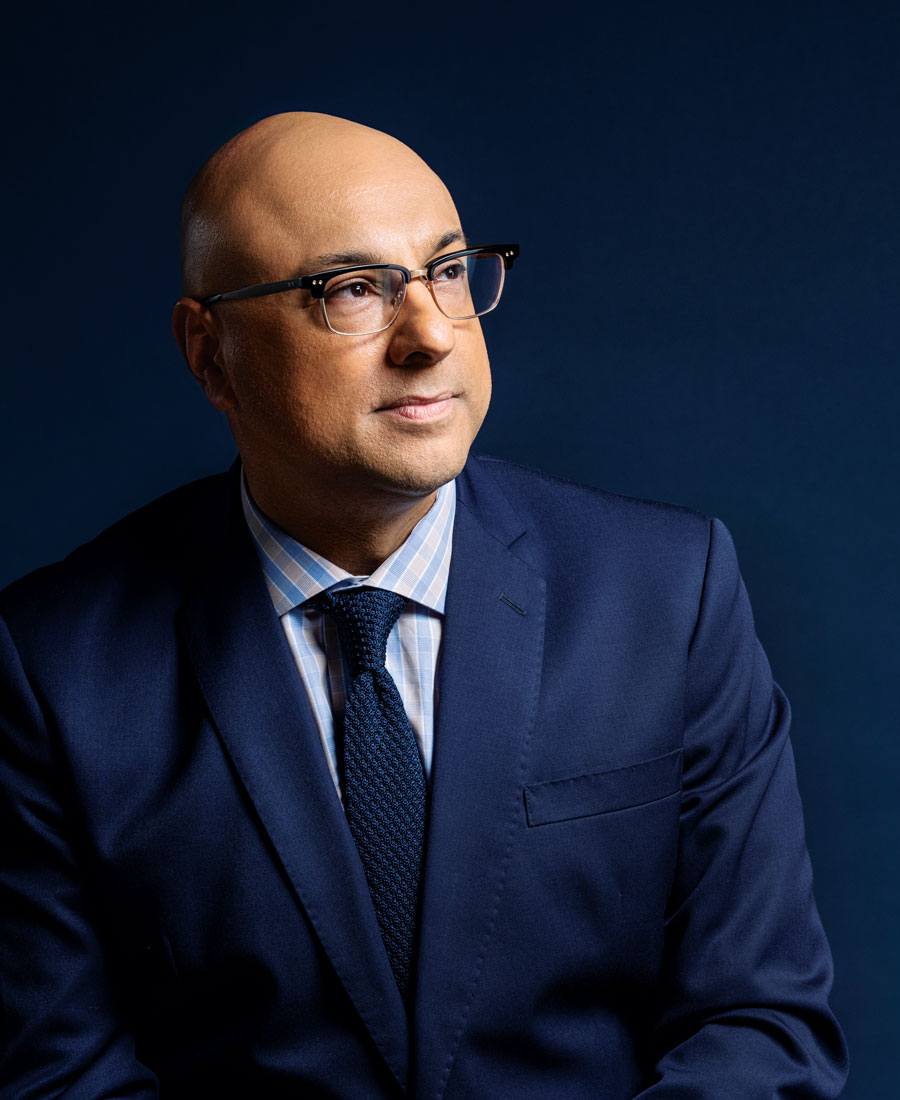 From primaries to protests to the pandemic, 2020 has been a busy year if you’re a journalist. For MSNBC host Ali Velshi — who splits his time between New York and the Main Line — it’s meant the opportunity to interview frontline power players on his new weekend show, Velshi, as well as interact with frontline protesters on the streets. Velshi, raised in Canada, talked about movements, media and politics.

The pandemic has turned everything upside down. How has it affected your world?
We’ve gotten pretty good at the work-from-home thing, which is kind of fascinating. The number of people who hosted television shows from home was very, very small, and it usually was only really big players who got to call their shots. But most people now host TV shows from their homes. The most fascinating thing is that the internet has held up. We’re all doing broadcast-quality stuff from our homes.

The greater complexity has been on the reporting side. One of the biggest challenges for media generally, and cable media in particular, is that there’s a certain kind of person that gets onto cable TV, and it’s generally because they hold some kind of office, they run some kind of company, they’ve written some kind of book. We don’t really talk to regular people as much as we should. And then a story develops that’s really all about regular people. We don’t even have established pathways to them, and nobody can go into a studio anymore. So finding them and getting them to tell stories is a little more complicated now.

You started a new weekend program earlier in the year. How are you thinking about the show?
Well, it’s changed probably 50 times since we first conceived of this toward the end of 2019. We launched, coincidentally, right in the middle of the impeachment. So the show wasn’t what we conceived it as. And then we went right into primaries. And then we went right into the pandemic. So it’s never been what we conceived it to be.

But it has dovetailed with what I wanted it to be. Because the whole point of what I’ve been doing in the past few years is a real emphasis on what I’ve been calling our broken capitalism — social justice and equity in a society that is capitalist, that is a meritocracy. Those two things should be able to co-exist. And as a person who’s a business and economics journalist, and pro-capitalist, I’ve been wanting to marry those things and say, “Why can’t this system, capitalism, which is so good, not have as by-products inequality and inefficiency and the things that we’ve seen? Why can’t we fix this problem?”

That’s got to feel good.
When we are past this, and when we are telling grandchildren or other generations about this, and they ask you, “What did you do in those times?” — you don’t want the answer to be, “I didn’t do anything. I just sort of let the whole thing wash over me. There was remarkable protest and upheaval in the streets, and it didn’t really affect me much.” Whatever the outcome is, the best place to be is — there’s a discussion. Were you in it? Yes.

When we are telling grandchildren or other generations about this, and they ask you, “What did you do in those times?” — you don’t want the answer to be, “I didn’t do anything.”

Why does this moment feel so different from what’s happened in previous decades?
I think we’ve been primed in the past 10 or 15 years to hear about inequality and injustice a little bit more. It’s become the intractable problem of our time. As a financial journalist, I thought unemployment was the intractable problem of our time. And then we got to five percent unemployment, which is supposedly full employment, and then we got below that. And yet there were still people who were struggling. I thought, how can that be? I was taught that once you get to five percent unemployment, everybody’s happy. Then you realize that it’s this inequality. The world looks like it’s doing really well. If Martians came down and said, “Show me your books, humans,” they’d say, “This looks good. You don’t have any shortage of things. You make lots of money. Everybody’s productive.” But when you break it down, you realize we’re not sharing those gains properly.

Now, where things went wrong is that a lot of people around the world knew they weren’t sharing in the spoils, but they got misdirected or pointed toward blaming refugees, immigrants, minorities, women, gays, transgender kids — [politicians] have pointed them in every direction except the one that mattered. And that is: the policy decisions, largely having to do with international trade and commerce, that have caused labor rates to stay as low as they can be. And that’s what I think is now becoming relevant. The stock market boomed, the economy was great, everything was fine — and the regular working stiff hadn’t seen material improvement. That’s why I think this thing that has just happened — the protests that started because of social injustice — is piled upon an understanding that was already there.

So you’re seeing a direct connection between the quest for racial justice and the quest for economic justice.
Absolute straight line. But I’ll say this: As an economics guy, I can always draw a straight line to economics. But what coronavirus has done is show us that we actually all can come together, and we can do heavy lifts, and we can somehow find the money to fix things. The things we actually need to fix in society will cost less than the trillions of dollars we’ve already put into coronavirus. So why not think big?

How much does being Canadian shape your point of view?
I think it shapes my point of view a lot. When you grow up in Canada, you grow up in awe of, and with a respect for, America. But you know why you’re different. There’s nothing that Canadians hate more than being told they’re like Americans. I’ve been in America for 20 years now, and I am an American citizen, and I’ve got an American family. But I still sometimes describe myself as Canadian only to say that I’ve got this built-in vantage point that allows me to be critical of this country that I have chosen to be in and that I love. It’s the vantage point of a mouse sleeping next to an elephant. If that elephant rolls over, you’re dead. So you have to know how it thinks. You have to know what motivates it. And you understand how the elephant’s motivation is different from yours as a mouse.

Do you miss Canada?
Yeah. I miss it every time some kind of weird pronouncement comes out of 1600 Pennsylvania Avenue and I think about the normalcy that is Canada. Canada is not some weirdly liberal place. It’s had good government; it’s had bad government. It’s typically not had crazy government. So Canada represents to me what I think it represents to every American who knows anything about Canada: simple normalcy.

I have that feeling, and I’ve only been to Canada twice. I miss it!
I will say that there’s an embrace of multiculturalism in Canada that I think America could do with a dose of. And there’s a real liberalism. It’s not left-wing progressive liberalism. It’s this idea that people can fulfill their ambitions and can chase their aspirations in a way that is supported to the degree necessary by government, but they’re left to their own devices to the degree necessary.

There’s a great distrust of the media these days. Do you ever think about what’s underneath that?
I think there are two issues. There’s this elitist thing. The media has been a club or a fraternity and has behaved like that for decades. We’ve seen it in #MeToo. We’ve seen it in the way we’ve covered stories. So I think a lot of the world is angry at that: You guys aren’t really telling everybody’s stories. You’re not the voice of the voiceless. You’re the voice of the people like you who’ve gone to the fancy schools you’ve gone to and live in New York or major centers. Number two, I think there’s all sorts of stuff to fuel that fire. There’s all sorts of people telling you on a regular basis — and a lot of it’s based in nonsense or conspiracy theory — “Here’s what they’re not telling you.” You can consume a steady diet of B.S., and it’s available. Alex Jones is as easy to find as you are or I am. Easier. We all had that uncle at Thanksgiving who thought the media wasn’t telling the whole story. But now, that uncle has someone to rely upon to feed that mistrust.

I’m a regular MSNBC watcher, and I’ll admit: Sometimes I wonder what the point is. We all basically agree with each other. Meanwhile, there’s a whole other group of people who agree on different things and are watching a different network.
That’s not great. We should win on the strength of our argument, and the strength of the argument should be honed in debate. So I would like more of that. It’s gotten more complicated. I just want to pick people [to be on-air] based on what they think and their ability to argue that case, and I’m prepared to be on the other side of that debate. But sometimes I have viewers who don’t want to hear that debate. It’s not red-meaty enough for them. Or sometimes the person who is there to debate me isn’t there in good faith — is pushing an ideology over an idea. It’s become fraught. So sometimes, to keep your audience happy, you avoid the things that are pitfalls, and then it starts to become same-y and very familiar. I think we always have to prod ourselves to say, “Let’s not do that.”

I never thought I’d be nostalgic for Crossfire, but occasionally, I am.
That was my first job in TV. My first internship out of college — I was an intern at Crossfire. This was a couple of iterations of Crossfire ago. It was Michael Kinsley and Pat Buchanan, mostly. And I loved it. It was always respectful conversation. They were definitely passionate. They had their views.

It’s the concept of pluralism. This is what bothers me so much. I hear from so many people who want to beat the other guys. I’m thinking — that’s not what success looks like to me. I had a conversation with Howard Schultz from Starbucks when he was running for president — kind of — and he said when he was president, he was going to gather everyone around a table with coffee, and they were all going to work out their differences. And I said, “But that’s not what we want.” We don’t want a society where we all channel ourselves into one particular perspective. You want active debate all the time. And you need to be able to sit with those people and have coffee and have dinner and let your children marry their children. That’s what society is based in — that we’re not all coming from the same perspective.

Published as “Anchorman” in the August 2020 issue of Philadelphia magazine.