The Battle Over the Frank Rizzo Statue Heads to Federal Court

If you thought that particular fight was over, think again. 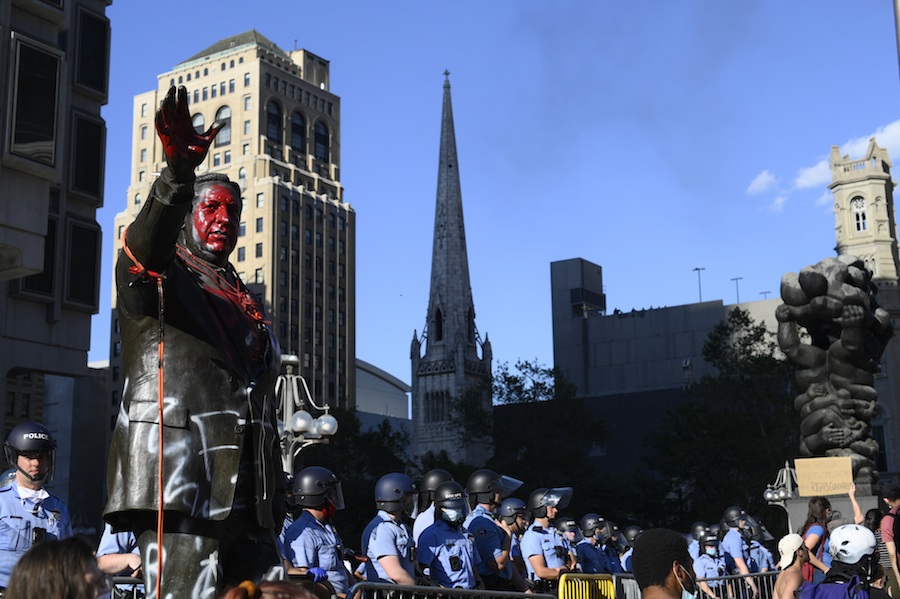 A lawsuit is brewing over the Frank Rizzo statue in Philadelphia, seen here just days before it was removed by the city. (Getty Images)

Noted Center City attorney George Bochetto filed the lawsuit on behalf of the Frank L. Rizzo Monument Committee. The defendants include the City of Philadelphia and Mayor Kenney himself. (The city does not comment on pending litigation.) The Frank L. Rizzo Monument Committee is led by Jody Della Barba, who served as Rizzo’s secretary for many years.

The suit claims that the Kenney administration’s actions have violated a 1998 agreement between the committee and the city. Bochetto also argues that the city has run afoul of Philadelphia’s Home Rule Charter by disposing of the statue without public input or the involvement of the Philadelphia Art Commission, the design review board that is set to determine the fate of South Philly’s now-boxed-up Christopher Columbus statue.

Additionally, the lawsuit asks the court to order the city to allow the committee to recover the Frank Rizzo statue from wherever the city has stashed it and seeks financial damages as well.

So I guess we’ll have this all figured out by sometime in 2021. Maybe.

Franklin Institute to Reopen Next Week

Yesterday, I told you that the Brandywine River Museum had reopened and that a suburban movie theater is reopening just in time for the Fourth of July holiday. And then I learned that the Franklin Institute is reopening next week, making it the first major Philadelphia museum to announce that it would reopen soon.

“We have been carefully preparing for reopening since the moment our doors closed on March 13, and the entire Franklin Institute is ready to welcome guests in a thoughtful and meaningful way,” said Franklin Institute president and CEO Larry Dubinski in a statement. “We are taking a careful and controlled approach to our reopening and have customized the guest experience to continue to deliver engaging science experiences while ensuring we operate safely and responsibly.”

Yes, you can still go into the big heart. Yes, the planetarium is open. There’s even a new exhibit of life-sized wax figures from Madame Tussauds. Every American president is represented in the exhibit, along with Ben Franklin, Rosa Parks, Malcolm X, and Michelle Obama.

Republican legislators in Harrisburg have been pretty damn unhappy with how Pennsylvania Governor Tom Wolf and health secretary Rachel Levine have handled this whole coronavirus shutdown business. They’ve been trying to force an end to Wolf’s disaster declaration that he made in March, claiming that the impact of that disaster declaration is unfair to small business owners.

Well, Pennsylvania’s Supreme Court weighed in on Wednesday, siding with the Wolf administration and putting the matter to rest. For now.

“The administration is pleased with the Supreme Court’s decision keeping in place the disaster proclamation to assist in the state’s response to the pandemic and to provide protections for businesses, workers, and residents,” a Wolf spokesperson said in a statement.