At Friday's rally near City Hall, a counter-protester decided to block the caravan of cars coming up Broad Street. And then one driver hit the gas. 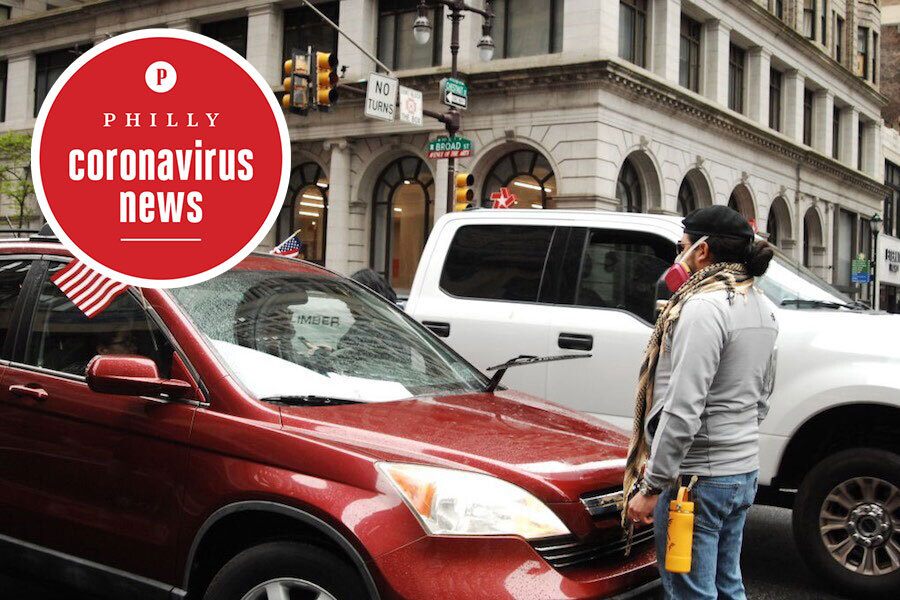 Counter-protester vs. protest car at the Reopen Philly rally on Friday near City Hall. (Getty Images)

On Friday just before noon, a caravan of cars, trucks and SUVs drove north on Broad Street. They were intent on circling City Hall with their horns blaring as part of an anti-shutdown Reopen Philly rally. But before the protesters could make it to City Hall, a counter-protester got in the way.

“I was walking along Broad Street when the caravan of cars came honking,” says the counter-protester, a South Philly resident. (He asked that we shield his identity because he is concerned for his personal safety.) “When the light at Broad and Chestnut changed, the cars stopped, and so I walked out in front of them.”

The counter-protester said that he had mostly shown up to take pictures of the rally and maybe to support a counter-protest if there turned out to be one. But when those cars stopped and he saw the signs and heard their yelling, he decided to jump into the fray.

“I’m tired of racists using this as an excuse to rally together,” he tells Philly Mag. “So I stood there, flipping them off and telling them to go eff themselves.”

A standoff ensued. The counter-protester says he’s not sure how long it lasted but thinks it could have been as many as ten minutes.

“Finally, [the driver] got frustrated and pulled forward,” the counter-protester recalls. “He hit me in the legs and kept pulling forward. Once he knocked me off my feet, I grabbed his windshield wiper. And then he drove into me again, harder. I was yelling at him to stop and slamming my fist on the hood of the car. He didn’t stop until he had dragged me across the intersection.”

And because there’s a God above us, there’s this video floating around on social media:

After getting a photo of the license plate and driver, the counter-protester filed a police report. As of Monday morning, he was waiting to speak to a detective. He wants the driver charged with hit-and-run (according to him, the driver took off before police arrived to take a report) and vehicular assault.

Meanwhile, in what can only be described as a true Philly-style coincidence, a passenger in the Reopen Philly rally car was reportedly none other than Jody Della Barba, a staunch South Philly conservative who was Frank Rizzo’s secretary for many, many years. The driver of the car is said to be a relative of hers. Jody Della Barba declined to comment, stating, “I don’t need my words twisted.” Attempts to reach the purported driver were unsuccessful.

We’ll keep you posted on how this saga unfolds.

Speaking of reopening showdowns, four Pennsylvania counties say they will begin to reopen this Friday, May 15th, whether Governor Tom Wolf says they can or not. The four counties are Schuylkill, Dauphin, and, closer to home, Lancaster and Lebanon.

Last Friday, Wolf allowed 24 Pennsylvania counties to shift from the Red Phase (the “lockdown” mode that the entire Philly region is under) to the less restrictive Yellow Phase. The four aforementioned counties intend to make that shift on their own this week.

“As elected officials from across Lancaster County, we call on you to formally move Lancaster County from the ‘red designation’ to the ‘yellow designation’ of your COVID-19 Phased Reopening Plan immediately,” reads the letter. “We, as a county, are prepared to do so on Friday, May 15, 2020. We prefer to act with your cooperation, but we intend to move forward with a plan to restore Lancaster County.”

“Too many Philadelphians struggle to keep afloat financially even in normal times,” Mayor Jim Kenney said in a statement about the new program on Sunday. “This virus simply cannot be allowed to become a terrible tipping point that leaves people hungry or without shelter. This emergency help is available now if you are someone who has had trouble applying for unemployment — or if you are waiting for your unemployment to come through. This state program is limited — both in size and duration — but I am certain that every bit of assistance can make a huge difference.”

The emergency cash assistance program offers one-time grants of $400 to $1,200 based on family size to eligible residents.

The state just opened the application portal, which will hopefully be more navigable than the unemployment portal. Residents can also apply by calling 1-833-373-5868.