Dear Philly: Mayor Kenney Hates How Trashy You’re Being During the Pandemic

Improperly tied garbage bags, trash cans without lids, and people who toss their refuse into already overflowing receptacles in public parks are among the things that drive the mayor crazy. 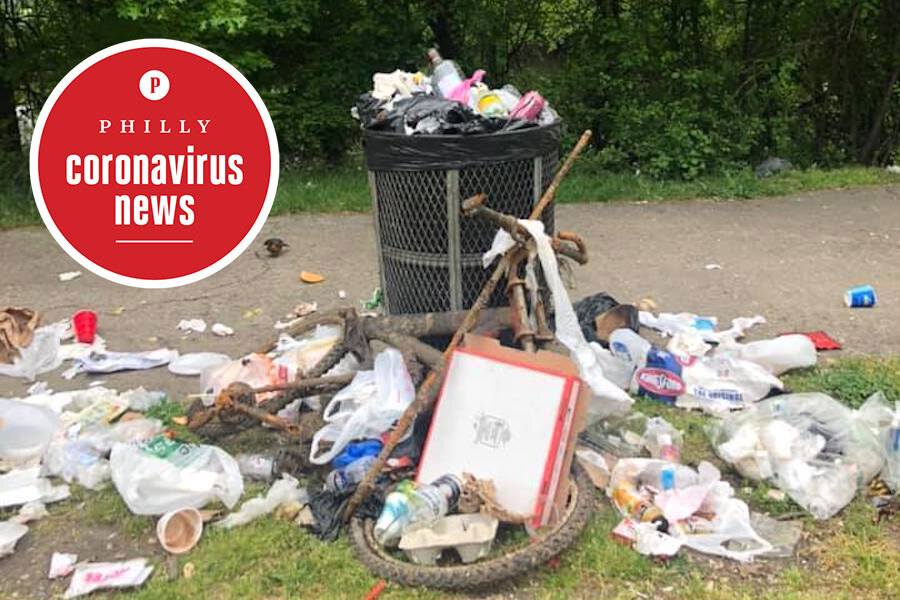 Philadelphia has always had a major trash problem. But the coronavirus seems to have really brought out our trashiest instincts. (And that’s without us even getting into the whole discarded coronavirus gloves issue, a genuinely puke-worthy achievement of human disgustingness where those germy blue gloves have taken the place of floss sticks on Philly’s sidewalks. But that’s for another article.)

It doesn’t help, of course, that recycling is now on an every-other-week schedule — something that a good third of my West Philly block can’t get through its thick skull. So those blue buckets sit out there for days and get knocked over, sending bottles of Bud Ice, unwashed cans of baked beans, and a fair helping of non-recyclables into the street.

Nor does it help that staffing issues in the Streets Department have led to delays in trash pickup. Residents have been quick to blame the city and call 311 over garbage issues.

But at a press conference on Wednesday, Philadelphia Mayor Jim Kenney didn’t hesitate pointing out that Philadelphians themselves should take a good bit of credit for how trashy the city looks.

After Philly managing director Brian Abernathy conceded that trash pickup has been one or two days late in many cases, Kenney jumped in.

“People send me videos all the time of trash day and what it looks like,” Kenney said. “I mean, you have to take some care of putting your trash out to the curb. I see people throw their trash to the curb from the front, top step. The trash is not tied up. The bag breaks open. The trash gets scattered. The recycling materials are not broken down and secured on a windy day.”

OK, so that’s household trash. But what about all those overflowing trash cans in our parks, like the one above?

“I’ve talked earlier about trash overflowing in our larger parks,” Kenney continued. “Bring a trash bag with you. Take that trash home. Don’t throw your trash out your car window. There are certain things every citizen can do to help our city stay cleaner.”

Clearly, the mayor has a lot of thoughts about trash. He wasn’t done…

“If you’re in [FDR] Park, for example, where I spend some time on a bike and you overflow trash cans, just don’t throw your trash on top of the overflowed trash can, because it’s probably going to blow away,” Kenney instructed. “It’s just more common sense. And I would treat our parks and facilities as you would treat your own home.”

Basically, the Golden Rule that we all learned as kids applies to refuse as well. Duly noted.

Here are some of the greatest hits from Jim Kenney’s Guide to Being a Decent Human Being:

If You Despise Wearing a Mask, You Won’t Like This One Bit

Pennsylvania Governor Tom Wolf has moved some Pennsylvania counties from the Red Phase to the Yellow Phase. And more counties are about to make the same shift. But Philadelphia and the surrounding area? It’s anybody’s guess.

And when we do go from Red to Yellow here, don’t think you can toss your N-95 mask, bandana or modified t-shirt into the trash. No, Philadelphia health commissioner Tom Farley said on Wednesday, masks are going to be here to stay for a good long while.

“Wearing a mask is going have to become normal, expected behavior,” said Farley. “This is what we do when we’re around other people. In the future, it’s going to have be so that going into a store without wearing a mask is like it is now to go into a store without wearing a shirt. It’s just something that people don’t do. So if you haven’t done it yet, get a mask. And get used to wearing it.”

Because you take your civic duties very seriously, surely you know that the Pennsylvania primary is now on June 2nd. It was supposed to take place on April 28th, but officials moved it thanks to the coronavirus.

Given the concerns over showing up at a polling place and touching a voting machine that others have touched before you, there’s been a big surge in applications for mail-in ballots. Something like 1.6 million applications. That’s huge. More than a tenth of the population of Pennsylvania.

Well, if you haven’t applied for a mail-in ballot, you better do so ASAP. Your county election office needs your application no later than 5 p.m. on May 26th.

Click this link for everything you need to know about applying for a mail-in ballot in Pennsylvania.

And once you get your mail-in ballot, don’t assume that it’s simple to fill out. It’s not. Fortunately, we’ve got a handy guide to filling out the surprisingly complicated ballot right here.