Who Is Leaving Flossers All Over Philly Sidewalks?

I’ve learned to tolerate Philly’s litter-happy ways. But floss picks are a bridge too far. 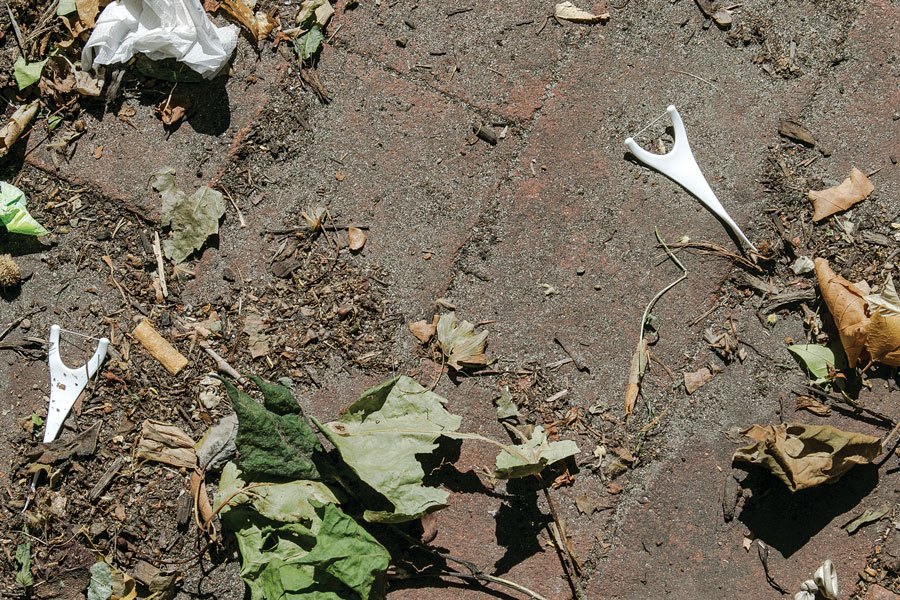 Most days, I walk 1.6 miles to work, traversing the city from one side of Broad to the other. I keep my eyes trained on the ground, because my dog-owning Graduate Hospital neighbors take care to bag up their pets’ poop … and then throw it directly on the ground. I’ve learned to be vigilant the hard way. Doing the doggy-doo slalom means I notice many other things on our streets: cool leaves, rogue etchings in sidewalk concrete (mostly lovers’ initials and crudely drawn penises), and, oh, yes, flossers. I see flossers everywhere.

A flosser or floss pick is dental care for dummies — a strand of waxed string on a tiny plastic slingshot. Theoretically, they’re easier to use than floss and, since they allow you to tackle your maw one-handed, more convenient. No mirror (or, ahem, privacy) needed. Which likely explains why they’re scattered across our streets like confetti after some toothy dental parade.

I grew up in the Philly ’burbs in the ’80s, when the nickname “Filthadelphia” was as hilariously cutting as our Garbage Pail Kids trading cards. And according to a 2015 report by Malcolm Burnley in this magazine (and my own freaking eyes), the nickname remains apt. Maybe it’s the dearth of public garbage cans or our lack of a street-sweeping culture, but detritus piles up on corners and in gutters. Over the years, that garbage has evolved — from Shorti wrappers, chicken bones, and flattened Arctic Splash cartons to all those things plus biodegradable Sweetgreen bowls, craft beer cans and plastic floss picks.

What does a flosser deluge say about a city? That we’re too harried to floss at home? That we’re eating corn on the cob with abandon? A representative from the Streets Department told me crews “have not seen an increase in the plastic flossers” but did not respond to requests to elaborate. But according to sweepers I spoke with around Center City, it’s not just me: Philly sidewalks are lousy with flossers. One guy told me he sweeps them up every day — “after use” — though he’s never actually seen anyone flossing in public.

Perplexed, I called Todd Fleischman. The Rittenhouse Square dentist told me flossing education is a crucial part of his patient visits: “We can only do so much as dentists. We need patients to play their role.” And play it they do, it seems, all over the streets of Philadelphia.

By the end of my morning walks, I’m struck by how frustratingly typical it feels for Philadelphia to turn a possible uptick in personal hygiene into a new litter meme. I’m also struck with the distinct feeling that I really should floss more.

Published as “Flossed Cause” in the July 2019 issue of Philadelphia magazine.