Christine Knapp, director of the Office of Sustainability, weighs in on how we can use this time to plan for a better future. 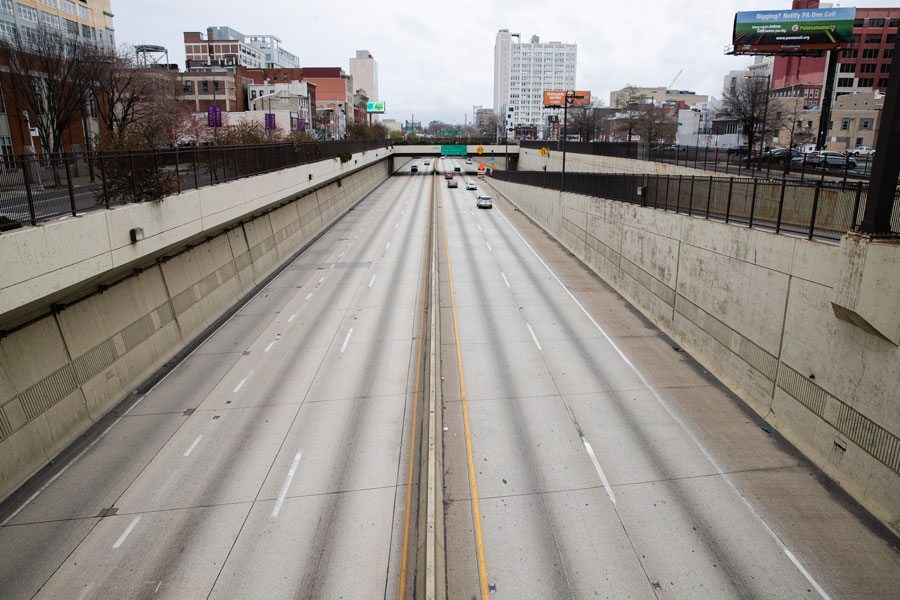 Thanks to a drop in traffic, Philadelphia air pollution has improved. Photograph by AP Photo/Matt Rourke

The shutdown of non-essential businesses and the implementation of stay-at-home orders has helped slow the spread of coronavirus around the globe. It’s also had a positive side effect: reductions in air pollution.

While photos and NASA-provided graphics have depicted these changes in major cities around the world, we wondered what kinds of changes we’re seeing locally. On Wednesday, we got an answer: The City of Philadelphia’s Department of Public Health released a report on the changes in air quality they’ve measured over the last couple of months.

In the report, the Department of Public Health explains that the shutdown has provided a “natural experiment” to see how cutting back on automobile traffic can improve air quality in the city. Relying on a network of 10 air pollution monitors, the Health Department compared air pollution levels from February 17th to March 17th against March 17th to April 17th. The results? During the shutdown, NO2 levels — or nitrogen dioxide, a gas released when fuels are burned — were down by 22 percent. The concentration of fine particulate matter  — a mix of solid particles and liquid droplets in the air — dropped by around 18 percent. And carbon monoxide was down about 25 percent.

Clearly, the lack of activity and driving in the city has greatly reduced air pollution in Philadelphia. Despite these benefits, however, the shutdown clearly can’t last forever. Eventually, the stay-at-home will be lifted and traffic will pick back up again. But Christine Knapp, director of the Office of Sustainability for the City of Philadelphia, explains that we can use this time to learn how to improve the city’s air quality in the future.

What Can a City Do About Climate Change?

“Sustainability offices around the world are all kind of putting an eye to trying to learn as much as we can during this real-time experiment that we’ve been thrust into,” says Knapp. “We can’t shut down the economy forever, right? But what can we do to keep the benefit of the air quality going?”

Knapp points to Milan, where the government is looking to reduce car use once the shutdowns are lifted by adding temporary new bike lanes, lowering the speed limits, and prioritizing the right-of-way for pedestrians and cyclists. Around the world, cities are seeing a surge in biking during the crisis, as we are here in Philadelphia.

In Philly, the city has recently invested in bike lanes — such as the Spruce and Pine Street bike lane revamp that took place last summer — and worked to redesign the bus network in response to drops in ridership. But while public transportation is typically used as a more eco-friendly way to travel compared to private vehicles, Knapp is concerned that the pandemic will have a negative effect on ridership.

“Some of the projections that public transport experts are looking at is that people may be more afraid of public spaces, as this isn’t likely to completely end at one solid point. There’s likely to be waves of resurgence, and so more single-use vehicle use may rise,” says Knapp. “So how do we counter that with more micromobility — walking, biking, scootering? I think that’s an area that we have to explore more from an infrastructure perspective, but also just from a policy perspective.”

Of course, one obvious way to keep more people off the roads is more teleworking for those who can do their jobs virtually. But Knapp says that getting more people to telework isn’t the goal. Rather, it’s to get them to their jobs with less transportation emissions.

But one of the biggest takeaways, perhaps, is how quickly people — well, most people, anyway — were willing to change their behavior in response to a crisis. While climate change is undoubtedly a crisis, the fact that it moves slower and less visibly than a pandemic can make it easier to ignore or deny. (Though, similar to a pandemic, climate change has stronger adverse effects on those already facing social inequality.)

But as a recent Harvard study demonstrates, human health and environmental health is inextricably linked: The air pollution in your environment can actually affect your ability to survive a COVID-19 infection.

“If there’s a pandemic and you’re more at risk of dying from it because you live in this area that has more air pollution than other places, I think that might drive home for people that this is real,” says Knapp. “Things like air pollution are invisible, so it’s kind of hard for people to wrap their brains around its importance sometimes. But I’m hoping that data point will help people realize why it’s important.”

While it will take some time to see the effects of the shutdown on other areas of our environment — Knapp says they only conduct a citywide greenhouse gas emission inventory every two years, and data on energy consumption is collected quarterly — the improvement in air quality is certainly telling in regards to how our actions affect our environment. And maybe, just maybe, if people can remember how willing they were to mobilize to survive a pandemic, they’ll be similarly willing to change their behavior to survive climate change.