The influential (and controversial) health expert has a few things to say about pandemics, politics, and how coronavirus might change us — for better and worse. 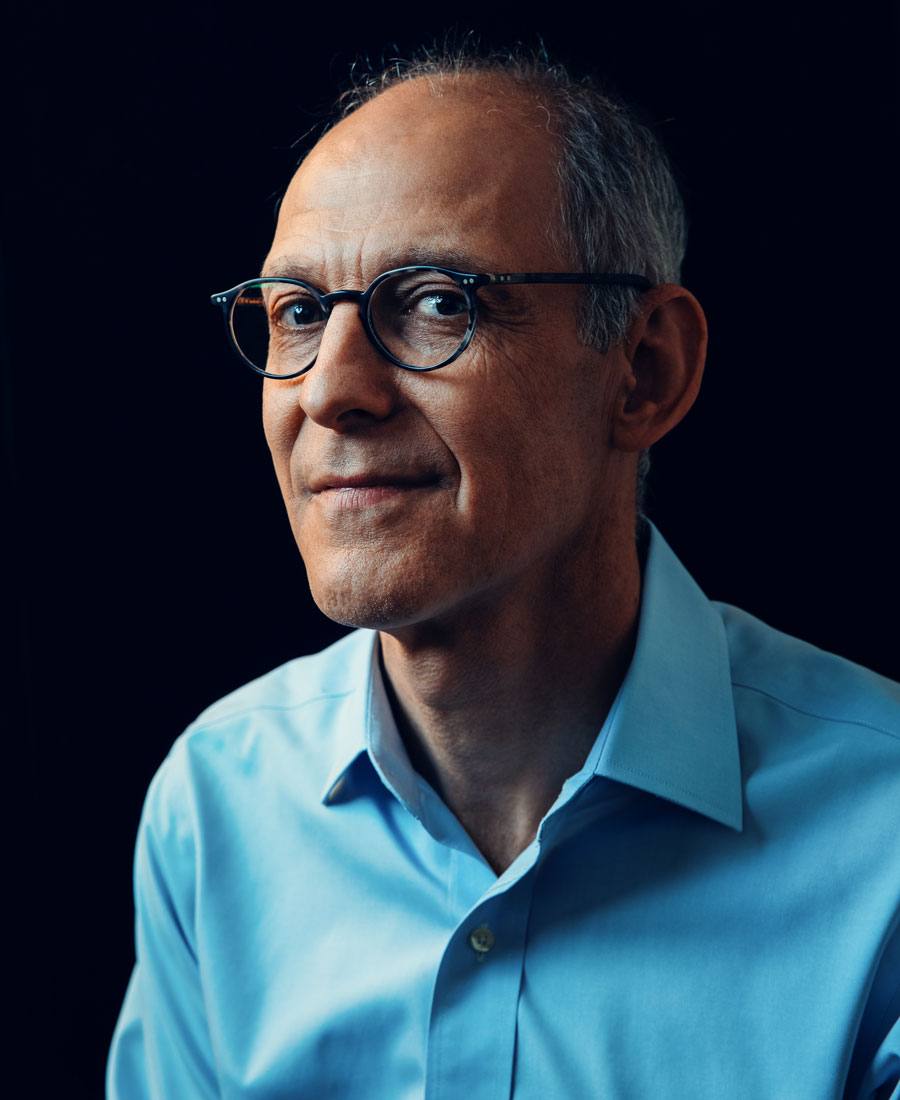 If you’ve watched much TV during the pandemic — outside of Tiger King, we mean — chances are you’ve seen Ezekiel Emanuel weighing in on what’s happening. The oncologist and professor, who holds the title of vice provost for global initiatives at Penn, is a health-care policy and ethics expert who served in the Office of Management and Budget during the Obama administration, working on everything from the Affordable Care Act to the H1N1 outbreak. The oldest of the three overachieving Emanuel brothers (Rahm was Obama’s chief of staff and mayor of Chicago; Ari is a Hollywood agent and the inspiration for a character on Entourage), Emanuel talked on the phone about pandemics, politics, and how coronavirus might change us.

I’m curious how and when you first became aware of coronavirus and what your initial thoughts were about the threat it posed.
[Laughs] You’re outing me. It was in January that we became aware of it. And I would say, like many people, I did not anticipate it would become this important and overwhelming. I thought we might get a sort of flu-like situation. In my ignorance, I didn’t think this was going to be the Big One. And I thought our system could respond faster and better to it, I guess. And so I think I underestimated its impact.

Towards the middle of February, I became much more preoccupied and concerned. I wrote some stuff that got circulated at the highest levels of government. It got somewhat picked up, but not really. And I talked to the highest levels in early March about a nationwide lockdown.

What kinds of things were you suggesting?
So I wrote an op-ed — “10 things we ought to do now” — that got published in the Washington Post on March 2nd. And I can tell you, that had been circulated inside government well before that.

You were part of the Obama administration when H1N1 was happening. How do the viruses, and our responses, compare?
Well, first of all, this has been way more problematic. Spread further. Much more deadly. On the other hand, this one affects older people; that one affected children, which I think raised the stakes tremendously.

It was also a very different response. The moment H1N1 hit, there were two physicians in the White House — one at the National Economic Council, myself at OMB — who actually knew something about medicine and epidemiology. And we quickly set up a whole room filled with real epidemiologists and other people. And right from the start, people were engaged. We were very conscious this could blow up big, and we were not under any illusion that we were in control or that nature couldn’t wreak havoc on us. It wasn’t long after Katrina, and we were fully aware this could be the Obama Katrina event.

It’s hard for people to understand: It’s very difficult for the federal government to work across agencies. The “whole of government” response can only happen with leadership from the White House.

It seems like that’s been late in coming in this particular crisis.
Correct. Look, whatever you want to say about the Obama administration, there was a lot of talent there. We had a lot of capacity — people who understood epidemiology, who understood what resources were available. There was lots of respect for the agencies coming in and giving advice. [With coronavirus,] if we had had a lockdown or shelter-in-place in January, and a full ramp-up of the testing capacity, we’d be in a very different scenario. 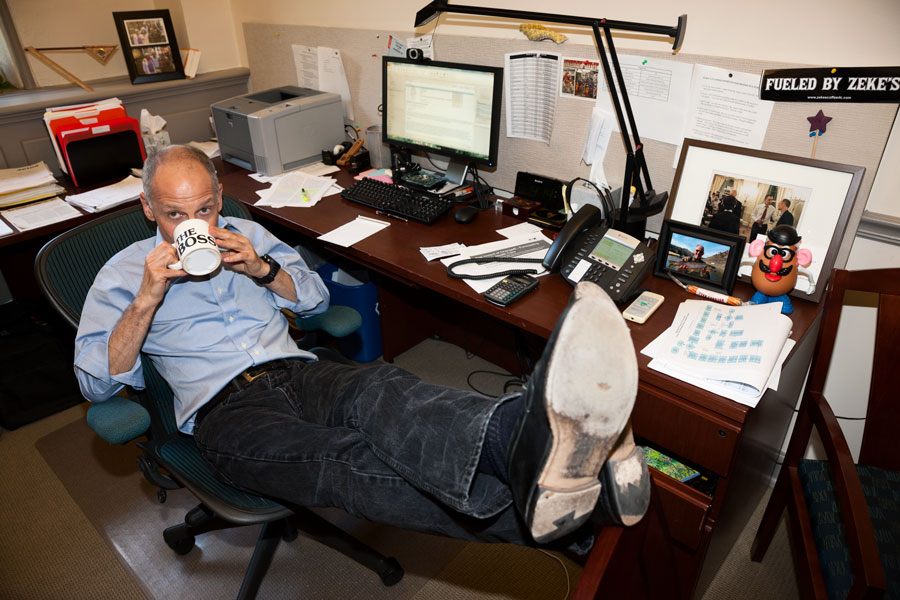 Emanuel in his Penn office in 2014: “We’re all experiencing the same pandemic, but we’re experiencing it very differently.”

You used the phrase “the Big One” earlier. How long have epidemiologists been aware that this kind of thing could happen?
At Penn, for a number of years, I taught a course called “Rationing and Resource Allocation.” And I did a class on “When the Pandemic Comes.” We had a big pandemic in 1918. We had another pandemic in 1957. We had another pandemic in 1968. We are overdue. Every 30 or 40 years — because the immunity is changing in the population, viruses are evolving. And actually, we should expect more pandemics, because we’ve been having this close relationship with nature — the intersection between human beings and nature has been really expanding. Climate change, growth in population, etc. So all the public-health people were like — when is this coming? Not if it comes; when is it coming?

In 2005, HHS issued a pandemic plan talking about how to ration a shortage of vaccines, a shortage of therapeutics, a shortage of ICUs. Now, it was wrong; it was misguided ethically. And that’s what got me started on this. I wrote a paper saying, “This plan is misguided.” And they eventually adopted our approach to it. H1N1 then started states thinking about it. So you began getting thinking on it, but it was very — I would say thinking without a lot of infrastructure-building.

It’s like there’s been an arrogance among Americans — oh, this can’t happen here.
I think you hear this over and over now — a befuddlement. We’ve got the richest economy. We’re spending 18 percent of GDP on health care. How can we run out of ventilators? Those things don’t compute. And I think it’s also, “I’ve got a busy life. There’s an expert somewhere thinking about this, undoubtedly.” And there probably were five experts in a country of 330 million people thinking about it. But we needed a lot more not just thinking, but actually doing detailed planning and infrastructure development.

You wrote a piece in the Atlantic a few years ago saying you wanted to die at 75 — or at least you’ll start resisting certain kinds of medical treatment then. Should that paradigm influence how we deal with COVID-19 patients right now?
No. First, of all, let’s be clear, that article — the article I’m most infamous for — was a personal preference. Very explicitly. This was not a policy recommendation. This is about how I’m thinking about my life. And it was a call for other people to think about their lives and come to their own conclusions.

On the other hand, we now can see … you need to think about your advance directives. Do you want to be intubated? Lots of people say, “I don’t want to be on a machine.” Well, what is a ventilator but a classic machine? So everyone needs to fill out an advance directive. Second, you’ve got to understand, you may be dying alone. And so you need to begin thinking about what that final word is and commit it to paper. Because your loved ones may not be present for you to say it.

The pandemic, and the fallout from it, aren’t hitting us all equally. You and I can work from home, but you have grocery workers and first responders and others who can’t.
We’re all experiencing the same pandemic, but we’re experiencing it very differently. If you’ve got a small business, you’re experiencing having to shutter your business. You and I — what’s the big problem? We’re juggling Zoom and cooking and child care. I do think we need to recognize: Those people in the grocery store? Those guys doing the internet? Those people who are cleaning the hospital? They’re not able to shelter in place. They’re putting themselves on the line all the time. We can’t expect them to work for 15 bucks an hour and no benefits. These people deserve a living wage. Just imagine there are no grocery workers. We are all fucked. Literally fucked.

We have to acknowledge that in the previous economy, not all shared. There’s a word ethicists use, and it’s called exploitation — when the distribution of benefits and burdens is not fair.

How do you balance the need to save lives with the economic piece of this, which is obviously catastrophic in its impact?
Look, this is horrible. Sometimes people say, “You public-health types, you don’t care about the economy.” Far from it. We recognize that having a vibrant economy is one of the best health interventions you can do.

But the first issue is, you aren’t restarting the economy until you get your arms around this virus. The trade-off is not public health or economics. It’s how do you get public health under control so you can begin opening the economy? But we’re not going to open up the same way [things got shut down]. One weekend, we were going to restaurants, and the next weekend, they were shuttered. Every non-essential business was shuttered. It really was over the weekend. You open up much more slowly, working with people who are low-risk, like children, like people who are immune. And then proceed. That’s the only way you can do it. That requires a kind of infrastructure, and I am less than confident that the administration is vigorously and systematically working on putting that infrastructure in place.

We will see a resurgence [of the virus]. But if we can control the resurgence through good contact-tracing, good testing, we can manage this. I describe this as a roller-coaster. We have a big peak now; we’re going to have subsequent peaks. We have to anticipate that. We’re not going back to normal after 30 days.

We have a big peak now; we’re going to have subsequent peaks. We have to anticipate that. We’re not going back to normal after 30 days.”

Have you had a chance to think about how this is going to change us?
I’ve been thinking about how it will change the health-care system, and how we need to put in place policies to capture some of that change. Some of the change, I think, is really good. We’ve abruptly, against our will, really introduced telemedicine, big-time. It shows you that the health-care system can change rapidly when forced to.

This has also reduced substantially our use of elective procedures. We probably didn’t need all of them. Maybe we were doing all those elective procedures because hospitals and the doctors make a lot of money on them, not because they’re really vitally important for people’s health.

How about on a human level? Will this change us, or in two years are we saying, eh …
I don’t think we’re going “eh.” Too much of our life is now being done online, both for good and ill. But understanding that black swan event? Here, I don’t know. We are not as human beings well-wired neurologically — evolution hasn’t prepared us for how to anticipate and live with black swan events. Low probability, very high cost. We’re good at the immediate.

I think people are now going to see things like climate change — I think — in a different light. It’s really possible. And maybe it will make us feel, “I really am in this with other people in my society. How they live. How they work. What they can and cannot do — that really impacts my health.” And maybe that will bring us together. I’m not wildly optimistic about that, because deep recessions, deep depressions don’t bring out fellow feelings. They tend to bring out something like the opposite — just look at Germany, Italy and Spain in the Great Depression. But there’s a possibility, with the right leadership, that this is a different circumstance.

Published as “Going Viral” in the May 2020 issue of Philadelphia magazine.