Technology is a quarantine lifeline, but it’s the stupidest part of it that I’m most thankful for. 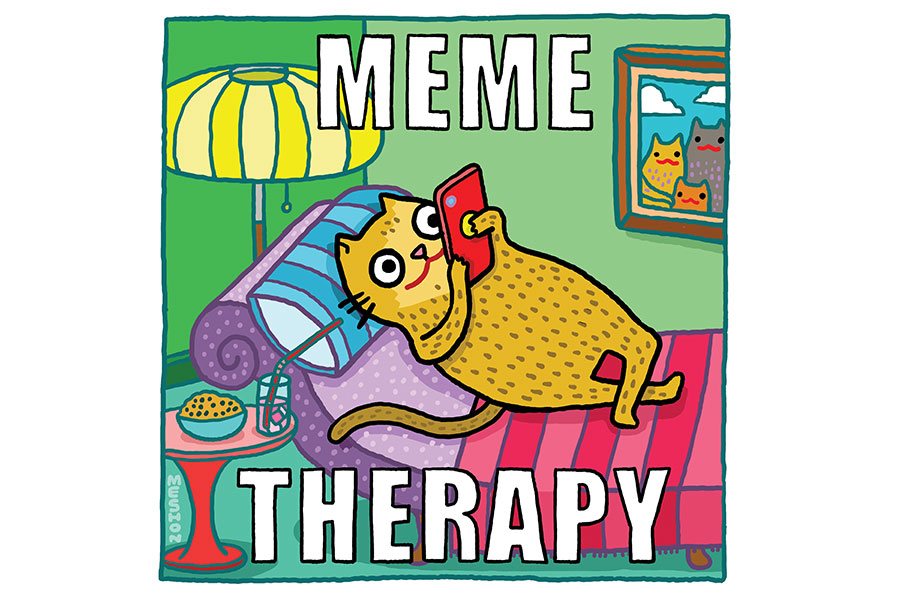 Tiger King memes are getting us through the quarantine. Illustration by Aaron Meshon

Note to readers: While this is an essay about memes, describing one is as cringey as botching a good joke — so I’ll keep that to a minimum.

My husband had an idea. We couldn’t be in the same room with our friends, but we could all watch the same TV show and then talk — er, text — about it. Think Book Club, but for Netflix. This was in the early days of the quarantine, and the show was the soon-to-be-released Tiger King. (This was a curve I was ahead of!)

I won’t insult the creators of the multifaceted docuseries by dissecting it here — I’ll leave that to the New Yorker. But I will say this: It’s so character-rich that it spawned a cottage industry of memes. And the easy-to-text photo/joke combos were almost as entertaining as the show itself. People are so damn creative.

On our group text chain (which was quickly named “Tiger King Quarantine Club”), the memes started flying around. We’d scour social media in hopes of being the person who found the wittiest one. Some caused fights. Some were launching pads to entirely new topics that were met with entirely new memes. My husband and I — working in different rooms of the house — would hear each other laugh. If I closed my eyes, I could hear all my friends laughing. These silly, stupid, fleeting quips became bright spots in the profound but otherwise unremarkable days of the lockdown. (One favorite meme read: “They’re just called ‘day’ now.”)

The Tiger King witticisms are a small part of the movement; funny COVID memes spread as quickly as the virus. I saw ones about how sucky home-schooling your kid is (very), about how much wine is being consumed (a lot), about how we’ll never go back to wearing real pants (sweatpants = life), about Trump’s idiocy and Cuomo’s heroics, and about drinking. (Mentioning drinking twice is warranted; I received a lot of drinking memes. One good one: “Drink every time you hear the word ‘mommy.’ Just kidding. You’d be dead.”)

It’s easy to see why people love sharing memes. They make this confounding situation a little less lonely. A little less scary. A little less depressing. It’s not just that they make me laugh; it’s that they’re the digital equivalent of sitting at my best friend’s kitchen island with a bottle of rosé while she says “I hear you, sister!” to every one of my gripes. The quarantine experience is different for everyone, but it’s also something that most everyone is experiencing, and these satirical one-liners brilliantly articulate how all of us are feeling. You know what’s more important than toilet paper in a crisis? Camaraderie. And humor.

To circle back to where I started, I’ll describe — sorry! — the meme that best sums up my quarantine. It’s a GIF of a cat sitting upright, staring at a computer screen, frantically typing on a keyboard. In bold black letters, it says, “Me and my bestie ferociously tagging each other in quarantine memes.”

Published as “Words with Friends” in the May 2020 issue of Philadelphia magazine.