A Naked Student and Crying Babies: Tales From the Weird First Week of Online Classes at Penn

Students and professors alike are adapting to a new normal under coronavirus, but the transition to virtual learning has been rocky. 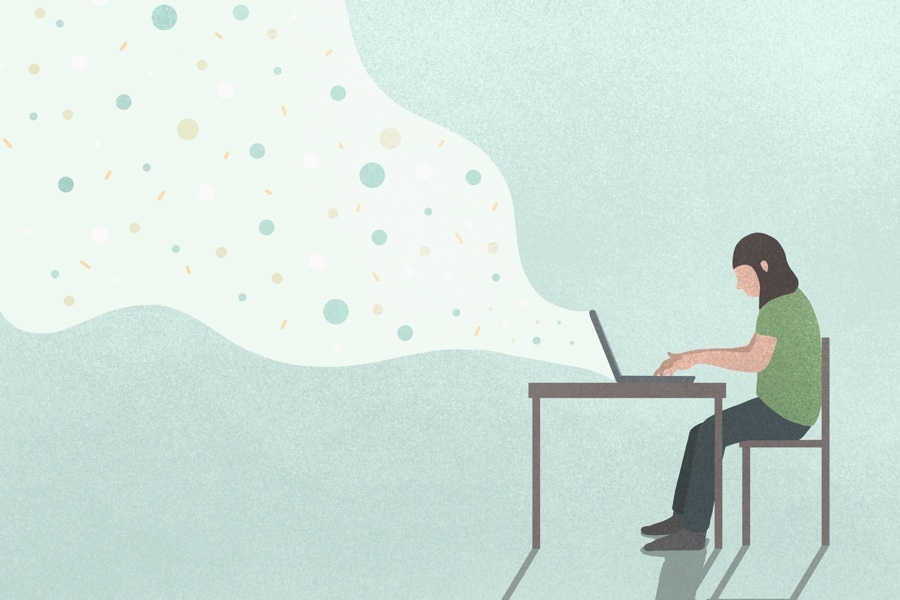 Tales from the first week of virtual learning at Penn. Photo by: Malte Mueller | Getty Images

“Let’s talk about the assigned reading for today. What are everyone’s initial thoughts?”

A simple question to start a class discussion leads to chaos: No one knows how to raise their hand, several students talk at once, the connection slows, and microphones aren’t muted. One classmate unsuccessfully tries to display a thumbs-up emoji on his video icon to indicate he’d like to speak.

This is what my virtual classrooms are like so far since Penn’s online instruction plan kicked off last week.

The professor, realizing we need a system, tells everyone that he will either call on students for answers or that we can try raising our hands over video. People learn to turn off their microphones while others are speaking, which helps prevent feedback, and we all start to relax into this new normal.

One classmate sits in his backyard holding a small dog as another welcomes each plate of snacks her parents deliver during the three-hour session. Most shameless is the student who participates in the class while lying in his bed. “Isn’t that the main perk of online classes?”

Even with only nine people on the Zoom call, there are technical issues. Some students’ internet connections are faulty. Others have to frequently switch locations to avoid the background noise of family members tuned into their own video calls. And, predictably, lags in voice and video function fracture the natural flow of in-person classroom discussions.

My instructors are visibly upset, or at least uncomfortable, with the new setup.

One of my smaller classes — a course in which everyone writes a thirty-page nonfiction story based on months of reporting — is at a loss for how to proceed. Now scattered across the country, my peers and I have to dramatically alter our initial plans and timelines to “work the virus into the story,” as my professor says.

But not every class has the ability to adapt so easily. Lab and engineering courses require in-person experiments, and virtual simulations of those are far from perfect. Along with my senior design team, I spent months building a portable electric heating pad to alleviate menstrual cramps, but all of that hard work is now locked away in the Penn engineering labs. Our new plan? To simulate the heat cycling and temperature ranges of the device on a virtual model we have yet to create. It’s not the same, but it’s our only option.

I’m lucky that, as a senior, all of my classes are project-based. I don’t have midterms or final exams anymore. But friends of mine that do, say attempts to administer notoriously difficult tests in computer science or organic chemistry have been rocky.

One peer told me that she took a virtual test in which a teaching assistant sent students the exam at a certain time, instructed everyone to print it out at home, take the test on paper while participating in a Zoom call (to monitor for cheating), and then — when time was up — scan and submit the exam to be graded. Talk about complicated. What if a student doesn’t have a printer, let alone a scanner? What if another student had to relocate across the globe, forcing them to take this live exam at some obscene hour? And what if a student lacks an adequate home environment for which to take a test?

Grading is proving to be another issue entirely. Last week, Penn told students that they could now take any class pass-fail, regardless of whether students wanted to count that course for a major or minor. To alleviate the stress of this choice, most of my professors have insisted there’s no need to worry about grades this semester, implying that continued interest and active participation would preclude any negative consequences on our GPAs.

Students in pre-health majors have more dire concerns. Medical schools typically don’t allow prerequisite courses like biology or organic chemistry to be taken on a pass-fail grading system. And even now, institutions like Harvard Medical School will only accept students who have taken such courses pass-fail if those students’ universities mandate the grading policy. Not all Penn professors are as forgiving as mine, forcing students to assess whether the risk of taking a class for a letter grade is still worth it.

For all of the stress of online learning though, its newness can be amusing. There’s little motivation to really get dressed for class anymore, and one friend told me about a student who took the situation to an extreme when he accidentally stood up in front of the camera stark naked. (It’s unclear whether he knew his camera was on.) Professors with young children at home frequently have squealing toddlers appear behind them. And some people are even choosing to log on with virtual backgrounds, a Zoom feature that lets users display a video or image of their choice behind them during a video call. My sister’s high school teacher has used an image of a classroom to give students a small sense of normalcy.

Online classes are a far cry from the senior-year coursework I pictured. These video calls represent our new state of relaxed confusion, an aberration from Penn’s polished prestige. But strangely, I feel emotionally closer to my peers and professors than I did before — even after just one week of this new approach. We ask each other how we’re all doing, and we mean it. Professors express a hope that, months from now, we can all see each other again.

There’s an unspoken gravity and sadness to these classes, too. We’re all wondering who has already lost a loved one or who knows someone that’s sick with coronavirus. More often than not, we stray from the course material to talk about how we’re all coping with an unprecedented kind of stress. My writing professor always jokes that our class meetings are more like therapy sessions, and now more than ever, he’s right.