We talked to a junior whose home country of Mongolia has closed its borders in response to the COVID-19 pandemic. Penn's requirement that students leave campus has her, and other international students, scrambling to figure out their plans. 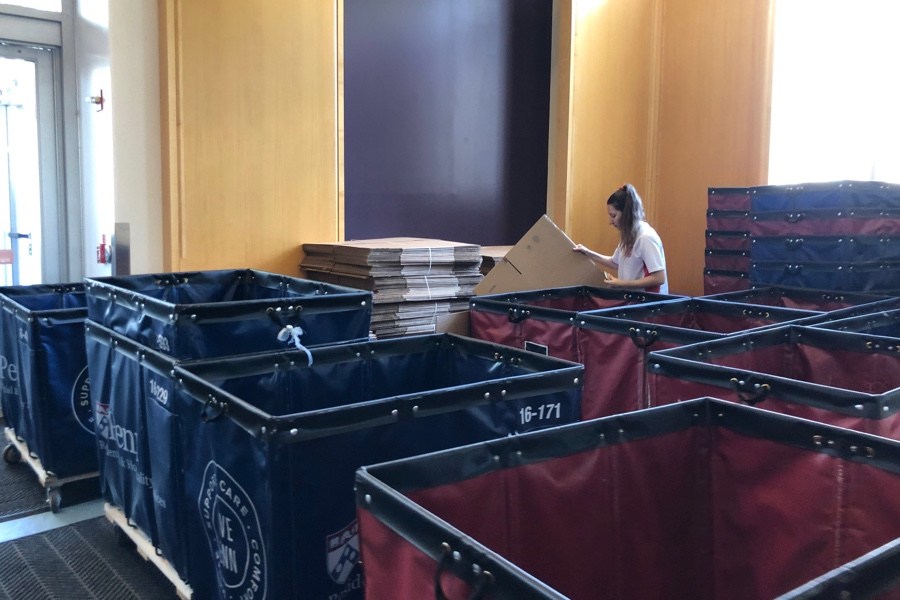 On Sunday, the University of Pennsylvania denied Gantulga’s application to remain on campus. In an email, the university wrote, “Your response has been denied. These were difficult decisions and we sympathize with your disappointment. Time is of the essence and we cannot consider appeals.”

The school explained that, “Many students submitted compelling reasons for wanting to stay at Penn for the remainder of the semester. Honoring all requests was neither feasible nor medically wise given the global guidance to practice social distancing.”

Gantulga told Philly Mag on Monday that she will move in with a friend who lives off campus until she determines her next steps. One option she’s currently weighing is flying to Singapore where her sister lives. Since Gantulga fears she may become a COVID-19 carrier while traveling abroad and potentially jeopardize her family, she is looking to stay at hotels in Singapore until she’s able to get home to Mongolia.

The Mongolian embassy reached out to Gantulga on Monday in an effort to arrange entry into the country. Though Mongolia’s borders with Russia and China are closed until March 28th, the country has sent out charter flights to cities like Istanbul, Seoul, and Berlin to evacuate Mongolians who have been stranded due to the border closures. “I couldn’t make it to any of those cities in time because they only announced the plan on the day of their commencement,” Gantulga said. The country has not yet announced when it will deploy additional charter flights, so Gantulga will have to stand by.

“My friends don’t mind having me, but I just think it could get inconvenient after some time,” Gantulga said. “I always knew I had friends to rely on if things went downhill, but Penn’s rejection was still disappointing. “

It is unclear how Penn made decisions about which applications to accept or deny. The university did not immediately respond to a request for comment about its decision-making process.

“I believed I had a valid reason. But I was wrong,” Gantulga said. “I heard they accepted 400 out of 1,200 of the [applications]. I am just concerned for the 799 others who have been denied housing.”

On Monday, in a mass email to students, associate provost Benoit Dubé said three undergraduate students who traveled together abroad for spring break have tested positive for COVID-19. Two of the students are away from campus, while one will be quarantined on campus grounds. The email also revealed that these students were on campus last week “where they lived in close quarters and socialized with friends.” The school has already identified 20 additional students, in connection with the original three, as having “medium to high risk of exposure, necessitating 14 days of self-isolation and symptom checks wherever they are.”

Last Friday, the school announced that other members of the Penn community have had a confirmed COVID-19 exposure.

Penn’s deadline for moving out is Tuesday, March 17th at 8 p.m.

On Wednesday, the University of Pennsylvania, like many academic institutions across the country, announced major changes to its spring semester to help curtail the spread of COVID-19. Penn first announced that all students had until Sunday, March 15th, to pack up and leave campus. On Thursday evening, the school extended the mandatory move-out date by two days, to March 17th at 8 p.m.

While the situation isn’t ideal for any student, international students at Penn have been hit particularly hard by the changes, with many of them rushing to organize costly overseas travel. Before Penn announced the move-out extension, I spoke with Enkhdelger (Ennie) Gantulga, a student from Mongolia, about how the school’s decisions are impacting her and her fellow international students. Here is her perspective on Penn’s series of “confusing” emails on the matter, the on-campus scramble, and taking classes online for the remainder of the semester.

What year are you at Penn? What are you studying, and what part of Mongolia are you from?
I’m a junior at Penn, and I’m an international relations major and consumer psych minor. I am from Mongolia’s capital city, Ulaanbaatar.

We first started hearing about the new coronavirus in December, when things began to take off in China. What was your reaction when you realized this was beginning to spread in China?
I had been paying attention to the situation more than most people here in the States, since Mongolia is a neighbor to China. My first instinct was, “Oh my God, what will happen to my parents? Will my family be safe?” There’s a lot of business between Chinese and Mongolian people. There’s so much travel going on. So I was keeping up with it since the beginning. It became more global in January, which was also when I got back to the States [from being at home]. I felt helpless to a degree, but my parents weren’t really worried.

Right after China quarantined the Wuhan state, I was a little relieved. And that’s also when Mongolia decided to close its borders with China and a lot of the other Northeast Asian countries. While I was relieved, it still remained in the back of my head. Twice a week, I was calling my parents to check in. I was more worried about them than they were about themselves. I was thinking that because I’m in the States I’m safe, but because they’re in Mongolia, they’re closer to the virus. I think the situation in the States has gotten a lot worse than it is in Mongolia now.

On the afternoon of Wednesday, March 11th, Penn announced that spring break would be extended by a week and that beginning on March 23rd, classes would be conducted online. What was your original spring break plan?
My initial plan was to go to Cancun, Mexico, with some friends. But we ended up canceling that trip, because there was an outbreak in Mexico and because Trump warned everyone that he might close borders with Mexico. I was thinking that if we ended up going to Cancun and Trump closed borders, I’d have to get deported to Mongolia. And I wasn’t very sure whether Mongolia would even accept me. Because it’s a developing country, they’ve been taking a lot of preventative measures. They’ve been on complete lockdown, letting in as few people as possible. They don’t have the means to handle an outbreak if it starts. I was a little worried. And my friends who are international share the same worries.

What is your plan now that Penn has announced that students must leave campus?
It changes a lot of my plans. Initially, I didn’t think I’d have to leave campus. But I was worried once I saw Harvard’s announcement telling students everyone had to leave by Sunday. One thing that really bothered me was that Penn sent an email telling all students that they need to leave campus by Sunday. But then they sent a separate email to international students, which I thought was interesting. Why couldn’t they have compiled it all into the same announcement? I felt the way they brought up the news to the international students had a different tone. It was more like: “Leave.” It gave me the impression they just wanted us to leave ASAP, unless we were from Korea, Iran, Italy or China.

If you are from a country designated Level 3 by the CDC (China, Iran, Italy, South Korea), you may return home, but are not expected to do so. **All other international students are expected to return home.** If you have questions or concerns about how returning home to complete the semester will impact your visa status, you should contact your assigned ISSS advisor immediately.

If you are from a country designated Level 3 by the CDC (China, Iran, Italy, South Korea), you may return home, but are not expected to do so. \***Begin Correction***\ For all other international students, we urge you to strongly consider returning home, but recognize that departing the United States may present challenges. As noted in the email earlier today from Vice Provost for Education Beth Winkelstein, international PhD students on dissertation status and/or doing pre-dissertation research can continue to come to campus, as you are comfortable, to use the library and laboratory facilities. \***End Correction***\

So Mongolia has shut down its borders. Going back home isn’t an option for you. What are you doing moving forward?
I’m living on campus right now in Harrison College House. Penn sent another email [Thursday] saying I can apply to stay on campus, and they’re going to review my application to see if it’s a valid reason. For mine, I guess it’s a valid reason, which I’m thankful for. I’m sure they are going to be understanding. I feel really bad for the people who may not have valid reasons but can’t afford the means to travel back right away and are still getting kicked out of their living options on campus. A lot of my friends are very worried about the flights. These are international students who need to fly back across international waters. Flights are much more expensive. It’s a huge burden for international students, especially on such short notice.

Do you feel that you’ve experienced discrimination on campus of any kind as a result of stereotypes about Asian people and COVID-19? Are people looking at Asian students and other international students differently on campus?
I do not think it has been a problem on campus, which I am very grateful for. Campus became a safe place. I must say, I have been hesitant to go out into the city. There have been so many cases of aggression toward Asian minorities, which is concerning. Obviously, my parents saw the news, and they have called me about it. Me and my friends are more perceptive of the kind of looks people give us and whether they were whispering next to us and whatnot.

Did you have a campus job that you were relying on?
I didn’t have a job, but a lot of my friends are worried about that. Many of them had work-study or worked at local coffee shops.

Is there anything else you’d like to say about how Penn is handling this?
I think it’s interesting that they gave professors and faculty an extra week to prepare online courses, while they gave the students and international students only three to four days to move out. I thought that was an interesting contrast, because moving out and having to plan flying back to your own country takes a lot more coordination. Moving classes online is obviously a lot of work and requires extra hours, but planning a flight during this time is so hard and takes so much coordination. The [initial] four-day deadline was very careless on their part. At that point, they should’ve known how Harvard’s campus reacted to that plan.

Any final thoughts you’d like to share?
I’m really thankful that a lot of my friends who are from the States have been reaching out to me. They have reached out to me with awareness about the situation in Mongolia. They have reached out about housing and accommodations. I think everyone should try to talk to their international friends. We might not be reaching out ourselves because we are so flustered about the changes to the semester. It’s important for everyone to be a little more empathetic at this time.