With two weeks before Nelson Pérez starts his new gig, a big question about the direction of the local church hangs in the balance. 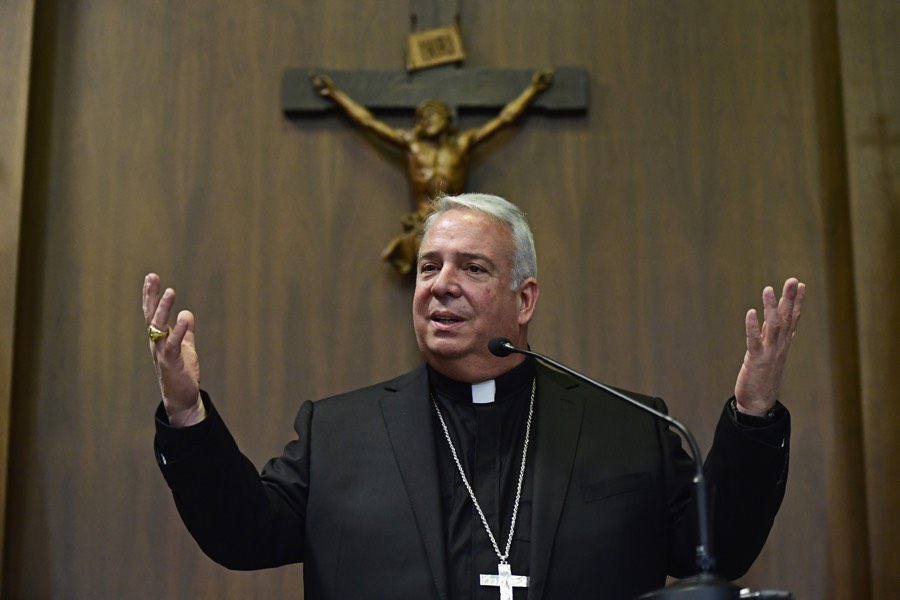 The announcement signifies some other obvious changes: Pérez will succeed Archbishop Charles J. Chaput, who, following church law, submitted his resignation to the Pope upon his 75th birthday last September. Pérez, a Miami-born Cuban American, will become the first Hispanic to lead the Archdiocese of Philadelphia and one of three Hispanic archbishops across the nation.

Less obvious, though, is the question that has Catholic and agnostic onlookers alike engrossed: Does Pérez’s installment, coupled with the departure of his conservative predecessor, cement a progressive shift for Philadelphia’s Catholic community and the Roman Catholic Church at large?

In recent years, Pope Francis has come under fire from conservative U.S. Catholics for actions that they feared would weaken the church, swinging it toward secular values. The opening salvo of the tension came just a few months after Francis was elected in 2013. When asked about gay priests, he responded, “If someone is gay and he searches for the Lord and has good will, who am I to judge?”

The answer, though not contradicting church doctrine that bars homosexuality, was drastically different in tone from what his predecessor, Benedict XVI, had to say on on the subject. In 2005, Benedict wrote that homosexual acts are “intrinsically immoral and contrary to natural law.” He also wrote that people with “deep-seated homosexual tendencies” are “objectively disordered.”

Francis’s decision to even address the topic so openly in an interview on the papal airplane signaled a new approach.

He unfurled this new approach to doctrine in other areas, too. He has controversially argued for a “theology of women” in the church, and this month, in an unprecedented move, he appointed a woman to a senior Vatican role. Francis approved of parish priests giving communion to divorced and remarried couples, writing, “[T]he Eucharist, although it is the fullness of sacramental life, is not a prize for the perfect but a powerful medicine and nourishment for the weak.” In 2018, the Pope even changed the church’s teaching on the death penalty, asserting that capital punishment is no longer allowable under any circumstances.

Last fall, Francis acknowledged tensions with conservative U.S. Catholic leaders, saying, “I pray that there will be no schisms, but I am not afraid.”

Back in Philadelphia, the replacement of Archbishop Chaput — who had become increasingly critical of Pope Francis and who was never made a cardinal — might be “a sign that the Pope […] is still intent on changing the ideological direction of the American church by setting a new tone in one of its most traditionalist dioceses,” the New York Times wrote. And Pérez could be Francis’s latest ally.

But things aren’t so black-and-white.

Rocco Palmo, one of the world’s foremost Vatican watchers and the Philadelphia-based journalist who broke the story of Pérez’s appointment on his website, Whispers From the Loggia, calls the notion of a new progressive shift for the local Catholic church downright “preposterous.” “Catholic teaching already falls on both sides of the American partisan divide,” Palmo says.

If anything, Catholic social teaching leads Catholics to be “politically homeless,” Palmo tells me. On abortion, Catholics stand with Republicans. On immigration, Catholics are far to the left of the Democratic Party. A look at party affiliation among Catholics shows an almost even split between the country’s two leading political parties.

It might be a futile exercise to try to peg clergy like Pérez and Chaput as conservative or progressive. If there is a shift with Pérez, it will be in his theological approach. “Because Catholic teaching is a monolith,” Palmo tells me, “style is substance in the church.”

Chaput, a New York Times best-selling author, has an almost unparalleled style that’s marked by a severe directness and outspokenness on secular social issues, from gun control and abortion to immigration and sex abuse.

From the start of Francis’s papacy, Chaput called the holy leader out, saying that members of the right-wing Catholic church “generally have not been really happy” about the new Pope’s first few months. He suggested that Francis find a way to “care for them, too.”

… [O]nly a fool can believe that “gun control” will solve the problem of mass violence. The people using the guns in these loathsome incidents are moral agents with twisted hearts. And the twisting is done by the culture of sexual anarchy, personal excess, political hatreds, intellectual dishonesty, and perverted freedoms that we’ve systematically created over the past half-century.

In 2016, in a counter to Pope Francis’s more welcoming stance on divorced and civilly remarried couples, Chaput asserted that such couples must “refrain from sexual intimacy” when living under one roof in order to receive communion in Philadelphia. Last year, when Joe Biden announced that he no longer supports the Hyde Amendment, which restricts the use of federal funds for abortions in certain cases, Chaput made his thoughts clear:

The unborn child means exactly zero in the calculus of power for Democratic Party leaders, and the right to an abortion,  once described as a tragic necessity, is now a perverse kind of “sacrament most holy.” It will have a candidate’s allegiance and full-throated reverence … or else.

While Pérez won’t differ much on theology, he certainly isn’t expected to adopt Chaput’s brand of scholarship on hot-button issues. But that doesn’t mean he’ll be more “progressive.” Instead, Palmo points out, the archbishop-elect will have room to pick up on Chaput’s creative city initiatives that blurred partisan allegiances. For example, despite his opposition to safe injection sites for those addicted to opioids in Philadelphia, Chaput backed two local priests in their effort to open the Mary Mother of Mercy House, a chapel and social services center at Kensington and Allegheny.

“I don’t see that as being a conservative thing,” Palmo says. “That’s not a partisan thing. It’s just what the Gospel calls us to do.”

Pérez’s move to Philadelphia is a homecoming. He was ordained in Philadelphia in 1989 and is a graduate of St. Charles Borromeo Seminary in Wynnewood. He served as a parish priest for more than 20 years in Olney, West Chester and Lawncrest. He also made time to teach religion and psychology classes at La Salle University for several years.

At the time of the announcement, Pérez expressed both joy to be returning to the archdiocese where he was ordained to the priesthood and sadness to be leaving the people of the Diocese of Cleveland, where he received much “kindness and hospitality.”

Pérez’s record in Cleveland, where he served a diocese of 700,000 Catholics since 2017, holds the most clues to how he’ll proceed in Philadelphia.

Pérez gained a track record as an “accessible pastor and efficient manager,” the Wall Street Journal reported. Most notably, he grew into a role as an advocate for immigrants in the community. Pérez spoke out against the Trump administration’s family separation policy, calling the immigration system “broken” and a sign that “we’ve lost our moral compass.” He denounced ICE raids that detained local workers and even made personal efforts to get federal immigration officers to cancel the deportation of a father who cared for a severely disabled stepson. Despite Pérez’s call for mercy, the father was deported.

In his first homily in Cleveland, Pérez addressed the racist and violent events that took place in Charlottesville in the summer of 2017. “It’s scary to see those images sometimes on television — underneath all of that is hurt,” he said. “The first thing we need to focus on is to remember we’re all human beings. At the end, we all come from the same place; we’re brothers and sisters whether we accept that or not.”

Philadelphia, a Sanctuary City that’s home to about 50,000 undocumented migrants, will surely welcome a hands-on advocate like Pérez. That he’ll be a Spanish-speaking archbishop with a reputation for being embedded in Latinx communities is probably the most welcome change of all, though that doesn’t exactly push him to the left.

According to Father Frank Berna, the director of graduate theology programs at La Salle, the church in Philadelphia will continue to grow in ethnic, racial and linguistic diversity because Perez “brings critical skills.” “He was able to build bridges between the various ethnic and racial communities in the changing neighborhood of Lawncrest at St. William Parish,” Berna says.

“This is an important appointment,” says a spokesperson with the city. “It speaks to Pope Francis’s recognition of the diversity of the Catholic community in Philadelphia and across the region.”

But the victory for Spanish-speaking people of the Archdiocese, who will no longer be an outreach afterthought, isn’t part of an actual progressive shift, either, at least where church doctrine is concerned. The term “progressive,” Berna says, “carries certain political overtones or expectations that probably are not part of his agenda. I believe we will see a very pastoral approach in his theological thinking, but even more so in his interactions with the people of the city — Catholics and peoples of all different faiths.”

Specifically, Berna anticipates that Pérez will focus on challenging racism and the condition of immigrants at the border: “These themes will probably have some greater importance — as they do with Pope Francis — than some of the other topics that too often do not reflect the major challenges everyday people in the city experience. I believe we will see the continuation of perspectives he offered the church in Cleveland.”

At a time when Mass attendance has dropped, the church is still recovering from the fallout of decades of sex abuse, and the Archdiocese is facing crippling financial realities, Pérez’s proclivity for collaboration — more than any perceived progressive bent — may be the most crucial quality he brings to his new role.