The mayor signed two sustainability bills on Tuesday, including one that aims to cut down on buildings’ energy use — the largest source of greenhouse gas emissions in Philly. 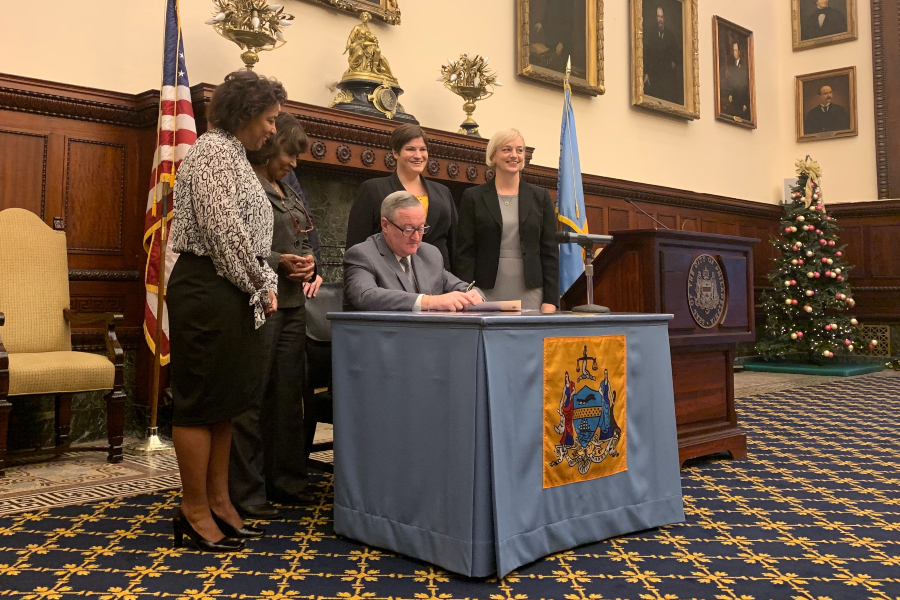 As part of our in-depth look at climate change in Philadelphia this November, we included a section on the city’s single largest contributor of greenhouse gas emissions: buildings.

Buildings, and the regional electricity grid that powers them, are responsible for 72 percent of Philadelphia’s carbon footprint. (Transportation makes up 25 percent, and waste 3 percent.) As you might expect, the largest contributors are colleges and universities, offices, and multifamily housing buildings.

As part of an energy benchmarking law passed by City Council in 2012, those non-residential buildings 50,00 square feet or larger are required to benchmark their energy and water usage annually. Doing so provides citywide building performance data, which the city then discloses publicly.

As part of the benchmarking program, the city released a report on Tuesday that found that since 2013, there’s been a 12 percent reduction in total greenhouse gas emissions from buildings that report their energy and water usage. In that same time period, participating buildings have demonstrated a 5 percent reduction in overall energy use.

Now, Mayor Jim Kenney has signed a bill that aims to continue that trend. The legislation, sponsored by outgoing City Councilmember Blondell Reynolds Brown, mandates that all large buildings must submit a certification of high energy performance to the city’s Office of Sustainability — or conduct tune-ups to bring their existing energy systems “up to a state of good repair.”

To be considered highly energy efficient, a building must earn an Energy Star score of 75. As we explained in our climate change package, Energy Star is a ranking system that compares a building’s greenhouse gas emissions to buildings of similar size and function nationwide. So if a building earns a score of 75, it outranks three quarters of its peers.

As part of the bill, if buildings aren’t deemed highly energy efficient, they must submit tune-up reports every five years to the Office of Sustainability, which is currently helmed by director Christine Knapp. Tune-up reports will include a summary of a building’s energy and water performance issues, which will be identified during energy use inspections, as well as proof that those issues were resolved through adjustments and repairs — which can go a long way toward energy savings in the future.

Building owners who violate the law will be subject to a fine of $2,000, and for each day that the owner fails to file the required report or take a required action, they will be fined an additional $500.

The legislation is estimated to cut carbon pollution in the city by nearly 200,000 metric tons once implemented — the pollution equivalent of eliminating 40,000 cars from our roads.

In a statement on Tuesday, Kenney said the City Council bill allows the city implement “the important and necessary steps to meet the targets of the Paris Climate Accords as the Federal government continues to stand on the sidelines.”

The mayor also signed a bill on Tuesday that phases out the use of so-called “dirty fuel oils” in Philadelphia, or fuel oils with high sulfur content, which has been linked to bad air quality, lung issues, damage to lakes, streams, trees and soil, as well as the accelerated decay of buildings and paints.

“The science is clear,” Kenney said. “We need to act faster and with more urgency to respond to the global climate emergency and avoid catastrophic climate change.”