Think Sylvester Stallone’s younger brother is just an interloper who rides the coattails of his famous sib? He says “Stallone: Frank, That Is” tells his real story. 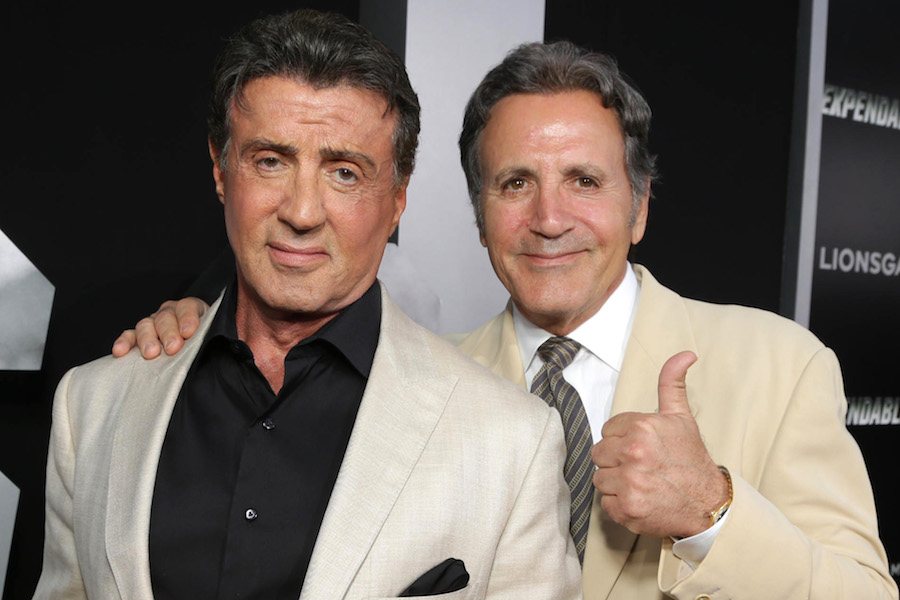 Sylvester Stallone and his brother Frank Stallone in 2014. (Photo by Eric Charbonneau/Invision for Lionsgate/AP Images)

Imagine being Sylvester Stallone‘s brother. Certainly this would have some benefits. But according to Frank Stallone, the subject of a new documentary that’s screening this weekend at the Philadelphia Film Festival, having a ridiculously famous and successful older brother also comes with no shortage of challenges. We caught up with him on Tuesday afternoon to learn more.

I’ve always been a little confused about your family’s connection to Philadelphia. When did you all live here?
I love Philly. I haven’t been back since maybe Rocky Balboa, or maybe to visit my friend Harry Jay Katz, who has passed.

We came here in either 1958 or 1959. My mother divorced my father, and she brought us here from Maryland. She married a guy from Philly. We lived in Rittenhouse Square, and then we moved to Northeast Philly.

Why did you leave?
Well, I was a musician. I put a band called Valentine together with John Oates around 1970. And then he went off on a tour or something [Editor’s note: This tour was presumably with Hall & Oates] and my mother had moved to Florida. There were three versions of Valentine, and the last got signed to RCA. We did Mike Douglas and the Midnight Special and Merv Griffin and Dinah.

And then, I don’t know. I went from doing all of that to playing the Yardley Inn as a solo acoustic act for $40 a night. A real fall from grace. And my brother said, “What are you doing?” I said, “I have no idea.” And he told me to come to California, and I did. And I’ve been here ever since. [Editor’s note: Those a cappella singers on the street at the beginning of Rocky included Frank Stallone and other members of Valentine.]

And what’s the average day in the life of Frank Stallone these days?
I get up very early, I’m in the gym by 6. And I have a lot of hobbies. I have a boxing museum in my home. I do a lot of competitive shooting. And I play a lot of music. I have a really good nine-piece band. We pack them in and get standing ovations wherever we play. But, guess what? I can’t find an agent.

Oh? Why is that?
It’s not for lack of trying. I’ve written music for films that have made $4 billion over time, and I can’t get an agent.

So tell me how this documentary came to be.
Well, the director had done a documentary on John Avildsen, who directed Rocky. And my brother and I both appeared in it. And then he comes to me and says he wants to do a documentary about me.

He said, You’ve been a professional musician for 55 years and have had the stress of having a brother who is one of the biggest movie stars in the world.

And, yeah, everybody thinks that it helps. But it hinders. There’s only room for one person. The other person is thought of as an interloper, whether or not he has talent. And that’s really what the documentary is about.

So the movie tells my story, which has never really been told before, but it’s not me telling it. It’s other people telling it. Sly is in it, John Oates is in it, and my friends Duff McKagan from Guns N’ Roses and Richie Sambora from Bon Jovi and Geraldo Rivera, Frankie Avalon, Burt Young, Talia Shire … they are all in it. Oh, and my 98-year-old mother. She’s a trip. She’s a classic.

You’re a producer on the documentary. Did you exert creative control?
Not really. I didn’t want to interfere. I gave them some notes here and there.

But when I asked all of those people to be in it, I told them that if they think I am a jerk or an idiot, that’s what they should say. I didn’t want them to sugarcoat it.

Back in September, you went on Facebook and said that the documentary was rejected from the Philadelphia Film Festival — you wrote, “I believe they never even watched it” — and yet here you are coming to Philly this weekend to screen it at the fest. What happened?
I don’t know. We weren’t accepted. And then all of a sudden they said, Hey, let’s have a special screening. Maybe finally somebody watched it and said why is this not in the fest.

We won Best Documentary Feature at the Burbank Film Festival. But we got turned down by Toronto, New York, and quite a few other big festivals. I don’t even know if they watched it.

Again, this is what the whole movie is about. They see my name and they think it’s all about riding on my brother’s coattails. I don’t get taken seriously. Most people could never handle what I’ve gone through. The rejection and the presumption of who I am. But you can prevail. And that’s what Rocky is all about. Win, lose or fail. Nobody owes me anything.

What’s the best part of being Frank Stallone?
Being 69 and being able to get up every morning and be healthy and still have a passion for music. And I’m a lot better off than a lot of other people. There are people who live in a box, who can’t get a piece of bread.

What’s the worst part of being Frank Stallone?
That presumption. People thinking they know who I am. People saying, “What’s it like living in the shadow of Sylvester Stallone?” I’ve never been in the shadow. That’s their perception. Things like that. Or people saying, “Hey, Frank, I really like your brother … he’s so much cooler than you.” People say really stupid stuff.

OK, rank the Rocky movies, including the Creed films.
Well, I love the first Rocky, of course. My second favorite is Rocky Balboa. I am not a fan of Creed, but my brother should have won the Best Supporting Actor for that. Everybody thought he was going to win. Like when Peter O’Toole was denied for Lawrence of Arabia.

If I had to pick anything in the middle, it would be Rocky II. Then once you get to Rocky III, he loses he scars and somehow becomes intelligent. He gains intellect. But I like them all, really.

Oh, c’mon, Frank. You’re gonna sit here and say you like Rocky V?
Well, no. I’m not gonna say Rocky V, but that one is also very sentimental to me because my late nephew is in it.

You’ve had quite the life of ups and downs. You defeated Geraldo Rivera in the boxing ring at the behest of Howard Stern. And you were nominated for a Grammy for your work on the Stayin’ Alive soundtrack, somehow losing to the Flashdance people. What’s been the high point?
The gold and platinum album for Stayin’ Alive and that Grammy nomination, and I was nominated for a Golden Globe, too, for that. Before that movie, I was at the end of my rope. I had no money. I worked and worked and worked and then all this good stuff just happened. That was my shot.

You ran into some controversy on social media for mocking teen survivors of the Parkland mass shooting. Does your brother ever call you up and tell you to chill out with the political rants?
That was a bad mistake, and I apologized for it and lost some gigs over it. It was a mistake. Everybody does dumb stuff sometimes.

You certainly don’t shy away from politics and your support of Donald Trump in your social media feeds. You recently took to Facebook to call Nancy Pelosi delusional and dreadful.
I’m not going to apologize for being patriotic. I have friends who are very, very liberal. I don’t judge people on politics or religions. I have mine. They have theirs. I’m not the type of person who unfriends people. I have a live-and-let-live kind of attitude.

OK, last thing. The holidays are coming up. Your mother is Jackie Stallone, the astrologer and former women’s wrestling promoter. Your brother is one of the most recognizable faces in the world. What’s Thanksgiving like? Do you guys all actually get together and eat turkey like the rest of us?
My mother does her own thing. She has her own set of friends — at 98. I go with my brother and his girls and friends, and there are millions and millions and millions of cousins. Me, I live alone. I’m single.

Wait. You’re single?
I’ve always been single. Always kind of a lone eagle. If it’s there, it’s there. I don’t put much time or energy into it. But never say never. Who knows? People meet people at 72. I still have an eye for the girls. I like the women. But it’s never been a priority. I’m a fly-by-the-seat-of-my-pants kind of guy. Like Katharine Hepburn.