There’s something remarkably cringeworthy about displaying gross wealth and status in public spaces — especially in a city that has such a devastating wealth gap. 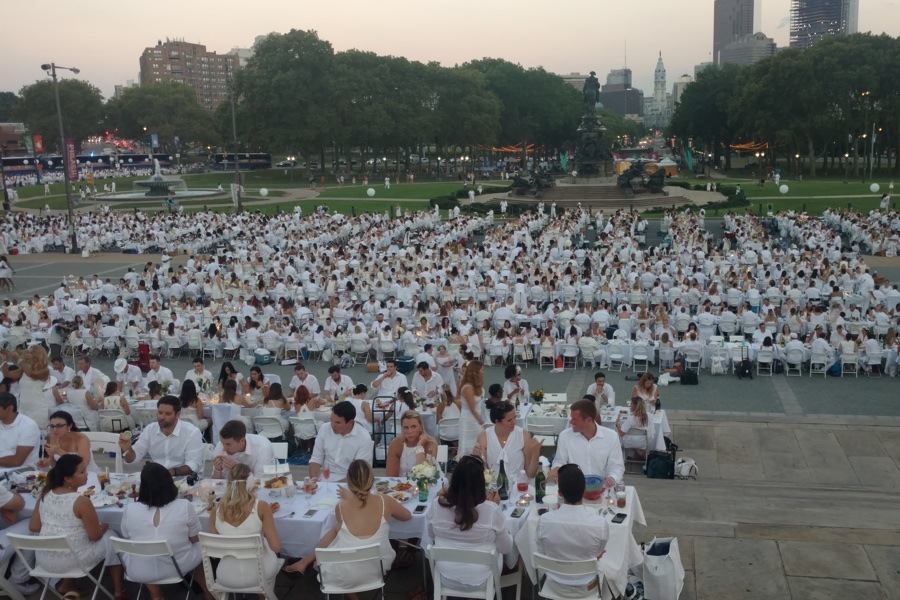 Being a young Black gay man in a world that generally makes it a point to deny me such experiences, I seek out posh things unapologetically. I join exclusive clubs. I do “staycations” at high-end hotels for birthdays. I throw private parties at upscale restaurants for my friends who get big promotions and earn advanced degrees. Some consider me a snob, but I consider it having a slice of pie I didn’t get to taste growing up.

That’s why I was initially fascinated with Dîner en Blanc, the annual all-white pop-up soirée that originated in Paris in the late 1980s. In the last decade, dozens of cities across the world, including Philly and Washington, D.C., have participated in gatherings of thousands of people who pay $55 a person for the privilege of wearing only white and bringing their own food, wine, and tableware to a secret-till-the-last-minute outdoor location. Even the lottery process for entry is exclusive — you need to be pre-selected by a previous attendee to be considered — and the signup site routinely crashes in the annual clamor for tickets. Despite the hassle, the event’s international cachet keeps drawing Philadelphians back year after year. (The 2019 outing is this Thursday, the 22nd.)

I attended Dîner en Blanc in 2016, when it was held on the steps of the Art Museum, and in 2017, at Franklin Square. The first time I went, I didn’t understand what the hell was going on. It was a sea of whiteness (literally and figuratively), and had I not recognized a few famous and familiar faces, it would have been utterly forgettable. Most of the event is simply firmly established people eating around other firmly established people talking about established shit that you wouldn’t care to recall the next day. If you want to see a crowd of intoxicated adults taking selfies throughout the evening and posing all over parts of Philly in white attire, this is the place to be.

I attended a second time because I thought maybe I was being too tough on the event, and I got acquainted with a few folks who were involved with putting it together. Publicly, I tried my hardest to have a good time. The table centerpieces people brought were pretty, the fashion was notable, the joy some guests seemed to have was precious. But, less tipsy than the year before, I began to look beyond the marked-off party lines and at the city as a whole. And then a sobering reality hit me.

Why are some of the most influential people in Philly taking up public space to grossly flaunt their status in the poorest major city in America?

And that’s why I didn’t strive to go back last year or this year, nor will I ever again. It’s one thing to like nice things — it’s another to parade in front of those who don’t have them.

Some will say that those who critique Dîner en Blanc are folks who haven’t attended and don’t get it. The “you don’t know unless you go” crew will try to act like you’re missing out on something sublime. They will label you as a hater or someone who envies those who can afford to indulge in such banter. But as someone who has gone twice, let me simply tell you that it is truly the elitist, pompous, what-do-you-do-for-a-living-so-I-can-judge-you-on-the-spot kind of event that you think it is. It still projects the private country club vibe while trying to act like it has less venom because it pays a Black DJ to spin top 40.

Philly doesn’t need this and shouldn’t even want it. We’re a town awash in gross poverty, gun violence, and segregation. People were rightfully furious about how last year’s event at City Hall caused traffic in the vicinity to snarl — imagine how it felt to the homeless there to see hundreds of people eating and drinking in heedless abundance.

Tell me: How does that thought look sitting next to your pâté and merlot?