In a strong show of unity, more than two dozen government officials — including Gov. Tom Wolf and U.S. Sen. Bob Casey — rallied against gun violence at City Hall. Meanwhile, the feds and President Donald Trump are sending a different message. 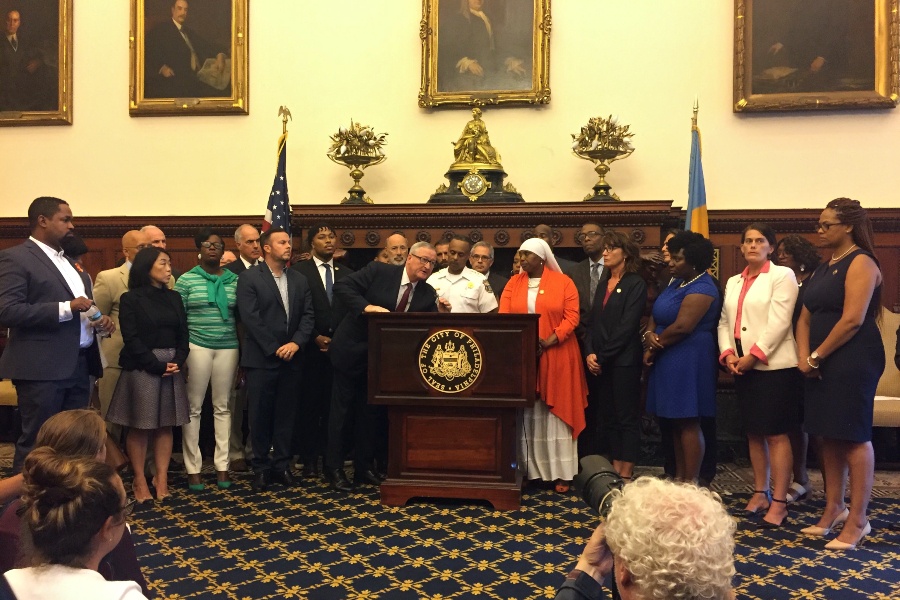 More than two dozen representatives gathered at City Hall on Thursday after the North Philly shooting on Wednesday. | Photo by Claire Sasko

More than two dozen local politicians gathered at City Hall on Thursday afternoon to push for stricter firearm laws in the wake of the North Philadelphia shootout that saw six Philadelphia police officers shot — none fatally — and attracted national attention on Wednesday evening.

Others, including district attorney Larry Krasner and U.S. reps Mary Gay Scanlon and Madeleine Dean, as well as Councilmembers Brian O’Neill, Alan Domb and Helen Gym, stood by in support.

Those who spoke by and large called for stricter gun control measures, including an emotional Kenney. Some, like Street, also spoke of violence in Philly as part of a larger epidemic tied to poverty and education — and called for policies addressing both. Everyone thanked and praised the first responders who flooded the scene of the hours-long shootout on Wednesday.

Perhaps most notably, Casey used the podium to push for the passage of two specific Congressional measures: universal background checks on gun sales and a ban on military-style assault weapons, which Casey called “weapons of war that should not be on our streets.”

“One of the problems is, in Washington, the NRA and far-right groups have a grip on the Republican caucus and the Senate,” Casey said. “But basically when you break down their argument … when they say, ‘We’re not even going to debate these issues,’ … what they’re saying is that the American people, who represent the most powerful nation in the world, should surrender — surrender to this uniquely American problem of gun violence.

“That is not the American way,” Casey continued. “We don’t do that in America. We don’t surrender to any problem.”

As one group of leaders responded to the shoutout by pushing for stricter gun control, U.S. Attorney for Pennsylvania William McSwain and President Donald Trump called for police and lawmakers to crack down on crime, with McSwain, in particular, shaming officials in Philadelphia.

In a press release on Thursday, McSwain — who was nominated by Trump in 2017 — blasted Krasner and what he sees as “a new culture of disrespect for law enforcement in this City.”

“The alleged shooter last night, Maurice Hill, is a previously convicted felon with a long rap sheet,” McSwain said in a statement. “We have plenty of criminal laws in this City — but what we don’t have is robust enforcement by the District Attorney. Instead, among other things, we have diversionary programs for gun offenses, the routine downgrading of charges for violent crime, and entire sections of the criminal code that are ignored.

“But it is now time for the District Attorney and his enablers to stop making excuses for criminals,” the statement continued. “It is time for accountability. It is time to support law enforcement and to put the good people of this City first.”

McSwain and Krasner, a progressive firebrand who won the crowded race for DA in 2017, have long been at odds over their beliefs surrounding criminal justice. At his own press conference on Thursday, Krasner praised police officers for keeping North Philly residents safe on Wednesday evening. He said Hill will most likely face aggravated assault and attempted murder charges.

“There will be a lot of charges,” Krasner said at a press conference on Thursday. “These are more than enough charges so that Mr. Maurice Hill may never exit jail.”