Tensions are sure to rise in round two, and you don’t want to be screaming at your TV screen alone. 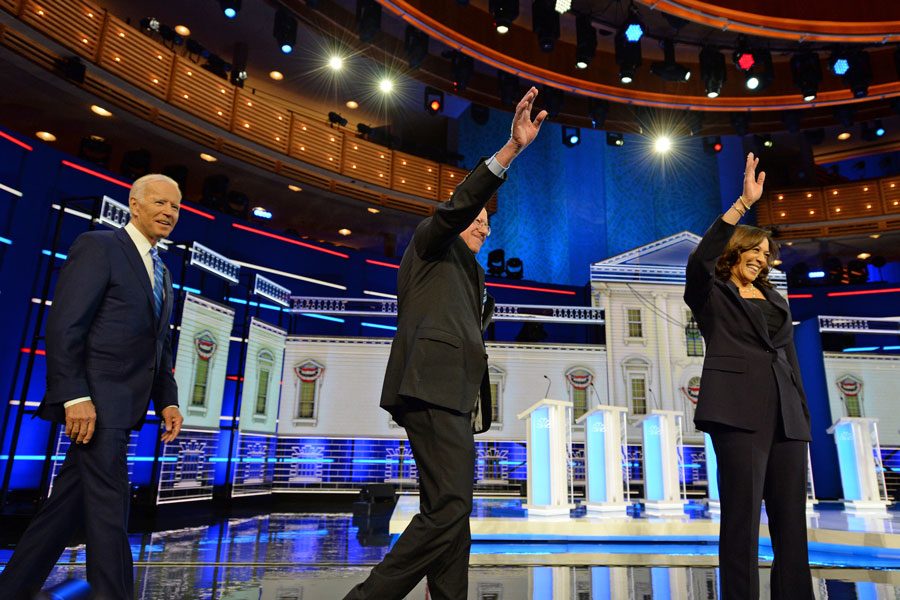 Support for frontrunner Joe Biden slipped in the polls after Kamala Harris pried into his civil rights track record. Elizabeth Warren starred among the first of the two debate lineups, championing her progressive platform. Second-tier candidate Beto O’Rourke took some heat for his platitudes, and others, like Jay Inslee, Michael Bennet, and Tim Ryan, struggled to make a name for themselves.

The field is still remarkably large. Twenty different candidates will appear during this week’s debates, including Biden, Warren, Harris, Bernie Sanders, and Cory Booker. (Meanwhile, former Pennsylvania Congressman Joe Sestak still hasn’t qualified.) The rules will be slightly different this time around: no questions that require a show of hands or one-word answers.

Tuesday and Wednesday will feature the last Democratic debates of the summer, including a head-to-head battle between Warren and Sanders (on Tuesday) and a rematch between Biden and Harris (on Wednesday). If you’re keeping tabs on the primary or just want something to do to break up your week, take your pick: join the press community at the Pen and Pencil, root for Warren at the Field House, cheer for Sanders at First Unitarian Church, or wait ’til night two for some pizza and soda with the Drexel Democrats.

Pen and Pencil Club
7 to 11 p.m.
1522 Latimer Street, Center City
Once again, the Pen and Pencil —America’s oldest daily operating press club —will host a watch party for the 2020 Democratic debates, opening the bar an hour before start time on both Tuesday and Wednesday. If you want an informed audience, as well as cheap drinks, and you love the press (or are part of the press), this is the place to be.

Philly for Warren
8 to 11 p.m.
1150 Filbert Street, Center City
Warren received the third-most speaking time during the first set of debates and will likely hear her name called quite a bit this time around, too — especially since she’ll be paired with fellow progressive Sanders. Join the Philly for Warren group at the Field House to network, hang out, and watch the Massachusetts Senator voice her platform.

Philly DSA Bernie Sanders Debate Watch Party
7:30 to 9:30 p.m.
First Unitarian Church, 2125 Chestnut Street, Center City
Warren might have her fair share of Philly supporters, but there are also plenty of Philadelphians who are still feeling the Bern. Philly DSA voted to endorse Sanders back in March, and, according to the organization’s Facebook group, members currently see him as the “most popular politician in the country.” If you’re on board, come to the Parish Room of First Unitarian Church for a free BYOB watch party.

Liberty City Democratic Presidential Debate Watch Party
7 to 10 p.m.
225 South 12th Street, Center City
The Liberty City LGBT Democratic Club is welcoming all members of the LGBT community and its allies to Knock Restaurant and Bar for the first night of this week’s Democratic debates. Not only will drink specials be available, but also State Representative Malcolm Kenyatta will be in attendance.

Second Democratic Debate Watch Party! Night 2
8 to 11:30 p.m.
3400 Lancaster Avenue, University City
The Drexel Democrats will provide pizza and soda at The Summit for the second night of debates. Founded in 2015, the Drexel Dems are a political organization at Drexel University. For college-aged voters, this might be your best bet to make some friends while watching the back half of the debate lineup.

Democratic Debate Watch Party in West Chester
7:30 to 10 p.m.
15 South High Street, West Chester
Live in the suburbs and don’t want to make the trek into the city? Don’t fret. Join Democratic supporters throughout Chester County for food, refreshments, and a night filled with conversations and commentary. The event is free, but be sure to RSVP here.

Presidential Debate Watch Party
7 to 10 p.m.
1420 Locust Street, Rittenhouse
Young Organized Philly, a non-profit that advocates for unionized workers in Philly, is hosting a watch party at the Haute Restaurant and Lounge. Stop by to learn more about Philly union members and enjoy the final night of this week’s debates.