When a Center City water main burst in the middle of the night last July, it launched some 15 million gallons of liquid into the street. 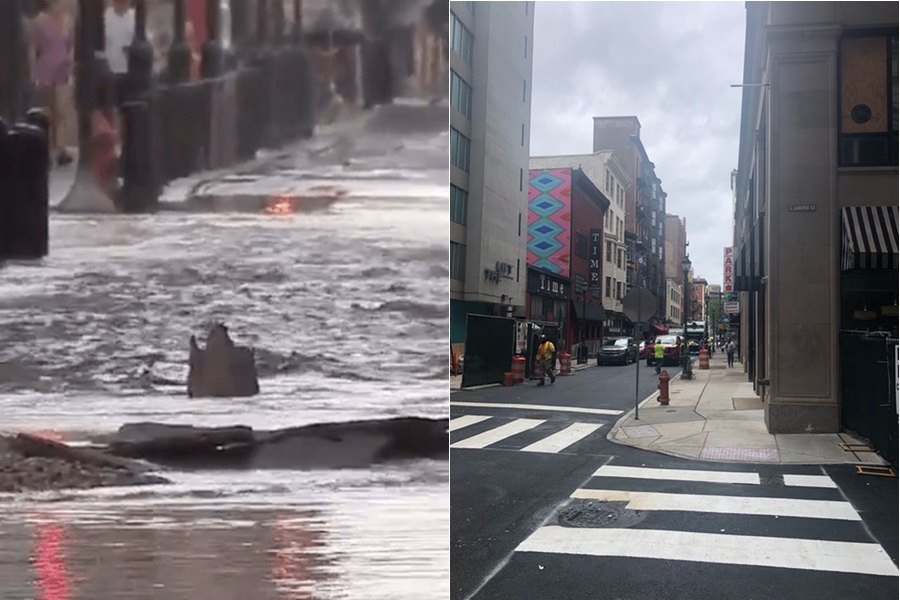 What is it with this city and giant, gaping holes in the ground? There’s the sinkhole along Baltimore Avenue in West Philly, the “large void” that appeared near Independence Hall on 5th Street in the spring, and of course, the void de résistance, the water-main break that has closed off a stretch of Sansom and Juniper streets in Center City for the better part of a year.

You can say goodbye to the latter hole, though. On Friday the city is finally reopening Sansom Street between 13th and Broad, as well as Juniper Street from Chestnut to Sansom, after a $1.7 million repair effort that took 11 months. (Part of Juniper, from Sansom to Walnut, will remain closed due to construction on an apartment building there.)

If you don’t quite recall what the scene looked like last July, when the hole was born and temporarily transformed Center City into a not-very-appealing public pool, here’s a visual refresher.

Chris Mullins @McGillins just sent this picture in from near ground zero of the water main break in Center City at Sansom and Juniper Streets. Says it’s slowing down . Building on right is Hale Building , green building is parking lot on right not shown is Chestnut St pic.twitter.com/gbw1urX7Vt

Many of the city’s water mains date to the 1800s, leaving them vulnerable to corrosion. When the Sansom Street main burst in the middle of the night in July, it launched some 15 million gallons of liquid into the street. Businesses flooded. The Greek restaurant Opa was shuttered for months. And even then, after the water was drained and businesses reopened, they struggled to attract customers — you know, with the massive construction equipment and road closure blocking foot traffic. The effect was to cordon off restaurants and bars as if they had the plague.

The repairs — which involved replacing more than 200 total feet of various water pipes, repaving Sansom from 13th to Broad, replacing street lights and sidewalks, and re-lining hundreds of feet of sewer — were expected to be complete by the early part of this year. Clearly that didn’t end up happening. The delays were apparently due to the various utilities companies, like Philadelphia Gas Works, PECO, and Comcast, which had to undertake their own repairs to their subterranean street infrastructure, separate from the Water Department.

The Inquirer reported that the Midtown Village Retail Association provided a $15,000 grant to all businesses affected by the flood, which was to be spent on advertising and attracting foot traffic in the aftermath of the flood. Meanwhile, businesses can also apply to the city for a certain amount of reimbursement of lost revenue. But the city’s liability totals only $500,000, and there have already been $1 million worth of restitution claims. (The city says roughly 30 businesses experienced some form of water damage from the flood.)

But at least the saga is finally over. McGillin’s Olde Ale House is throwing a party to celebrate on Friday. And now the Water Department can turn its attention to that pesky sinkhole 3 miles away on Baltimore Avenue, which has been disrupting traffic and businesses of its own. People in West Philly: Just be grateful your sinkhole is only supposed to take three weeks to fix.