Rushing to Top Up Your SEPTA Key? You’ll Have to Watch This Ad First.

At least one person has already complained about missing a train thanks to SEPTA’s new captive advertising pilot. 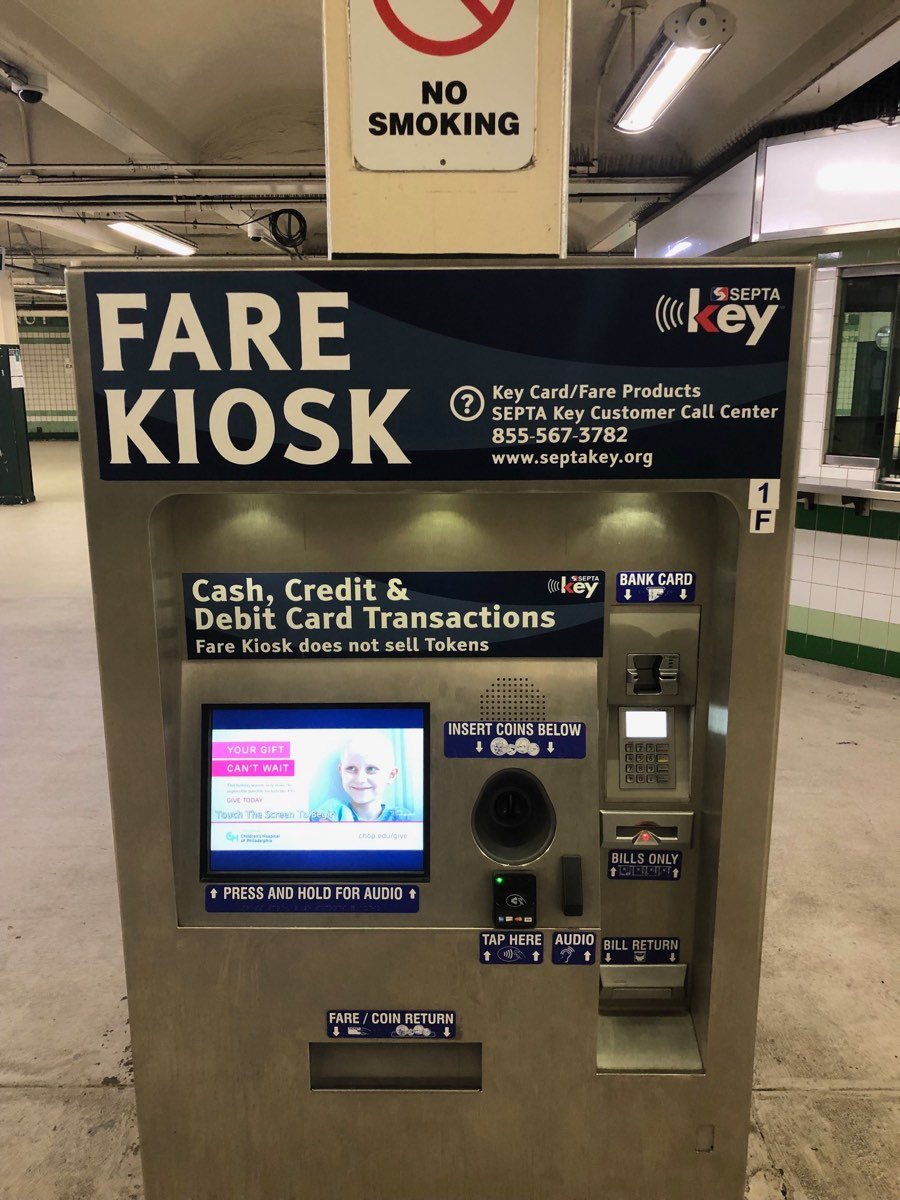 Would you like a side of capitalism with your subway fare? Actually, you have no choice. Photo by David Murrell.

It’s a rare thing, these days, to find a true example of what marketers call a captive audience. It used to be the case that an advertiser could slap an image along the inside of a subway car, and your options were essentially twofold: Distract yourself with a book or magazine, or give the ad a read (or three). It’s not like you had anything better to do as the train rumbled along.

But now, thanks to smartphones and tablets and the like, it’s become much easier to tune out the world around you. Even TV commercials aren’t what they once were. One might almost feel sorry for advertisers, who make their living imprinting images of their brands onto your pliant brain.

But someone at SEPTA has thought up a pretty ingenious — or nefarious, depending on your perspective — idea: The transit agency has started putting advertisements on fare kiosk displays, which you have no choice but to click through in order to purchase your ticket. Long live the captive audience!

Here to report that you now have to click through ADVERTISEMENTS before you can purchase SEPTA Key fare at least at the kiosk at Walnut-Locust. Yes, I missed my train. Yes, I’m mad.

Is this fair or foul?

On the one hand, SEPTA’s facing a potentially catastrophic risk to its budget, on account of the Pennsylvania Turnpike, one of its biggest funders, being billions of dollars in debt. SEPTA made $14.5 million in advertising revenue in the last fiscal year, which is pennies compared to its billion-dollar budget. A couple of extra bucks in the coffers from ad revenue wouldn’t be the worst thing in the world, would it?

Counterpoint: As a SEPTA kiosk assistant noted on Monday morning at the Walnut-Locust station, one of the stations in which the ads are playing, “the kiosks are slow already.” The last thing the janky system interface needs is another click that seems to take an eternity.

And then there’s the ethical component: It’s such a blatant use of captive audience marketing. Sure, every one of us as consumers probably knows how much we are directly and indirectly exploited in the name of advertising. But the best advertising techniques at least have the tact to allow us the pretense of thinking we have autonomy. The SEPTA fare kiosk strategy is far more blunt: You want to take SEPTA? You must watch this ad first.

SEPTA says the ad program, which debuted a few weeks ago at selected stations along the Broad Street and Market Frankford Lines, is only a pilot, with ads implanted on 20 of the agency’s 300 total kiosks. The idea is that the advertisements, which cycle through the touch screen kiosks, will linger for a second or two after you click them to begin your transaction. Spokesperson Andrew Busch says SEPTA’s tried to avoid having the ad-bearing kiosks deployed at high-traffic stops. “We may revisit having that one there,” he says of the ad at the Walnut-Locust station downtown.

(A test on Monday morning at that station revealed that the kiosks weren’t even functioning properly. After hitting the screen, the advertisement disappeared immediately, and a bright blue panel popped onto the screen instead.)

So far, SEPTA hasn’t made a dime off its new invention. That’s because the ads you see at the kiosks haven’t actually been paid for. SEPTA is simply splicing the campaigns from preexisting advertisers onto the kiosks — that way, Busch says, if there’s a problem with one of them, SEPTA can take it down immediately, without any obligation to a client.

Busch says SEPTA’s welcoming feedback on the pilot. The early returns have included some complaints: “We have heard from a couple people about the ads lingering up longer than they would like,” Busch says. “They’re wanting to get through their transaction, which is understandable.”

Of course it will all come down to a cost-benefit analysis, and the thing is, even if SEPTA makes a good-faith effort to hear the qualms of its riders, there’s ultimately not a whole lot of cost to the agency, because people are going to take transit no matter what, even if they have to click through an advertisement first. Captive audience, remember?

Which is why this really makes us yearn for the days of SEPTA tokens, those little silver and copper coins that you couldn’t update with a software patch or emblazon with advertisements. Sure, we often complained about the minor embarrassment that came with Philly languishing in the past as the last major city to accept tokens, while everyone else had already leaped into the future with newfangled fare kiosks. But in retrospect, maybe tokens weren’t so bad after all. Sometimes you don’t realize what you’ve got until it’s gone.