Evil Genius Made a Sixers-Themed “Trust the Process” Beer

Just in time for the playoffs. 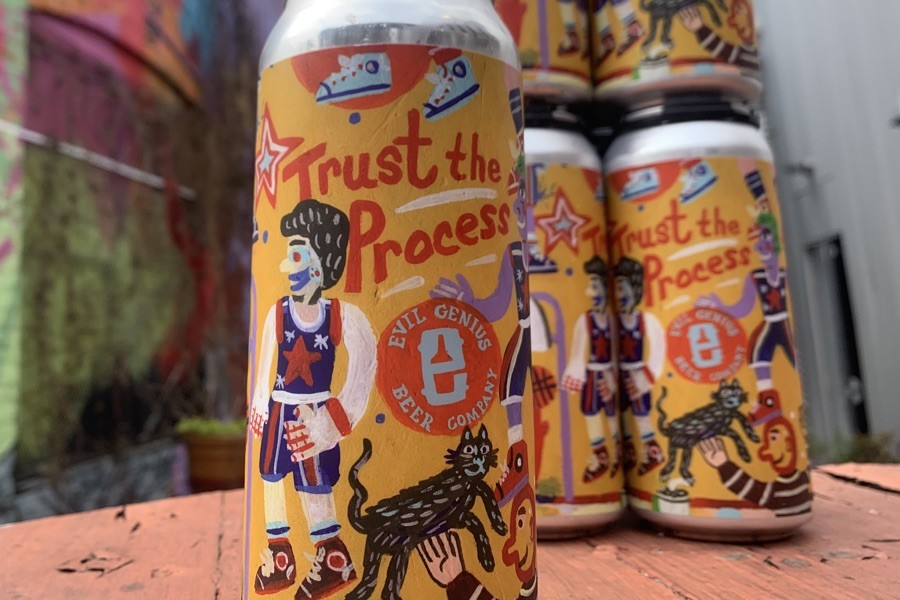 As any follower of basketball knows, the playoffs are a stressful time. The Sixers promptly dispatched the Brooklyn Nets in five games earlier this week, but when they begin their next series against the Toronto Raptors on Saturday, it’s going to be a tougher affair. You’d be forgiven for desiring a nice, bubbling libation to help take the edge off. Thankfully, the beer folks at Evil Genius Beer Company know this, and they’ve concocted a special Sixers-themed “Trust the Process” beer just for you, the nail-biting, stressed-out fan.

Trust the Process is the latest in a long line of basketball-inspired beverages from Philly-area breweries. The beer’s alcohol content of 6.7 percent is significantly higher than Ben Simmons’ career three-point percentage (0 percent) — which is good, because if they were equal, you’d basically just be drinking water. You’re going to need a bit of a kick if you’re using Trust the Process as a means of calming your frenetic self down amid the playoff chaos.

As for the actual process of this beer’s creation: It was brewed with a blend of 2-row and oat malts, and subsequently dry-hopped with Mosaic lupulin powder and Amarillo hops. If that means nothing to you, know this: Evil Genius co-founder Trevor Hayward says those malts and hops all combine to produce a beverage that is “insanely aromatic and juicy” and has hints of  guava, lemon, pineapple, and clementine. Yum.

If you’re the sort of fan who gets so worked up that you need to watch the game in the privacy of your home, you can pick up a four-pack of 16-ounce cans from Evil Genius’ Fishtown brewery and take them to go. At 20 bucks, it’s a bargain when you consider the real “Process” is costing the Sixers $113 million in payroll this season.

Gritty Gets a Beer Named After Him: Nightmare Fuel

Evil Genius will also be hosting a watch party at their on-site beer garden — one of the city’s top outdoor drinking locales — on Saturday for the Sixers’ first game against the Raptors, where Trust the Process will be served on tap. That’s not the only beer-related Sixers promotion on Saturday, either: The team has announced you can get a free can of Coors Lite at a 17 select Philly-area bars before the game.

The whole point of Trusting the Process is that you’re supposed to forgo short-term payoffs in favor of longer-term successes. But when it comes to this special beer, you should throw all that out the door. It’s a limited run, so if you want to pick up a can for posterity, forget the aphorism and just act fast.