It's outdoor drinking season in Philly. Here's everything you need to know to make the most of it. 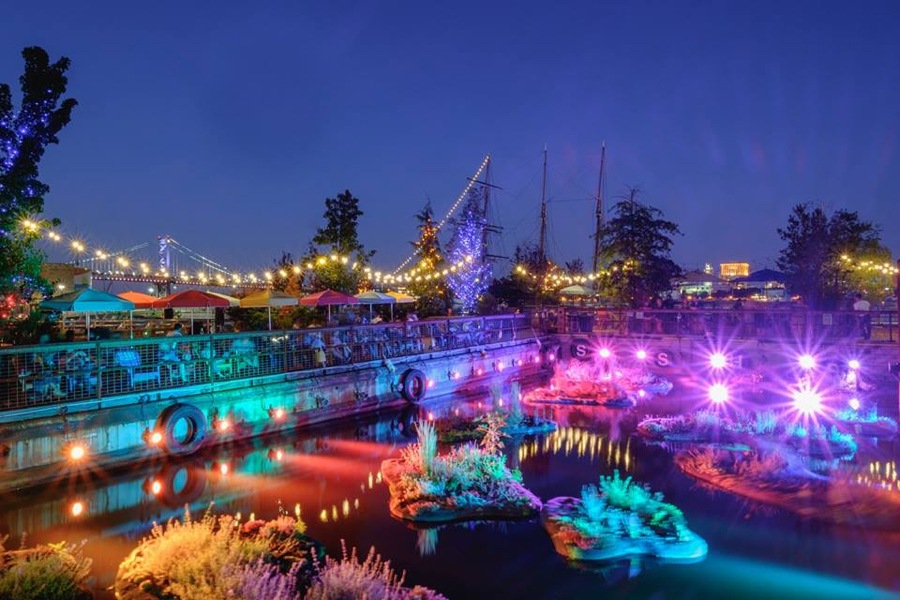 Philadelphia loves its pop-up beer gardens — and al fresco drinking season has finally arrived. Here’s a neighborhood rundown of everything you need to know about the city’s full lineup of beer gardens for 2021, from where you can go sip a cold one outside now to details on beer gardens opening in the coming weeks. 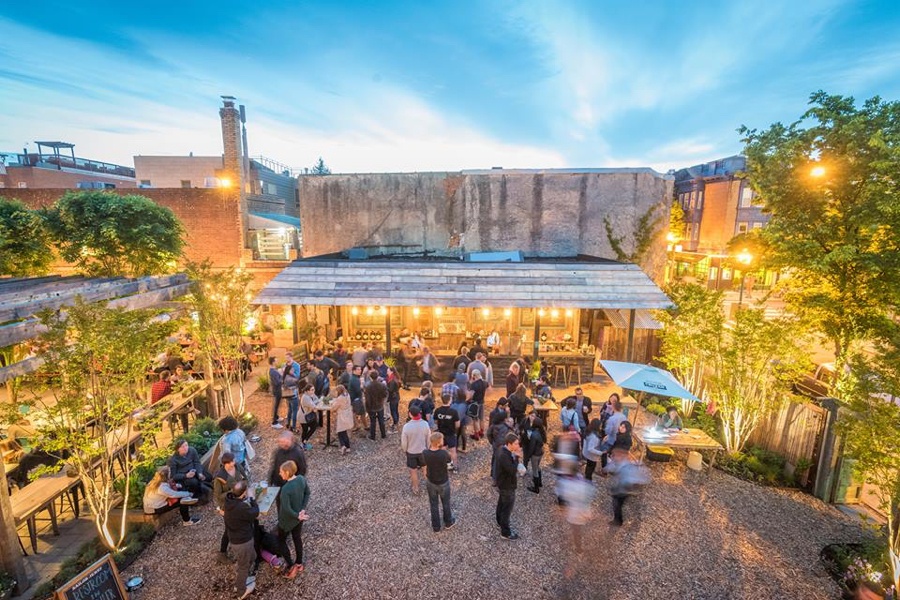 PHS Pop Up Garden at 15th and South
Open now
Back for a sixth year, the Pennsylvania Horticultural Society has teamed up with the crew behind Royal Tavern, Khyber Pass Pub, Cantina Los Caballitos, and Triangle Tavern for bites and sips like Frito pie, Buffalo ranch popcorn, and strawberry-spiked frosé at their spot near 15th and South (check out the full menu here). Stay tuned for their schedule of botanical-themed events like plant swaps and flower crown workshops through summer. 1438 South Street

Drury Beer Garden
Open now
The comfortable beer garden behind Opa is really year-round, but summer is obviously the best time to enjoy a sip and some spanakopita from the Greek restaurant’s kitchen. It’s open at 4 p.m. daily until seasonal hours kick in on Monday, April 29th; then, you can hit up Drury starting at 4 p.m. on weekdays and 1 p.m. on Saturday and Sunday. 1311 Sansom Street

Jet Wine Bar
Open now
Sometimes you want something a little more elegant than a pint — that’s when Jet Wine Bar is the place to go. Their garden is comfortable, casual, and features a full menu of global wines and shareable bites. 1525 South Street

Giant
Open now
The very new, very fancy Giant by the Riverwalk has many lovely amenities, but our favorite is the patio overlooking the river where you can sample quite a wide variety of beers on tap before or after you shop. 60 North 23rd Street

Uptown Beer Garden
Summer
Over the last few years, Uptown Beer Garden has grown in size and comfort, carving out a lovely space in the middle of Center City. Details about the 2021 season aren’t out yet, but keep an eye on their social media for updates. 1735 Market Street 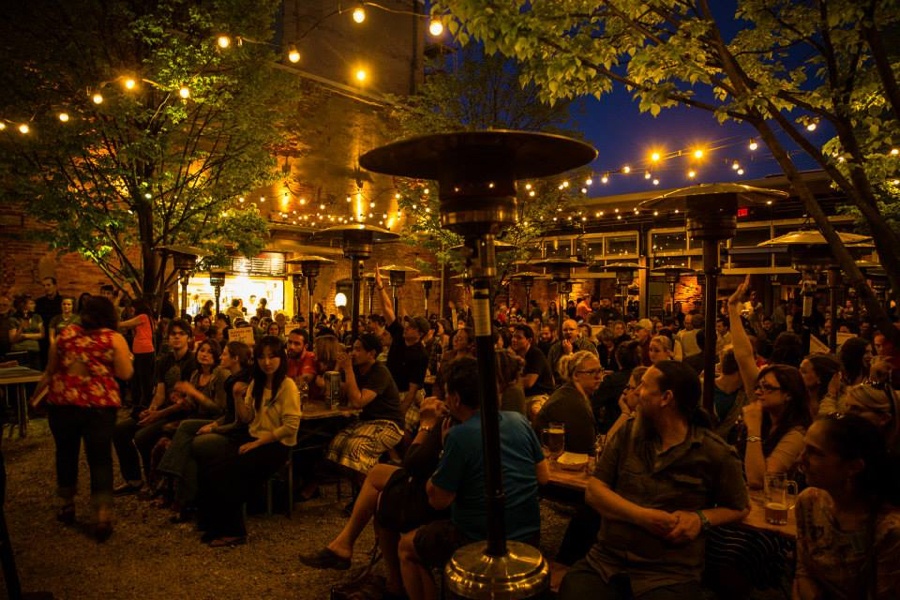 Frankford Hall
Open now
Stephen Starr’s German-style beer garden is open all year round, but it really gets hopping when the heat lamps are put away. Bring one friend or 30 — it’s big enough to absorb all comers. 1210 Frankford Avenue

Urban Village Brewing Company
Open now
Urban Village is the spot for large groups who want to share many pizzas and drink beer all afternoon. Their offerings typically include 15 to 20 drafts, as well as the option to take home cans of their brews. An added bonus: fried pickles. 1001 North Second Street

Memphis Taproom
Open now
Once the outdoor space was designated only for canned brews and overloaded hot dogs served from its resident food truck. But these days, the gastropub’s full menu is available outdoors, too — there’s even glassware and real cutlery, real fancy-like. They open the outdoor patio space whenever it’s good weather, so check the forecast before you make your al fresco drinking plans. 2331 East Cumberland Street

Canstatter Volkfest-Verein Biergarten
Open Fridays from May to October
This German-American club dates back to 1873 and currently boasts the largest outdoor beer garden in Northeast Philly, with five acres of picnic grounds. It’s open every Friday through October from 5 p.m until 10 p.m., with live bands (both German-themed and not) and bar food, plus a beer list heavy on the pilsner and lagers. 9130 Academy Road

Evil Genius Beer Garden
Open now
The mad brewers at Evil Genius kept their beer garden through the winter this year, but it’s still worth going back to be reminded why this is one of the best breweries in the city with a spacious, rock-chair bedecked beer garden. 1727 North Front Street

Philadelphia Brewing Company Beer Garden
Open now
Technically, you can drink outside at PBC any time the weather’s nice while the Peacock Room, their adjoining bar, is open (that’s 11 a.m. until midnight Tuesday through Saturday, 11 a.m until 9 p.m. Sunday, and 5 p.m. until 11 p.m. Monday). But spring and summer are the best time to take advantage of the picnic tables and bountiful planters they’ve added to the family- and dog-friendly outdoor space. 2440 Frankford Avenue 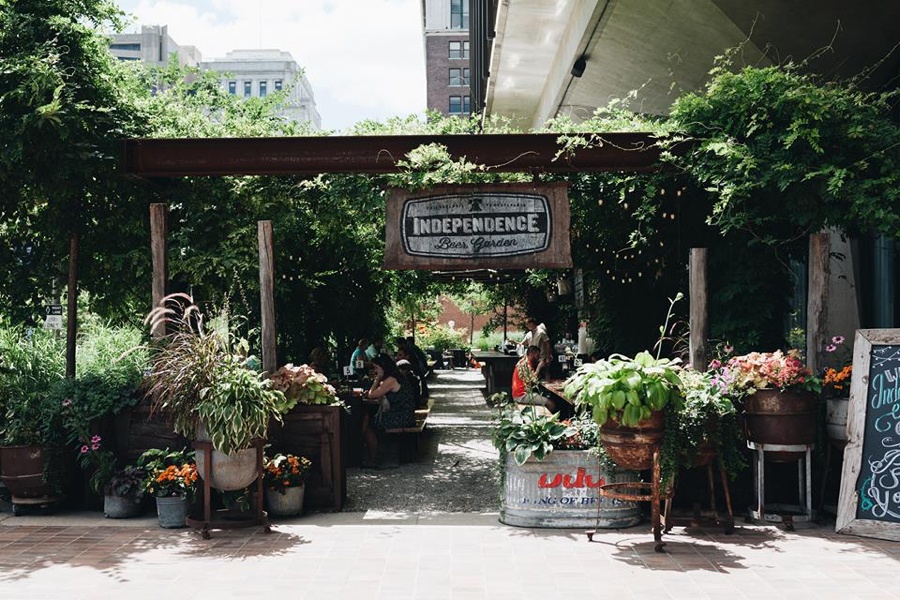 Old City Beer Garden
Open now
With it’s murals and picnic tables, Old City Beer Garden has a particularly Philly vibe. Pair tacos and nachos with their large list of beers, plus quite a few hard seltzers, if you’re into that kind of thing.

Blue Cross RiverRink Summerfest
opens soon
The Penn’s Landing ice skating rink transforms once again into an outdoor roller skating rink and mini-golf course with a “boardwalk on the Delaware” vibe, complete with a Ferris wheel and views of the river. Official dates for 2021 haven’t been announced yet, but it’s typically a weekends-only until Memorial Day, then open seven days a week through the end of August. 101 South Christopher Columbus Boulevard

The Garden at the 9th Street Bottle Shop
Open now
The Di Bruno Bros. has owned the empty lot across the street from their wine shop in the Italian Market for years, but they didn’t convert it to the best drinking spot in the city until 2020. Settle in at picnic tables and enjoy the curated beverages from the bottle shop across the street, as well as the option to bring in takeout from any of the surrounding restaurants, including Kalaya, Angelo’s Pizza, and more.

Sunset Social
open now
When the summer days turn the streets of Philadelphia into a veritable oven, go upstairs to the rooftop of the Cira Building, where the breeze blows, the frose flows, and the movie nights are the best vibe in town. 129 South 30th Street

Pentridge Station
Opens June 1st
This once-vacant lot on a Cedar Park side street was transformed into a family-friendly hangout two years ago by the owners of nearby Dahlak. Now, you can hang out and sip a beer, play giant Jenga, enjoy food truck fare, and dance to DJs Friday and Saturday nights from 6 p.m. until 11 p.m. throughout the summer. They’ll also be popping up at Greensgrow West just a few blocks away for brunch on Sundays from noon until 5.pm. 5116 Pentridge Street

Parks on Tap
Open now.
In 2020 Parks on Tap switched up their programming to keep the pop-up beer gardens in the same place all summer long. They’re doing that again this summer, and starting with a locations at Trail’s End and Waterworks. Check out their site for expanded offerings throughout the summer. Various locations 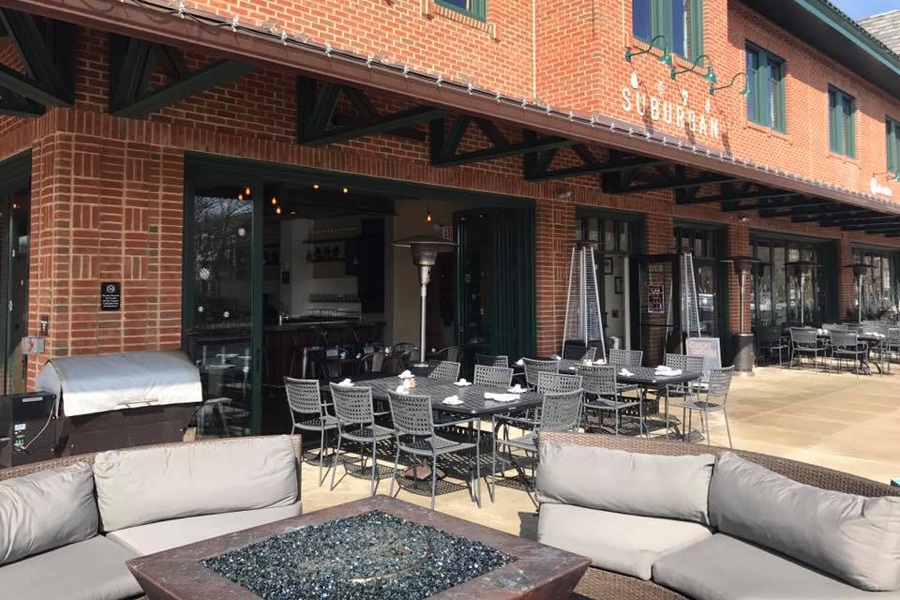 Suburban Restaurant and Beer Garden
Open now
With chef Eric Yost’s bona fides as a former executive chef at White Dog Cafe and Wyebrook Farm, Suburban’s beer garden grub might be the most sustainable in the region: locally sourced cheese, bacon, and produce dot the menu. The spot’s big outdoor section also serves the most restaurant-style menu of the gardens on our list, eschewing boardwalk fare for handmade pastas and full entrees in addition to the usual fries and sandwiches. 570 Wellington Square, Exton

Chestnut Hill Brewing Company Beer Garden
Open now
This brewery on Germantown Avenue boasts a large outdoor seating area festooned with live plants where guests can enjoy a pint and a wood-fired pizza and get comfortable on couches — a beer garden rarity — in addition to chairs. 8221 Germanown Avenue

The Beer Garden at Longwood Gardens
Opens May 9th
This beer garden within an actual garden serves up Victory Brewing Co. beer, wood-fired pizzas, and sandwiches from 4 p.m. until 9 p.m. every Thursday through Saturday evening from May 9th through August 31st, then again from September 5th through October 26th from 4 p.m. until 8 p.m. It’s the perfect way to end a day strolling through what’s possibly the region’s most renowned botanical garden. 1001 Longwood Road, Kennett Square