Think you’re saving the planet by putting plastic forks and pizza boxes in your blue bin? Really you’re just contaminating the products that are actually recyclable — and costing the city a truckload of money in the process. 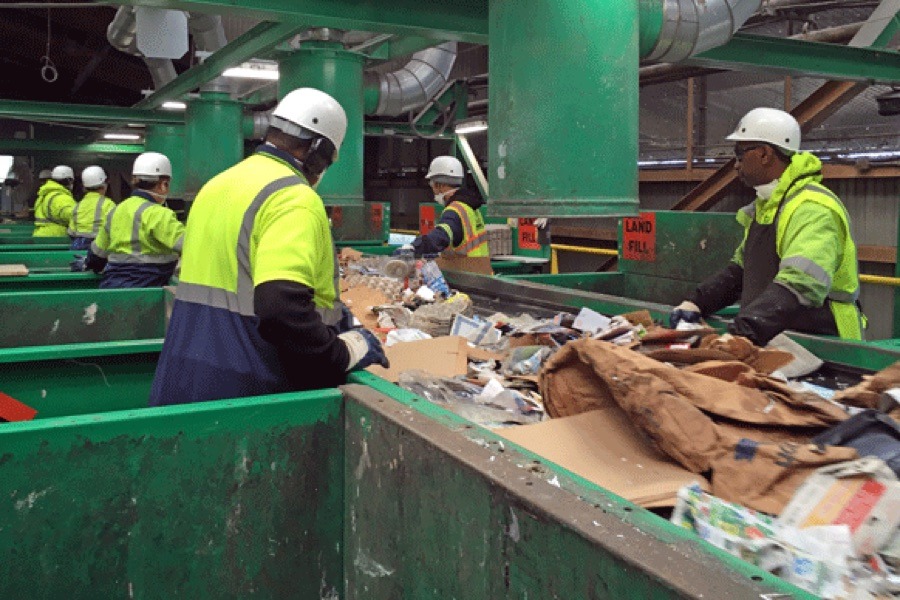 Workers sort recylable from non-recyclable products at a facility. The more junk there is in the recycling stream, the more people are needed to perform the sort, raising costs. Photo courtesy of Julie Hancher.

On any given weekday, recycling trucks fan out across Philadelphia on a taxpayer-funded quest to save the planet, one blue bin at a time. But ever since last fall, half of the city’s collection hasn’t ended up at the recycling plant. You might have thought your bottles, cardboard boxes, and old magazines were on a path to a reincarnation as a different product — in reality, they’ve likely as not been reduced to ash in a Chester incinerator.

Recycling in Philly is currently on life-support. Here’s how we got to this point: Last summer, the city’s contract with its recycling plant expired, and officials learned the price was set to increase from about $30 per ton of recycled goods to $170 per ton. That was untenable, so the Streets Department found a different plant offering a better quote of $78 per ton — but it could take in only half of what the city collected.

The city arrived at a solution: pay $78 per ton for half of its recycling, and then shell out another $67 per ton to send everything else to that incinerator in Chester. The incinerator ends up converting the burned materials into energy, so city officials argue it’s at least quasi-renewable. (Environmental groups have serious doubts about the merits of incineration, not to mention that residents of Chester are infuriated about getting stuck with Philly’s trash and breathing in the smoke constantly belched out of the incinerator.)

This recycling devolution is a shocking development, because for years, the practice was a lucrative enterprise for Philadelphia. At a recent peak in 2012, the city netted $67 per ton of recyclables — good for $6.6 million in revenue. And only five years ago, the city still earned money, yielding $2.3 million from the 127,000 tons it recycled. But then in 2015, recycling plants began charging more as commodities prices dropped, and Philly had to start paying for the very goods it was getting paid to provide just a year earlier.

It’s wasn’t an entirely unexpected development — the recycling industry has always been volatile, ebbing and flowing with the tides of international commodities markets. The going rate for plastics, for instance, has long been linked to fuel prices worldwide: If fuel is expensive, it becomes cheaper to reuse old plastic rather than make it from scratch, and vice versa.

What was unexpected, however, was the decision from one of the largest purchasers of American recyclables to effectively stop importing them.

Fluctuations have always been an unavoidable reality in recycling. But the main reason for the sudden spike in costs is because China — a longtime buyer of America’s recycled goods — decided last year it would only purchase recyclables if they were virtually spotless. Anything with a contamination rate of more than 0.5 percent was suddenly no good, even though the industry standard used to be 3 percent. Philly’s recycling, meanwhile, usually arrives from the bin 15 to 20 percent contaminated; it’s then on the recycling facility, through sorting and cleaning, to reduce that figure from there. But reaching a contamination rate of 0.5 percent is all but impossible for any large municipality to meet.

“China’s essentially not taking anything in from the U.S. right now, so material has to go other places,” says city environmental planning director Scott McGrath. “That’s what caused the market disruption.” The other buyers — countries like Brazil, India, Indonesia — don’t purchase as much as China, and so as recycling plants make less money, they charge Philadelphia more.

Despite these market dynamics, it’s still a little hard to understand why Philadelphia didn’t have a better plan B than quietly shuttling half of its recycling to a trash incinerator. “They violated the Boy Scout motto of ‘Always be prepared,’” says David Masur, executive director at statewide sustainability group Penn Environment. “Markets rise and fall, be they recyclable materials or the housing market, or anything else.”

In fairness, Philly is hardly the only U.S. city that’s been forced to pause its recycling in the wake of these risings costs. And the incinerator situation is really a temporary solution, officials argue, until the city can negotiate a cheaper contract, which could happen in a matter of weeks. City recycling director Kyle Lewis remains optimistic about the future value of recyclables. “We have confidence that the market is going to shift,” she says. “We are committed to recycling.”

But that commitment clearly comes with a maximum price. And Masur feels as though Philadelphia, in thinking so narrowly about the economics, has lost sight of why it began to recycle in the first place. “Nobody started recycling because it was huge cash cow,” he says. “They did it because it was the right environmental policy to address concern of the throw-away society we live in.”

Fifty years ago, hardly anyone recycled. In some cities, pollution was so bad it produced profoundly unnatural, oxymoronic occurrences, like rivers catching on fire — the sort of thing you might expect from God in the Old Testament, but not from a major American city. It was in this climate — one in which only 15 percent of paper was recycled in 1970, compared to 67 percent today — that the environmental movement was birthed. Many of the first “green” campaigns, like the famous “crying Indian” PSA that first aired in 1971, tried to guilt-trip the public into changing its behavior.

And by all accounts, it was successful! In 1987, Philadelphia became one of the first major U.S. cities —  despite its unfortunate reputation as a trash-strewn cityscape, or perhaps because of it — to institute a mandatory recycling program. That year, the New York Times wrote of Philadelphia’s “battle against skyrocketing trash disposal costs and shrinking landfill space.” The argument was part-economical, part-ethical. Recycling would save some money, sure; but it was also an antidote, a way the public could feel less culpable for its gluttonous culture of constant consumption.

The concept of recycling remains popular to this day for these same guilt-assuaging properties. But hard-core environmentalists, like David Masur, know it’s not a true savior: “The core of the problem is that we have created a world where it’s cheaper to throw away than to give back to the three R’s that we’re taught as kids — reduce, reuse, recycle.” Julie Hancher, editor-in-chief of the Green Philly blog, agrees that recycling is really just obscuring a bigger problem of consumption. “There’s an illusion of what recycling is doing,” she says.

Because people want to feel better about their environmental habits, they often end up making matters even worse through their poor recycling behavior – what Lewis, Philly’s recycling director, calls “wish-cycling.” Maybe they’ll toss a pizza box in the bin because, hey, it’s cardboard and it’s not too greasy, or maybe they’ll throw a plastic fork in there, because, hey, it is plastic, after all! But neither is recyclable. (Here’s what actually is recyclable, by the way.)

These bad habits contribute to the 15 to 20 percent contamination of Philly’s recycling stream. And while the advent of “single stream,” which lets you combine glass, plastic, and paper all together in one bin instead of separating them out, may have made recycling more convenient, it’s also enabled the very same wish-cycling that has crippled the entire system. In fact, some studies have determined that although single-stream increases the total amount people recycle, the uptick in contamination effectively cancels out gains to the final amount that can actually be reused. “People want to recycle, and we appreciate that,” says Lewis. “But we need to change that message and say, ‘When in doubt, leave it out.’”

The Streets Department says it will soon finalize a contract with a recycling provider that should once again take all of the city’s salvageable detritus. Lewis and McGrath insist the Chester incinerator solution was never more than a short-term stopgap in the wake of financial stresses. But just because recycling is likely returning for everyone doesn’t mean you should go back to mindless consumption — ordering delivery when you could walk, using paper bags at Trader Joe’s instead of a reusable one.

“We have to change how we think about waste,” Hancher says. “Recycling should be the last part of the solution. The first thing we need to do is figure out how to reduce trash.”