One year after closing his legendary Girard Avenue shop, Beddia is back with a new eponymous Fishtown restaurant. 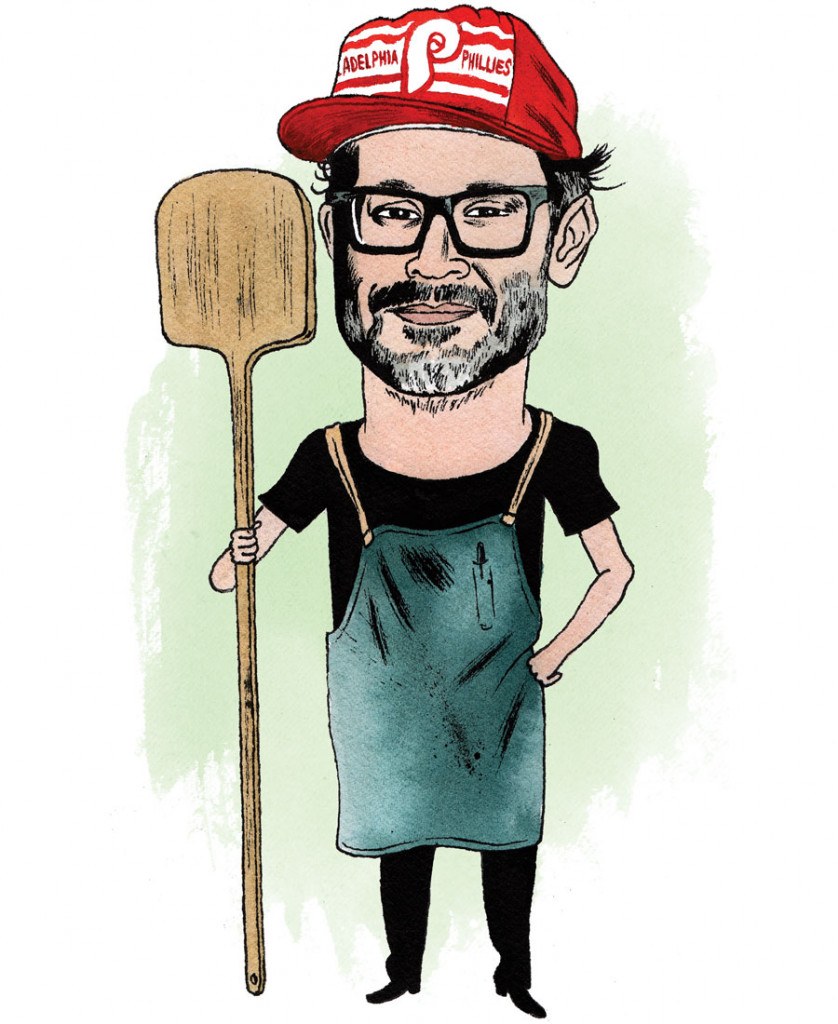 Joe Beddia is the owner of Pizzeria Beddia. Illustration by Andy Friedman

My last name is pronounced … BED-ee-ah, but everybody says beh-DEE-ah. It’s Sicilian. My dad was born in Sicily.

I live in … Fishtown, where I’ve been for the last 17 years. It’s amazing how much it’s changed, though there’s still nowhere to eat. But it’s getting better. In 10 years, you won’t recognize the neighborhood.

My relationship with pizza these days is … that I’ve gone from a maker to a teacher. At my last place, I made every pizza. That’s not happening at the new place. What I did was sustainable for five years, and then it wasn’t. It was either have a partnership or no pizza at all — forever. Those were the two options.

The hardest thing about making pizza is … getting the pizza off the peel and onto the stone in the oven. That’s what takes the most finesse and practice. It’s a precise wrist-flip thing.

The first big concert that I went to was … Beck, at the Trocadero in 1994. I was 17, and we drove down from Lancaster, where I grew up. I remember that during the set break, he came into the audience and handed out sandwiches.

My very first job was … as a grounds-keeper at a hotel/resort in Lancaster. Eventually I went to work at the restaurant there, because that’s where all the girls were working, but it was terrible.

I moved to Philly … to brew beer at Yards. I was there for three and a half years. And I was a bartender at Tria, and while I was there, I would go to New York a lot and try all the pizza places while I was also having pizza parties at my house. Pizza was a hobby that turned into a vocation.

The menu at the new restaurant … consists of small plates — including Cantabrian anchovies, which are the best anchovies in the world — and salads, roasted vegetables, and basically the same pizza menu as at my old place. Oh, and soft-serve.

I like to play … poker with my friends. And Yahtzee. I don’t play games like Scrabble. I have a bad vocabulary.

One thing you should never put on pizza is … chicken. It gets so dry, because the chicken is already cooked when you put it on there. It’s not like you’re putting raw chicken on pizza.

My favorite spot to take a walk in Philly is … Old City. You can walk four continuous blocks on cobblestone without touching a paved street. I go from the noisy craziness of Fishtown to a part of town that’s hundreds of years old, quiet and serene. Especially at three in the morning.

My last trip out of the country was to … Mexico City, last year — a tasting trip for something I can’t talk about. Well, the Suraya guys are opening a Mexican restaurant. But that’s all I’ll say. And before that, a whirlwind four-week trip to Europe. It was one week too long.

The most overrated pizza in Philly is … Lorenzo’s. It’s the worst.

If I could open another pizzeria anywhere in the world, I would open it in … Tokyo. People are like, “Do it in D.C.,” and I think, “Fuck you.” And New York doesn’t need another pizzeria. Actually, Los Angeles could use a good pizzeria. I’d be open to that idea.

When somebody says they want to open a restaurant, I tell them … work at the best place that does what you want to do for as long as you can.

But I secretly think … why?

Published as “One of Us: Joe Beddia” in the April 2019 issue of Philadelphia magazine.