Three Signs Philly Is Getting Serious About Street Safety

A few years ago, it seemed like a stretch for the city even to get on board with a Vision Zero safety plan. This month, the initiative is making serious strides. 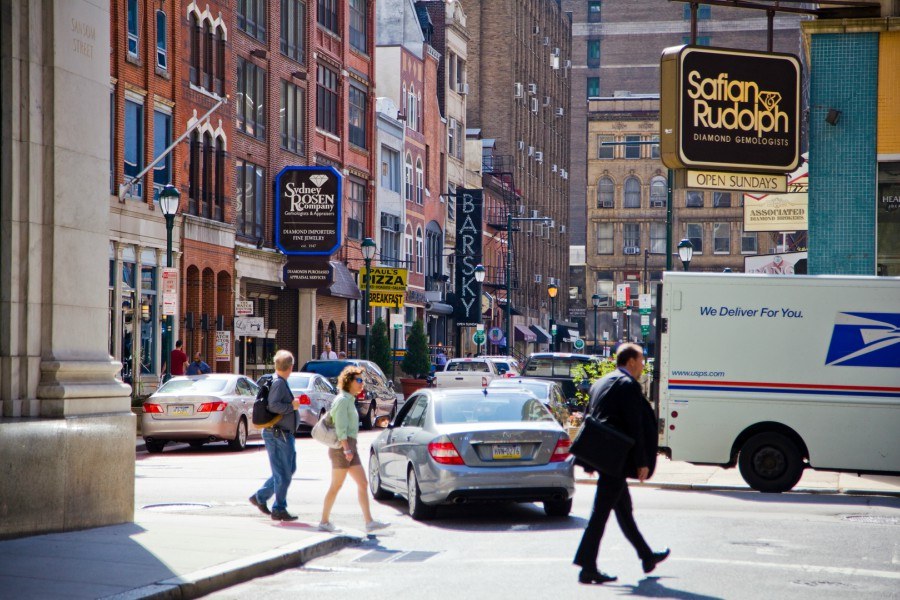 Philly took three big steps toward the goals of Vision Zero this month. | Photo by M. Edlow for Visit Philadelphia

Back in 2015, some of us were doubtful that Philadelphia officials would support something like Vision Zero, a Swedish-born concept that cities can prevent traffic fatalities by emphasizing street safety through better road design and planning. Despite Philly’s alarming rate of traffic deaths (97 the prior year), smart street design didn’t seem like a priority, especially when you looked at the number of lives lost to issues like homicide in that same year (248).

But more and more, residents (especially younger residents and activists with the Bicycle Coalition of Greater Philadelphia) framed traffic fatalities as preventable tragedies and demanded policy changes. And two years later, under Mayor Jim Kenney, the city formally adopted its own Vision Zero plan, proclaiming a goal to rid the city of traffic deaths by 2030.

Roughly one year later, officials say the initiative is making our streets safer. And this month, the city took three big steps toward advancing its goals. (We’ve come a long way since 2015.)

All three recent measures come in the form of City Council bills. The bills would allow for speed cameras on the dangerous Roosevelt Boulevard, permanent protected bike lanes on two of Center City’s busiest streets, and a new class of civilian officers to monitor traffic safety. Here’s more info.

Last week, 9th District City Council member Cherelle Parker introduced a bill to authorize speed cameras on an infamous, 11.75-mile stretch of Roosevelt Boulevard in Northeast Philadelphia. The cameras would be permitted along a span of the road between Ninth Street and the Philadelphia County Line, where 8 percent of the city’s total fatal and severe injury crashes occur, according to PennDOT, and where 21 people were killed last year. Several red light cameras are already located along the roadway.

It’s a notable success for street safety advocates who have long pushed for speed cameras there — the Bicycle Coalition, Vision Zero Alliance, and Latanya Byrd, a resident who lost four family members in a 2013 crash on the Boulevard. Last year, the Pennsylvania legislature approved a plan allowing the city to install the cameras.

Parker said the cameras could help to get motorists to “change their behavior and slow down …. We can reduce crashes and save lives.”

If passed, the city could see between seven and 11 speed cameras on Roosevelt Boulevard before the end of the year.

The protected bike lanes were installed in spring 2018 as part of a nine-month Vision Zero pilot project. They stretch from 15th to 20th Street on both Market Street and John F. Kennedy Boulevard, two of the Center City’s busiest roads. Nine months after the bike lanes’ implementation, the city found that they led to a 12 percent decrease in speeding vehicles and a 21 percent increase in bike riders along the roads. Plus, officials said they did not create a measurable impact on driver travel times during peak morning and evening traffic periods (which was perhaps most essential to getting the project permanently approved).

This is a major win for cyclists. The implementation of protected bike lanes on two of Philly’s busiest, most iconic streets sends a loud-and-clear message that the city is getting serious about prioritizing road safety. The fact that one vehicular travel lane will be removed as a result also says that officials are open to the idea that urban streets shouldn’t always prioritize cars over pedestrians, cyclists, and public transportation.

City Council moved on another Vision Zero-linked bill this month, sponsored by Clarke and Council member Bill Greenlee. The legislation proposes an amendment to the Philadelphia Home Rule Charter that would establish a new class of civilian officers, called “public safety enforcement officers.”

The officers would support the Philadelphia Police Department in regulating traffic, including during special events. The Philadelphia Tribune reported last week that if the resolution is approved, city managing director Brian Abernathy would determine details regarding the officers’ duties and deployment. The civilian officers would not carry firearms, and they would not be permitted to arrest anyone.

Clarke’s thinking is that if civilian officers can save police officers from worrying as much about traffic and quality-of-life issues, the cops can instead focus on pressing matters and more serious crime.

If the resolution passes City Council, voters would see it in the form of a ballot question in the May primary — and they would have the final say. If voters approve the amendment, there would likely be a one-year period to determine the officers’ budget, operations and authority level, according to the Tribune.

The bill was cleared for a final Council vote this month.